Artemych. Soaring in the saddle 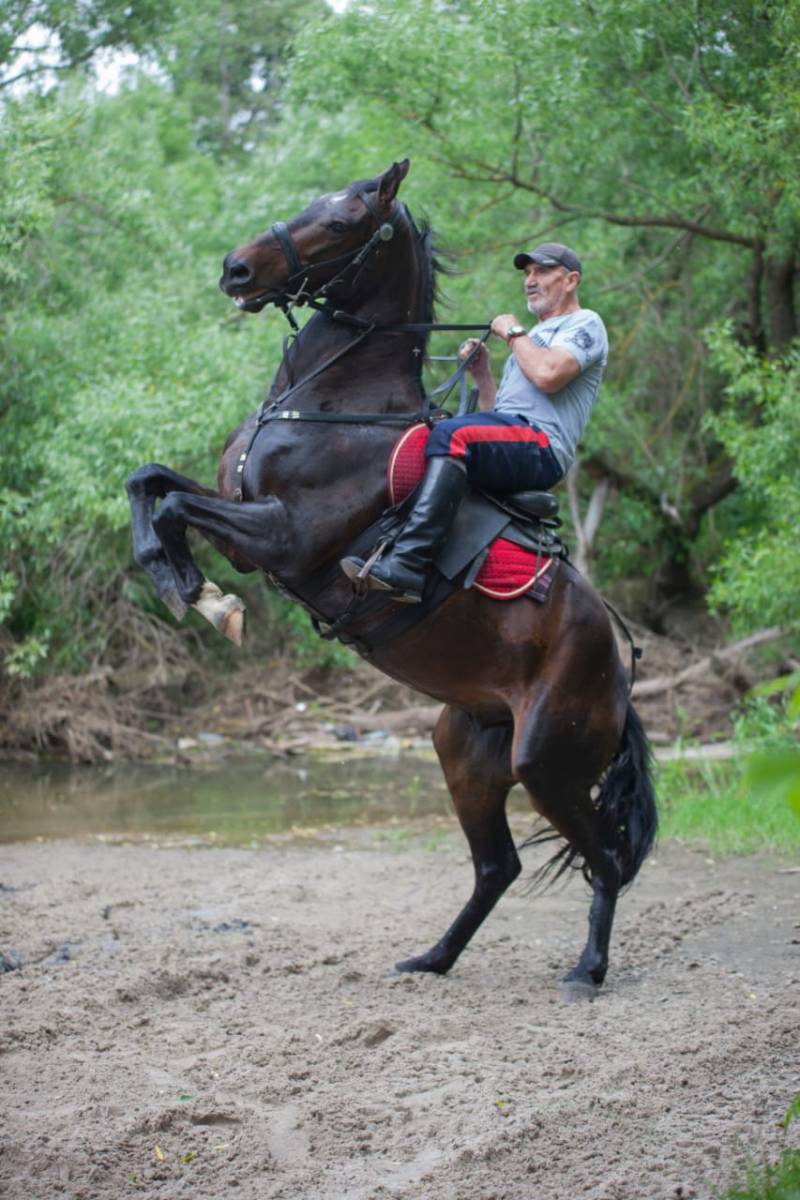 Not so long ago, a creative evening of a man who was killed a thousand times in forty years of work in the cinema took place in the Moscow Cinema House. It was blown up, drowned, shot point-blank from all kinds weapons, chopped with swords, sabers, sabers, scimitars and shafts, stabbed with peaks, thrown from horses, thrown under a train and burned alive.

But he survived. Because stuntmen are required to survive in any situation. Otherwise, they will not receive a fee. So, get acquainted - stuntman and stunt director of the Guild of Stuntmen of the Union of Cinematographers of Russia Evgeny Artyomovich Bogorodsky.

Among his own, he is simply Artemych. Not so long ago he had an anniversary. His life contained so many adventures, experiences, shocks, emotions and losses that others would have had enough for ten lives.

For the first time, a stanitsa boy from the Salsky steppes, Zhenya Bogorodsky, encountered Moscow stuntmen on the set of the film “Look for the Wind”. The film was about the Civil War. According to the plot, the bad guys, the White Guards, wanted to steal the tribal stanitsa herd abroad, and the good Red Army soldiers wanted to leave it in Russia.

The parties sharply disagreed. The film was replete with trick riding and horse tricks. The world-famous equestrian Usen Kudaibergenov was the commander of the stunt group. Before the start of filming, in front of the eyes of the entire troupe, he flew on a horse across the steppe, showing several tricks.

At that moment, Bogorodsky struck like lightning. He could not take his eyes off this impromptu show - he looked, as if spellbound. And since Zhenya was not deprived of strength and dexterity (he had been doing barbell for many years), he immediately asked for a team of stuntmen. They jokingly suggested that he pass an exam - to curb the most obstinate stallion in the herd.

Eugene jumped into the saddle with a run. Enraged by such impudence, the horse rushed from its place, as if undermined, wanting to throw the uninvited guest at a gallop. And literally in a couple of minutes the rider and the horse turned into a dot on the horizon. And then the dot disappeared. Half an hour passed.

- Well, that's it, a guy was killed somewhere in the steppe, - the stuntmen began to worry. - We joked badly. The horse must have thrown him out of the saddle. And he could add with a hoof. No matter how he killed it. Now he will jump alone, and the whole team will go to the steppe - to look for the poor fellow ...

Imagine their surprise when the fugitives returned to the base at a measured trot, and the test subject sat proudly in the saddle, looking down at the slightly stunned spectators. 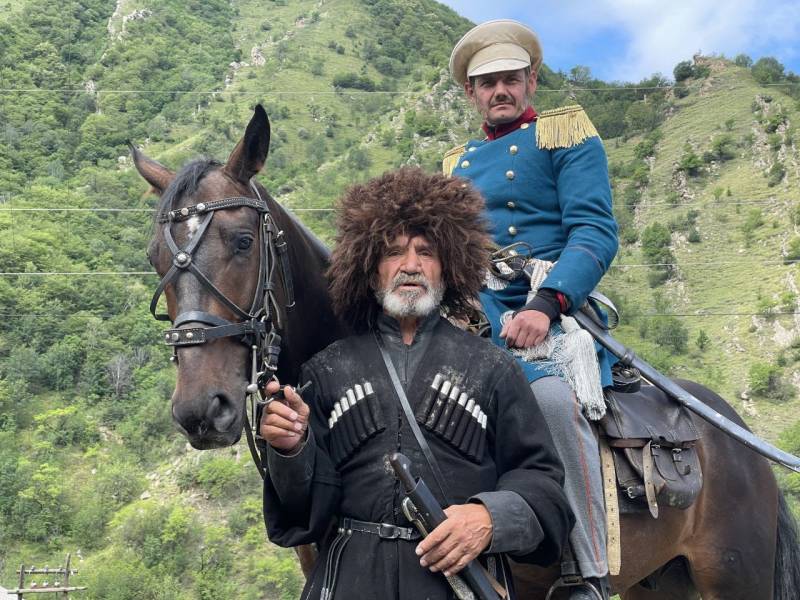 By "unanimous vote" Zhenya was accepted into a group of tricksters. And a fairy tale began for him. He was both “white” and “red”, rushed across the steppe like a madman, jigged for his own pleasure, flew out of the saddle at full gallop and jumped into it, rolled over with the horses and the cart, participated in the chase and left the pursuers.

- What, today the fairy tale is over for me? - bitterly asked the young stanitsa horseman of the director Vladimir Lyubomudrov.

"I'll help you," he promised, obviously taking a liking to the young stunt daredevil. “Wait for a call from Moscow.”

And he kept his word. Soon, Evgeny received a call from the Gorky film studio to shoot the film "A Squadron of Flying Hussars." There, a boy from the Salsky steppes performed new tricks. And a completely different life began for the young stuntman, full of emotions, adventures and experiences.

He took part in hundreds of paintings, saturated with extreme sports. More than once at full gallop flew out of the saddle. He did thousands of tricks - he fell at full gallop from horses, under horses and together with horses, jumped out of windows, passed through walls, flew through doors, fell under a train, burned, exploded and drowned.

He worked with stunt coordinators in China, America, Georgia, Kazakhstan. He staged entire horse shows and theatrical performances. During filming in Kazakhstan, he had to fall from a height of seventeen meters from a suspension bridge into a raging river.

Not just a stunt

It was a number worthy of the world-famous master - the same Usen Kudaibergenov. He, too, at one time jumped with his horse into the river from a cliff twenty-eight meters high. This trick was immediately listed in the Guinness Book of Records, and no one has been able to repeat it so far. 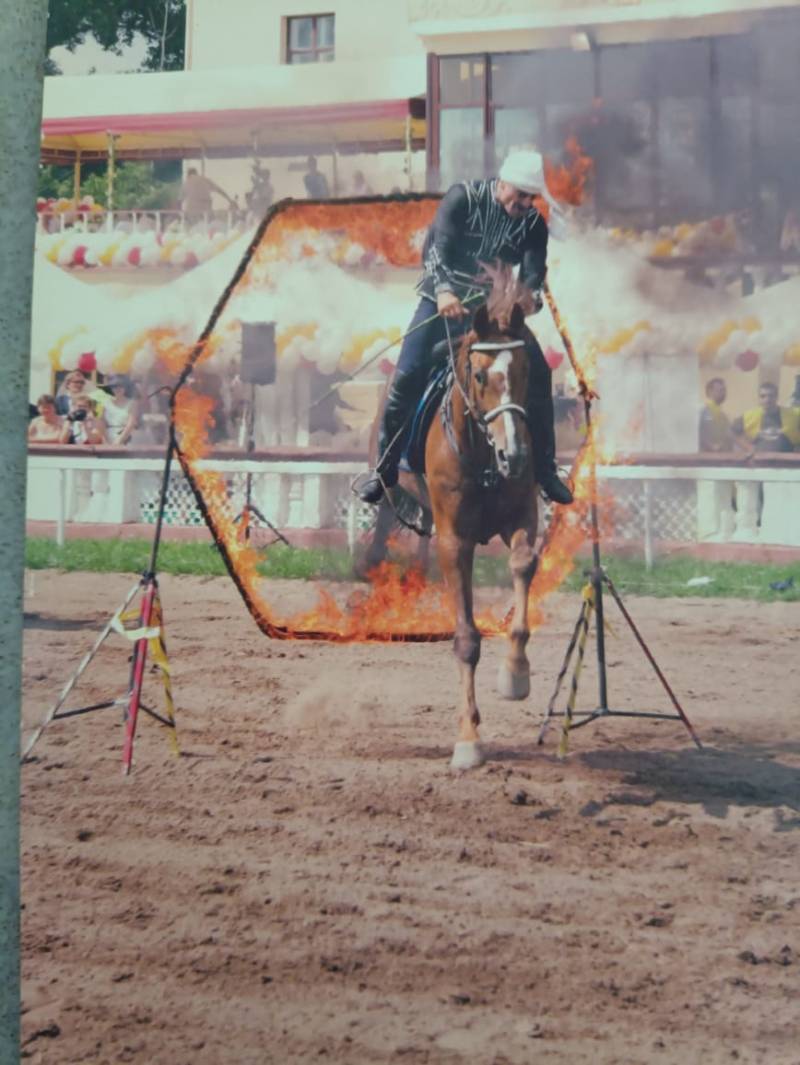 At the height of the fight on the bridge, the Chinese ran into Bogorodsky with their peaks and pushed the horse into the water along with the rider. And the stuntman, together with his horse, flew into the mouth of a seething whirlpool.

It was the flight of a plowshare with a horse. The mane of the horse and the skirts of the rider's robe fluttered in the air. The main danger was that the horse could roll over in the air and cover the rider with his whole body in the water.

It was necessary to pull the legs out of the stirrups in time and push off a little from the horse, so as not to be buried under its mass. And you had to fall into the water higher than the horse downstream, so that he would not run into and knock you down in a whirlpool. All these puzzles had to be solved in the air, in free fall. And make the right choice.

The fall into the water went well. A fountain of spray shot up into the air. Surprises began already in the water itself. The stuntman began to sink. A heavy quilted flannelette robe and boots pulled him to the bottom. I had to get rid of both...

The stuntman climbed ashore already without state-owned props. But alive. And two steps away from him, the horse was already peacefully nibbling grass. He surfaced long before the moment of saving his rider. And then, as usual, a tense dialogue between the stuntman and the props took place - how to write off the property of Kazakhfilm that had sunk in the river.

Props are generally a separate sore subject in the life of a stuntman. On it after all always try to save. And the stuntman can get sideways. At one time, Bogorodsky starred in America in a film by Rodion Nakhapetov.

According to the scenario, he was supposed to fly out through the glass door during the brawl. The door was chosen, of course, the cheapest Bogorodsky catapulted into it three times. The first time he bounced off her like a ball. After the second throw stuck to the glass and stacked down like a wet autumn leaf. And for the third time, he flew through, showered with a hail of fragments, and cut all his veins. Almost said goodbye to life.

Such is the fate of the stuntman. You don’t know what trick she will throw out during the next trick you performed.

Stunt performer and stunt coordinator Evgeny Bogorodsky recently turned 70 years old. He has a golden set of awards from the Guild of Stuntmen: "For the best horse tricks", "For contribution to the profession". There is even a Golden Fang award for working with animals.

Artemych himself was injured many times on the set - these are the inevitable costs of the profession. It's good that he survived. But in the process of performing the tricks prepared by him, not a single horse was injured. This is also a sign of professionalism. And philanthropy, if you like.

He has already grown a galaxy of followers. They put on their own shows. But Artemych is still in the saddle and is still ready for the most dizzying trials.

“God did not give man wings, but gave him a horse,” the maestro of tricks throws up his hands. - Well, how can I not fly after that?