Why do Americans need a missile defense base in Europe

November 7, 2012
43
Prior to the US withdrawal from the Treaty on the limitation of missile defense systems from 26 in May of 1972 of the year, which happened on 13 in June of 2002, this country could deploy missile defense facilities (bases of interceptor missiles) only on its territory, like radar stations to track ballistic targets and for their recognition, as well as for aiming and targeting weapons Missile defense Now these restrictions do not work, which the United States immediately took advantage of, coordinating with the governments of the Czech Republic and Poland the program of deploying a third European missile defense complex on their territory in addition to the two others being created in North Dakota and Alaska. The Americans dream of planning to intercept Russian intercontinental ballistic missiles (ICBMs) on the upstream leg of their flight to the target, and not on the outgoing, as was possible before 13 June 2002 of the year.

From the territory of Russia, Russian ICBMs will fly in the ascending part of the flight trajectory with a slowdown until they reach an altitude of about 1000 km at a distance of up to 5000 km from the launch site. At the same time, their speed will gradually decrease as they climb from about 7 km / s to 4 – 5 km / s. And the speed of the GBI interceptor missile at the end of engine time can reach 7,5 km / s for the two-stage GBI-2 stage and 8,5 km / s for the three-stage GBI-3 stage. And there is no better way to intercept than on the catch-up course, since the rate of convergence will be in favor of the US missile defense system. That is why the United States is striving with its missile defense base to Central Europe and have serious intentions not to leave there under any circumstances.

What is the media silent about?

In publications on the subject of American missile defense, there is no most important, most vulnerable element of the system - the pair points of radio control and radio communications of interceptor missiles and their homing heads that are part of the IFICS secret system (In-Flight Interceptor Communications System).

According to the US missile defense management programs, seven pairs of IFICS fixed sites should be deployed by the number of missile defense zones in the United States and other countries. Each stationary item is located in a deserted area, occupies a plot of non-forest land area of ​​one acre (40 acres). Service positions with transmitting and receiving devices, as well as a parabolic antenna with a diameter of 19 feet (5,8 m) are located at the position of the point. 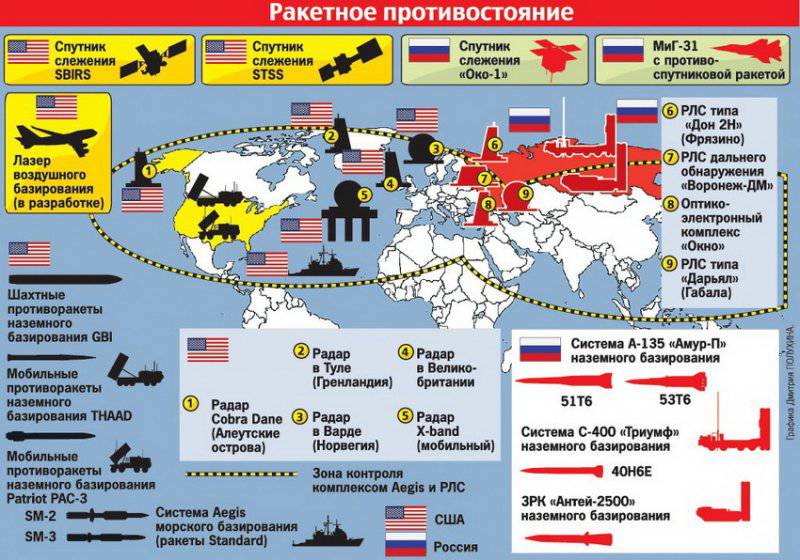 Communication with regional missile defense command posts and the central command post of NORAD (defense of the airspace of North America) is carried out via a global network of ultra-wideband digital channels of fiber-optic communication.

The presence of two IFICS points separated by a considerable distance from each other is due to the need to ensure reliable operation of the radio control system and radio communication in difficult meteorological conditions (rain, fog, snow, etc.), which affect the propagation of radio waves of the centimeter and millimeter waves, as well as for increase reliability in case of failure of one of two points.
Such a detailed description of the elements of the IFICS system was made due to the fact that over the past five years, the seal of the United States, Russia and other countries did not even mention the existence of this system, although without it none of the rest of the missile defense system has the technical capability for accurate missile guidance. interceptors on a ballistic target.

The absence in recent years of mentioning the very existence of the IFICS system can be explained by two reasons. The first is the simplest and most primitive - the United States does not want to indicate the country and the specific location of the two radio control and communication points - the most important vulnerable elements of the missile defense system. The second reason is that if IFICS locations are not supposed to be deployed in Central Europe, then the GBI missile launchers in Poland cannot solve the missile defense problem. Therefore, they are intended for other purposes.

There may be two such goals. The first is the interception and destruction of Russian military spacecraft launched from the Plesetsk cosmodrome in the Arkhangelsk region. And there is no better place for this than the north-east of Poland. The second goal is strategic facilities in the territory of the Russian Federation right up to Novosibirsk. In this case, the GBI-3 stage missiles can perform the role of medium-range ballistic missiles when launching a distance of 5000 km.

It should be noted that the use of the GBI-3 stage as a medium-range missile is very dangerous for Russia, since it provides the minimum time from the moment of giving the order signal to launch a GBI to a nuclear target destruction. Ammunition in this case may have an equivalent in 50 – 100 kt in TNT equivalent. The flight of a GBI missile from Poland to Moscow will take only 11 minutes, the same distance to the bases of the ICBM of the Strategic Missile Forces near the village of Vypolzovo and the city of Teikovo; 13 minutes to the city of Tatishchevo, 15 minutes to Nizhny Tagil and 21 a minute to Novosibirsk. Neither the United States nor its allies have other means of delivering nuclear weapons that are capable of accomplishing the tasks of preemptive nuclear missile strikes in such a short time.