How did Western expansion begin? 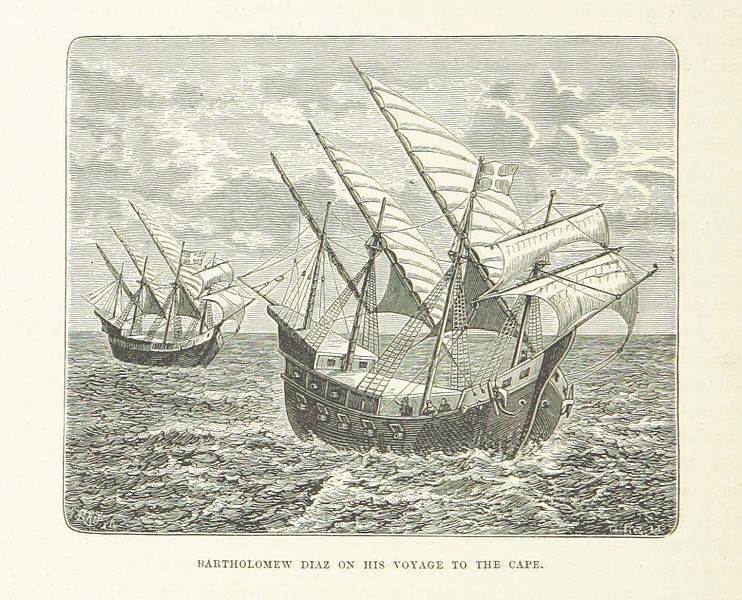 They called this process beautifully - "great discoveries", the spread of "civilization". because history written by Westerners themselves. It was somehow ugly to call yourself predators, robbers, pirates and slave traders.

Decay of the Catholic, Western World (The Renaissance and the Decay of the Western World) coincided with the start of a successful western expansion. The so-called Great Geographical Discoveries. At the first stage, they were carried out under Catholic slogans and with the direct patronage and interest of the Roman popes.

It should be noted that this is not the first time the Western world has expanded, trying to rob and seize foreign lands. Ancient Rome did this, creating its great empire on the blood and bones of neighboring civilizations, peoples and tribes. This slave-owning matrix was also inherited by the second Rome - the papal throne, which claimed "universal" power.

Catholic Rome quite successfully mastered most of the territory of Europe, expanded to the North and East. Suppressed and almost "digested" the Celtic civilization, destroyed the Slavic world in the center of Europe ("Slavic Atlantis" in Central Europe). For example, almost all ancient cities and villages in Germany, Austria, parts of Scandinavia are former Slavic-Russian settlements and villages. Few now remember and know that there were no Germans, no Danes, no Austrians, no French, but there were already Russians. And they had writing, faith, "a country of cities." Developed spiritual and material culture.

Rome was able to crush and assimilate the western branch of the Rus during the centuries-old bloody battle. Some Slavic-Russian clans became "Germans" - dumb, having lost their language, history and culture, others retained their language, part of the culture, but adopted Catholicism and became enemies of other Slavs (for example, Croats and Poles). Many have gone east. In particular, the genus Rurik-Falcon.

But the eastern branch of the Rus survived. She created her own empire. The pressure on the East was repelled. The Crusaders were also unlucky in the south. Moors-Arabs-Saracens fought back. The crusaders plundered the Middle East and Byzantium well, but got away.

The Western world, without an influx of fresh blood, ideas, gold, quickly decayed. Then the Roman throne, as the custodian of the remnants of the knowledge of ancient civilizations, allowed the "discoverers" to find new worlds and tribes across the Atlantic, in Africa and Asia. They called this process beautifully - “great discoveries”, the spread of “civilization and progress”. Because history was written by Westerners themselves. It was somehow ugly to call yourself predators, robbers, pirates and slave traders. 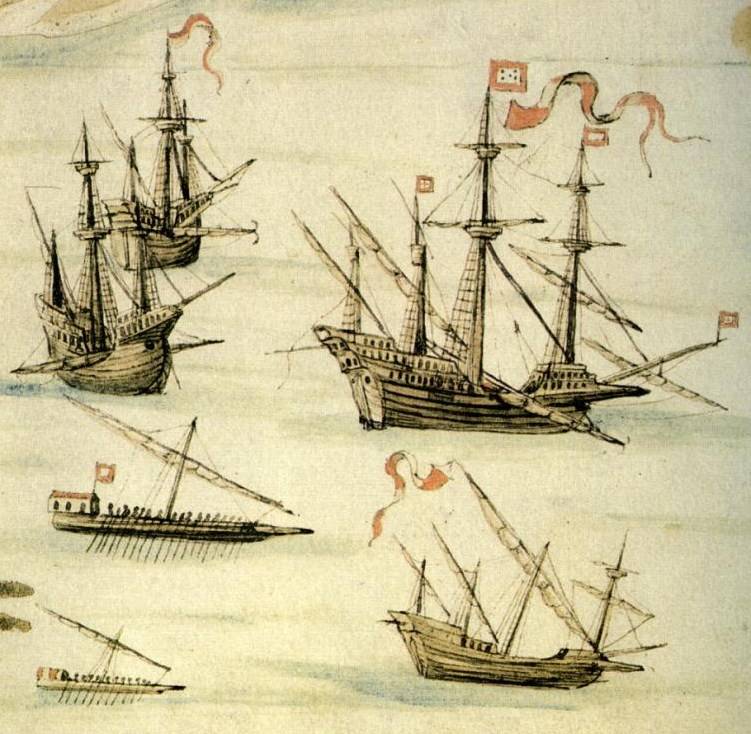 Juan de Castro. Portuguese carracks, galleon, redonda caravel and galleys during an expedition to Egypt in 1540.

The Portuguese were the first to create their colonial empire. Portugal was limited by strong Spanish kingdoms and could not develop expansion towards Europe. There were strong Muslim opponents in northern Africa. The only way to make capital was the sea. Their main occupation was piracy, the robbery of the trading cities of North Africa. In the wars with the Moors, Portuguese sailors adopted the ability to build caravels, to handle navigational instruments - a compass, an astrolabe.

In 1415, the Portuguese captured Ceuta, a city on the northern coast of Morocco directly across from Gibraltar, from the Arabs. This city became an outpost for the Portuguese to advance along the western coast of Africa. Since 1419, the Portuguese prince Henry the Navigator (1394-1460) began to actively equip expeditions to Africa. First, the Portuguese mastered Madeira ("Forest Island"), the Azores and the Cape Verde Islands.

Moving south along the coast of Africa, the Portuguese discovered that other peoples lived behind the Muslim states. There are less protected and developed places where you can land, plunder or trade profitably, if you cannot immediately subjugate the local peoples. The Portuguese quickly realized that information is power and wealth. They did not want to share with anyone and, with the help of Rome, they established their monopoly.

In 1452, Pope Nicholas V issued the bull Romanus Pontifex, which confirmed the previously sanctioned right of Christian powers to enslave non-Christian peoples and approved further colonization. It also forbade other Christian powers from encroaching on the rights of the Portuguese in West Africa.

A large role in the colonization of non-Christian peoples was played by the Catholic orders of chivalry, which were headed by the Portuguese kings. The Order of St. Bennet of Avis (Avisian Order), which, after the end of the reconquista, began the "crusades" in Africa. And the Order of Christ, who was the heir to the famous Templars. The residence of the Grand Master of the Order was the Tomarsky Castle, hence the second name of the Order - Tomarsky.

With the growth of the Portuguese colonial empire, the Avis and Tomar crusader knights turned from warrior-monks into colonial landowners.

Slave traders in search of the "land of spices"

It is clear that little Portugal did not have the material and human resources to colonize the vast Africa. In Black Africa, there were also fairly developed strong states - Mali, Songhai, Bornu, Mosi, Oyo, Benin, Nupe, Congo, Luba, Ethiopia, etc. They lived their own lives, had their own economy and armies, fought and traded. Often these were warlike, powerful peoples and tribes that created and maintained their statehood.

Therefore, the Portuguese did not go deep into the continent. They captured the islands, making them transit points and springboards for further expansion. And on the coast of the continent they were looking for areas occupied by less powerful, developed tribes. Introduced by cunning or force, or combined methods. At first they came as merchants, looked around, founded trading posts, exchanged gold, ivory and slaves on the islands of Cape Verde. Conducted reconnaissance and, if possible, became the masters. They pitted the local tribes, supported one against the other, so that they would capture people for them to be sold into slavery.

The Portuguese wanted to get to the main treasures - spices and silk. The roads to the East through the Mediterranean were controlled by the Italians, further communications were under the Muslims, the Ottomans. Therefore, they were looking for a way around Africa. In the second half of the XNUMXth century, Portuguese scouts reached India by land and confirmed that it was quite possible to reach the "country of spices" by sea, circumnavigating Africa.

In 1488, Bartolomeu Dias, in search of a sea route to India, was the first European to circumnavigate Africa from the south, discover the Cape of Good Hope (it was called the Cape of Storms) and enter the Indian Ocean.

At this time, the Portuguese had a strong competitor. As a result of the marriage of Ferdinand of Aragon and Isabella of Castile (1469), the Spanish kingdoms were unified. The Spaniards captured the Canary Islands, exterminating and selling into slavery most of the indigenous population - the Guanches. In 1492, Spain defeated the last Muslim state on the peninsula - the Emirate of Granada.

The militant thugs who had been engaged in war for centuries were left "out of work." Then the Genoese Columbus suggested that Ferdinand and Isabella find a western road to India. During his First voyage (1492), Columbus once again discovered America, thinking that he had reached the "Western Indies" (West Indies). The "development" of America by Spanish predators began.

This caused a serious conflict between Spain and Portugal. The Portuguese pointed to their priority and monopoly to plunder new lands. The Spaniards objected that Portugal's monopoly only applied to Africa. To resolve the dispute, they turned to Pope Alexander VI Borgia. The Pope was a suitable spiritual leader of the West - "the pharmacist of Satan", "the monster of depravity". The head of the Roman church received bribes from both sides and decided everything fairly. In 1493, he divided the globe along the "papal meridian", which lies 100 leagues (about 500 km) west of the Cape Verde Islands. What lay to the west was taken by the Spaniards, to the east by the Portuguese.

This did not sit well with Portugal, who could not lay claim to the lands she had recently discovered to the east of this line. The Portuguese king Juan II entered into negotiations with the Spanish rulers Ferdinand and Isabella to move the border to the west. An agreement was reached in 1494 with the signing of the Treaty of Tordesillas, which divided the world between the two countries. The Portuguese received in the fiefdom of land east of the line passing 370 leagues (1 km) west of the Cape Verde Islands. That is, getting Africa, Asia and the eastern part of America into its sphere of influence (Brazil was discovered by Pedro Cabral in 770). The Spaniards received all the lands west of this line. 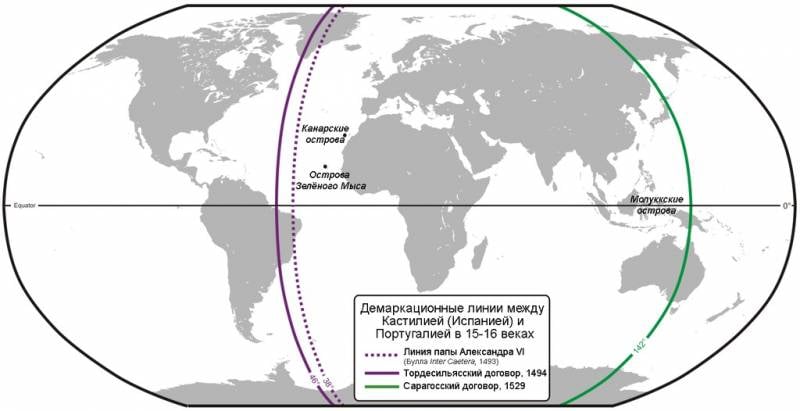 Colonial demarcation lines between Spain and Portugal in the XNUMXth and XNUMXth centuries.