"Big Bertha", who did not shoot at Paris 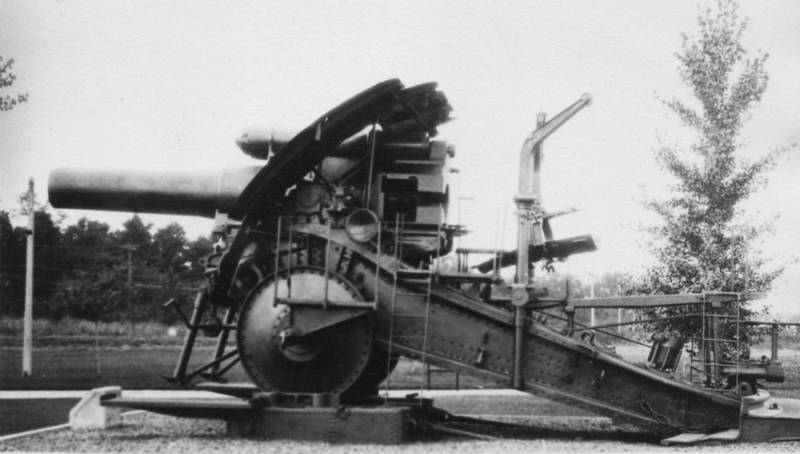 "Big Bertha" at the Aberdeen Proving Ground in the USA

Great praise and he is worthy in the war,
Whoever fights with the enemy in thought is calm;
Calm scolding leads the art of cunning hands,
Preparing fear for enemies and deadly sound.
Without that, courage is heroic,
Nor the firmness of strength, the countless army
Stand against a stubborn enemy.
Here the need requires thunder to reflect,
So that before we, not disgusting, reach us,
And we would crush their regiments into pieces;
And the flame would be enemies in a sudden hour
From the Russian army, without giving birth, it went out.
A. Lomonosov “To the cheerful announcement of superiority
newly invented artillery before the old one", 1760.
German guns of the First World War. "Big Bertha" 42 cm M-Gerät Mörser ("Big Bertha") - perhaps the most famous artillery piece used during the First World War. Today, however, few people understand what "Big Bertha" really was; it is often confused with a number of long-range artillery pieces, including the German 21 cm cannon used to bombard Paris and the 11 cm Austro-Hungarian M30,5 mobile mortar.

In fact, the 42 cm L/12 or M-Gerät gun was a very massive and at the same time mobile 42 cm (16,5-inch) howitzer, specially designed to destroy concrete fortifications.

History This weapon began with the need that arose in the German army for a siege weapon capable of destroying fortifications that blocked the invasion of Belgium and France. Looking for the right one weapons The German army, in collaboration with Krupp, developed a number of large-caliber siege guns, including two prototype 28 cm howitzers (L/12 iR and L/14 iR), three versions of 30,5 cm guns (Beta-Gerät mortar, Beta- Gerät 09 and the Beta iR howitzer) and the monstrous 150-ton 42 cm Gamma howitzer. However, these artillery pieces, each impressive in their own right, lacked the right mix of mobility and firepower, and were paramount in quickly destroying French and Belgian forts.

Then, after about fifteen years of developing siege weapons and just before the war, in December 1913, Krupp introduced a new siege weapon, the mobile 42 cm howitzer M-Gerät. In a combat position, it weighed 42,6 tons, and for transportation it was disassembled into five parts, which could be transported on five conveyors towed by gasoline motor tractors.

The second howitzer was presented to the German army in June 1914. When the war began, both guns were still in the Krupp factory. 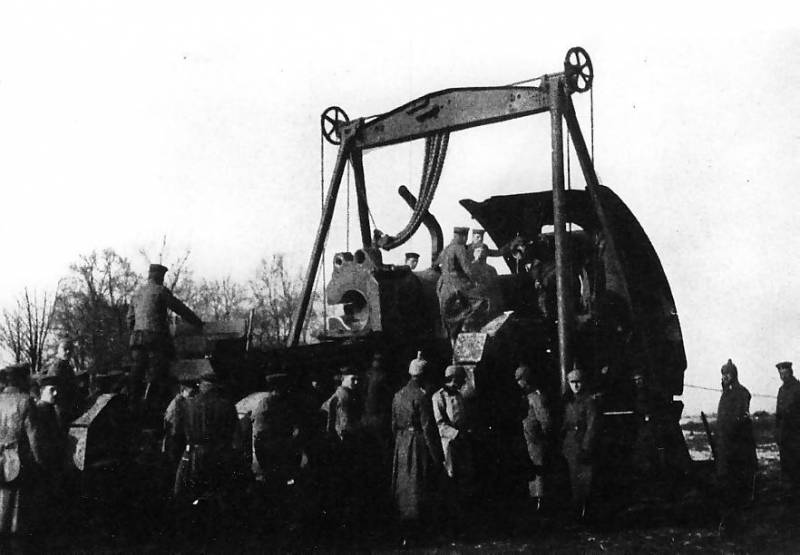 It remains to put on an armored shield ...
After the start of the war, both howitzer prototypes were hastily “brought to mind” and brought into a battery (KurzeMarinekanonenBatterie 3 or KMK 3), after which they were sent to Liege, in Belgium, where they easily destroyed two forts - Fort Pontisse and Lonsin - and effectively completed their siege.

Over the next few weeks, two M-Gerät KMK 3 howitzers, along with other siege artillery, bombarded the forts at Namur, Maubeuge and Antwerp. And it was there that they received the nickname Dicke Berta from their calculations.

During the war, ten more M-Gerät howitzers were produced, that is, there were twelve in total. Production models had several modifications that distinguished them from the prototype guns. Changes included solid wheels, additional crew platforms in front of the armor shield, and a modified breech.

These guns were organized into five batteries and were used on both the Western and Eastern fronts. Moreover, the German offensive near Verdun in 1916 was supported simultaneously by eight howitzers. The Battle of Verdun proved to be a swan song for Big Bertha and the German siege artillery in general. Despite the large numbers, the 42 cm howitzers could not penetrate the reinforced concrete of the modernized French forts, especially the forts of Douaumont and Vaud, which were the main targets for the German army.

At Verdun, two important changes were made to the operation of M-Gerat howitzers and other siege weapons.

Firstly, guns that were outside the range of Allied counter-battery fire, but available for observation from the air, were required to be masked without fail.

Secondly, since the M-Gerät howitzer, like many other German heavy artillery guns, began to explode shells in the barrel, artillery crews were ordered to move away from them before firing. However, this is easily explained: the explosion of such a heavy projectile in the barrel of such a gun was like a real disaster, and their fragments scattered in all directions for kilometers around. 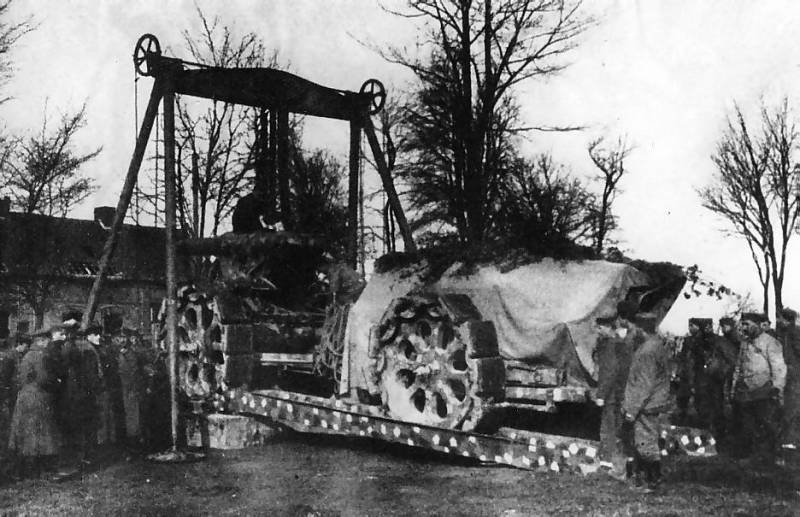 The maximum rate of fire was eight rounds per hour. The howitzer fired three types of projectiles - armor-piercing and high-explosive fragmentation, and later in the course of the war - a "semi-circular" projectile, or Haubengranate, which was designed to increase the maximum range of the gun by reducing weight. 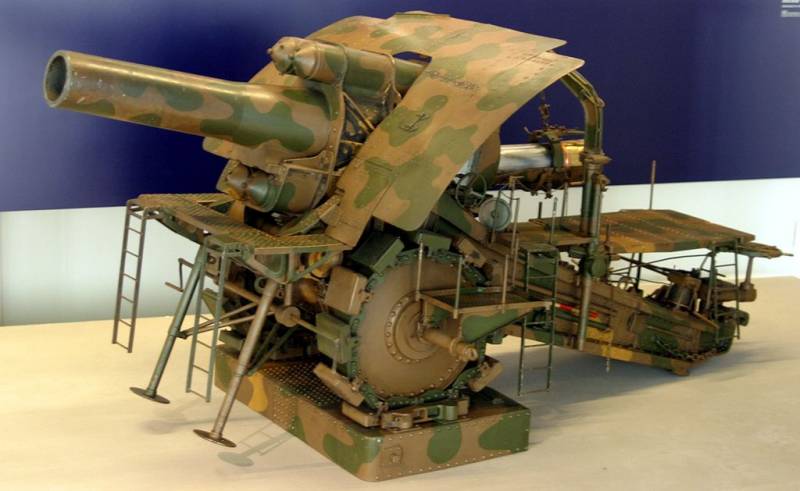 Model of "Big Bertha" at the Army Museum in Paris
The heaviest projectiles fired by M-Gerät weighed 810 kilograms and had enough kinetic energy to penetrate twelve meters of concrete and earth. Funnels from high-explosive fragmentation shells reached 6 meters deep and 9 meters wide. The effect of shelling the permanent fortifications with M-Gerät howitzers is best illustrated by the complete destruction of Fort Loncin in Liege, where a 42 cm shell penetrated the concrete roof of the casemate, hit one of the fort's ammunition depots and killed about 350 soldiers of the fortress garrison.

Studies of captured Belgian forts during the war showed that the shells of the 42 cm M-Gerät and Gamma-Gerät howitzers penetrated concrete fortifications much more effectively than the shells of the same German or Austrian 30,5 cm guns. 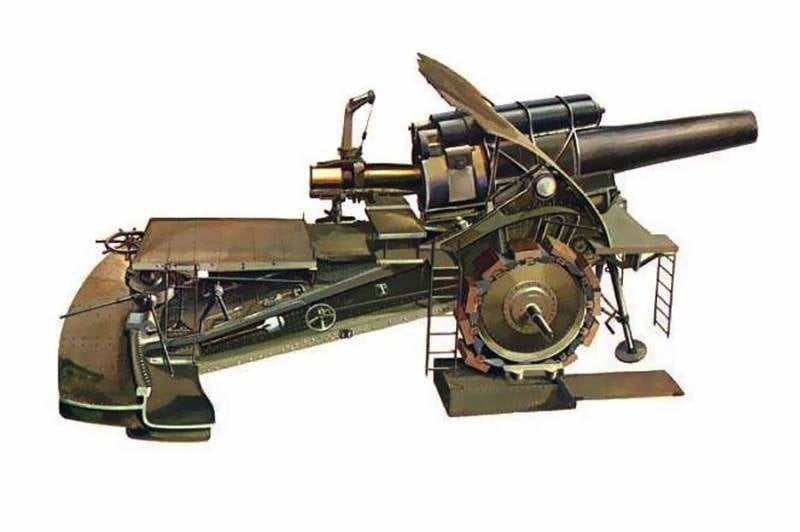 Transportation of howitzer parts did not cause any particular problems. But assembling it required a large gantry crane moving on rails. True, the gun, fully assembled and put on wheels, could be transported further assembled, although not at a very high speed. To increase the cross-country ability and at the same time greater stability of the gun at the time of the shot, the wheels of the "Berta" were equipped with flat "shoes". They also limited the speed of transportation, but on the other hand, the gun could not stall on them even in rainy weather, as well as in autumn and spring. 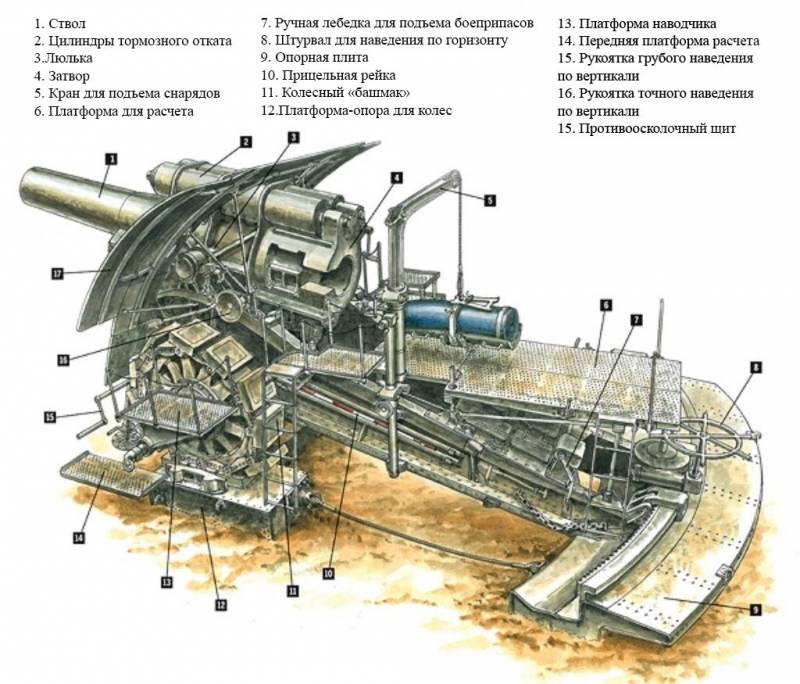 "Big Bertha" in detail
Only two M-Gerät howitzers survived the war. Both guns were handed over to American troops near Verdun shortly after the armistice on 11 November 1918, after which they were sent to the Aberdeen Proving Ground, where they were tested and stored there until one gun was decommissioned in 1942 and the other in early 1950 -s years.

Of course, it was a great stupidity to send these truly priceless creations of the "gloomy Teutonic genius" to the metal, but you can't turn back what has been done.

However, practical Americans thought otherwise, for them this

“... the monster was rather a curiosity ... because in the eyes of the artillery officers of the US Army, it was useless as a field weapon. They ... considered him too inactive, and the US Army already at that time, as now, was guided by a maneuver war.
But, of course, such a weapon today would decorate any military museum and by its appearance alone (and the opportunity to take pictures near it!) Would attract thousands and thousands of visitors!