November 7, 2012
92
The Su-24M front-line bomber is still the main striking force of the Russian tactical aviationbut his days are already numbered. By 2020, the bulk of these bombers will be replaced in combat units with a new Su-34 bomber. The next accident of the Su-24M aircraft, which occurred on October 30 in the Chelyabinsk Region, made us think about the prospects for updating the fleet of Russian front-line bomber aircraft. Currently, the combat effectiveness of this bomber is supported, among other things, by modernization programs, in particular, to the Su-24M2 variant.

Su-24 is a Soviet, and later a Russian front-line bomber with a variable sweep wing. The release of the aircraft in various variants continued until the 1993 of the year; in total, about 1400 bombers were launched. The aircraft is designed to deliver rocket-bombing attacks on the enemy day and night, in simple and complex meteorological conditions, including at low altitudes, with targeted damage to ground and surface targets. As of 2011 year, the average age of this type of bombers as part of the Russian Air Force was 25-27 years. Initially it was supposed to replace 60-70% of these bomber with new Su-34, and the rest to upgrade to the level of Su-24М2, but after a series of plane crashes it was decided to completely write off these aircraft to the 2020 year. Also in 2012, information was published about the complete withdrawal of the Su-24 bomber from the armed forces of the Republic of Belarus. 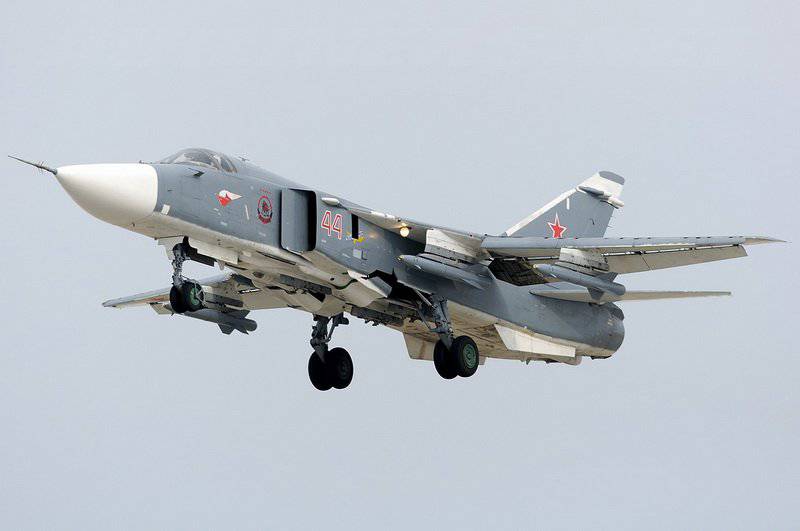 Su-24М2 front bomber
Su-24 was able to reach maximum speed in 1 700 km / h, the combat radius of the machine at supersonic speed is 560 km. The aircraft was armed with a six-barreled 23-mm automatic cannon (500 ammunition), and also had 8 suspension points for guided and unguided missiles, bombs (free-falling and adjustable), additional cannon containers, and also “Fantasmagoria” target designation containers. As of 2012, the year in the structure of the Russian Air Force is up to 224 Su-24 bombers (including 40 Su-24М2). Another 51 aircraft is in service with the Russian Navy.

Su-24 has always been considered quite difficult for piloting a machine, the aircraft has a high level of accidents. Only during the flight test complex was the 14 Su-24 and Su-24M lost. After the adoption of the machine for weapons, the number of accidents with his participation reached 5-6 per year. According to the former Deputy Commander-in-Chief of the Russian Air Force Viktor Kota, at the 1998 year, the Su-24 was the most emergency aircraft of Russian aviation, in total about a hundred combat vehicles were lost.

Modernization of the bombers to the level of the Su-24М2 allows extending their service life by 12-15 years. In the course of modernization, a new navigation system is installed on the aircraft, which, by integrating data from various sources, is capable of ensuring a sufficiently long flight of the machine at an altitude of 30-50 meters (briefly at an altitude of 10-30 meters), as well as avionics. The nomenclature of the weapons used was also expanded, and its system included high-precision weaponssuch as the X-59M and X-31P missiles. According to the nomenclature of the used weapons, the front bomber Su-24М2 is close to its modern changer Su-34. 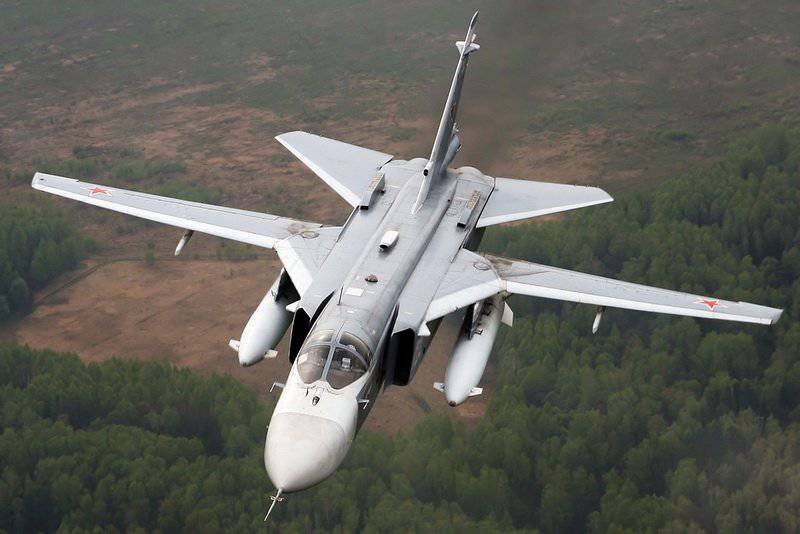 Su-24M front bomber
As a result of upgrading to the Su-24М2 version, the aircraft does not undergo external changes, while inside the bomber, modern compact digital systems and multiplex channels of aircraft belonging to the 3 + generation take the place of the 4 generation. Changed and cockpit, as well as the composition of weapons. When upgrading the machine, the main attention was paid to “pulling up” the front-line bomber to the modern level and extending the period of its use. During the modification, the operational life of the aircraft increases by 15% compared to the base Su-24M, and the combat effectiveness immediately by 30%.

During the modernization of the impulse radar warning of a collision with the ground, "Relief" has undergone a serious revision. Now it provides information on the rounding of the terrain, not only horizontally, but also vertically. Accordingly, to obtain new data, the bomber sighting and navigation system, which received the name PNS-25 Tiger-2, was also upgraded. Modernization of the Tiger-2 sighting and navigation system and the Relief radar made it possible to significantly reduce the minimum altitude of the bomber to 30 meters, and in emergency cases to 10 meters. With a supersonic speed and such a low altitude, the front bomber becomes almost invulnerable to enemy ZSU and MANPADS. It is almost impossible to stop the plane with standard radar systems and to stop it in such a flight.

The Orion pulse-Doppler radar has also been modernized, which now provides significantly more surface mapping capabilities using the 2 mode: the basic average Doppler mode of the beam, as well as the new high mode using a synthesized aperture. That is, to receive a more accurate "map" can be involved channels LTPS "Kaira." In addition, the radar station was built target designation station and radio intelligence, which allows the use of anti-radar missiles without the use of overhead containers "Fantasmagoria." After modernization, the detection range of large sea and land targets of the type “aircraft carrier” or “destroyer” has grown to 150 km, “home” or “bridge” to 90 km, “armored vehicles” to 30 km. The Orion station has a mechanical scan area of ​​elevation + 26 –15 degrees, and in azimuth + –60 degrees. 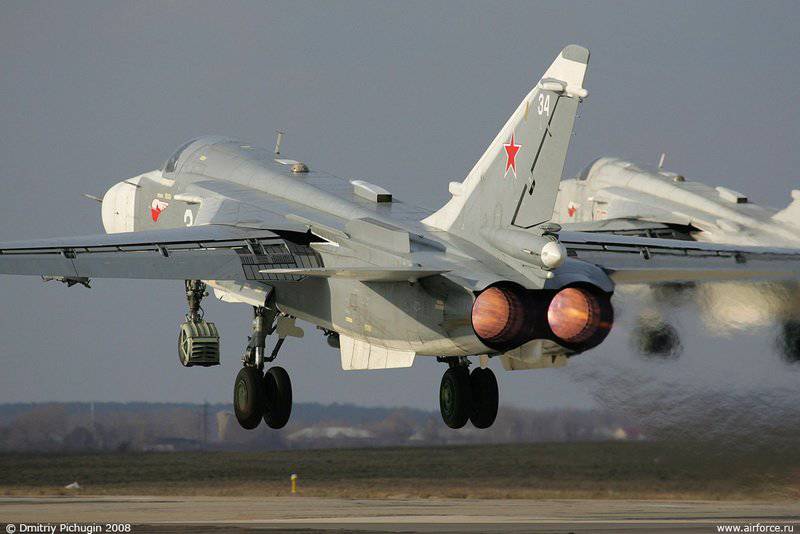 Su-24М2 front bomber
The laser-television sighting station (LTPS) "Kaira" also underwent a significant modernization, the characteristics of the LTPS increased by 30%. It began to use a color TV channel, and the increase in the television channel was brought from 8-multiple to 23-multiple. In addition, it was possible to improve the ability to determine the contours of objects of small-sized targets against the background of rather complex terrain folds. The viewing angle of the laser and television channels in elevation is + 12 -50 degrees, in azimuth + 6 -140 degrees. Modernization of LTPS allowed to ensure the possibility of early recognition and detection of small targets at a distance of 10 km. Modernization of "Kaira" allowed the use of a front bomber against enemy armored vehicles in all weather conditions.

However, the modernization of a rather complicated machine in piloting did not become a panacea. The previous MAKS Aviation and Space Show, held in August 2011, Russian Air Force Commander Alexander Zelin noted that the Air Force hopes to acquire 120 new Su-34 front-line bombers, of which 5 squadrons will be equipped with 24 machines each. This aircraft has already begun to enter combat units - currently 2 contract for the supply of data aircraft. The first of them was concluded in 2008 year. This contract provides for the supply of 32 bombers to the troops in 2009-2013. At present, the Russian Air Force received 16 of such bombers, and by the end of the year, after transferring the next batch from the factory, their number will reach 26 units.

Already in the 2013 year, the implementation of the second major contract, which provides for the supply of 92 bombers to the troops in the period from 2013 to 2020, will begin. At the same time, it is not exclusive that in the coming 2-3 of the year, plans to acquire front-line bombers Su-34 will be adjusted upwards - aircraft of this class are vital for the Russian Air Force. Based on the given pace of construction, it can be assumed that by 2025, the number of Su-34 in the troops can reach 180 aircraft. In this case, they will completely replace front-line bombers Su-24М and М2 in the troops, the most modern of which will be sent to the storage bases. 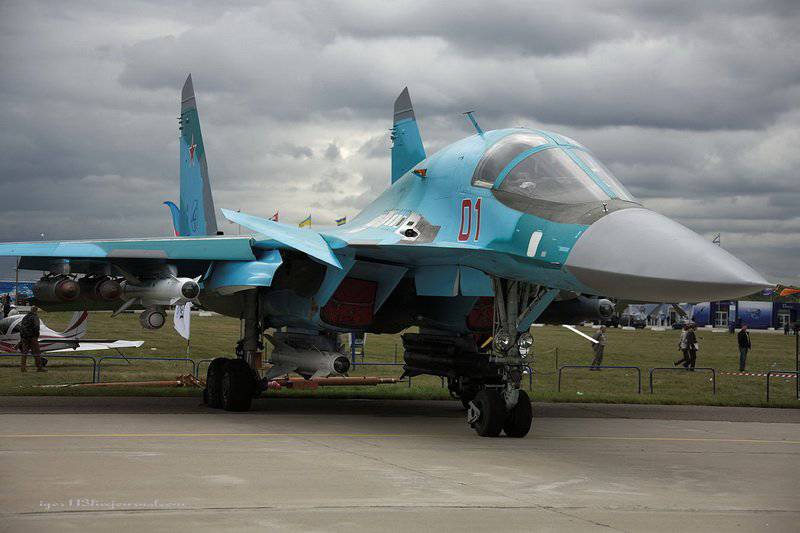 Sukhoi Su-34
If we compare the new Su-34 tactical bomber with its predecessor, it can be noted that the new aircraft has significantly increased capabilities for using high-precision weapons systems (has 12 suspension points), and is also more resilient due to the use of booking vital assemblies. A larger fuel reserve in combination with more economical engines provides the Su-34 a greater range - more than 2 000 km. at cruising speed and over 1 100 km. when flying at supersonic speeds, against 1 000 and 560 km. from its predecessor. With air refueling, the combat radius of the use of the Su-34 increases to 3 000 km, which allows this bomber to deliver bombing strikes from Russian territory to targets in Eurasia, North Africa, and the adjacent seas.