In Kramatorsk, the repair point of the Armed Forces of Ukraine was destroyed along with two American MLRS HIMARS - Ministry of Defense 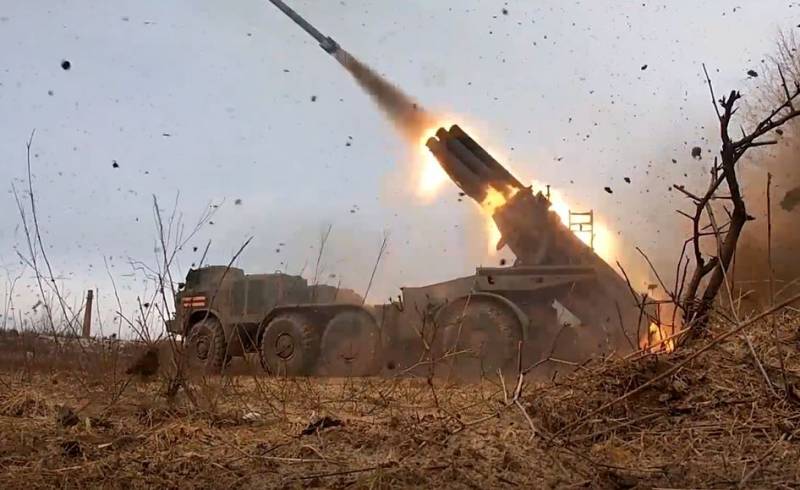 The last day was marked for the enemy by the loss of several MLRS systems, including two US-made HIMARS installations, this is stated in a new report from the Ministry of Defense.


Russian troops continue their offensive in the main directions, this is also recognized in the General Staff of the Armed Forces of Ukraine. In yesterday's evening report, the Ukrainian military admitted that Russian troops were pressing not only in the area of ​​​​Avdeevka and Bakhmut (Artemovsk), but also went on the offensive in the Liman sector of the front.

According to the message of the military department, no massive missile strikes deep into the territory of Ukraine were again launched, Russian artillery, aviation and missile troops worked on the positions and near rear areas of the Armed Forces of Ukraine. Over the past day, as part of a counter-battery fight, two MLRS "Grad" of the Armed Forces of Ukraine were spotted in positions and immediately destroyed. They covered them in the districts of Pervomayskoye DPR and Kamyshevakh of the Zaporozhye region. Three Ukrainian D-30 howitzers were destroyed in the areas of Torskoye, Vodyanoye and Maryinka. And in the area of ​​Georgievka, the position of the American M777 was opened, firing at Donetsk. The howitzer was destroyed.

Our troops did a great job yesterday in Kramatorsk, striking at the point of repair and restoration of armaments of the Armed Forces of Ukraine. The Ministry of Defense does not provide details, but according to available data, including from Ukrainian sources, on Sunday it "flew" three times in the industrial zone of the city and banged there very well. As it turned out, along with the point, ours destroyed the equipment that was being repaired there. The military department announces the destruction of two HIMARS MLRS launchers, two Gvozdika self-propelled guns, five D-30 howitzers and three special vehicles. The Russian military gathered a good harvest. The command post of the 80th Airborne Assault Brigade of the Armed Forces of Ukraine also flew there, 35 airborne officers, including five senior officers in ranks from major to colonel, moved into the category of "XNUMXth".

Fighting continues in the main areas. On Kupyansky near Kislovka, about 20 Ukrainian servicemen, an infantry fighting vehicle and two vehicles were destroyed by artillery strikes. At Krasno-Limansky, artillery worked in the areas of Makeevka and Nevskoye, Terny and Torskoye. Another DRG and a "roaming" mortar were destroyed in the areas of Stelmakhovka and Chervonaya Dibrova. The losses of the Armed Forces of Ukraine in this direction amounted to more than 30 personnel, two armored combat vehicles and two pickup trucks.

In the Donetsk (Artemovsk) direction, ours continue to advance. The Ministry of Defense announces the occupation of new, more advantageous positions and lines. The Wagner PMC reports that in a day they opened and struck at the area in the south-western direction from Bakhmut, where there is a large concentration of the Armed Forces of Ukraine, at night they stopped the attempt of the Ukrainian DRG to penetrate the rear, and in the morning they repulsed the counterattack of the Armed Forces of Ukraine in the Zaitsevo area. The total losses of the enemy per day amounted to 100 military personnel, four infantry fighting vehicles and eight vehicles.

In the South-Donetsk direction, artillery fire and active actions of the Russian troops defeated the units of the Armed Forces of Ukraine in the areas of Vladimirovka, Vugledar, Novodonetskoye and Novoselka. More than 40 Ukrainian servicemen, two armored combat vehicles and three pickup trucks were destroyed.