We need a serious setback 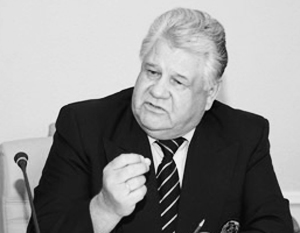 VIEW: Yuri Dmitrievich, what did you think when you learned about the resignation of Serdyukov on Monday?

Yuri Bukreev: The decision on the withdrawal of Serdyukov overripe long ago. No he is not an expert, he absolutely has no idea about what he was appointed to lead. He came to destroy the system. And he achieved it. The army is in terrible condition.

VIEW: What, in your opinion, can be expected in connection with the appointment of Sergei Shoigu to this position?

YB: It is difficult to expect that the political leadership of the country would appoint some completely unfamiliar person for them, since there are obviously many unresolved problems, there are some “tails” that need to be cleaned. Maybe it was rightly said by the president that during the investigation into these unpleasant cases in the Ministry of Defense, the minister should be removed in order to complete the matter and study the situation.

But still, Shoigu is also not a military man, and it’s strange to say that he was in the Emergencies Ministry, he was wearing a uniform. So what if the army general - and there are army generals in the police. This is a completely different work specifics. It is one thing to extinguish forest fires, to deal with disasters, earthquakes. Yes, they need organizational skills, command. However, the service in the Ministry of Defense and the General Staff has a peculiarity: here you need to think about perspective all the time and look to the future for 10, 15, 20 years. But for this you need to know how the armed forces are generally built and developed, according to what laws, you need to know the laws of war, the fundamentals of hostilities, the basics of preparing operations.

This is another area of ​​knowledge, and, of course, you simply cannot come to it with the baggage that Shoigu has. But as an intermediate figure for a certain period, in order to stabilize the situation, I think he will approach both the political leadership of the country and the philistine agree with him. Since the bench in the Ministry of Defense is emasculated, and where is there now to find a person who thinks, able to lead the ministry and the General Staff? An urgent need to create a reserve of officials. They need to be taught and now there is no place to teach!

VIEW: How much time, in your opinion, is it necessary for Shoigu to get up to speed?

YB: From three to five years. The first year is nothing at all; it will only begin to figure out, fly around, get acquainted. In the second year will begin to understand something. The third to fifth years will be the most productive. It can also be left for this term, but then, as mentioned above, it is necessary to divide the functional duties between the civilian minister and the General Staff, as was done in a number of Western countries.

VIEW: And how will the military perceive the new minister? As far as I remember, the arrival of Serdyukov from the very beginning caused bewilderment among the troops.

YB: How did Serdyukov start? He immediately began to trade, to disperse the academy, led and appointed his people to the ministry. If Shoigu will repeat to him ... It has already been announced that the reforms will be continued, deepened. There is no need to continue anything, on the contrary, we need a serious rollback.

If we talk about Shoigu, the officers will perceive his appointment as a continuation of the policy of "betting on civilians." For the rest, everything will depend on what steps he takes.

VIEW: At what first steps can he enlist the support of the officer corps, in your opinion?

YB: Firstly, if he restores the main commands of the branches of the Armed Forces. Now they are destroyed. In each, 90 people are completely powerless, worthless controls.

Secondly, if he drives away from there these women, incompetent, bastards, who hate the officers, with whom it is impossible to solve a single question. Imagine, now, as they say, in the breaks at the collegium of the department there is a queue for women's toilets more than for men’s. Women's battalion of some kind.

And, thirdly, if he restores military education. Now it is destroyed. Since September 1, all the academies have switched to a ten-month course. Exactly such a period was given to the factory schools in the post-war period, when they were taught for the most primitive specialties - locksmith, bricklayer, etc. Now there will be ten months to teach the officer to work in the operational and strategic levels of management. And in the Academy of the General Staff taught for ten months, and in ordinary academies.

If Shoigu takes at least these three steps, he will immediately be supported.

Much depends on who remains in the General Staff. If the General Staff continues to hang out like this, nothing good will come of it. I do not think that Makarov (the chief of the General Staff, Army General Nikolai Makarov - approx. VIEW), a military man, made such decisions. They twisted his arms and forced him to do what he did. He is not a strong-willed person, weak-willed, could not resist, was afraid to leave and did what this minister said.

VIEW: Who should the new minister rely on? In recent years, very many officers have been dismissed from the ministry and the General Staff.

YB: This is the worst problem. Now the affairs and the scale of personalities in the military leadership are incommensurable with those that existed before the nineties. There is no such level of people as then. This is largely due to Serdyukov, he dismissed all the military. I served in the Turkestan military district for a long time and all the time I remember one local proverb. Uzbeks say: “Ishak, who has walked in the shade, will never work in the sun”. The main thing is that the chief of the General Staff should get such that he has his point of view.

VIEW: Do you think Makarov will not remain in his current position?

YB: In theory, it should be removed immediately. He had to know everything, inform the leadership. With his position he has many sources, he probably knew about these outrages. But he "lay down" under Serdyukov and carried out his will. He should have known that corruption, theft, and fraud are flourishing, that housing for officers is not built in the places where they serve, but where it is necessary that the academies are being driven out of the capital — there is no one to protect Moscow now — and are being transferred to peripheral cities. He had to ask for an audience with the president, he was the second person in the Ministry of Defense, he appointed his president. And he had to clearly report this situation.

Makarov's wines as a military man and that everything was destroyed during the reform. He had to resist. What, he does not know that divisions can not be transformed into brigades on our vast territory? That the brigade is two and a half times less in combat capability, that it cannot carry with it supplies, ammunition? He does not know that now they are talking all the time about constant-readiness brigades, and there they serve for one year, they cannot be trained for a year, and the brigades are formally listed as combat-ready, but are soldiers not really trained?

VIEW: In connection with the appointment of Shoigu to the post of head of the Ministry of Defense, opinions have already been voiced that he has practically created a working structure.

YB: This is not true. Until the middle of the 90s, we had a powerful civil defense system, which, as a rule, was headed by one of the commanders of the district forces with the rank of deputy defense minister for civil defense. And this structure had its troops. What is the difference from the current sham Emergencies Ministry - Civil Defense had mechanized battalions, regiments and brigades armed with cranes, excavators, earth-moving machines, etc. They were fully staffed with soldiers, sergeants, officers, were prepared, had to speak on any team and coped well with their affairs. After 91, it all fell apart.

The Ministry of Emergency Situations has a feature that the average man does not know about. Why I know well, because when I headed the Main Headquarters of the Ground Forces, the Main Command of the Ground Forces was entrusted with the task of the country's territorial defense. Periodically, we developed a plan of territorial defense of the country and every year conducted exercises with two or three districts. We have always attracted regional structures of the MES. My deputy, Lieutenant-General Mikhail Somov, then went to Shoigu as deputy engineer and equipment for these same mechanized battalions, which were transferred to him from the Armed Forces. And when he went to check them, he was horrified: they were all dismantled, sold out and disfigured.
To date, there are no troops in the Ministry of Emergency Situations. There are only regional offices. That is, there is a general in every subject of the Federation - there are so many generals there, that all the norms are exceeded - which has nothing behind the soul. They are all based on the resources of municipal and local self-government bodies, and the general only commands and rules. Just a very well developed system of popularization of the Ministry of Emergency Situations and Shoigu. Last year, ten days of television, the tambourine was one and the same: the Emergencies Ministry sends assistance to Serbia. They say a month what Shoigu is ordered, and they are bringing a thousand blankets. It is nothing, it is a drop in the sea. The same with their "Centrospas". "The earthquake," Centrospas "flew two IL-76." And its capacity is 15-20 units. “These are rescue dogs” - they will show one dog. I already recognize these dogs by their faces. A dozen dogs spinning in front of the camera, no one got anything. Thousands of people are killed, one, two, three saved. They will say: "The IL-76 plane brought a wounded boy to Moscow for an operation." On the roads, hundreds of people die every day. Why show this boy? Yes, because there is nothing more to show.

To say that Shoigu created something from scratch, it is impossible, and this was not close. He did not stand at the origins, everything was created for him.

VIEW: Nevertheless, can his previous ministerial experience be in demand in the military?

YB: His experience as an organizer and leader is useful if Shoygu is an honest and decent person to the depths of his soul. If he is honest with himself, he will defend state interests, with his experience in leading people, he will be able to do something in the next three to five years.