Union of Free Social Republics. We are from the USSR

Not everything is so hopeless

At the end of last year, VTsIOM conducted a survey as part of the 30 Years Without the USSR project, which showed that the majority of Russians surveyed (82%) know how the abbreviation USSR stands for, 18% could not name the Union of Soviet Socialist Republics. Correctly answered the question 94–95% of citizens of the older generation and only 59–60% of young people.

Who is to blame for the fact that our children do not even know the name of the great country in which their parents grew up? Only themselves. However, absolutely sprinkle ashes on your head is not worth it. According to many studies, the attitude of the current young generation towards the USSR is very positive.

Moreover, a significant part of them consider the Soviet era the best in stories our state. And this, by the way, is typical not only for Russia, but also for many former Soviet republics, where it is imperative to play the anti-Soviet card - almost the norm for any advanced politician.

Of course, time retouches historical ulcers. Parents, originally from the USSR (not counting the noteworthy liberals), in conversations with children about the past, most likely did not focus on the distortions of collectivization and the tragedies of the builders of the White Sea Canal, on the lines for green sausage and torn tights, replacements for which could not be bought.

As a rule, young people learn from the older generation about the important and unique things that happened in our lives during the years of the USSR. The Great Victory, the construction of new cities and the construction of thousands of factories, Gagarin and the greatest scientific discoveries, the Bolshoi Theater and amazing culture.

But there was one more thing, perhaps the most important thing, that young citizens of Russia feel in the stories of their fathers and grandfathers about life in the USSR. This is an invaluable sense of confidence in the future, a sense of justice, albeit not guaranteed in everything and everywhere, and a sense of social security and need for one's country. 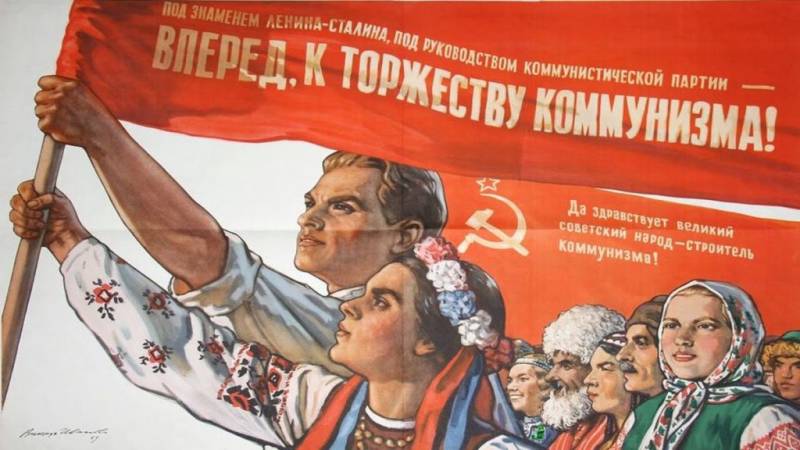 Young people, although not all, alas, also know about the feeling of pride that we experienced, understanding what influence our country had in the world. No matter what anyone says, it was the Soviet Union that actually forced Britain, France and other colonial powers to abolish modern slavery in their overseas territories.

It was we who protected many peoples in Asia, Africa and Latin America from American neo-colonialism. There is no doubt that, looking at the USSR, many Western states were simply forced to introduce certain guarantees of social and legal protection of workers.

The best people in the world

And the citizens of the Soviet Union firmly knew that man is a brother to man - regardless of skin color, nationality and religion. We were brought up that way from the cradle. And although some people had so-called everyday nationalism in their souls, we considered such people to be marginalized, and they could not achieve anything worthwhile in our, Soviet life.

Today we see how our former brothers are ready to kill just because you are Russian, Ossetian or Armenian. The disease of rejection of "strangers" after the collapse of the USSR turned out to be so contagious that it was caught in almost the entire post-Soviet space.

And the local elites not only did not fight this epidemic, but also encouraged its spread in every possible way. Cave nationalist instincts have become for them the perfect tool to achieve their selfish interests.

The baton of the disastrous fragmentation of the post-Soviet space along ethnic lines was picked up by our Western "partners" gleefully rubbing their hands, generously providing money to all those who advocated "complete independence from Russia."

It is thanks to the concerted efforts of local tsars and their foreign sponsors that the collapse of the USSR is so abundantly washed and washed in blood.

And now we have reached the last line. In fact, the NWO is a struggle not only for the security of Russia, but also for interethnic peace in the former USSR.

I am sure that when we win, the Central Asian bai will immediately turn their tails, quietly encouraging the Russophobic attacks of local nationalists. Pro-Turkish Azerbaijan will calm down in its appetites. The shots in the triangle Kyrgyzstan-Uzbekistan-Tajikistan will be silenced.

Russia, as has happened more than once, will become not only a guarantor of calm, but also a center of attraction for most of the peoples in its environment. Of course, if we can offer something to people whose fathers and grandfathers lived with us for centuries in friendship and harmony, died shoulder to shoulder for the common Victory and jointly restored the country from ruins.

History has convincingly proved that real unity cannot be formed only along ethnic lines. Today, there is a lot of talk about the unification of the Russian world, while, of course, the stipulation is made that the community of people of different nationalities with the same cultural and historical code is meant.

The idea seems to be attractive, but it seems to me that, relying only on the past, it is hardly possible to build the future. Signing treaties a hundred years ago to join the USSR, the peoples of Central Asia, the Caucasus, Ukraine and Belarus saw in Russia not only protection, but also a completely new social perspective.

The proposed model of justice, equality and genuine internationalism was so attractive that it outweighed all nationalist and small-town interests.

If we ourselves here in Russia can build at least a prototype of such a state, then there can be no doubt that in the near future the Union of Free Social Republics will become a reality. And it doesn't matter what form it takes.