Creation of new types of aerosol curtains. Realities and perspectives 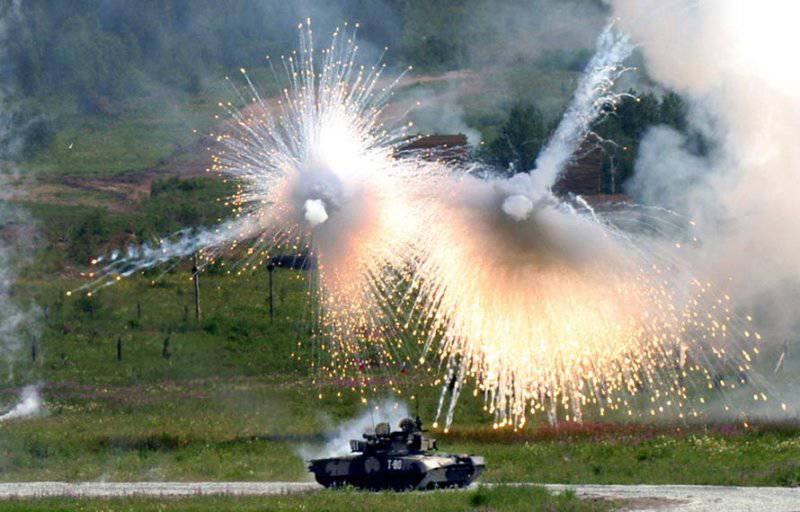 Means aerosol curtains are not very impressive on the background of rockets and guns. They have no particular military romance, neither destructive power, nor innovation. But at the same time, all such funds helped save more than one soldier’s life and successfully conduct a large number of operations.

Most armies of the world successfully use special equipment - from camouflage to the most real “invisible cloaks”, and this is done with a single goal - to remain invisible to the enemy as long as possible, thereby confusing him.

After World War II, the development of camouflage curtains began in many countries of the world. In those years, smoke curtains were used extensively. However, this did not mean that only smoke was used. There were also liquid aerosols, that is, mixtures consisting of very small droplets. The idea of ​​creating a liquid aerosol curtain belongs to the American veteran Alonzo Patterson, who came up with the idea of ​​evaporating oil using hot gases. When they mixed with cold air, the oil produced a thick white mist, condensing into tiny drops.

Smoke curtains were also used by Soviet troops during the war. So, during this period more than 500 rear objects of special importance (mainly infrastructure) were masked with the help of fumes, which helped to keep most of them intact. German pilots simply could not consider a single goal. Of course, to argue that only thanks to the smokescreen managed to save these objects is not entirely true, but it was of great importance in the process of protection. For the installation of the smoke screen during the war years, ARSs were used, Tanks T-26, OT-133 and OT-130.

In 70-ies, work on the improvement of aerosol protection was continued. The experience accumulated over time has shown that the use of this kind of masking to a large extent reduces the loss of human resources and equipment even in cases where the enemy uses highly accurate weapon. As for the present period of time, the role of aerosol curtains has increased many times. Hope is now placed on this defense for effective cover from radar surveillance, enemy fire control, and counter reconnaissance using infrared and laser technology.

The first types of weapons that used thermal homing appeared in the 50s of the last century. Therefore, after some time, the US military were forced to seek means to hide the heat, and thus protect themselves from weapons operating in the heat range. The results of the search were clouds of metallic dust, or, as they were called differently, aerosol curtains. This protection is used to this day, but the main problem is that it is extremely difficult to control. In addition, it adversely affects the environment.

This was the main reason why the military decided to allocate thousands of dollars to 100 for three companies to develop more appropriate remedies. These companies are Physical Sciences, Nanotrons and Lynntech.

Most of the major military equipment, in particular, aircraft and tanks, has infrared radiation, which makes them "defenseless" in front of homing missiles. A spray curtain will provide an opportunity to hide these objects. Such protection is installed quite unexpectedly. So, according to John Lennhoff, a representative of Physical Sciences, to block infrared radiation, all you need to do is blow up a grenade filled with bronze powder next to the object you want to hide. This will dissipate or absorb infrared light. Thus, the object will become invisible to the means of thermal homing.

Currently, during the creation of an aerosol curtain, the most commonly used particles are metal, mainly bronze, which are the most accessible. But the difficulty lies in the fact that the dimensions of these metal particles are not the same, which makes it impossible to control the curtain. In addition, as stated by the military themselves, these particles remain suspended for a long time in the air, which can cause serious health problems for soldiers in the area of ​​the curtain.

Representatives of the Environmental Protection Agency add to this that a surplus of the main component of bronze - copper - in drinking water in a short period of time can cause stomach problems, and with longer use of such water a person is provided with serious problems with the kidneys and liver. Therefore, the main task that is put before the companies is the creation of a completely new type of aerosol curtain, which would give the opportunity to effectively protect troops and equipment, but at the same time would be safe for the human body.

At first glance, the idea of ​​safe invisibility may seem unrealistic and even absurd (something from the category of myths and fairy tales). But in fact, the first steps to this have already been taken. And the most interesting is that the authors of the new tool are ... Iranians. About a month ago, in one of the Iranian editions, it was reported that the unknown Iranian inventor had invented some kind of tool, which was called “fraudulent spirits”. It helps to hide the smell of gunpowder, which could give the presence of Iranians to the enemy, located in the movement of air masses. Moreover, it was argued that this invention is extremely useful in the event of a sudden attack.

It will not be amiss to recall the British magician named Jasper Maskelyn, who managed to create a light "copy" of Alexandria during the Second World War, where the headquarters was located fleet Great Britain. He fully recreated street night lighting in Alexandria, while extinguishing the lights of a real city. Thus, the Nazis spent a lot of time and effort destroying the fake city. The day after the operation, the British used canvases with painted funnels from the explosions, so that German intelligence assured the success of the operation ...

It should be noted that, for example, in Ukraine, the fight against infrared radiation is in a slightly different direction. So, here was created a camouflage system for the protection of equipment, called the "Contrast". During the tests, it was found that the design is able to reduce the range of capture with a high-precision target weapon by about 9 times. In addition, "Contrast" makes it possible to reduce the visibility of technology in the infrared, radar and thermal ranges.

In addition, in order to reduce visibility, other means are used, in particular, shielding the chassis and the roof of the power compartment, special coating, which reduces visibility in the radar range.

In Russia, the Shtora complex is actively used, which is installed on T-80UK and T-90 tanks. He warns about laser irradiation and protects equipment from missiles such as Milan, Dragon, Tou and Hot (puts up active interference), as well as systems with passive-guided laser missiles like Kopherhed, Hellfire, and Lahat (establishes multispectral aerosol curtains that neutralize laser radiation). In addition, the complex can also find a laser emitter, but also attack it. But at present, Curtain cannot perform the full range of tasks, because the range of laser waves has changed significantly.

The military has been working on the problem of reducing thermal radiation technology for more than half a century. As a result, some aircraft use false heat targets, which are fired and distract the missiles towards themselves, exhaust systems use smoke cooling before ejection. But to say with confidence that a fully universal system has been created that can fully absorb infrared radiation today, no army in the world can.