Political conspiracy around the crash near Smolensk

November 7, 2012
54
More than 2,5 years have passed since the tragedy near Smolensk, when the main board of Poland, on which the president of the country and dozens of top government officials were, suffered a disaster. It would seem that hundreds of examinations were carried out with the involvement of specialists from different countries, hundreds of images of the tragedy site were taken, data from flight recorders were used, dispatchers from Smolensk-Severny airport were interrogated, and this means that it’s time to put an end, but this as it turned out, does not fit in with the interests of the Polish opposition. The data on difficult weather conditions in the morning of 10 on April 2010 of the year, as well as on the presence in the cabin of the liner of unauthorized persons who put pressure on the decision making by the crew of the Polish Tu-154M, as a result of which a terrible tragedy occurred, are not impressive for those who persistently seek some anti-Polish conspiracy. 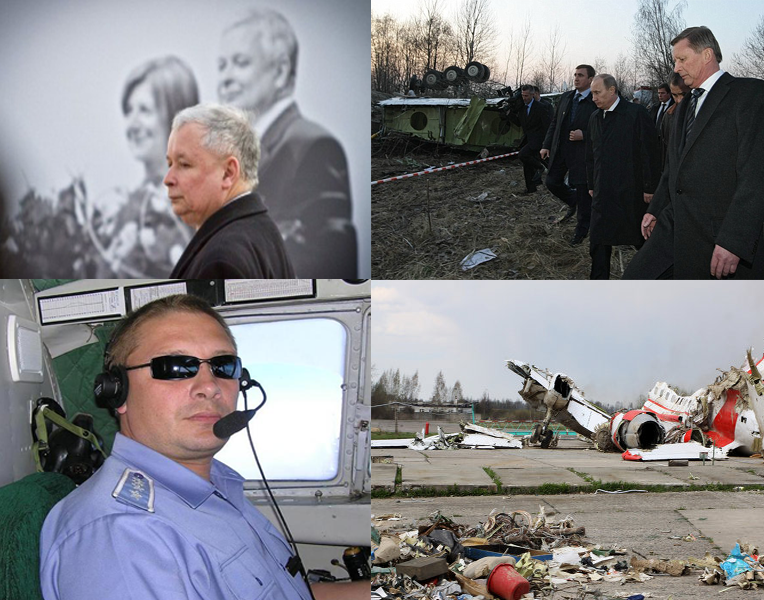 Not so long ago, several scandals involving the tragedies of the Polish aircraft with a representative delegation on board flared up. At first, photos of the bodies of the victims of the Smolensk tragedy appeared on the Internet, which shocked the public. This was the reason for claims from Warsaw to Moscow. According to representatives of the Polish side, only the investigative bodies of Russia could publish the scary pictures of the remains of the dead. This had to be answered by the staff of the Investigative Committee. According to their statements, the RF IC has photos from the scene of the tragedy, but none of the volumes of the criminal case contain those photos that appeared on the World Wide Web.

Both sides strongly condemned those who decided to throw in an information bomb in the form of published images, and the press service of the Investigative Committee of Russia reported that operational investigative actions are being taken to find those people who decided in a very vile way to outrage the memory of the victim of the Polish air force accident board number XXUMX.

And the searches were crowned with success. It turned out that the Altai blogger Anton Sizykh published scary pictures. He himself said that he simply reposted the photo from another blog - the blog of journalist Tatyana Karatsuba. According to Sizykh, he published a photo in order to prove that there was no plane crash near Smolensk at all, and the death of representatives of the Polish authorities occurred in Poland in general. Talking about the tragedy near Smolensk, the Poles started to get the maximum benefit from the new accusations against the Russian Federation. As they say, no comment ...

However, if in this case both sides quickly reached a consensus and did not continue to exaggerate this topic, then the situation turned into a much more complicated one. A real thunder from the blue sky thundered at the moment when in one of the most popular Polish newspapers, the Rzeczpospolita, a material appeared suddenly that explosive media were found on fragments of a Polish airliner crashed near Smolensk. For obvious reasons, this led the Poles to a state of real shock. After all, if there were traces of explosives, then it turns out that an act of terrorism occurred in the sky above Smolensk ... However, after a few hours, Polish newsmen had to take the words about "explosives on fragments" back. It turned out that this is monstrous misinformation, which could finally spoil the already not entirely positive relations between Poland and Russia.

Meanwhile, information about the alleged traces of explosives on the crashed liner quickly spread around Poland and, despite the fact that journalists confessed to misinformation, many representatives of public organizations and other media outlets decided to call for the creation of a new international commission to investigate the sensational case. One of the main ideologues of the endless succession of investigations involving additional forces and means is the brother of the deceased Polish President Lech Kaczynski - Jaroslav Kaczynski. This gentleman with enviable persistence continues to ignore the conclusions of several commissions at once about the causes of the Tu-154 accident in April 2010. According to Jaroslaw Kaczynski, not a plane crash took place near Smolensk, but a murder ... On this basis, the main opponent of the current Polish President Bronislav Komorowski demands the immediate resignation of the Cabinet of Ministers, the top of the Prosecutor General’s Office, allegedly hiding a certain “truth” about the catastrophe. For supporters of the conspiratorial version of the fall of the Polish aircraft near the Smolensk-Severny airport, such words of Mr. Kaczynski are an incentive to spread the data about the “Russian track”.

There is no doubt that Yaroslav Kaczynski’s grief can be understood, but all his attempts to re-fuel an unhealthy interest in the catastrophe are more like a desire to receive personal political dividends on exaggerating pseudo-facts about the death of his brother, his wife, and 94 people who were 10 on April 2010 of the year. ill-fated board.

The death of one of the key witnesses in this sensational case was another factor that sparked the interest of the Poles in a plane crash on the first side. In the late evening of October 28, 2012 was found in the basement of the house by Remigiusz Mus, the flight engineer of the second Polish aircraft, who was sent to the mourning events dedicated to the tragic events in Katyn. Mus 10 April 2010 was part of the crew of the Yak-40, who landed without any problems at the airport "Smolensk-North". The official cause of death was suicide, which immediately became the reason for a number of Polish media to state that the death of a flight engineer was associated with the Smolensk tragedy.

It is reported that Remigiusz Mus, along with Arthur Voshtyl, the Yak-40 pilot, who landed in Smolensk about an hour before the tragedy with the Tu-154, was the main witnesses of the case, initiated in connection with the Smolensk plane crash. It is also reported that Mus allegedly heard the dispatcher of the Smolensk airfield allowed the Tu-154M pilots to descend to the height of 50 m, although there was a thick fog above the ground, and there was a forest belt in front of the airfield. According to the data, which are considered official and confirmed by the experts of the commissions, nothing like the record of conversations of the Tu-154 board with the dispatcher in Smolensk does not contain. It turns out that either Remigiush Muss was not telling the truth, or the 2 commissions (IAC and Polish), which managed to overwrite the flight recorders, were immediately wrong ... Naturally, supporters of the “Russian trace” search in the tragedy immediately stated that Muss was telling the truth and therefore he was driven to suicide ...

Meanwhile, the pilot of the most safely landed Yak-40 aircraft, Arthur Voshtyl, said in an interview with one of the Polish publications that he also heard through the communication system talking in the Tu-154M cockpit, but did not hear the dispatcher allow the board to drop to a critical height. Voshtyl says that he himself warned pilots of the main Polish side that the weather conditions in Smolensk had deteriorated sharply, he also states that Tu-154М received the same information from the ground from the dispatcher. Pilot Yak-40 confirms that in such circumstances, the captain of the aircraft itself makes the decision about landing, guided by the operational situation and instrument readings. The crew of the Tu-154M, according to the results of a number of examinations, completely ignore the data from the instruments, as well as the signal from the TAWS system, indicating a dangerous approach to the ground. Moreover, two outsiders, Andrzej Blasik (commander of the Polish Air Force) and director of the diplomatic protocol of the Polish Foreign Ministry, Mariusz Kazana, were in the pilots' office at once. According to Voshtyl, these people could not order the Tupolev pilots to land in any weather conditions, but the recording of the flight recorders makes it clear that the crew literally forced them to close their eyes to all warning signals from both the dispatchers in Smolensk and the instruments of the aircraft and indirectly forced to land in the most difficult meteorological situation. The phrase “If we do not land, they will kill me,” uttered by Arkadiusz Protasiuk (commander of the airborne No. XXUMX), makes it clear that the crew was clearly under pressure.

Everyone knows that President Kaczynski was flying without official coordination with the Russian side, and he chose the Smolensk airfield as the final destination. He was offered several times to get to the venue of mourning events dedicated to the memory of Polish officers who died at Katyn through other airports, which were better equipped, and the weather conditions of 10 on April 2010 were more favorable than at Smolensk. As a result, Kaczynski himself chose the route Warsaw-Smolensk. Apparently, the need to follow this particular route has become a kind of psychological pressure for the crew of the Tu-154M. The pilot was more afraid of the wrath of President Lech Kaczynski than the difficult weather conditions overboard, which led to the terrible tragedy ...

Obviously, stakeholders will do everything to continue to attract unhealthy attention to the events of April 10 2010. And if so, then we can confidently assert that the conspiracy versions, which in no way match either the expert conclusions or the “black boxes” of the Tu-154M, will appear more and more over time. One hour, one of the overly active Polish conspiracy theorists will also push the Russian side forward, as is the case with the shooting of Polish officers in the Katyn forest ... Therefore, you should be ready for this turn of events.