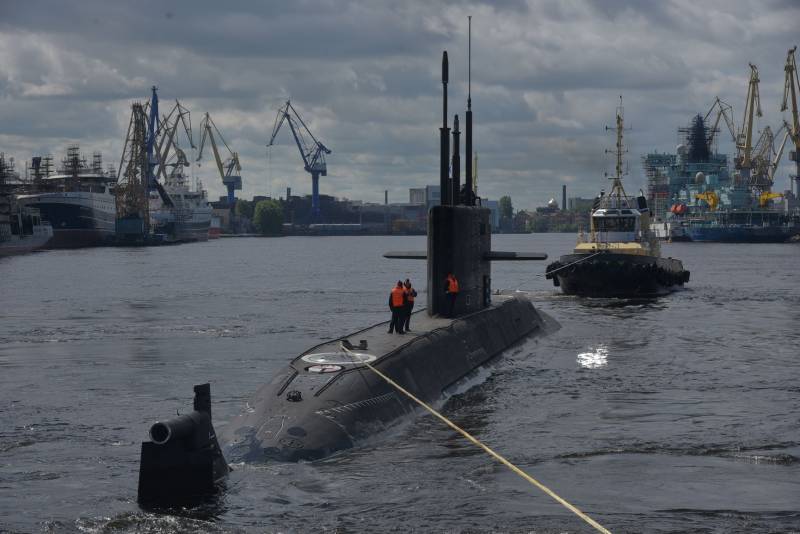 Submarine "Kronstadt" project 677 "Lada" will enter the combat structure of the Russian fleet next year, this follows from the timing of the state tests of the submarine. This was reported by the press service of the Ministry of Defense.


Diesel-electric submarine "Kronstadt" will begin state tests at the end of December this year. Such terms were approved by the Commander-in-Chief of the Navy Nikolai Evmenov. Currently, the submarine is completing, or has already completed, factory sea trials, which lasted quite a long time. Now the submarine should be at the Admiralty Shipyards and is preparing for state tests. There is no exact information about this.

At the end of December this year, JSC "Admiralty Shipyards" will begin state tests of the submarine project 677 - "Kronstadt"
- said in a statement.

The diesel-electric submarine "Kronstadt" is the first serial submarine of project 677 "Lada" after the lead "St. Petersburg". The construction of the submarine turned into a long-term construction, carried out with long interruptions, stops and adjustments to the project. The laying of the submarine took place in July 2005, in 2009, by decision of the Ministry of Defense of the Russian Federation, the construction of the order was suspended until 2013, the launching took place only in 2018. At the end of 2021, the submarine entered sea trials for the first time. According to the shipbuilding enterprise, "Kronstadt" was completed according to the adjusted project, taking into account the trial operation of the lead submarine of the series.

According to the latest information, the Kronstadt will replenish the combat strength of the Pacific Fleet, although it was previously reported that the submarine will go to the Northern Fleet, where it will join the lead submarine of the series. However, all this is still at the level of rumors, so we will wait for the official announcement.
Military Reviewin Yandex News
Military Reviewin Yandex Zen
14 comments
Ad