The heaviest fighting continues in the vicinity of Artemovsk (Bakhmut) and on the outskirts of the city. Evgeny Prigozhin’s telegram channel reports that in Artemovsk, Wagner fighters have to literally move forward meter by meter, capturing every building with battles. At the same time, the Kiev command of the trains is driving more and more new reinforcements into the city, making up for large-scale losses.


One of the commanders of the assault group of "musicians" says that the difficulty of taking Bakhmut lies in the fact that the Russian military has to go down to the city, which is located in a lowland, along a well-shootable slope. Despite the difficulties, some groups are already hooked, the assault on the city will continue until it is completely taken.

Prigogine expressed the opinion in his public that the so-called trenches dug by the Ukrainian military in Bakhmut are not. These are, most likely, communication passages between houses, in which the UAF militants traditionally place firing points. Judging by the footage published online, the trenches are straight, not zigzag, and do not have firing cells.

In the Ugledar sector, Russian troops, after artillery preparation, launched a ground attack in the direction of Prechistovka. The assault on Maryinka continues, here, as in Artemovsk, the Ukrainian garrison is trying to hold every building, fighting is going on on the western outskirts of the city.

In the Seversky sector, the Armed Forces of the Russian Federation again tried to advance towards Verkhnekamenskoye. Russian artillery hit the positions of the Armed Forces of Ukraine in Sporny. Near Soledar, Russian troops continue their offensive, expanding the zone of control around Yakovlevka. On the southern flank, advanced groups of Russian forces drove Ukrainian units from the eastern outskirts of Kleshcheevka. 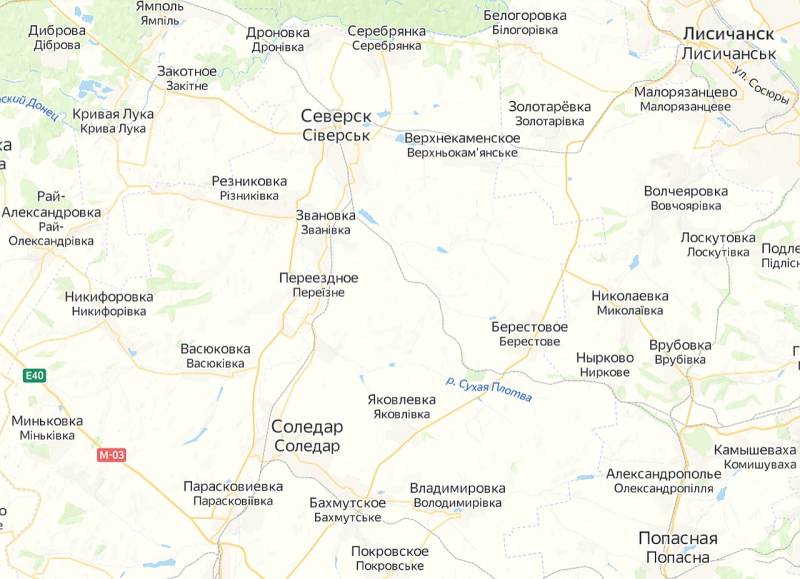 In the Kupyansko-Svatovsky sector, units of the Russian Armed Forces continue to push back Ukrainian formations in the area of ​​Dvurechnoye and Petropavlovka and are advancing in the direction of Tavolzhanka. Fighting continues in the forest near Dibrova.

On the southern front line, without serious advancement on both sides, there are positional artillery duels. Russian artillery hit the enemy's concentration in Kherson.

In the Kharkiv direction, Russian units are conducting assault operations near Masyutovka, which is located 50 km northwest of Svatovo. Our artillery and army aviation worked on units of the Armed Forces of Ukraine in the Kislovka area in the Svatovo-Kremenny direction.

Almost daily reports that the enemy is constantly building up groupings on almost all sectors of the front, allegedly for the offensive, are very similar to the disinformation of the General Staff of the Armed Forces of Ukraine. Its purpose may be to pin down our forces on the defensive in order to prevent the transfer to the hottest areas in the DPR or active offensive operations of the RF Armed Forces.

The Ukrainian General Staff in the morning report confirms the offensive actions of the Russian army at once in several areas in the Donetsk and Luhansk directions, reporting that the attacks of the Russian Armed Forces were “repulsed” in the direction of almost a dozen settlements of Donbass.

If Ukrainian propaganda is to be believed, the Russian command has nevertheless begun to implement a plan to eliminate high-ranking security officials of the Kyiv regime. Acting Chairman of the SBU Vasily Malyuk said the day before that an attempt on the life of the head of the Main Intelligence Directorate Kirill Budanov and Defense Minister Alexei Reznikov had allegedly been prevented. Although, all this may be another PR.