President: the military potential and capabilities of almost all major NATO countries are being used against Russia 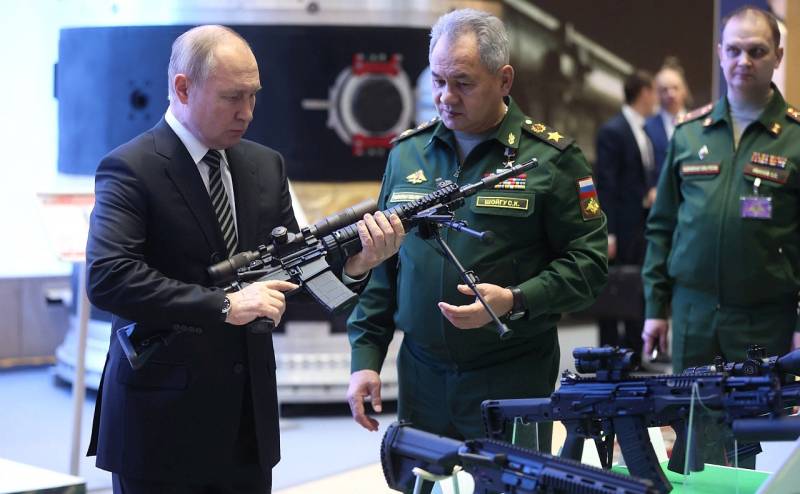 Today, under the chairmanship of Russian President Vladimir Putin, the annual meeting of the collegium of the Russian Defense Ministry was held in an expanded format. The head of the military department, Sergei Shoigu, reported on the progress of the special operation, the number of weapons and military equipment received by the troops in 2022, and the social security of servicemen.


Taking into account the date of the board meeting, it became the final one for this year and the program for at least 2023. Significant theses and statements from the speeches of Putin and Shoigu are already actively disseminated and discussed in the Russian press and social networks. Here is some of them.

In the course of the Ukrainian conflict, Russia is confronted by the entire collective West, NATO resources are used to the maximum. A constellation of more than 500 satellites operates in the interests of the Armed Forces of Ukraine, providing intelligence data on a continuous basis. At the same time, the Kyiv regime uses terrorist methods of warfare and regularly commits war crimes with the tacit approval, and even on the direct instructions of its Western curators.

Nevertheless, our soldiers, sergeants and officers are fighting for Russia courageously and steadfastly.
- stressed the president.

Under the circumstances, Putin said, Russia would continue to strike Ukrainian infrastructure and military targets.

Speaking about the recent partial mobilization, Putin noted that certain problems were identified during it, which must be resolved as quickly as possible. First of all, it is necessary to modernize and digitalize the work of military commissariats. It is necessary to improve the interaction of military registration and enlistment offices with local and regional authorities.

The Minister of Defense, in turn, noting the growing threats from the North Atlantic Alliance, proposed taking measures to create and strengthen the group of troops in the north-west of Russia and increase the number of the Russian Armed Forces to 1,5 million military personnel, including 695 thousand contract soldiers.

In general, a preliminary analysis of the policy statements of the head of state and the minister of defense allows us to conclude that the Russian army is waiting for quite a significant reform, which is necessary due to various shortcomings revealed during the NWO, and because of the growing threat from the United States and NATO.

Next year, the army will receive many different weapons, much more than in 2021-2022, including various UAVs. But an increase in the production of weapons should not undermine the country's economy, it is necessary to look for a balance in solving these problems.

The modernization of the army should take place using high-tech developments, including artificial intelligence. The speed of interaction and decision-making at the horizontal and vertical levels must be accelerated, in combat conditions brought to seconds.

The confrontation with the West in Ukraine can be long, while the course towards achieving the goals of the NWO does not change. There is no point in negotiating with Kyiv in the current situation, primarily because the Western curators of the Zelensky regime do not want to recognize the rights and take into account the interests of Russia.

Putin knows the real numbers of losses in the NVO, but, as he notes, it was no longer possible in another way. The start of the special operation was inevitable, and its results were guaranteed.