The potential and capabilities of the machine gun "Kord" 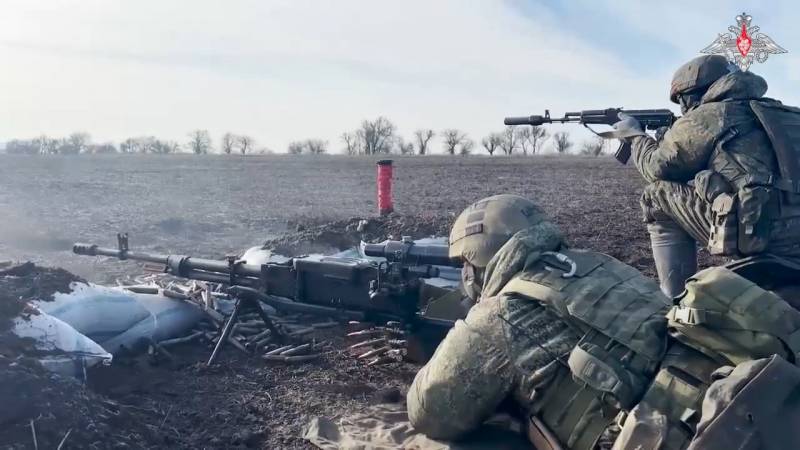 The Russian army is armed with an extensive range of small arms weapons, incl. heavy machine guns. To date, the Kord machine gun has become the main model of this class. This product is widely used on different media and platforms, and thanks to it, various units receive the required combat capabilities. Right now, Kord machine guns are making a certain contribution to achieving the goals of the Special Operation in Ukraine.

Large-caliber machine guns "Kord" are in service with rifle units, and are also used on various armored combat vehicles of the ground and airborne troops. For this reason, weapons of this type have been widely used in the current Special Operation since its very first day. "Kords" regularly appear in various materials from the front and from training grounds.

So, in recent days, the Ministry of Defense again showed machine gunners and their Kordas. On December 19, a video was published from one of the training grounds where military personnel of the Airborne Forces are being trained. At the time of the shooting, machine gun crews were training to prepare defensive positions and use their weapons against the advancing enemy. The interaction of two calculation numbers was also worked out.

To combat the imaginary enemy, infantry machine guns, with a bipod and a butt, were used. In the conditions of the range, machine gunners will acquire or improve the skills of using Kords, and thanks to this they will be able to effectively support other paratroopers with fire in any conditions and operations.

On December 20, the Ministry of Defense showed the use of Kord machine guns on armored vehicles. It published a video from one of the training grounds of the Central Military District, where tankers are being trained. The crews of one of the formations are mastering the recently arrived main combat Tanks T-90M and, in particular, are working out the use of all standard weapons. 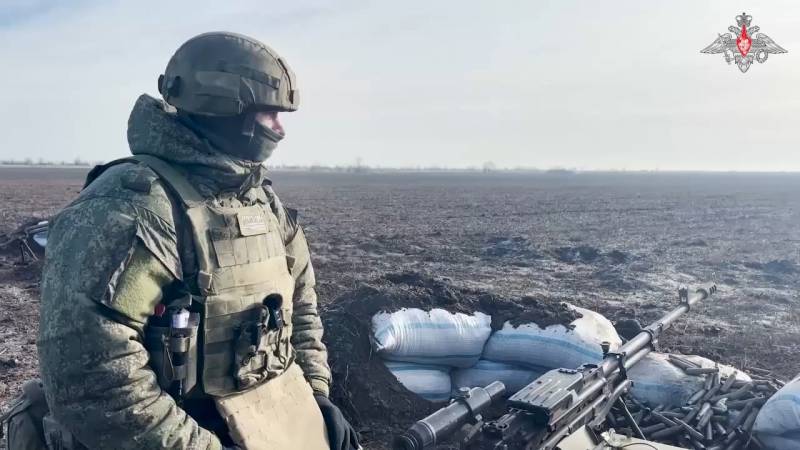 A remote-controlled combat module with a heavy machine gun is mounted on the T-90M turret. Tank commanders and gunners master these weapons and train to hit distant targets. The video from the Ministry of Defense demonstrates firing from all types of weapons on the tank, incl. from "Korda" to DBM.

It should be noted that the Kord machine guns are not used in practice for the first time, incl. in real combat. Previously, such weapons showed their best side and confirmed the calculated characteristics. Now it is once again demonstrating its capabilities. At the same time, some features of current events contribute to obtaining good results.

A promising heavy machine gun "Kord" was developed in the nineties by the Plant. Degtyarev (Kovrov). It was considered as a modern replacement for the existing NSV Utes machine gun, which has technical, technological and economic advantages. The project was ready in the second half of the decade, and then the machine gun was put to the test.

At the turn of the nineties and two thousandths, Kord passed all the checks and was adopted by the Russian army. Also in Kovrov mastered mass production. Over the past two decades, thousands or tens of thousands of products have been manufactured. With their help, it was possible to carry out a complete or almost complete replacement of the old NSV machine guns.

Products "Kord" are intended for different units and branches of the armed forces, and therefore are produced in different trim levels. In all cases, a unified machine gun body is used, while the composition of other components varies. So, for infantry, products with a bipod or machine tool are intended, and on armored vehicles, machine guns are used with turrets or full-fledged combat modules. On ships and boats fleet, in turn, "Kords" are used with pedestal installations. 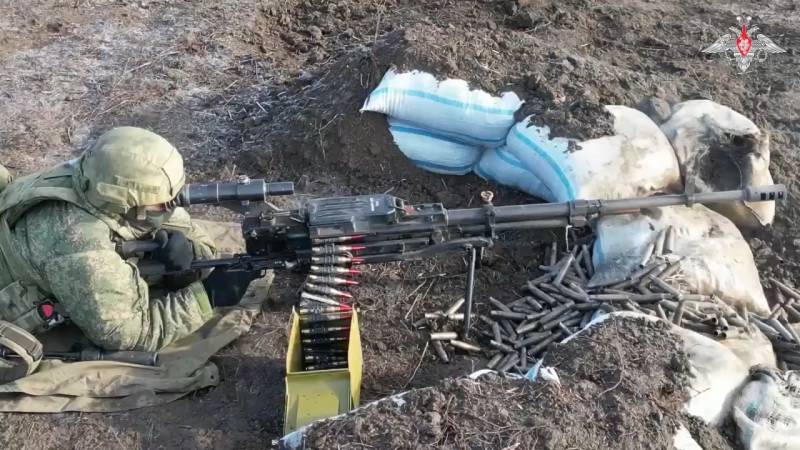 "Kord" is a machine gun chambered for 12,7 x 108 mm, designed to deal with enemy manpower and light armored vehicles at distances up to 1,5-2 km. The design of the machine gun as a whole is made on the basis of traditional solutions, but due to new technologies, it was possible to improve some characteristics.

The machine gun is equipped with a rifled 12,7 mm barrel with a length of 1070 mm (84 klb) with the possibility of quick replacement. Due to the improved design, uniform heating of the barrel is ensured, which allows maintaining the required accuracy and accuracy even during long-term shooting. The infantry version of the product called 6P50 is equipped with a multi-chamber muzzle brake. The 6P49 tank machine gun receives a brake or a conical flame arrester.

Used automation based on the removal of powder gases with a long piston stroke. The gas outlet of the barrel is directed downwards; the tube with the piston is under the barrel. The shutter with a rotary larva is used. Locking occurs due to the rotation of the bolt and its engagement with the breech of the barrel. Due to the heavy loads on the gate, there are 14 lugs (two rows of seven).

The trigger mechanism provides firing from an open bolt. Only burst fire is foreseen. In the 6P50 variant, fire control is carried out by a trigger lever, while the tank machine gun is equipped with an electric trigger.

"Kord" uses tape power. Due to the replacement of the receiving mechanism, the tape can be fed both from the right and from the left. The cartridge case is ejected forward through a special tube. 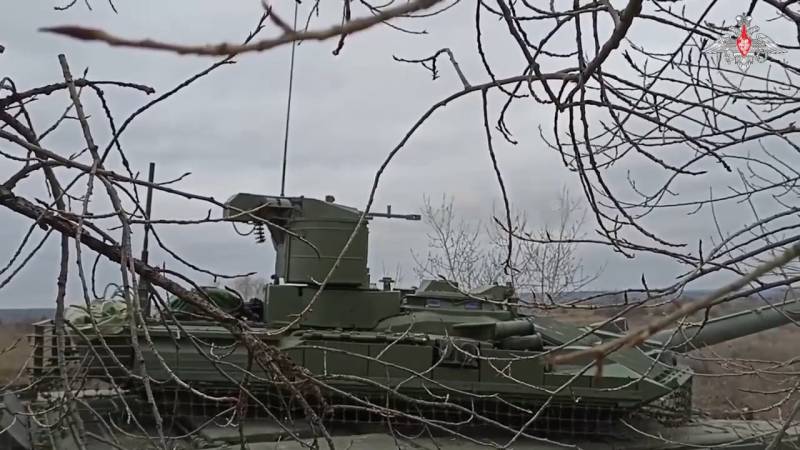 Like other large-caliber machine guns, Kord has high fire performance and is capable of hitting various targets, incl. at great distances. The potential of this kind is actively used by our troops in the zone of the Special Operation.

12,7mm bullets pose a particular danger to unprotected targets. They are guaranteed to destroy manpower, hit unprotected equipment and literally pierce unfortified buildings at all actual ranges of fire. The effectiveness of shooting in this case depends only on the probability of hitting the target.

Depending on the type of ammunition, the machine gun is capable of hitting light armored vehicles. So, cartridges of the B-32 type provide penetration of 20 mm of armor from a distance of 100 m. For a BS cartridge, the range of penetration of such an obstacle is higher - at least 700-750 m. This means that Kord can hit a wide range of light armored vehicles available to the enemy .

Ukrainian formations are currently armed with many types of lightly armored vehicles, mostly foreign-made. A significant part of such machines is protected only from bullets of normal caliber or fragments with equivalent energy. Large-caliber bullets, incl. with an armor-piercing core, they are quite capable of breaking through such protection. 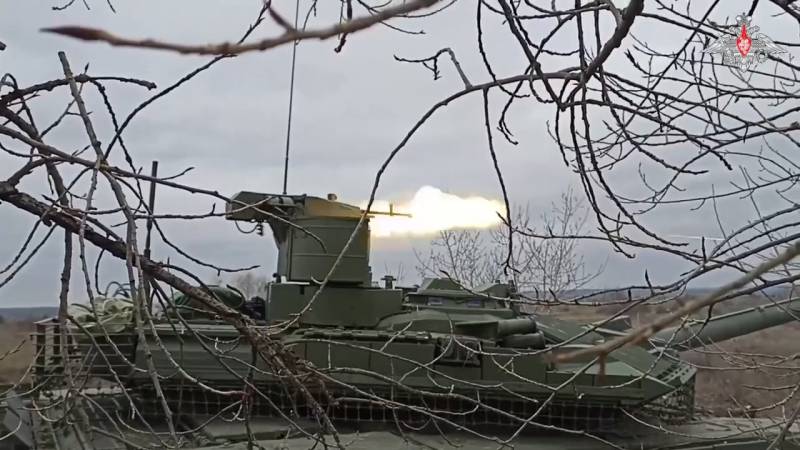 Muzzle brake in action
For example, depending on the firing distance, Kord can hit the old BRDM-2 or newer Ukrainian BTR-4, both in the forehead and on the side. Foreign armored fighting vehicles, such as the American M113 and their derivatives or the British Husky, are also not protected from heavy machine guns. Similar risks exist for other machines or systems that do not have an adequate level of protection.

"Kord" can work on air targets. 12,7 mm bullets, incl. armor-piercing are capable of inflicting serious or even fatal damage to an aircraft, helicopter or large UAV. Small and medium drones can be destroyed with even a single bullet. In such situations, everything depends on the skills of the machine gunner and his ability to hit difficult air targets.

Thus, our ground forces have at their disposal all the necessary range of small arms, including the most powerful models. The niche of a large-caliber machine gun for solving special problems has now been firmly occupied by the Kord product in several versions with different features.

The Kord machine gun is distinguished by high performance and is capable of fighting a wide range of targets, up to armored vehicles of various types. Right now, machine gunners and gunners-operators are using these opportunities and inflicting damage on the enemy, both in manpower and in equipment. "Kords" in such a situation become a serious argument in favor of our army.