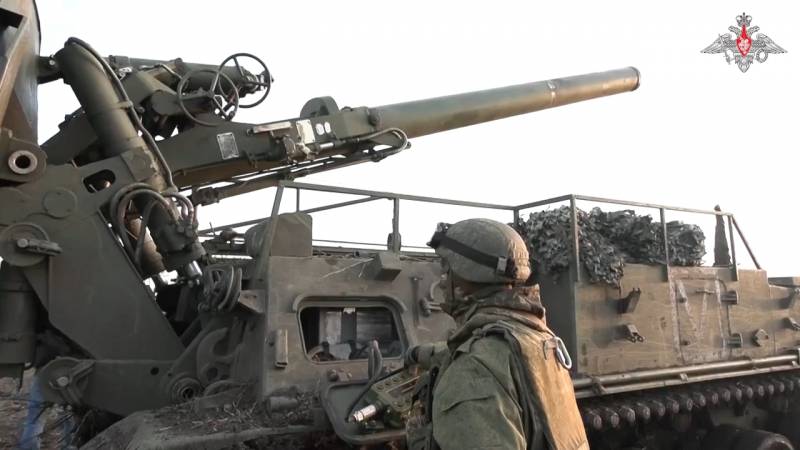 Almost from the very beginning of the Special Operations, Russian artillery units armed with 2S4 Tyulpan self-propelled mortars have been participating in the battles. Due to the special performance characteristics, such systems are capable of hitting the most complex targets and important enemy targets. The Ministry of Defense has repeatedly shown the combat use of such systems, and in recent days new materials have appeared on this topic.

A new video showing the operation of the "Tulip" and its calculation was released on December 15th. Mortarmen and their equipment from one of the units of the Eastern Military District became its heroes. Demonstrates the process of deploying a mortar in position, loading and aiming. Then the calculation fires a shot, reloads the gun and shoots again. After firing, the mortar rolls up and leaves the position. The video also contains footage of hitting targets. After hitting a heavy 240-mm mortar mine, a flash and a large cloud of dust form at the target site.

The Ministry of Defense also published an interview with the personnel of one of the mortar batteries. According to the commander of the unit, mortars work from closed firing positions on the second line of defense. The main task of the calculations is the destruction of enemy infantry in various shelters. Depending on the ammunition used, the 2S4 system can hit fortified structures at ranges up to 19 km. 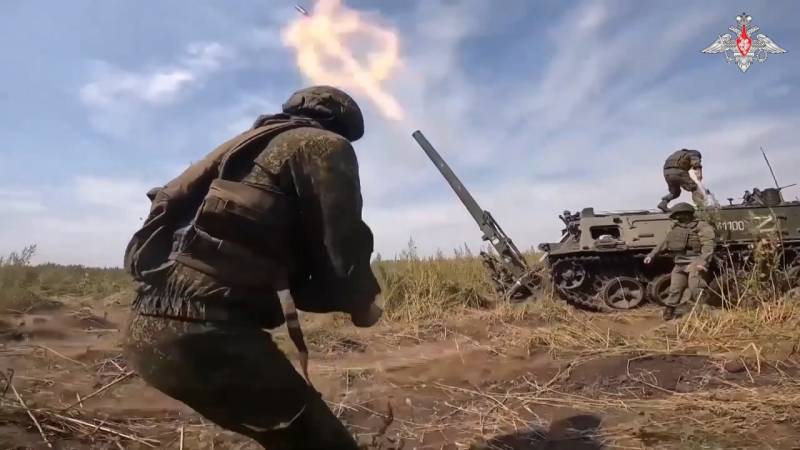 The commander of one of the self-propelled guns noted the features of combat work. So, in preparation for firing, loading takes the most time. This is due to the special way of feeding ammunition into the barrel, as well as the large mass of mines used - some of them weigh more than 250 kg. In addition, after reloading, restoration of aiming is required.

On December 18, another video about the use of Tulips was released, this time from the Central Military District. The exit of two mortars to a firing position with subsequent deployment and preparation for firing is shown. In particular, a close-up shot of the process of feeding active-reactive ammunition into the barrel. After firing a few shots, the mortars descend to a safe place.

The Ministry of Defense reports that the mortars of the Central Military District are solving the tasks of destroying important nodes of the enemy’s military infrastructure. To destroy such objects, mortar mines weighing from 130 to 230 kg are used. They are capable of penetrating concrete floors up to 3 m thick. 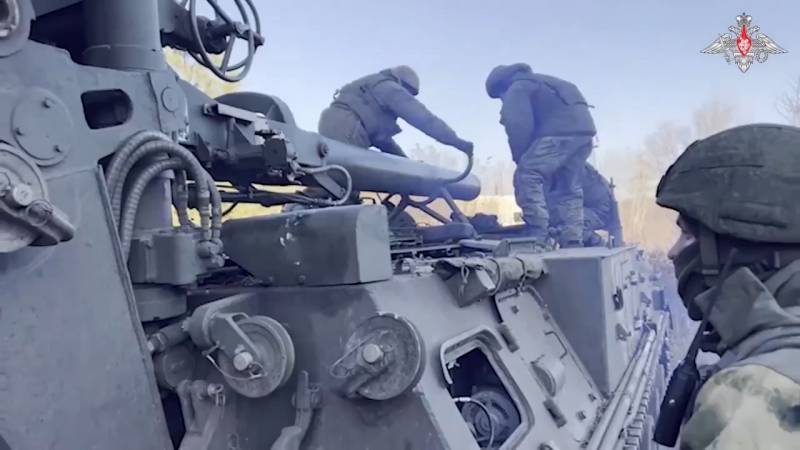 As far as is known, the Tulips and their crews have been participating in the Special Operation almost from the very beginning, from February-March. Self-propelled mortars are regularly used to solve particularly difficult tasks and thus complement other smaller caliber artillery.

Thus, in the spring of this year, 2S4 self-propelled mortars made a significant contribution to the liberation of the city of Mariupol. Then the enemy forces were blocked on the territory of two metallurgical plants and tried to use them as a kind of fortress. The Russian army refused to storm such fortifications and began to destroy them by various means, incl. using self-propelled mortars of special power. Active shelling with 240-mm mines, including adjustable ammunition, led to a natural result. The enemy suffered serious losses, was left without shelter and surrendered.

In the future, "Tulips" repeatedly appeared in other sectors of the front, where increased firepower is required. In particular, it was reported about the participation of such equipment in the destruction of Ukrainian fortified areas in the occupied part of the DPR. They managed to create a network of protected structures and positions there, and special firepower is required to combat it. 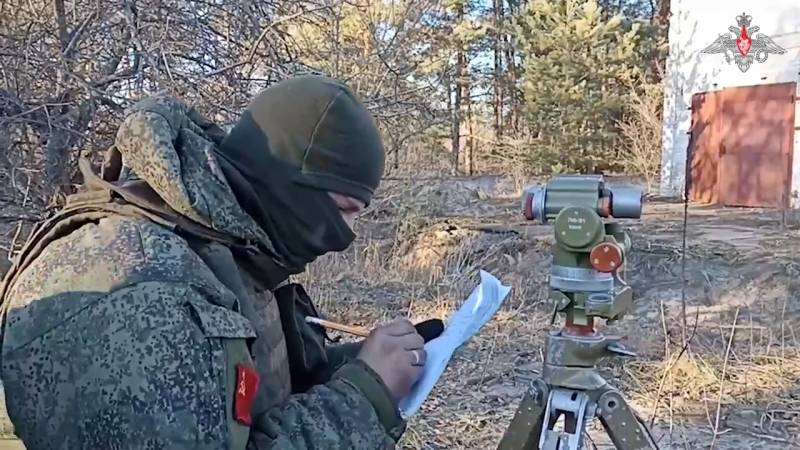 It is obvious that the combat work of the 2S4 "Tulip" systems will continue further, until the completion of the Special Operation. The enemy still has enough protected objects, and self-propelled mortars will not be left without targets for firing. The constant and methodical use of such weapons will give positive results and in a certain way contribute to the general demilitarization of Ukraine.

Product 2S4 is a 240-mm self-propelled mortar on a tracked chassis. A vehicle with a combat weight of less than 28 tons and a crew of 5 people. able to move between positions, quickly turn around and open fire on distant targets. A large-caliber mortar is designed to destroy concentrations of troops, command posts, radio or strike equipment, as well as protected enemy targets.

"Tulip" is built on the basis of an armored tracked chassis. The body is assembled from sheets up to 30 mm thick, which provide protection against bullets and shrapnel. A 520 hp diesel engine is used, with the help of which the car accelerates on the highway up to 60 km / h. On off-road or rough terrain, the speed drops by half, but high cross-country ability is provided. 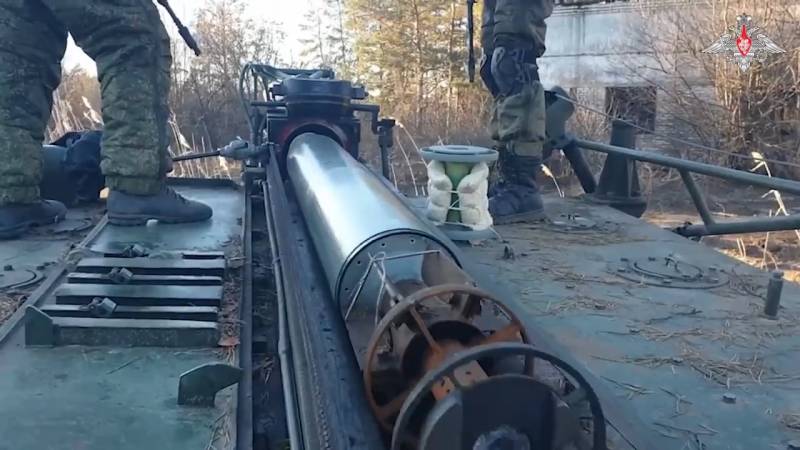 The armored vehicle is equipped with an open installation with a mortar. Before firing, the installation is lowered to the ground and stands on the base plate. There are guidance mechanisms that give elevation angles from + 50 ° to + 80 ° and horizontal guidance within 10-40 degrees. left and right.

A 240-mm mortar 2B8 with a barrel length of 20,8 klb is mounted on the installation. The supply of ammunition is carried out from the treasury; to reload the barrel is transferred to a horizontal position. Ammunition of 10-20 shots is transported inside the hull. Shots are fed into the barrel by a mechanical conveyor; if necessary, the calculation can perform the required operations with mines. It takes approx. 1 minute.

The 2B8 product can use a wide range of ammunition for various purposes. The main ones are high-explosive fragmentation mines 53-VF-864 weighing 130 kg with a range of 800 m to 9,65 km and a 228-kg active-reactive product 3VF2 flying at 19,7 km. There are also cluster and incendiary munitions. In addition, the Tulip is equipped with the Daredevil complex, which includes the 3VF4 guided mine. Several types of mines with a nuclear warhead were developed, incl. neutron type. 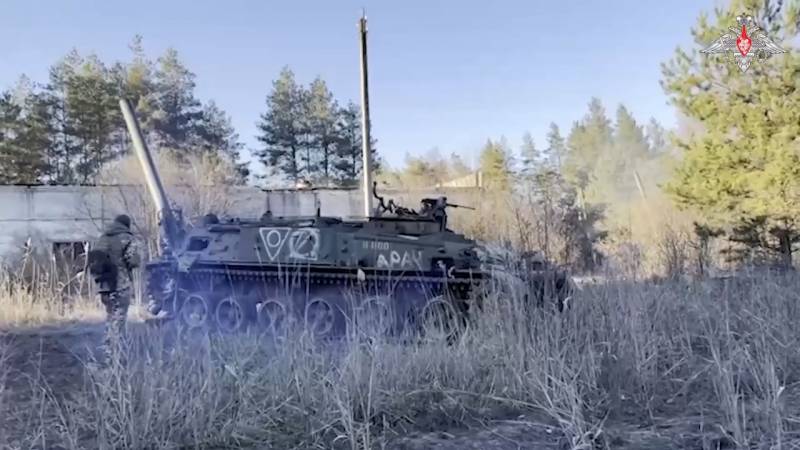 The combat vehicle is equipped with a R-123M radio station and tank intercom device. In addition, battery and division commanders have their own means of communication. It provides reception of information about the target, calculation of data for firing and their issuance to gunners. In recent years, new communication and management tools have been introduced at the departmental level, due to which data transfer is accelerated and simplified.

"Tulips" can interact with various means of artillery reconnaissance. These can be armored mobile reconnaissance units, unmanned aerial vehicles, ground-based counter-battery radars, etc. The greatest efficiency in reconnaissance and fire adjustment is shown by modern UAVs of the Orlan-10 type.

At the moment, the 2S4 Tyulpan self-propelled mortar with the 2B8 gun is the most powerful domestic artillery system. In terms of the combination of tactical and technical characteristics, this machine surpasses all other samples. First of all, such superiority is associated with a large caliber - it allowed to increase the size and weight of the mine, gaining maximum power.

Such advantages have been repeatedly demonstrated in various exercises. In addition, the "Tulips" took part in several armed conflicts, starting with Afghanistan. Right now, this technique is again firing not at training targets, but at real enemy targets - and again showing its strengths, and also helping to achieve the overall goals of the operation.