Death squadrons in Syria are under US auspices. 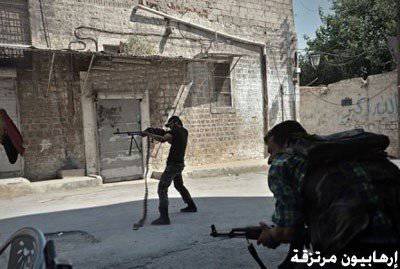 In the center of Damascus thundered a new explosion. An explosive device was laid in the garage of the building of the General Federation of Syrian Trade Unions. 11 people suffered, one of them is in critical condition. This building, which houses the institutions that provide assistance to the workers, as well as buildings located nearby, has suffered extensive material damage.

The terrorists committed their gangster action at a time when the majority of the employees were in the building. This indicates that they wanted as many people as possible to suffer.

The army of Syria is cleaning the suburbs of Damascus from Kharasta and Seyid Zeynab from terrorists. Counterterrorist operations are successful, selfless Syrian soldiers pursue bandits.

In the province of Idleb there was an attempt by terrorists to seize the military airfield "Taftanaz." Many anti-Syrian mass media gladly exaggerated the insurgents "news"That he allegedly already captured. But their joy was short-lived — the UAR army repelled the attack, and dozens of attackers were eliminated.

As long as the Syrian army is strong, even many politicians in the United States claim that they will not intervene in the country. Both Obama and Romney agreed in recent debates that direct military intervention is undesirable. Romney’s position is much more hostile towards Syria, but he also said: “We don’t want our military to take part in this.” We do not want to be dragged into a military conflict. ” And even such an old American “hawk” as Zbigniew Brzezinski, and it is clear that US intervention in Syria or Iran will lead to chaos and a geopolitical explosion in the whole East, and the consequences will be felt by the whole world. The result of such aggression, according to Brzezinski, will be a rise in oil prices, and all the efforts of the EU countries to overcome the crisis will be undermined. As a result, the differences between the EU states will increase.

"Peace-loving" statements of Americans, of course, hard to believe. A century ago, US President Wilson, on the day Germany declared war (also, by the way, under the slogans of “democracy”), loudly declared that he felt extremely friendly feelings towards the German people. And here is an example from a very recent stories - The United States did not intend to invade Libya either, as many loud words were said on this topic. As a result, the American "Tomahawks" have dealt many merciless blows to this once prosperous country ...

In Syria, the Americans and their allies use a different tactic - the war of attrition. This is a very dirty war, in which there are no moral principles for its authors and instigators.

One of the tactics of American strategists and their puppets in the region is to set off different peoples among themselves. In Syria, they are actively trying to pit the fraternal Syrian and Palestinian peoples. Puppet insurgents made a lot of effort to involve the Palestinians in their pseudo-revolution. But the majority of Palestinians remember that it was none other than Syria who gave them the warmest hospitality and always consistently defended their rights to create their own state and return refugees to their homeland. Although among the Palestinians there were, of course, traitors (there is a black sheep in any herd), but for the most part the representatives of the Palestinian people living in Syria not only did not support the mercenary insurgents, but also organized self-defense people's committees in those areas .

And a few days ago, another attack was made on the Palestinian Yarmuk camp in Damascus. There was a serious fight, and self-defense detachments fought back the raiders.

But in their crimes the anti-Syrian forces go even further, and there is no end to this meanness and atrocities ...

According to the site, many massacres, for which they tried to put the blame on the Syrian army, committed these death squads. In particular, the well-known, world-famous massacre in the village of Al-Hula near Homs was also carried out by these detachments.

Death squads ... What is the name associated with? First of all, with Latin America. As soon as a threat arose for the United States that the left movement could increase in the LA countries and the socialists could win, such detachments were organized to liquidate left-wing activists and people who simply disliked the United States. Death squads committed a mass of atrocious abductions, brutal murders, torture and other terrible atrocities, but no one was held responsible for this. Already in the new century, “death squads” were widely used in Iraq.

Now in Syria the same tactic is used. Cold-blooded villains not only commit mass killings in order to blacken the Syrian army, claiming that it did the “dictatorial regime”, but also kill people who actively support the current legal government of Syria.

I have repeatedly written that anti-Syrian militants destroy the color of a nation — its outstanding people, poets, cultural figures, athletes, engineers, officers, specialists, scientists ... This martyrology is growing every day.

In Damascus, 2 was kidnapped in November, and the next day, a young Syrian actor Muhammad Rafaa was killed, who played in theaters, worked on radio, and acted in several Syrian television series. A young man, born 1982, repeatedly stated that he supported his homeland during those difficult days for her, participated in patriotic actions.

Not far from the city of Raqqah, 3 November, member of the Party Committee of the Arab Socialist Revival, Ismail Al-Hamad, was assassinated.

Doesn't it look like what was happening in Latin America? Now the same dirty tactics of using death squads is used by the United States and in Syria.

The United States is carrying out its anti-Syrian plan with someone else’s hands — hands of outspoken villains and cold-blooded murderers, trying to keep their own hands clean. But they already have so much blood that it can not be washed for several centuries!

New atrocities continue ... In the province of Idlib in the city of Harem, 30 civilians were killed by terrorists.