In conditions when the initiative was almost completely transferred to the hands of the enemy, a strike into the depths of Russian territory was quite logical. It was vital for the Ukrainians to inflict reputational damage on Russia, and not at all symbolic - in total, three servicemen were killed on Engels-2 and Dyagilevo, eight were injured.

According to satellite imagery and photographic evidence, Tu-22M and Tu-95 strategic bombers were hit. It is important that the base airfields of the Russian nuclear deterrence forces were 500–700 km from Ukrainian territory.

Evil tongues instantly sounded the bell - now the Moscow "Decision Making Center" was within reach. It is difficult to judge how justified such panic moods are, but I really want to believe that the 1st Air Defense and Missile Defense Army of Special Purpose knows its business and will not allow a heavy drone to fly in its area of ​​​​responsibility. Apparently, this is what stopped the military command of Ukraine from attacking Moscow.

Also obvious is the participation of Western countries in the planning and conduct of this operation. In order for a heavy drone to fly several hundred kilometers unnoticed over enemy territory, it is necessary that several factors successfully develop at once. Russian radar stations must either be turned off at the moment of passage, or destroyed, or distracted by a massive air attack elsewhere. For this, the Armed Forces of Ukraine have everything - the radars can be hit by AGM-88 HARM anti-radar, and to divert the attention of the "Shell" you can launch several HIMARS salvos or a couple of Grad packages. 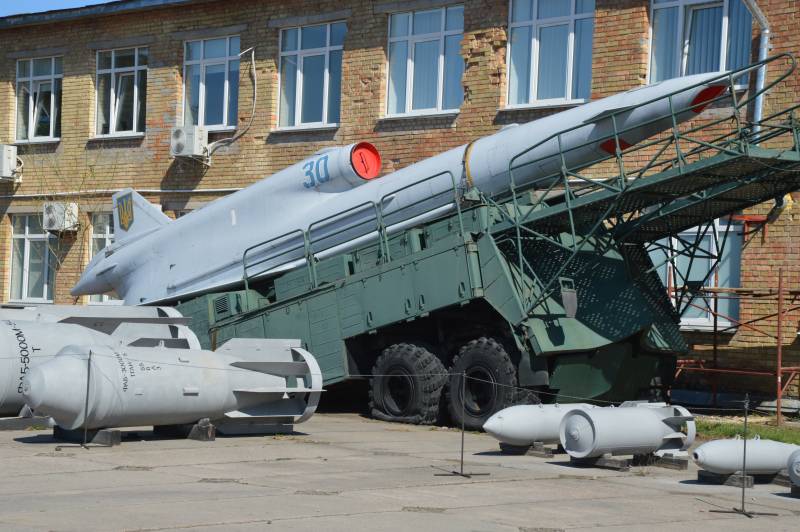 Soviet heritage - Tu-141 in the Kiev Museum aviation Ukraine. Source: wikipedia.org
According to experts, the Ukrainian side could use outdated Tu-141 Strizh to attack airfields. However, how outdated are they if they were able to hit one of the components of the Russian nuclear triad?

Ukrainians know how to handle Swifts also because there is an aircraft factory in Kharkov that produced these drones. And which, apparently, was never destroyed during the ten months of the special operation.

If the attacks on Diaghilev and Engels-2 were indeed carried out by modified Tu-141s, then the Ukrainian aircraft manufacturers were at their best. Which once again confirms the high technological level of the enemy that the Russian army is dealing with.

"Strizh" in general turned out to be a very inconspicuous object. In March of this year, the Armed Forces of Ukraine tried to launch a drone equipped with a bomb towards Russia, but the Tu-141 flew to Croatia. In total, the object spent several tens of minutes over the NATO countries and fell safely in Zagreb. Allegedly, the air defense of all countries, over which the T-141 passed, observed and accompanied the target, but did not dare to destroy it. How true this is, it is difficult to judge, but the failure of the "NATO" air defense, this incident has already entered the history.

The first “pen tests” with the Armed Forces of Ukraine took place back in 2014 during a punitive operation in the Donbass, however, they ended in vain. But by December 2022, most of the technical problems had been resolved, and the Tu-141s, which were essentially cruise missiles, flew to Russian airfields.

Could it have been defended?

Naturally, in a patriotic environment, the strikes of the Armed Forces of Ukraine on the rear airfields caused a storm of indignation. Starting from calls for a retaliatory nuclear strike on Kyiv, they say, drones encroached on Russian strategic weapon, and ending with cries of the need to severely punish the perpetrators. It was supposed to remove the heads from the leadership of the local air defense and the command of strategic aviation. Say, how did it fail to defend against Ukrainian cruise missiles?

Let's try to look at the situation without emotions.

How does the Ukrainian side act? Carefully and with serious assistance from NATO, they are looking for weaknesses in Russian defense. They found a hole in Sevastopol and hit on October 29th. Yes, this was preceded by several months of testing and approbation of kamikaze boats. The attack was made and has not been repeated. Whether the APU has run out of drones, or whether they simply cannot get through a qualitatively new defense, is not known for certain. Explosions similar to those that occurred at the Saki airfield in Crimea are not repeated, no matter what their cause. Russia, as bitter as it sounds, has to learn from its mistakes.

With a strike on the rear airfields of Engels-2 and Dyagilevo, the Armed Forces of Ukraine achieved the main thing - they made army officials think that the NVO is no longer limited to four regions of Russia. It's unfortunate that we had to pay for this with the lives of our guys, but with the existing approach, when we parry rather than attack, this blow was only a matter of time. Now we have to defend. And not only these airfields, but also objects in an even greater depth of defense - even in standard equipment, the Tu-141 can go a thousand kilometers.

In Ukraine, they are working around the clock to modernize the Soviet Swifts and, with the help of allies, can turn it into an even more dangerous projectile. This is very beneficial for the West - formally, the Ukrainians independently create such weapons, so there can be no talk of any escalation from Russia. In the minds of NATO leaders, if strikes on Russian territory are not carried out by foreign weapons, then there is no need to worry.

That was the case with Engels. Source: Telegram 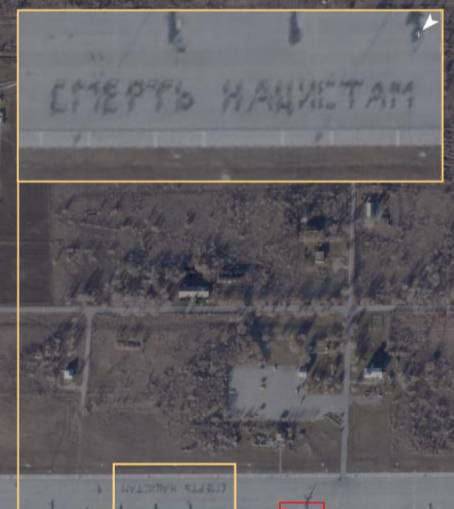 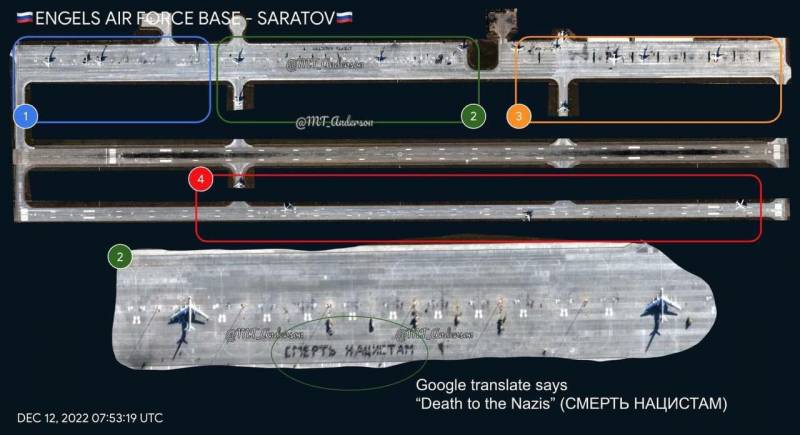 Now so. Source: Telegram
What measures are to be taken by the Russian Aerospace Forces, except for the ominous inscription "Death to the Nazis!" at the Tu-95 parking lot?

First of all, bring intelligence and counterintelligence into proper condition, which, judging by the attacks, did not cope with the tasks. Such incidents are not the launch of HIMARS from the third defense line, this is a real attack on sensitive strategic objects. If the Rybar project, according to its founder Mikhail Zvinchuk, has a large staff of sympathetic informants, then why didn’t the trusted representatives of our special services trace the manipulations with rather big Swifts near the front line? It is also possible that the adjustment and guidance of the drones was carried out from the ground by sabotage groups of the Armed Forces of Ukraine deep in the Russian rear.

There are fewer questions about air defense.

Air defense at least shot down kamikaze drones on approach, which is why the damage to the “strategists” cannot be called fatal. There is a shortage of layered defense of airfields, probably due to the transfer of a considerable part of the equipment to the NWO.

The situation is similar with electronic warfare systems, which are of paramount importance in the fight against objects guided by GPS. It is impossible to increase the defense of the rear airfields at the expense of new equipment at one moment - the Almaz-Antey factories are already overwhelmed with orders. Additional protection of objects such as Engels and Diaghilev is possible only by exposing the air defense zone in the east of the country. Certainly not an easy decision, but it is temporary.

The dispersal of aircraft over the gigantic area of ​​strategic aviation airfields also seems logical. Moreover, in such a way that even a part of the machines could be guaranteed to be hit only with tactical nuclear weapons. The difficulty is that the aircraft, in fact, have nowhere else to transfer - in Russia there are not so many sites designed for the full maintenance of such complex equipment.

Now for the expensive stuff.

Of course, it is very difficult to equip an individual reinforced concrete shelter for each Tu-22M, Tu-95 and Tu-160. For example, the "White Swan" occupies an area of ​​​​more than three thousand square meters, Tu-95 - about two and a half thousand. Caponiers will be built and developed in a couple of years, and they will cost not much cheaper than setting up a new air base somewhere beyond the Urals. A radical solution to the problem seems to be the dispersal of our strategic aviation over several airfields, and not over two or three. A rather large service infrastructure requires money and time.

Now, when part of the aircraft has been deployed to airfields that are not capable of fully working with such equipment, it is difficult to even imagine the logistical problems of the flight and technical staff. But in any case, this problem would have to be solved, if not during the NWO, then a little later.