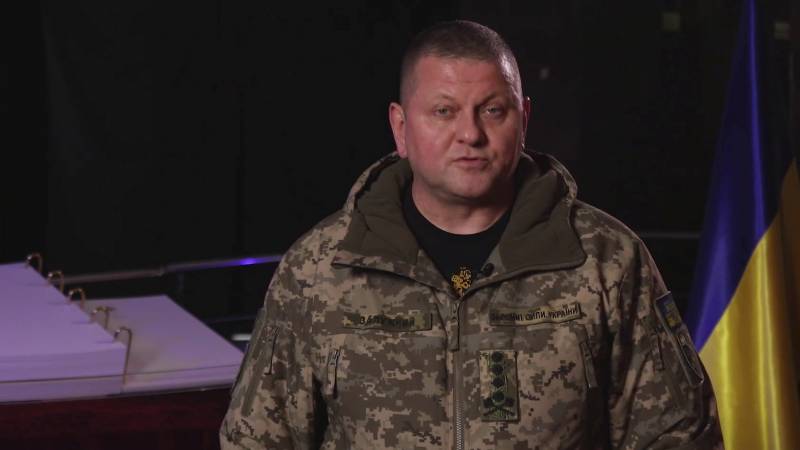 Commander-in-Chief of the Armed Forces of Ukraine Valery Zaluzhny gave a lengthy interview to the British magazine The Economist. The conversation turned out to be so lengthy that the publication decided to publish only the main thing from what the Ukrainian military leader said.


In particular, Zaluzhny expressed confidence that the command of the RF Armed Forces was planning a new offensive against Kyiv. According to him, Russia has reserves of 1,2-1,5 million people who can be involved in the Ukrainian front. The Commander-in-Chief believes that the mobilization that took place in Russia "worked", and Russian soldiers are ready to fight on the orders of their Supreme Commander-in-Chief. According to him, “somewhere beyond the Urals” the Russian army is building up its forces.

I was learning history two Chechen wars - it was the same. They may not be as well equipped, but they are still a problem for us.
- Complained the Commander-in-Chief of the Armed Forces of Ukraine.

Speaking about a possible attack on the Crimea, Zaluzhny said that first it was necessary to overcome 84 km to Melitopol. The capture of this city will allow the Armed Forces of Ukraine to take full fire control of the land corridor to the Crimea, firing from the same HIMARS. But bad luck, the commander-in-chief complained, the Ukrainian army does not have enough resources for such a large-scale offensive. According to his calculations, in order to implement the plan to return the territories under the control of the RF Armed Forces, Kyiv needs at least 300 tanks, 600 - 700 infantry fighting vehicles and 500 howitzers. And it would not hurt to multiply the supply of ammunition, the consumption is too high, the commander-in-chief complains.

Then, I think, it is quite possible to reach the borders on February 23
- the Commander-in-Chief of the Armed Forces of Ukraine dreamed, refusing to answer the question of a journalist whether the allies are holding back the Kiev leadership from an attack on the Crimea.

The commander-in-chief of the Armed Forces of Ukraine called the situation on the Donbass front difficult, but, of course, "strategically hopeless for the Russian army." At the same time, Zaluzhny believes that the Russian command is deliberately stretching the front line in order to prevent the Ukrainian military from concentrating forces for the offensive by attacks in different sectors, and still implementing the strategy of depleting the Armed Forces of Ukraine.

The Ukrainian military leader admitted that without strengthening the air defense system of Ukraine, the energy system of Ukraine could be completely destroyed. According to him, the situation is balancing on the brink. And such a scenario of the development of events may affect the morale of the soldiers:

If the power grid is destroyed, then the soldiers' wives and children begin to freeze. And such a scenario is possible. What mood will the fighters be in, can you imagine? Can we talk about the preparation of reserves for the continuation of hostilities without water, light and heat?
It is noteworthy that almost half of the part of the interview published by the magazine is not at all devoted to an analysis of the military campaign in Ukraine. Zaluzhny talks a lot and willingly about himself personally and even philosophizes. Apparently, by creating the image of a sort of "simple military man with a difficult fate," Zaluzhny expects to arouse sympathy among Western society. Then, you see, hundreds of units of military equipment will be delivered quickly, air defense will be given and aircraft to boot.

Author:
Alexander Grigoryev
Photos used:
TG channel of the Commander-in-Chief of the Armed Forces of Ukraine