Dive-LD and Ghost Shark. Heavy AUVs for the Australian Navy 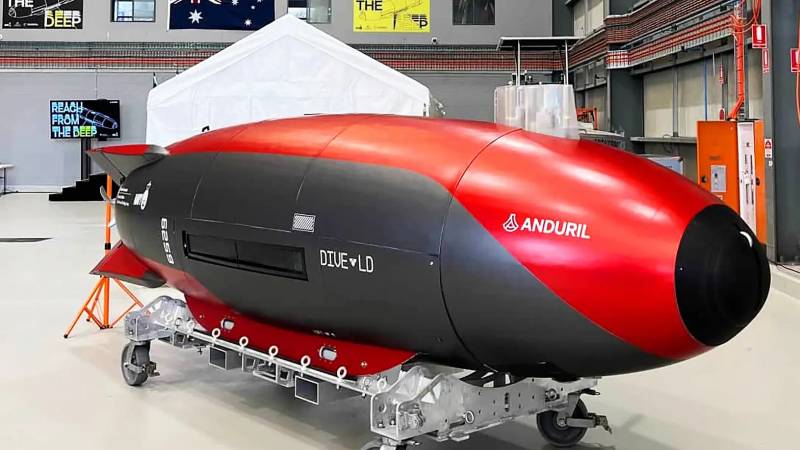 The Australian Navy has become interested in the topic of autonomous unmanned underwater vehicles (AUVs). In the near future, they plan to conduct the necessary research, and then develop and put into service promising underwater systems. For future experiments and research, the Navy ordered an American-designed Dive-LD AUV, and the first of them is already being prepared for operation.

In order to obtain new operational and combat capabilities, the Australian Navy plans to develop and put into service heavy-class AUVs. Such a technique will appear only in the distant future, and various studies and experiments will have to be carried out in the near future. During these events, they are going to determine the real prospects for underwater vehicles, as well as form their optimal appearance.

In the spring of this year, the Dive-LD apparatus from the American company Anduril Industries was chosen as a platform for research. The Navy and the Australian branch of the company signed a contract for the supply of three similar AUVs with a total value of approx. $100 million. The first product was planned to be handed over to the customer before the end of the year. Two others are expected within three years after the conclusion of the agreement.

On December 12, the acceptance ceremony for the first of the ordered underwater vehicles took place at the Anduril Australia site. During this event, representatives of industry and fleet again spoke about the purpose of the new project and its prospects. In addition, some of the plans for the future were disclosed, incl. remote. 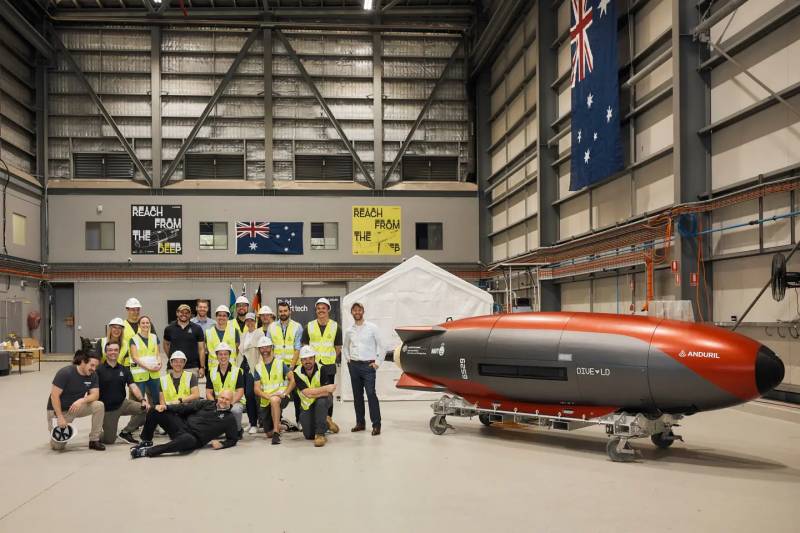 Apparatus and its creators
It is reported that the new underwater vehicle Dive-LD will pass the necessary tests and participate in a number of studies, during which it will show its characteristics and capabilities of various kinds. Then two other AUVs will be tested. It is assumed that each new device will differ in one way or another from the previous one. An iterative approach will allow you to better explore the capabilities of technology and form the best ways to operate it.

In the future, the experience of testing Dive-LD will be used in the development of a completely new underwater complex. The Ghost Shark AUV will be much larger and heavier than the experimental model and will receive a full set of special equipment and equipment. It is planned to establish mass production and master full-fledged operation with the solution of real combat and auxiliary tasks.

The Australian Navy plans to conduct research using the Dive-LD (Dive - Large Displacement) apparatus. This product has been developed since 2018 by the American company Dive Technologies. The finished AUV was presented a few years later, and since 2021, the development company has been offering such equipment to customers. It also provided for the rental of devices for specific projects.

Interest in the Dive-LD apparatus was shown by several organizations and structures, primarily the US Navy. According to known data, the rented AUV was used for bottom research and other scientific activities. In January 2022, Dive Technologies received support from the DARPA agency to conduct new research and further develop the project. 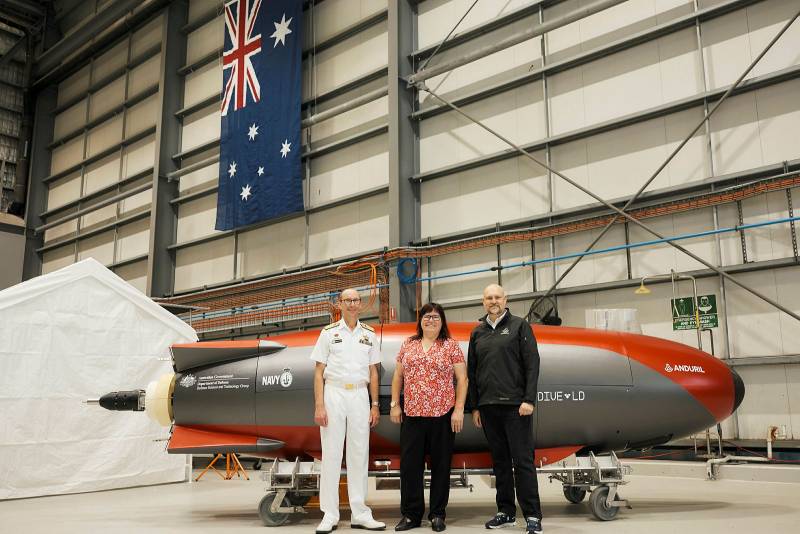 Shortly thereafter, in early February, the defense company Anduril Industries announced the purchase of Dive Technologies. The latter will continue its activities and will develop underwater vehicles. At the same time, it is argued that joining a larger organization will simplify its activities, as well as provide organizational and economic advantages.

After these transformations, a contract was signed with the Australian Navy. It is curious that the purchase of a small “startup” by a larger organization contributed to the emergence of this order. Without Anduril Industries, it would hardly have been possible to organize the assembly of AUVs on Australian territory, as requested by the customer.

The Dive-LD product is a typical modern heavy-duty autonomous uninhabited underwater vehicle and is generally similar to other similar samples. This is a small submarine with a set of basic systems, capable of taking on board special equipment for specific tasks. The total length of the apparatus is approx. 5,8 m with a diameter of 1,2 m. The mass of the structure is 2,72 tons.

The Dive-LD AUV is built in a spindly streamlined hull. In the manufacture of the structure, 6D printing technologies are widely used. Inside the case there are compartments for target equipment, and on the outer surface there are sections for the output of sensors, antennas and other devices. The design of the apparatus provides immersion to a depth of XNUMX km.

The device is fully electric. Batteries of unknown capacity are on board; the movement is provided by an electric motor with a propeller. Also, the target equipment is powered by batteries. The AUV is capable of speeds up to 7 knots. Duration of swimming - up to 10 days. with a range of up to 310 nautical miles. 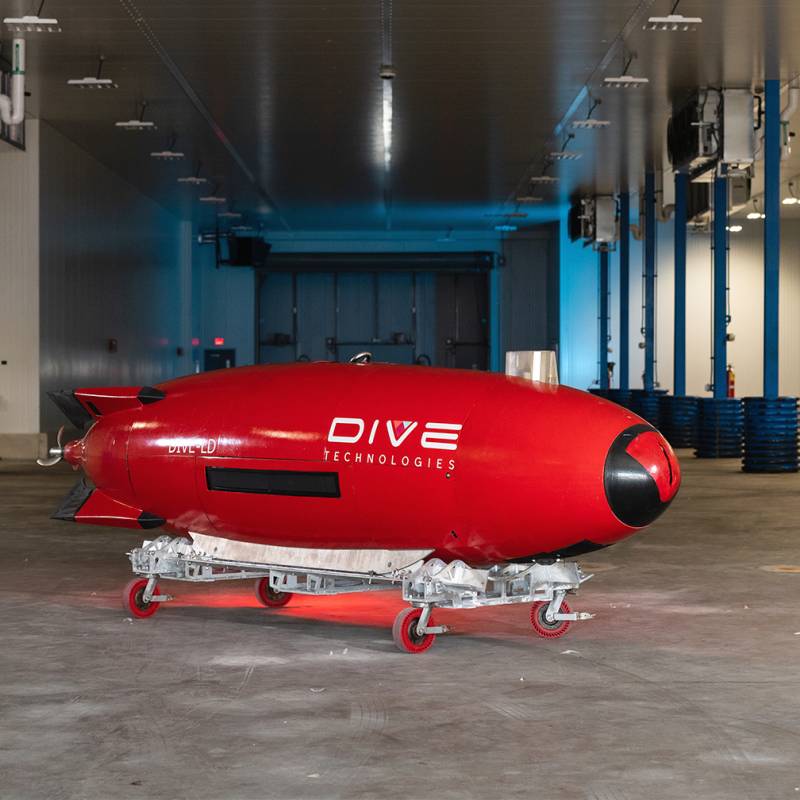 First experienced Dive-LD
During past missions, the existing Dive-LD AUVs were equipped mainly with hydroacoustic stations of various types. They were used to survey the seabed and search for various objects. The device is capable of carrying other loads with other functions. In general, the composition of the equipment depends only on the needs of the customer and the available volume inside the case.

The automatic control system of the Dive-LD apparatus is capable of solving various tasks. It is guided by the readings of various sensors and carries out driving and maneuvering, as well as controls the target equipment. AUV can pass along a given route or patrol a certain area, incl. responding to changing circumstances. Communication sessions are provided for data transmission to the control station.

Over the next few years, the Australian Navy, together with Anduril Industries, plans to conduct full-scale tests of three Dive-LD vehicles in an experimental configuration. Then the development of the Ghost Shark product will begin, intended for mass production and subsequent equipment of the fleet.

The Ghost Shark will reportedly be significantly larger than the existing AUV, with Navy officials comparing it to a school bus. Driving performance and autonomy will increase accordingly. In addition, a large device will be able to take on board more equipment. 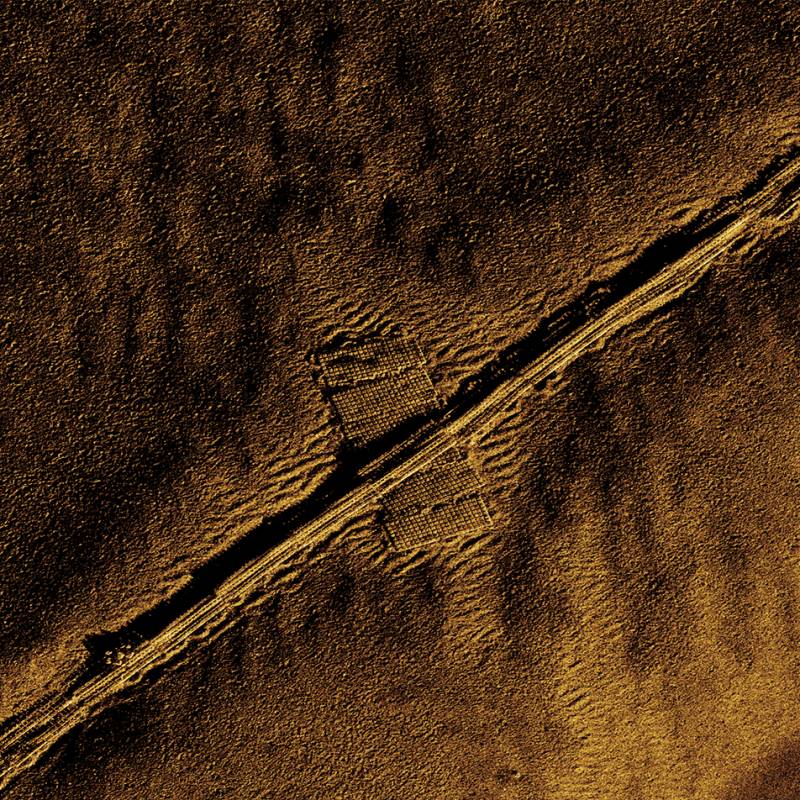 Seabed survey from Dive-LD
Such an underwater complex will be able to solve a wide range of tasks related to patrolling and lighting the underwater situation. He will have to conduct various deep-sea research, carry out reconnaissance and monitor the activities of third countries, etc. Also, the Ghost Shark AUV will be able to strengthen the existing mine and anti-submarine defense systems.

The Ghost Shark is expected to be relatively cheap, especially when compared to full-fledged submarines. The limited cost will allow the Navy to order a sufficient number of such equipment, which will give obvious advantages. The AUV fleet will be able to monitor large areas, incl. performing different tasks at the same time.

However, it is not yet clear how soon the Australian Navy will receive all these capabilities. The three Dive-LDs will be delivered by 2025, and then some time will be spent experimenting. After that, the development of a project for a full-fledged "working" AUV will start, which will also take some time. It is likely that the first Ghost Shark products will be built at the end of this decade. Accordingly, serial production and deployment should only be expected in the early thirties.

Thus, the Australian Navy intends to adopt autonomous unmanned underwater vehicles of various classes, including the largest and heaviest, in the distant future. It is expected that such equipment will give the fleet certain operational and combat advantages.

At the same time, the Australian Navy understands the complexity of such equipment and advanced technologies, and therefore begins work with experiments. Prototypes have been ordered for various studies, and the first of them will begin work in the near future. What will be the test results of the first Dive-LD is not yet clear. But it is clear that the upcoming events are of particular importance for the development of the Navy.