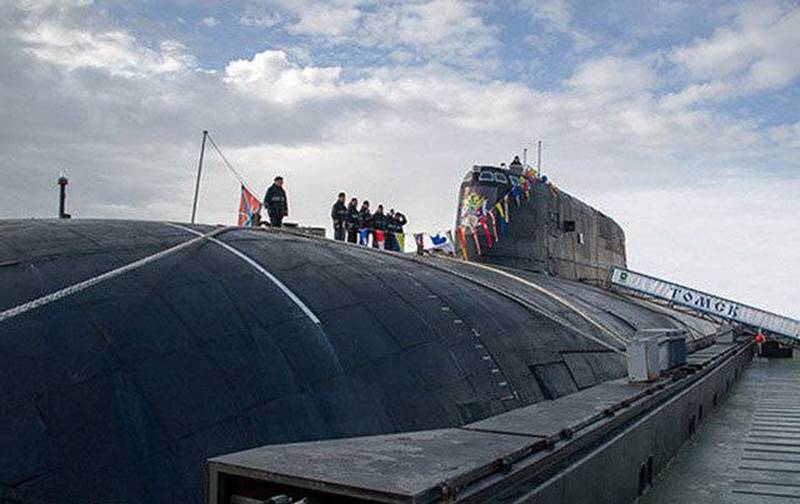 The nuclear submarine missile cruiser K-150 "Tomsk" of project 949A "Antey" was put for repair and modernization at one of the ship repair enterprises of the Far East. This was reported by a source familiar with the situation.


The fact that the Tomsk is undergoing repairs is not surprising, the submarine has been waiting for modernization for a long time. This news interesting in that the submarine was sent to a shipyard, although at the end of March of this year it was reported that Tomsk would restore technical readiness at a permanent base. It can also be concluded from this that in the near future the nuclear submarine missile cruiser "Irkutsk" of project 949A "Antey" will return to the combat strength of the Pacific Fleet, since the "Tomsk" was supposed to be repaired only after the completion of work on "Irkutsk".

Submarine "Tomsk" is currently being repaired and modernized at one of the enterprises of the Far Eastern Center for Ship Repair and Shipbuilding
- leads TASS source words.

Underwater displacement 23860 tons. The length of the longest waterline is 154 meters, the width of the hull is 18,2 meters, the average draft of the waterline is 9,2 meters. Surface speed 15 knots, underwater 32 knots. The working depth of immersion is 520 meters, the maximum immersion depth is 600 meters. Autonomy of navigation is 120 days. Crew 130 people. The main armament is the Granit anti-ship missile, but in the course of modernization it can receive modern cruise missiles Caliber, Onyx, and possibly Zircon.
Military Reviewin Yandex News
Military Reviewin Yandex Zen
20 comments
Ad