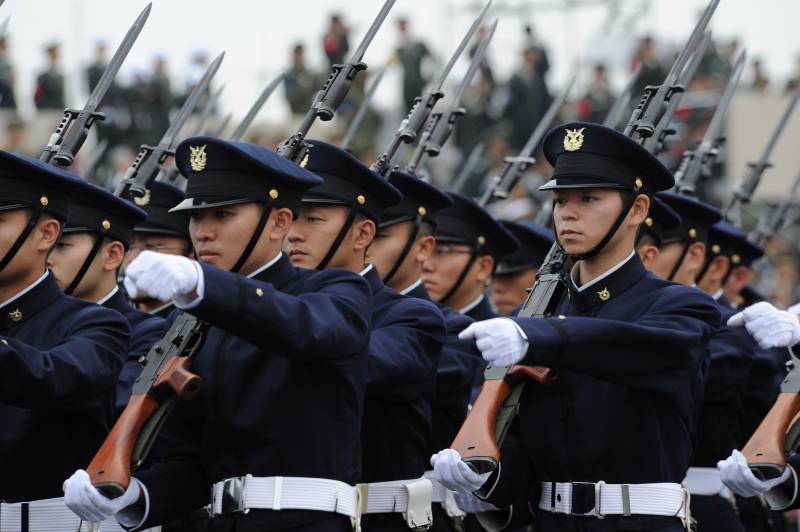 Ceremonial calculation of the Self-Defense Forces

In connection with the deterioration of the military-political situation in the region and the emerging confrontation with neighboring states, the Japanese leadership plans to increase defense spending. It is proposed to gradually increase the defense budget, and by fiscal year 2027 it will increase by 50%, and its size relative to gross domestic product will double. Due to such measures, it is proposed to carry out a general modernization of the Self-Defense Forces, incl. develop a number of promising programs.

The Japanese constitution and legislation in general impose serious restrictions on the construction and development of the Self-Defense Forces. The maximum number of troops has been set, certain types of weapons and certain activities are prohibited. In addition, since the 1s, there has been an unspoken rule that defense spending should not exceed XNUMX% of GDP.

Nevertheless, the general growth of the economy made it possible to gradually increase the nominal size of the military budget, while remaining within the required limits. So, in FY2012. Japan's military budget was 4,645 trillion yen, and for FY2022. allocated 5,37 trillion - 15% more. At the same time, in 2020, for the first time in half a century, the budget exceeded the unspoken limit of 1% of GDP, although by only a few hundredths of a percent.

Depending on the exchange rate in different years, the dollar equivalent of the Japanese budget fluctuated between 42-58 billion dollars. Thus, this year it does not exceed 50 billion. With this level of spending, Japan has consistently ranked among the top ten countries with the largest defense spending. 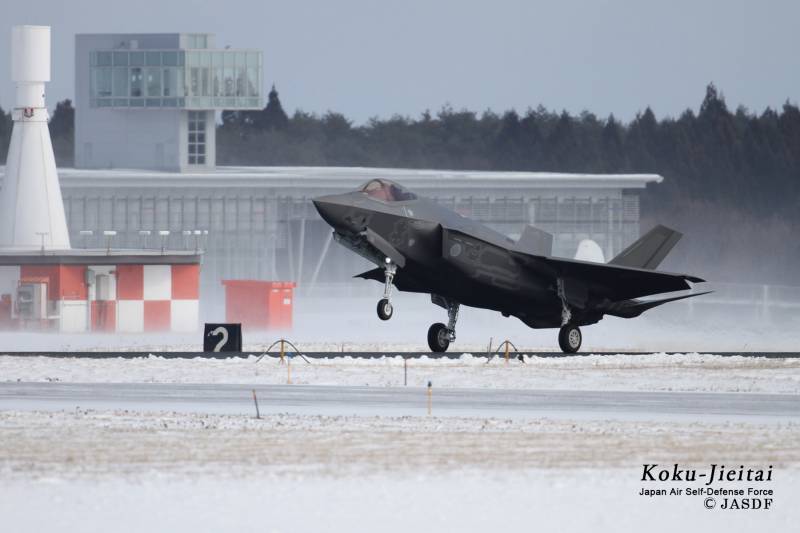 One of the first F-35s transferred to Japan
In general, this level of funding corresponded to the current goals and objectives. It made it possible to maintain the general indicators of the Self-Defense Forces at the required level, to carry out the necessary military construction, to carry out rearmament, etc. However, now the Japanese government plans to develop the Self-Defense Forces more actively, and therefore additional funding is required.

In November 2021, Prime Minister Fumio Kishida said that Japan should seriously increase its defense capability and expand the combat capabilities of the Self-Defense Forces. Later, in January 2022, the Prime Minister spoke about his intentions to revise the defense doctrine, as well as gradually increase the military budget. In April, the ruling Liberal Democratic Party proposed bringing military spending to 2% of GDP.

Over the past months, the Japanese government has been considering this proposal and preparing a future solution. At the end of November, the Prime Minister officially announced his intention to increase the defense budget. According to the new plans, spending on the Self-Defense Forces will increase annually until FY2027. not reach the required level of 2% of GDP. The Ministry of Finance and the military department were instructed to work out specific measures to solve this problem. 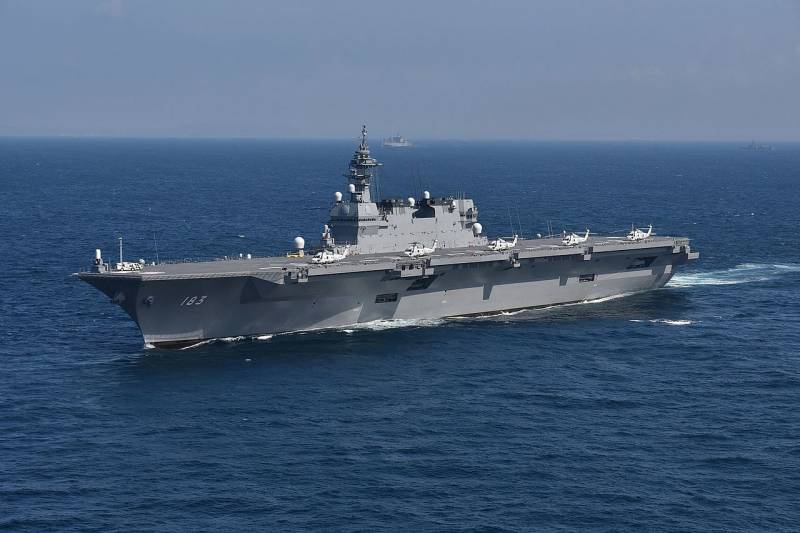 Helicopter destroyer "Izumo"
The first steps in this direction have already been taken. Japan is currently working on a new budget for the next fiscal year starting April 1st. The Ministry of Defense has not yet fully formulated its requirements, but has already requested approx. 5,6 trillion yen (about $40 billion). Obviously, in the future, his requests will increase. As a result, the military budget for FY2023 will increase by a few percent compared to the current one.

It became known how the Japanese government plans to find additional funding for the Self-Defense Forces. General information on this subject on December 12 was disclosed by the Kyodo edition. With reference to its sources in the country's leadership, it writes about the possible use of part of the funds collected earlier for the restoration of regions after the disasters of 2011.

In addition, it is proposed to increase the corporate income tax, currently at 23,2%, as well as the excise tax on tobacco products (61,7%). It is assumed that their increase from FY2024. will allow an additional collection of at least 1,1 trillion yen (approx. 8 billion dollars) annually. About 70% of such fees will come from corporate tax. 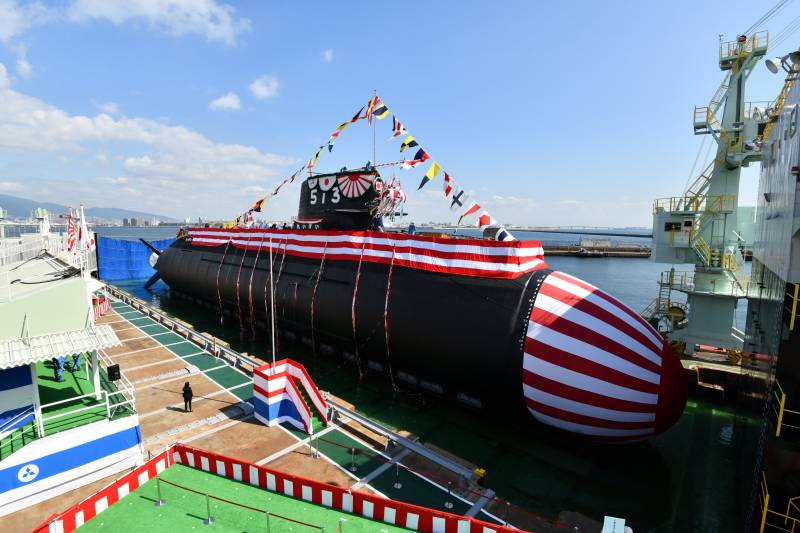 Non-nuclear submarine "Taigei" of the new project
It is not difficult to calculate that the increase in excise and tax, if the additional fees are fully spent on defense, will increase the military budget to 6,6-6,8 trillion yen. This is 20-24 percent. more than the current one. At the same time, more growth is required to reach the 2% of GDP target. According to the latest estimates, to solve such a problem, the defense budget will have to be increased by almost one and a half times. Accordingly, the government should look for new sources of funding. How successful this process will be, only time will tell.

How exactly the Ministry of Defense will use the increased military budget has not yet been reported. However, earlier officials have repeatedly spoken about the need for a general modernization of the Self-Defense Forces and various transformations. The need for rearmament is also regularly mentioned, for which various promising projects are launched. Far from all such plans and proposals can be implemented while remaining within the current military budgets.

Obviously, a significant share of the increased budgets will go to the development and purchase of advanced weapons and equipment. Therefore, one should hardly be surprised that against the backdrop of recent News news about the budget, there were reports of the launch or continuation of various rearmament programs, incl. the most daring.

So, on December 9, Japan, Great Britain and Italy announced the launch of a joint Global Combat Air Program (GCAP), the goal of which is to create a promising next-generation fighter by 2035. Japanese industry in this project will be represented by Mitsubishi Heavy Industries. What will be the financial participation of Japan has not yet been reported, but it is obvious that the work will be paid for precisely by increasing the defense budget. 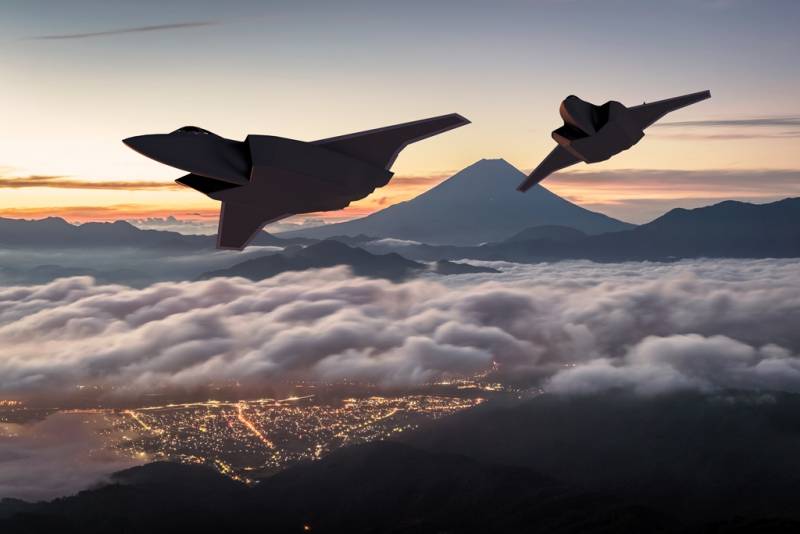 Design appearance of the aircraft GCAP
On the same day, the Japanese Ministry of Defense announced the results of the WAPC program, during which they chose a new wheeled armored personnel carrier for the ground forces. The winner of the competition was the AMVXP project from the Finnish company Patria, and now Japan intends to acquire a license for the production of such equipment. The required vehicles will be produced over the next few years - during a period of gradual increase in the military budget.

A number of other programs and projects are at various stages. First of all, issues of strengthening air and missile defense are being worked out. New ships are being developed and proposals are being made to build full-fledged aircraft carriers. Work has begun in the field of hypersonic weapons, etc. All of these projects require funding, and the planned increase in the military budget is likely to allow them to be implemented.

As an official reason for increasing defense spending, the Japanese leadership calls the worsening situation in the Asia-Pacific region. China and North Korea are building up their military power, and Japan sees them as a threat to its security. In addition, the Japanese leadership follows its main ally and is not going to improve relations with Russia.

In response to the general deterioration of the situation, the Japanese government plans to modernize and strengthen the army, and one of the first steps in this direction is to increase the budget. Now he has to find additional money, increase expenses within the specified time frame and achieve a competent distribution of funds. Whether it will be possible to cope with such tasks, time will tell.