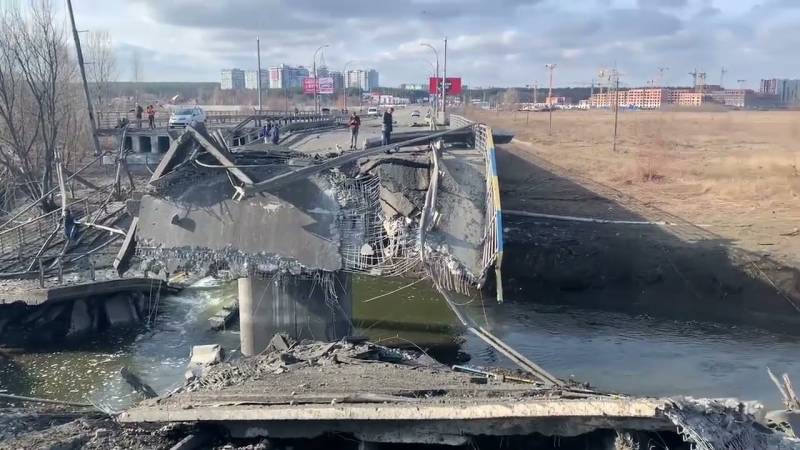 Probably the first question I get asked when talking about the situation in Ukraine is the question of destroying enemy infrastructure. Foaming at the mouth, the most radical interlocutors prove the need to destroy bridges, junction stations, just railway tracks, substations and other facilities of the Ukrainian railway.


It is quite difficult to argue with such interlocutors. Why during World War II partisans, saboteurs, aviation and artillery destroyed bridges, but we don’t today? Why don't we use the full power of our weapons for this? The command does not understand that it is precisely by rail that heavy weapons are delivered to the front?

Interesting and seemingly valid questions. Indeed, represent the resource consumption, for example, tank, if you drive him under your own power at least from the border? Okay, not to drive, but to drive on a trailer, as is done in most armies of the world. This is an excellent target for the Aerospace Forces and artillery. And help the ground forces on the front line ...

I will express my point of view on this issue. For the most part, it was about the destruction of Ukrainian bridges in the areas of hostilities and in the deep rear of the Armed Forces of Ukraine.

The bridge is the most complex engineering structure

Bridges have always been and remain an essential object of defense and the most important goal in any war. This is especially true for strategic objects. Bridges with multiple lanes capable of withstanding heavy equipment and heavy weaponry. Accordingly, both those who defend the bridges and those who are trying to destroy them understand this.

To begin with, let me remind you of the two most famous operations of the Armed Forces of Ukraine to destroy bridges. The first is an attempt to destroy the Antonovsky bridge, and the second is the destruction of the Crimean bridge. Do you remember how many attempts were made to disable the Antonovsky Bridge? And what is the result? When leaving Kherson, we calmly brought our heavy equipment over this bridge.

In the second variant, another question is interesting. How many explosives did the saboteurs need to collapse the bridge? And is it possible again? Our slovenliness is most often disposable. I don’t think that another loaded truck will be able to penetrate this bridge after the appropriate sticking to the special services.

Is it possible today to destroy such objects as the Antonovsky or Crimean bridge with UAVs or missiles? Probably, maybe. But for this it will be necessary to use such a number of missiles and drones that the object will become “gold”. And the result will be in question.

Destroying the bridge bed or railroad tracks, embankment and other facilities is sheer stupidity. Efficiency approaches zero. Even in the First World War, when such explosions were practiced constantly, any armored train had a special repair team and the necessary equipment for the quick repair of tracks. And it takes, the railroad workers will confirm, from an hour to a day, depending on the degree of destruction.

It is necessary to destroy the bridge supports. And if you forget about tactical nuclear weapons, aviation can do this. And the enemy knows it. That's why bridges are protected accordingly. Air defense systems in these areas are built with particular care. Remember the footage from Soviet war films showing the bombing of bridges. Only the most desperate pilots were sent on such missions. To attack along the canvas, practically in the forehead of anti-aircraft gunners, this is almost one hundred percent death ...

I will give one example from stories armies of our other potential enemy. During the Vietnam War, the Americans faced the challenge of destroying a critical strategic bridge at Thanh Hoa in North Vietnam. The result of the confrontation between the bridge and aviation is as follows. The bridge withstood 841 air raids! Vietnamese air defense destroyed 11 enemy aircraft!

Only the advent of laser-guided Paveway bombs in 1972 saved the day. Fourteen raids using this ammunition resulted in critical damage. I think this example is sufficient to understand the power of this goal. And, perhaps, I cannot say for sure, talk about the use of tactical nuclear weapons arose, including from the strategic need to destroy bridges.

I repeat, any major bridge is a strategic facility. Again, I recall the footage from the movies about the beginning of the war. There are many such shots. Some general scolds an officer or even another general for not destroying the strategic bridge during the retreat. Have you ever wondered why this happened so often then?

Were the Soviet generals and officers so stupid that they did not understand the importance of this ill-fated bridge? Alas, but for quite a long time we were inspired by this idea. Stories about repressions in the army, about the fact that the most talented were shot or imprisoned, perfectly illustrated this. But in reality this is not the case at all.

Do you remember what the soldiers were told about in the first months of the war? Soon we will stop the enemy and chase them from our land with a filthy broom! It was faith in the strength of the Red Army. Now about how it is connected with bridges. Any commander was well aware that the very bridge that he was about to blow up would soon be needed for the offensive! His offensive!

There will be no bridge, personnel and equipment will gather at the crossing and turn into an easy target for enemy aircraft. Add to this the evacuation of refugees who are streaming across the bridge. Add the export of material resources. Add supply units to the front line. Here is the answer to the question why the bridge was not blown up.

It is no secret that the destruction of any strategic bridge should have been authorized at the level of the General Staff or Headquarters! And so it was almost the entire war. Moreover, failure to comply with this order almost always ended in a tribunal for the commander who made the decision.

In the conditions of today's Ukraine, the destruction of strategic bridges means the abandonment of the offensive in this particular area and the transition to total defense. True, in the case of Kherson and the Antonovsky bridge, there are options ...

Well, the last part of this. The destruction of strategic bridges in the depths of defense, in the western regions of Ukraine, is also ineffective. Ukraine has had a very extensive rail system since Soviet times.

So, having overcome all the obstacles that I wrote about above, and destroying some bridge, we will get only a short-term result. The trains will be directed to other routes. How much time it will take, I hope, is understandable. The global destruction of bridges will lead to the collapse of the transport system and a humanitarian catastrophe in Ukraine.

Is it possible to block the supply of arms to Ukraine?

The question is interesting and very timely. Indeed, it is necessary to block supply channels. Is it possible to do this quickly and for a more or less significant period of time? Can! But it will be necessary to risk strategic bombers. Only these machines are capable of delivering strikes with weapons that are guaranteed to destroy bridges with the first blow.

The main logistics hub of Ukraine today is Lviv. It is here that military cargo flows not only from Poland, but also from Slovakia. The Polish city of Rzeszow, which has been turned into a gathering place for most Western supplies, is only 146 kilometers from Lviv. Slovaks supply equipment through the Transcarpathian region.

A close look at the map of these areas reveals an interesting detail. All logistics can crumble if only 7 bridges and one tunnel (Beskydy Tunnel) are destroyed. There is also the Uzhok Pass in the Carpathians...

I do not think that such a task is set before our Armed Forces. The situation at the front is under control. The task set by the Commander-in-Chief is being carried out. There is no particular need for radical solutions. The Armed Forces of Ukraine and so "live from hand to mouth." There are not enough weapons, ammunition, personnel.

What our Armed Forces are doing is necessary and sufficient action today. The logistics of Ukraine is extremely difficult. Many hauls are de-energized and use diesel locomotives instead of electric locomotives. The schedule of transportation throughout Ukraine has been disrupted. Of course, some "touches" can be added, such as strikes against diesel locomotive depots and repair enterprises, but...

With the intensification of hostilities, such a decision may well be taken. But this is just a guess. That's why commanders and their headquarters exist to make extraordinary decisions not calculated by the enemy ...