November 3, 2012
6
By the time of its triumphant participation in the air show in Le Bourget, the Su-27 aircraft had already gained international fame: in the period from 1986 to 1988, 27 world aviation records of flight altitude and rate of climb. True, for some time the Soviet side did not disclose the true name of the "record holder" - in the protocols of the FAI he appeared under the code P-42. The fighter was secret, and it was still 2,5 years before the Paris world premiere.

The first publications about the installation of world aviation record-raising rates on the Soviet-made new P-42 jet aircraft appeared at the end of 1986 on the pages of the national press. The short notes stated that the pilot Pugachev V.G. October 27 1986 made a record flight, gaining 25,4 altitudes in thousands of meters in 3 seconds, and November 15 heights in 6 thousands of meters in 37,1 seconds, 9 thousand meters in 47,0 seconds and 12 thousand meters in 58,1 seconds, improving the records of the American Pilot Smith R., speaking at F-15, which lasted more than 10 years for more than 2 seconds. Records were set in two categories - in the class of service aircraft weighing 12-16 thousand kg and in the class of jet aircraft. The first circumstance aroused great surprise among readers who were well versed in aviation matters. They quickly realized that under the designation П-42 the new fighter Su-27 was “hiding”. The fact is that the fighter belonging to the 20-ton class did not fit into the category of aircraft weighing up to 16 thousand. kg (as it became known later, in the FAI protocols, the take-off weight of P-42 was indicated as 14,1 thousand kg, which is 2 tons less than the weight of empty Su-27). But it was all simple. 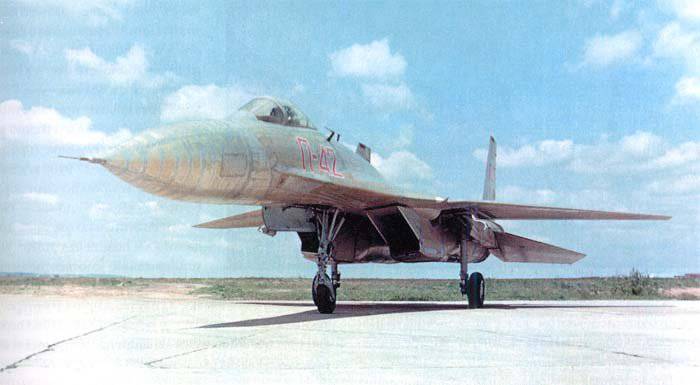 The management of the Ministry of Health of the name Sukhoi decided to prepare for record flights one of the first production Su-27 - the Т10-15 aircraft (serial No. 05-01), which had passed the test program for this time. Later General Designer Simonov MP the unusual name of the aircraft was explained as follows: “It was called the P-42 as a tribute to the great turning point in the Battle of Stalingrad in November 42. Then Soviet aviation, while defending the Volga stronghold, played a significant role in defeating the enemy.” With the P-42, the weapon control system, including an optical-electronic sighting system and a radar station, was removed for its new role. In addition, the aircraft shortened the central tail boom, abolished the podpalochnye crests and parachute brake installation, reduced the area of ​​vertical tail, replaced the radiotransparent radome fairing with a lighter metal fairing, jammed the wing mechanization, and also took other measures to reduce the take-off weight. During the preparation for the test flights, the tanks were filled with a strictly limited amount of fuel, which was enough only for entering the regime and landing. Fighter engines forced, with each thrust increased by 1000 kgf (in the FAI protocols indicated thrust 13,6 thous. Kgf each, and the engines were presented under the symbol P-32). The measures taken made it possible to achieve a unique thrust-carrying capacity of the aircraft at the start equal to almost 2 units. Because of this, the P-42 could accelerate and even cross the sound barrier during vertical climb.

However, a large thrust-weight ratio gave rise to a very peculiar problem: the braking system did not keep the P-42 at the start when taking the fast and the furious. Therefore, an unconventional solution was implemented: the aircraft using a cable and an electronic lock was hooked to a powerful tracked tractor, which was protected from the effects of hot gases from the engines with a massive armored plate. The tractor went to the runway and its weight restrained the roaring plane from the premature movement. The lock at the right time unhooked the cable, freeing the way for the plane, the stopwatches and movie cameras were turned on, and the P-42 made a rush to storm the world records. 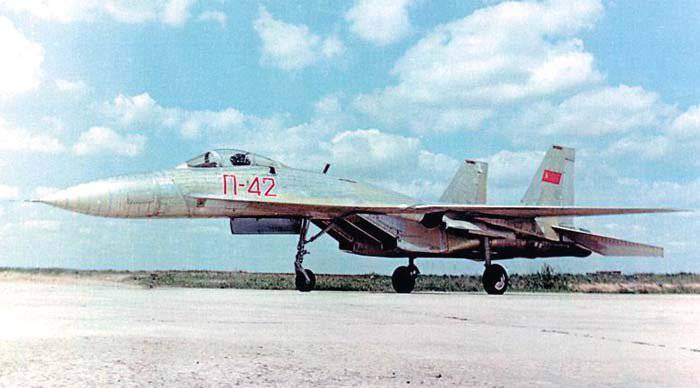 The work on the preparation of the P-42 for setting records was led by the lead engineer (later the chief designer) Martirosov Rolland Gurgenovich.

Another example of the Su-27, which at the end of 1980-s was preparing to set records, was Т10-20 (one of the first production machines, the onboard No.20 and the serial No.05-05), by this time passed the test program and served as a constructive -technological layout T-10KTM - the ship version of the Su-27K fighter.

The machine, modified for record flights, was unusual: the plane abolished the podbalochnye crests and vertical tail tips, and on the wing console were installed tips of ogival shape (used on the first T-10 aircraft). As in the previous time, measures were taken to facilitate the aircraft and to place the maximum possible amount of fuel inside the fuselage. For example, the radar, optic-electronic sighting system, as well as other units of chemical weapons, missile suspension assemblies, gun mount were removed, recharge flaps were eliminated on the bottom surface of the air inlets and so on. The nasal radiotransparent radome radome was replaced with a simple metal cone. An enlarged fuel tank was placed in the elongated central tail boom. A place for additional fuel was also found at the head of the fuselage.

As a result, with the take-off weight of 26,6 t on the T10-20, the fuel supply reached 12,9 t (versus conventional 9,4 t for Su-27). The plane, thanks to all the modifications carried out, had to have an increased flight range and was preparing to set the corresponding world records. But later, for several reasons, interest in record flights disappeared, and Т10-20 was transferred to the aviation museum at the Central Aerodrome of Moscow. 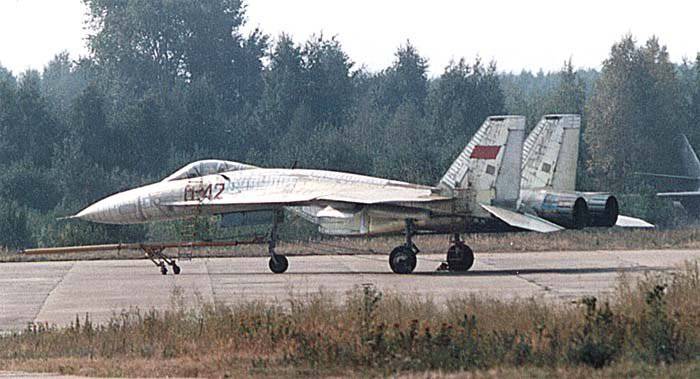