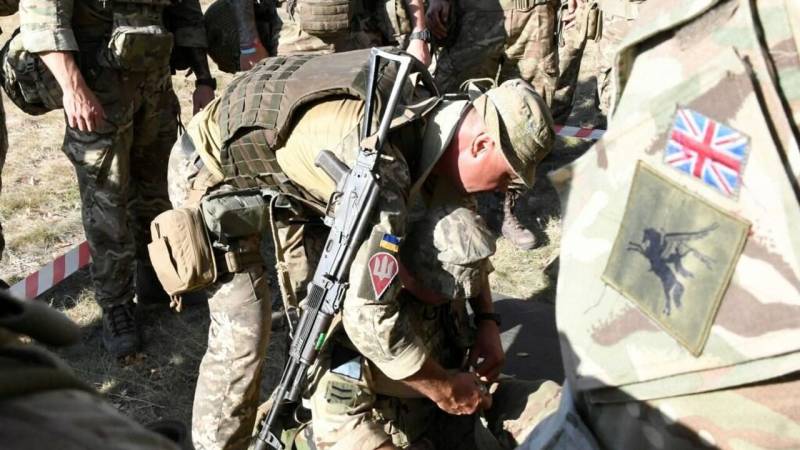 Very often, in conversations about the situation in Ukraine, I hear, at first glance, a completely reasonable opinion that trained soldiers and officers of the Armed Forces of Ukraine are about to arrive at the front, and the situation may change. I myself have repeatedly voiced this idea, which is actively spread in the West and in Ukraine. This is a lifeline in the sea of ​​hopelessness that reigns on the front line.


I listen to these conversations and remember the eyes of my grandfather at the age of well over 80, to whom I gave a simple push-button smartphone. This one is designed specifically for the elderly. And his careful summary of what I'm talking about buttons, more precisely - what to press to answer the call, and how to make a call yourself. And complete indifference to other functions.

Or the eyes of a niece, not a hacker at all, who explains to me what and how I did wrong in my laptop. It's rare to see so much regret. Or surprise at the fact that her uncle cannot understand elementary things. And I really don't understand. More precisely: I understand the motility of the process. I can repeat it. But it is worth changing the task a little, and I will again become a dunno.

The training of specialists for the Armed Forces in a month and a half looks about the same. This is not training, this is coaching. The same take-off and landing program for pilots of the Second World War. And the results will be about the same. Most will really take off, but will not sit down, but will fall. Only a few aces will remain. Units that, against the general background, will not solve anything. As it was with the German aces in 1945.

Today Western countries are announcing an increase in the number of Ukrainian soldiers and officers who will be trained in Western countries according to NATO programs. At the same time, they talk a lot about the quality of this training, about the capabilities of ready-made specialists, but nowhere do they reveal the true reasons for the increase in the number of Ukrainian contingents.

The West does not care at all about Ukraine and Ukrainians. The EU is trying to solve its own problems at the expense of the death of the Ukrainian state and the Ukrainian people.

A soldier costs money, so why not make money?

If you look at the Armed Forces of Ukraine today, it becomes clear that there are really a lot of problems there. If the infantry with grief (for Ukrainian mothers, wives and children) can still be replaced in half by ter-defencists, at least for a while, then there really is a problem with specialists there. Finished Ukrainian specialists. Today at tanks, combat vehicles, on artillery positions, Polish, English, German and other speech is more often heard, and not MOV.

It is no secret that regular officers and sergeants of Western armies often operate under the guise of a PMC today. And no one hides it. “Vacationers and retirees” is a long-established practice. The allies of the belligerents are forced to do this simply because modern technology does not make it possible to train a good specialist in a short time.

Before the advent of PMCs, such specialists were called advisers, instructors, or operations specialists. But the essence has not changed. These are real fighters and commanders who worked together, and more often independently, on the supplied equipment and weapons. The natives, on the other hand, were sightseers and served as "press crews."

So what is the reason for such generosity of some Western countries? Why, for example, will Lithuania increase the number of military personnel of the Armed Forces of Ukraine who will be trained in courses three times next year, from 500 to 1500 people? What will Lithuanian officers teach soldiers and sergeants of the Armed Forces of Ukraine? Lithuania never fought! The Lithuanian military position themselves as specialists in the fight against UAVs. I would understand if such specialists were prepared, for example, by the Israelis, but the Lithuanians ...

And the generosity of the West is easy to explain. Training and maintenance of a Ukrainian soldier or officer costs money. Decent ones, especially for such an economic monster as Lithuania is. Why not make money... Ukrainians are of little interest to anyone. The main thing is the funds allocated by the EU and NATO for their maintenance. At least, this is clearly seen in the results of the battles.

To conduct more or less serious operations, the command of the Armed Forces of Ukraine attracts mercenaries. Ukrainians are used to simulate combat activity. What do, for example, the numerous landings around the ZNPP look like? PR actions, not military operations.

If there are a bunch of motorboats, low-speed barges and boats, then these are the heroic Ukrainian MTRs or marines. And they drown them in batches. DRGs, who are then caught and destroyed already on land, are mercenaries. Or GUR officers who still have pre-war training.

Probably, the biggest secret of the Ukrainian armed forces will have to be revealed. Everyone knows this secret. The Ukrainian army is experiencing colossal problems with specialists in many professions. For example, the qualification of the MTR today not only leaves much to be desired, it has fallen catastrophically. If not for the direct assistance of British specialists, the Ukrainian MTR could be forgotten.

The same problem with gunners, tankers, junior commanders. Even the officer corps, judging by the testimonies of the captured VSE officers, to put it mildly, leaves much to be desired. Officers are fleeing from their positions, leaving the soldiers to their fate.

Another fixed idea of ​​a modern Ukrainian is “Russia will fall apart… soon”. And do not notice that not Russia, but the West today is slowly "creeping" into another "great depression". It should not be overlooked that the EU is losing much of what previously seemed unshakable. European money is "running" to the USA. Moreover, this process is only accelerating.

Under these conditions, European countries are looking for new options for the flow of funds into their own economy. Today Americans are investing in the death of Ukrainians. In the war in Ukraine. True, in my opinion, investments are already being made in the death of regiments. Therefore, it is these investments that need to be “mastered”. You need to stick to the American money that goes to Kyiv.

Two conclusions follow from this. The first is that the war in Ukraine should continue “until the last Ukrainian”, then “until the last Pole and Balts”, and possibly even “until the last German and Frenchman”. And secondly, it is necessary to include war in the country's economy as a separate industry.

Carefully read the words of the Minister of Defense of Lithuania Arvydas Anusauskas in the context of the above:

“We will also contribute to the military build-up of Ukraine subsequently: our assistance is designed to help Ukraine win and guarantee its territorial integrity in the long term. We support the Armed Forces of Ukraine and help to increase their combat capability not only to respond to current challenges, but also to ensure deterrence in the future.”
One might get the impression that those countries that provide their training grounds for the training of soldiers and officers of the Armed Forces of Ukraine are the most ingenious of European states. Alas, this is far from the case. Europe really counts on a long war, on long-term American investments.

On October 17, the EU approved the program for the creation of the EU training mission EUMAM Ukraine. Even then, the European Union understood the fact that the war must be continued in order to maintain its influence on third countries. The victory of Russia will lead to the rapid destruction of the entire pyramid of vassal relations with these states. They will simply leave the West.

As part of EUMAM Ukraine, the military of the Armed Forces of Ukraine will be trained on the territory of the EU member states. The program is designed (attention) for at least two years! In order for it to work, the EU allocates 106,7 million euros. So, the desire of Europe becomes clear - at least two more years of war ... And a small addition to the decision made fully reveals the expectations of Brussels. The EUMAM Ukraine program is “open” to third countries!..

Thus, the expression “to whom is the war, and to whom is the mother dear”, littered with frequent use, remains relevant today. War as another way to make money. No more. And Ukrainians and Ukraine are just consumables, raw materials for making money.

Naturally, the European and American scenarios do not suit us. Today we can already say that "the cards are opened." We know what Kyiv wants. We know what the EU wants. We know what London is aiming for. We understand what Washington's goal is. Even the fact that the global West has no illusions about the victory of Ukraine, we know.

Today the task of the West is to freeze or end the war so that "Putin does not win." I understand that this will sound rather strange, but we need to make sure that a stalemate occurs in this conflict, like in chess. Draw. And the wolves are full, and the sheep are safe. Only then will it be possible to continue putting pressure on Moscow.

Returning to where I started this material, I will make two simple conclusions.

First: what the leaders of the EU and Western countries declare about some kind of turning point at the front after passing the courses by the soldiers of the Armed Forces of Ukraine in NATO countries is a complete sham. No fracture will occur.

Russia has a huge reserve, which is now being trained at the training grounds. President Putin recently named the number of mobilized reserve - 150 people. And they train this reserve not for a month, but for much more.

И second: Based on the understanding of the task of the West, we will plan the further development of the NWO. It is absolutely not profitable for us to drag out the conflict. This means that hostilities will be intensified. I already wrote about it. Cold winter will be very hot...