Last on the Moon: 50 years of the Apollo 17 mission 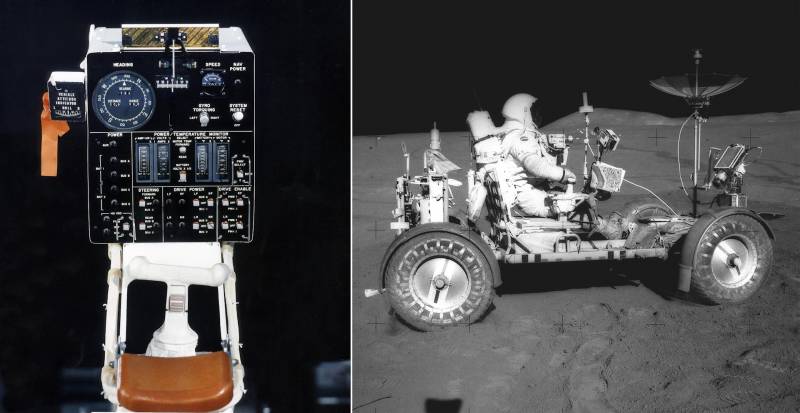 Was there a hoax?

В stories it so happened that with the Apollo lunar program, the Americans overtook the Soviet Union in the space race. Let it be given to the United States at a very high cost, but the Americans set foot on the surface of the moon, but Soviet citizens did not. It was a wonderful time - most of the scientific and technological projects were launched not for the sake of a business scheme, but solely to wipe the nose of an overseas opponent. And it did work out. The first artificial satellite, a man in space, the first ever planetary rover Lunokhod-1 and others. Americans in space, contrary to custom, harnessed for a long time, but quickly drove off. Suffice it to say that in terms of costs, the lunar program outdid the famous Manhattan Project. Five Apollo missions at once, numbered 11, 12, 14, 16 and 17, quite successfully delivered astronauts to the moon. The Nazi Wernher von Braun, who went to the Americans as a trophy, was appointed the head of the program.

For the Soviet Union, the lunar successes of the United States were painful, but no one was going to tear their hair on their heads - they quickly curtailed their own program for the development of the earth's satellite, concentrating on other objects. Fortunately, space turned out to be limitless for the implementation of the most daring fantasies. 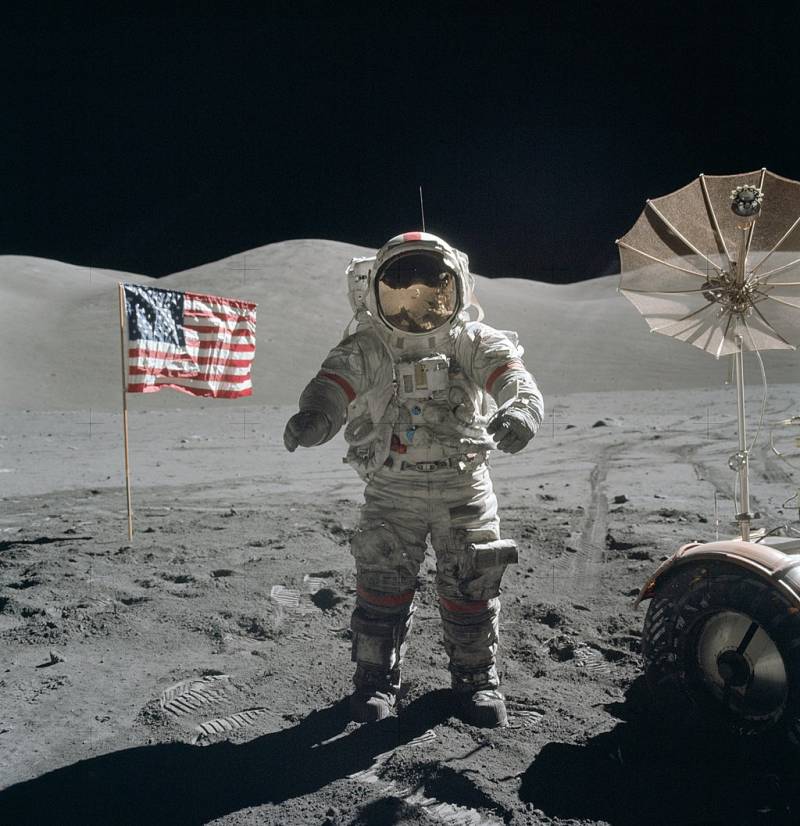 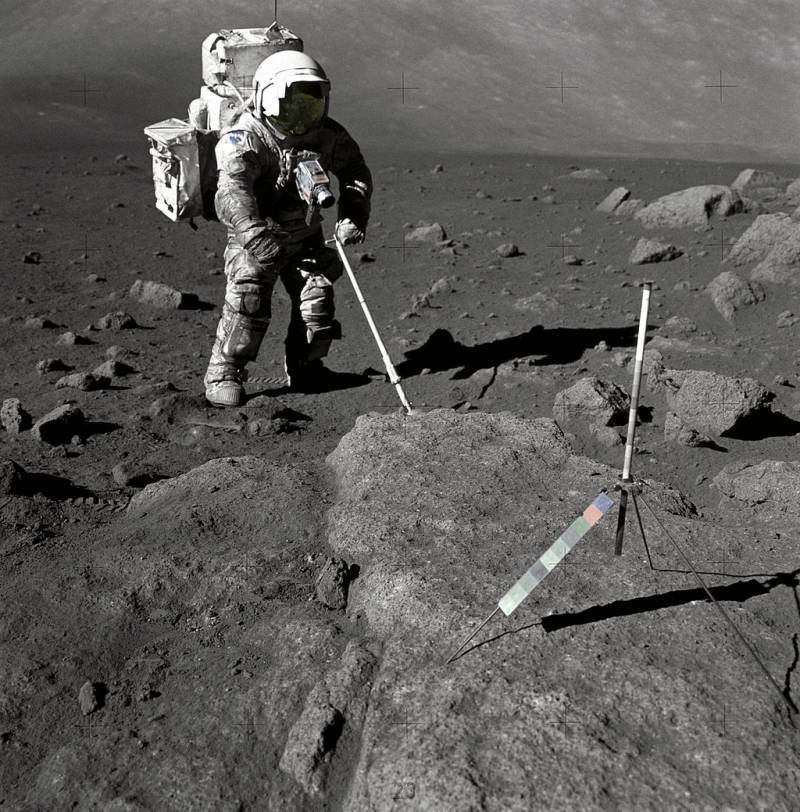 Eugene Cernan (above) and Harrison Schmitt on the Moon in December 1972
But later there were alternative opinions. We are talking about conspiracy theories that expose the falsification of the entire lunar program by the Americans. On the side of the seekers of truth, all the power of Hollywood, which could easily shoot and edit any video with lunar landscapes. Astronauts in such "cartoons" could sit on the Sun if they really tried. It is not the task of this material to debunk such misconceptions, but it is still worth briefly dwelling on this point. Otherwise, the whole story around the 50th anniversary of the last visit of the Americans to the moon does not make sense. 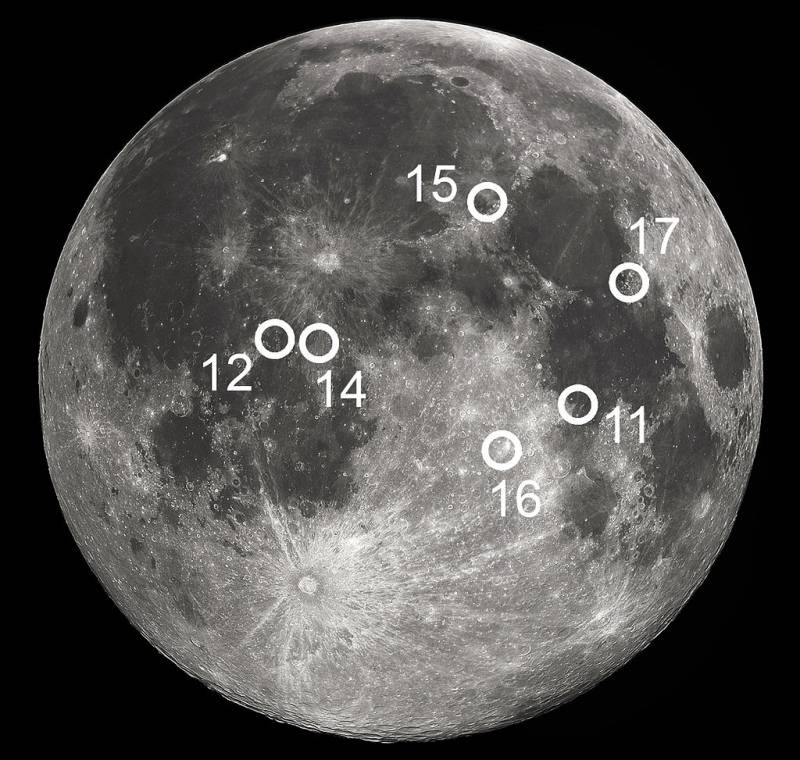 US Apollo landing sites on the moon
The biggest weakness in the theory of any denier of astronauts flying to the Moon is the availability of lunar soil samples. The Americans brought with them a little less than four hundred kilograms of material from the moon, which they actively shared. For example, with the Soviet Union, which was given 324 grams of soil from the Sea of ​​​​Plenty, the mainland area near the Ameghino crater and the Sea of ​​​​Crisis. The exchange of alien material between the US and the USSR was fixed by an agreement back in the 70s - according to the protocol, it was necessary to give at least 3 grams from each mission. When domestic geologists compared the soil brought by the Apollo 11 mission and their own reserves from Luna-16, -20 and -24, it turned out that they were almost identical. It was impossible to reconstruct the lunar soil under terrestrial conditions, at least at the beginning of the 70s. The surface of the Earth's natural satellite is lined with a unique substance formed in vacuum, under scorching solar and cosmic rays, as well as under constant bombardment by meteorites. Strictly speaking, lunar soil is crushed rocks, pieces of glass are products of melting from impacts, and agglutinates formed from fragments and glass.

The second confirmation of the presence of Americans on the Moon was modern photographs from the Earth, in which lunar vehicles, landers, and wheel tracks are clearly visible. Even the path trodden by Neil Armstrong can be seen. By the way, our robotic planetary rovers of the Lunokhod series, which appeared much earlier than the Americans, are parked on the satellite.

When the conspiracy has been dealt a blow, it is possible to figure out what the Americans were doing during their last lunar mission, Apollo 17.

Fifty years ago, American flights to the moon not only became commonplace, but were perceived quite calmly. An old Japanese proverb comes to mind:

"He who has never conquered Fuji is a fool, but he who has climbed to its top twice is a fool twice."
Be that as it may, until December 11, 1972, astronauts landed on the moon five times, spending a total of more than nine days on it. The last Apollo 17 mission was also to be the longest. And so it happened - Eugene Cernan and Harrison Schmitt lived on the Moon for 75 hours, of which 22 hours directly on the soil of the earth's satellite. It was to Schmitt, a professional geologist, that the scientific world is indebted for the delivery of pure olivine, the most ancient mineral from the Moon. The analysis showed that the sample is at least 4,5 billion years old. Americans wouldn't be Americans if they didn't take cars to the moon with them. More precisely, battery-powered electric vehicles, which were not intended to be recharged. Each Lunar Roving Vehicle (LRV) was the lightest possible design, capable of being folded into a compact suitcase on the descent module. The “lunar punishments” were not subject to return and remained on the Moon as silent witnesses of the presence of the Americans. In December 1972, the astronauts had a nice ride at the foot of the Southern Mountain Range. Immediately seven and a half hours lasted the longest exit of the Americans on the rover. During this time, they traveled about 20 kilometers and collected more than 34 kg of samples of lunar minerals. A pair of seismic probes, a cosmic ray detector, as well as specialized equipment for a comprehensive study of the lunar soil were installed on the machine. It is possible to state with a high degree of certainty about the scientific mission of the Apollo 17 flight to the Moon - before that, all the expeditions carried more political overtones. 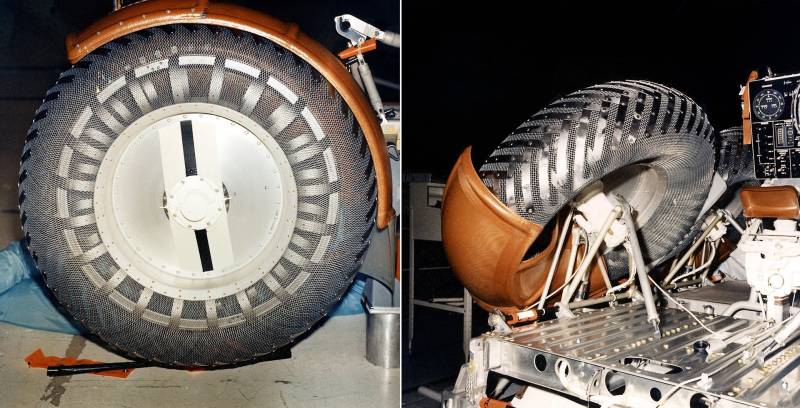 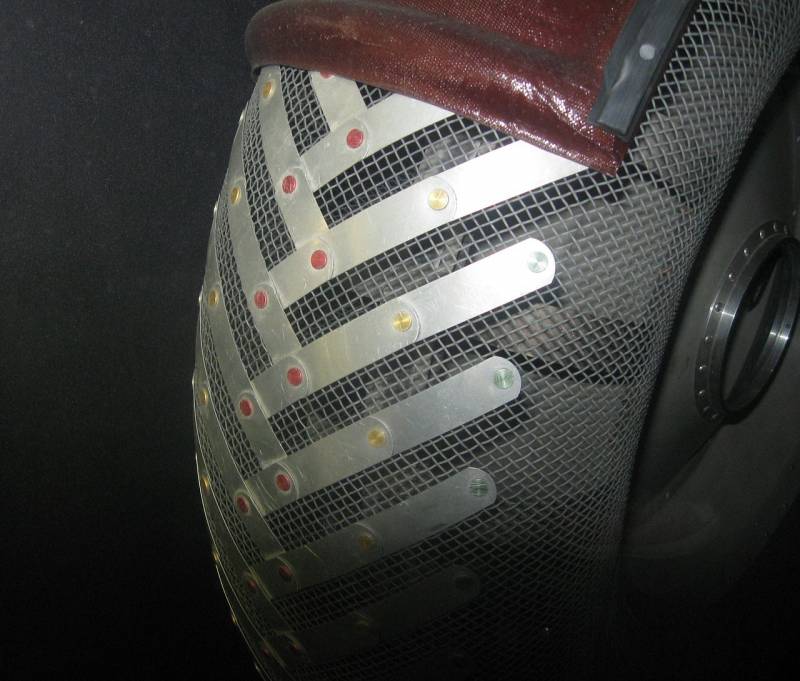 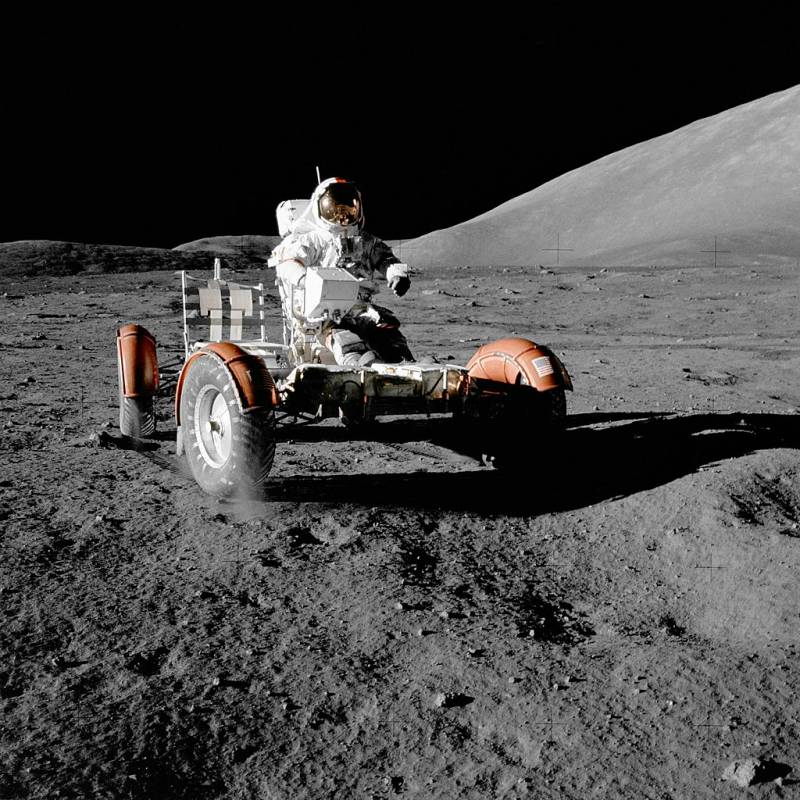 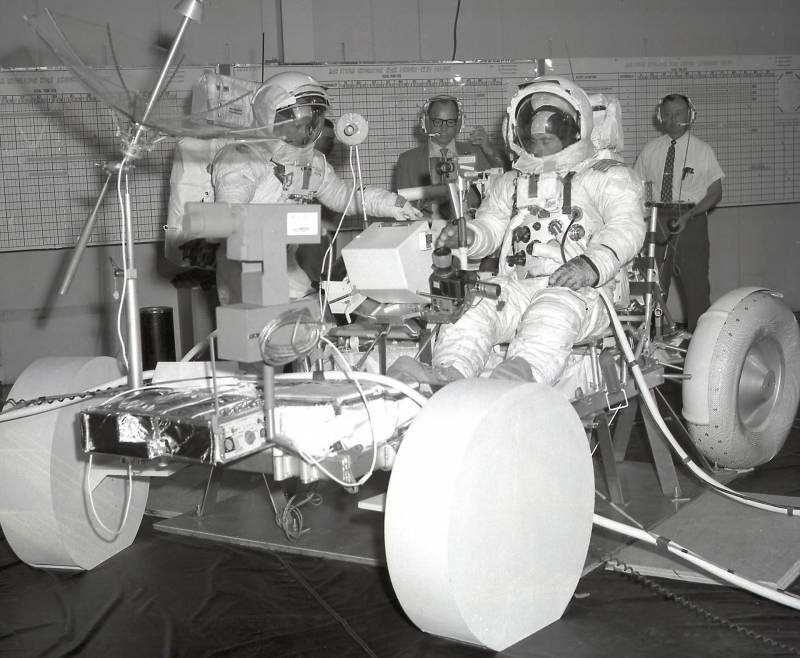 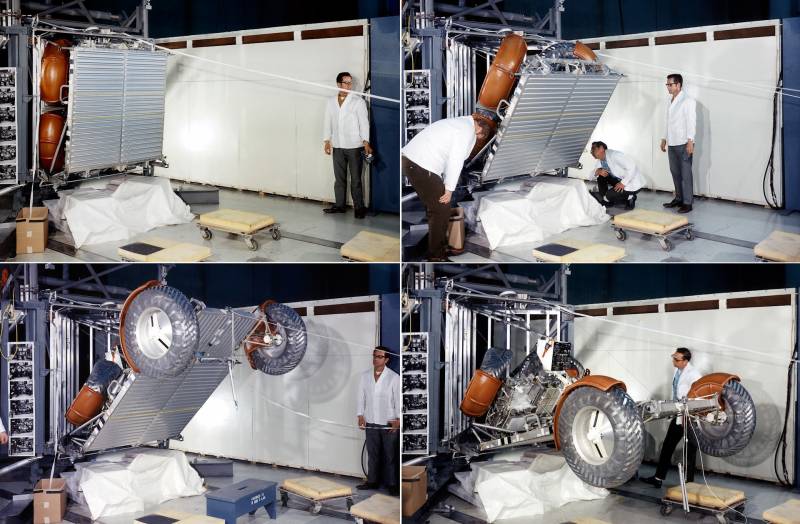 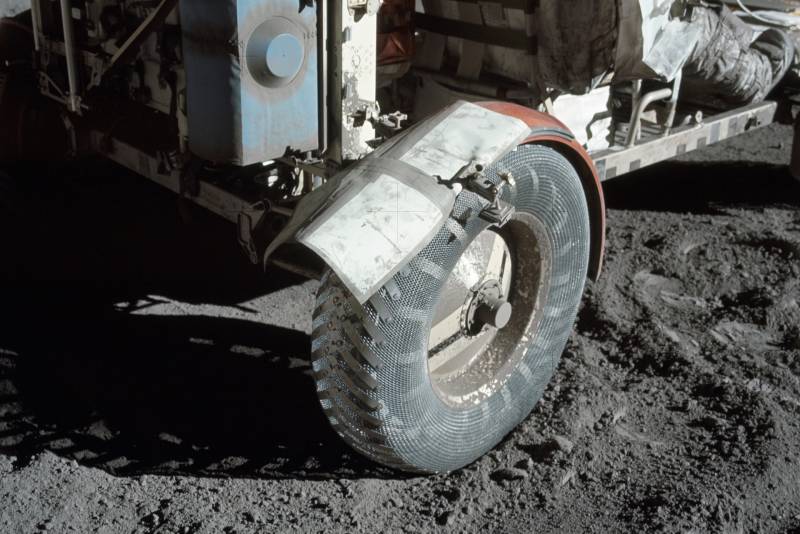 Lunar Roving Vehicle and its parts
A little bit about the astronauts' wheels on the Moon in December 1972. On one of the mini-expeditions, the rover was able to accelerate to an impressive 18 km / h, which forever remained a record. Schmitt, by the way, is still alive, and later spoke flatteringly about the characteristics of the car:

“The lunar rover proved to be the reliable, safe and flexible lunar exploration vehicle that we expected. Without it, the major scientific discoveries of Apollo 15, 16, and 17 would not have been possible, and our current understanding of lunar evolution would be impossible."
However, the Lunar Roving Vehicle still had malfunctions. During missions, the wings above the wheels collapsed on the rovers. It would seem that a trifling breakdown, on Earth they would not have paid attention to it. But on the Moon, wheels without wings kicked up clouds of dust that settled on the astronauts, equipment and the rover itself, threatening even more malfunctions. As a result, part of the wing was fixed with reinforced tape, which, after the lunar mission, gained truly worldwide fame. 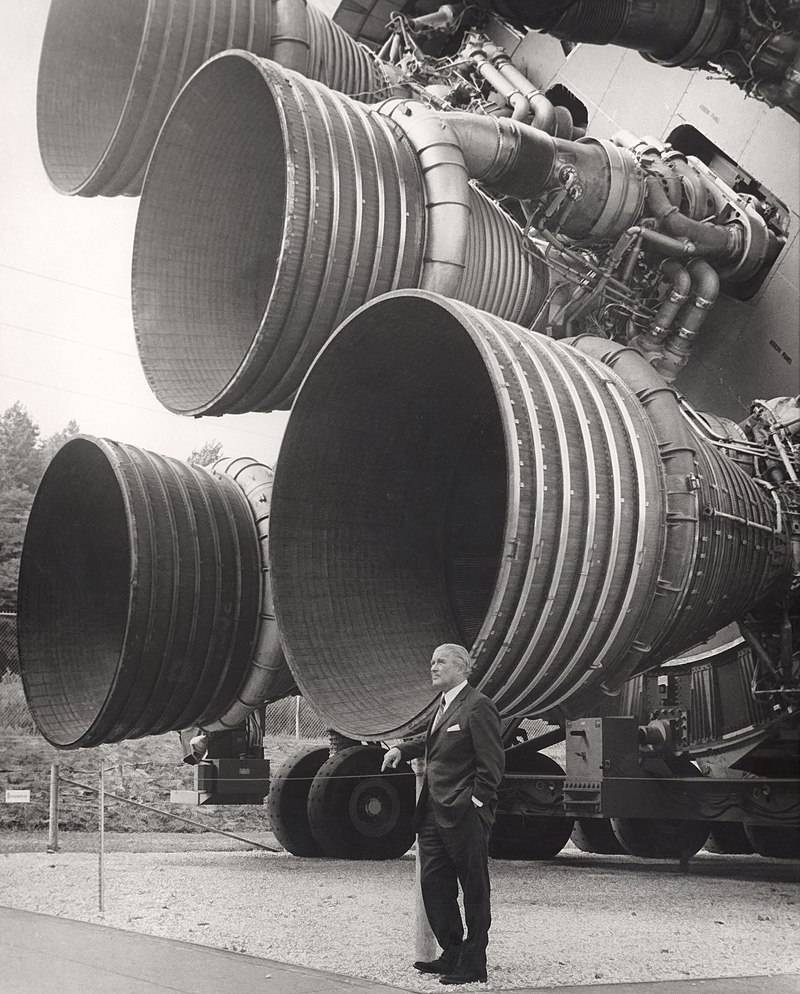 If not for the Nazi Wernher von Braun, the Americans would have flown to the moon much later
Cernan and Schmitt returned on December 14, three days after landing on the moon. During this time, they traveled more than 35 kilometers and collected 110 kilograms of rock samples of the Moon, which researchers still cannot finally figure out. Even in our time, one can still find analytical reports by Russian authors engaged in the study of lunar soil samples delivered 50 years ago.

Was a manned mission to the moon necessary? On the practical side, of course, it did not make much sense - the scientific profit from multibillion-dollar flights was disproportionately small. Someone will say about the technological infrastructure of the mission, which in the future became the basis of the modern high-tech industry. If this is true, then only in part - many solutions, for example, integrated circuits, appeared even before the mission and independently of it. The lunar Apollos, like numerous Soviet space programs, were exclusively political products, born in the era of confrontation between two megapowers. And it was nice. And now we are sorely lacking this.