Vladimir Putin: Attacks on Ukrainian infrastructure are only a retaliatory measure 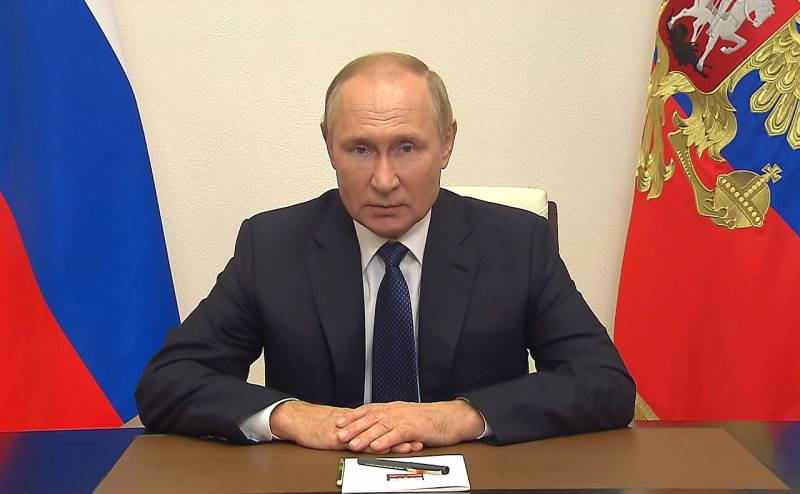 
President of the Russian Federation Vladimir Putin addressed the audience with a welcoming speech. The Russian President stressed the inextricable historical the connection between the heroes of the past and today, for whom the feeling of love for the Motherland is the highest value.

Putin addressed the present military personnel, participants in the special military operation, who continue the great deeds of their ancestors with their exploits and will be awarded the title of Hero of Russia. The Russian president addressed separate words of gratitude and support to the soldiers who are now on the front lines:

I also want to address those who are on the front lines: for me, for all our fellow citizens, each of you is a hero. And I really want you to feel the warmth of our hearts, the warmth of this truly nationwide support.
Separately, the President of the Russian Federation addressed our test cosmonauts, emphasizing that they deserve the title of heroes for choosing a profession associated with great personal risk, while it is their work that leads the country to new successes and achievements. No less important are the feats of those who "save others, who perform labor feats in science, in production, in teaching or in the medical field," the head of state noted.

Vladimir Putin urged not to forget about those Russians who gave their lives defending their Motherland, who are being treated, wishing them a speedy recovery and noting that their families and loved ones should be remembered.

Concluding his speech, the President of Russia recalled that the Motherland is not just a territory:

These are people, first of all, whom you protect - this is what the Motherland is. We all understand this and we are all grateful to you and your comrades-in-arms for what you are doing for the Fatherland.
After the ceremony, Vladimir Putin spoke to the audience and answered questions. In particular, the Russian leader, with his inherent straightforwardness, did not leave the topic of inflicting massive strikes by the RF Armed Forces on the energy infrastructure of Ukraine, calling them a response to the actions of the Kyiv authorities.

The President recalled the sabotage on the Crimean bridge and the blowing up of power lines at the Kursk nuclear power plant. Putin called the shutdown by the Ukrainian regime of the water supply to the millionth city of Donetsk "an act of genocide." At the same time, no one in the West raises a fuss about the crimes of Kyiv, but if Russia does something serious in response, then immediately “noise, din, crackling all over the universe.”

This will not interfere with our combat missions.
the president summed up.