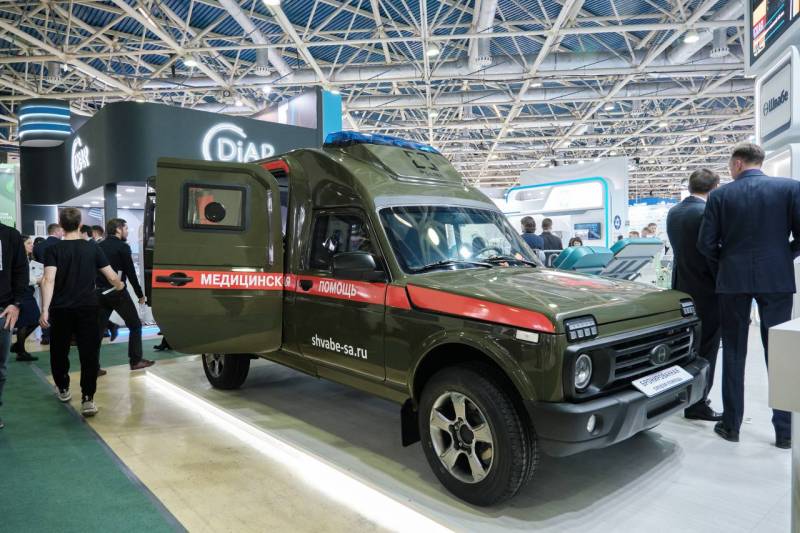 The Shvabe holding from the state corporation Rostec is actively engaged in the medical field. In particular, special medical vehicles are being developed, incl. designed to work in difficult conditions. Recently, the holding has introduced several new machines of this kind, designed to work in the field. The protected medical vehicle on the Niva Legend platform attracted the most attention.

Since last year, the Shvabe-SpetsAvto company (Nizhny Novgorod) has been operating as part of the Shvabe holding. It is engaged in the development and manufacture of special vehicles for various purposes. To date, the company has managed to participate in several major exhibitions and presented interesting samples.

At the exhibitions of this summer, incl. at the Army-2022 forum, the company for the first time showed the Niva KUB NN multi-purpose minivan and the Niva Prima NN ambulance. Both of these products were made on the basis of the Niva Legend car from VAZ. It was reported that such vehicles can be used by the medical service of the armed forces and are suitable for work in the field.

On December 5-9, the exhibition "Russian Health Care Week-2022" was held at the Moscow Expocentre. The Shvabe-SpetsAvto company took part in it and showed several new developments. The central place in its exposition was occupied by ambulances and medical vehicles adapted to work in difficult conditions, incl. off-road and at the risk of shelling.

One of these exhibits was a hidden armored medical vehicle LADA Niva Legend 4x4 KUB, a further development of the previously shown Kub-NN. Like its predecessor, the new vehicle is intended for the evacuation and transportation of the wounded, accompanied by a medic. She is able to move on the highway and off-road. This provides for ballistic protection of habitable compartments and vital units, allowing you to work in hazardous areas. 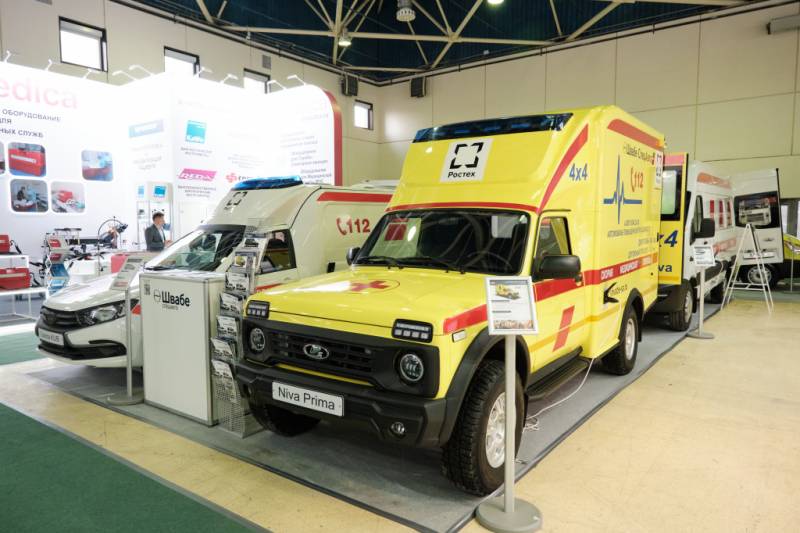 A new line of medical vehicles from Shvabe-SpetsAvto
The armored Niva, like several other similar models, was created against the backdrop of the ongoing Special Operation in Ukraine and taking into account the needs of the army's medical service. The development company notes that current events pose special challenges for the industry, and they are successfully solved.

The prospects for the new car remain unknown. Probably, while there is only one copy, assembled for exhibition and demonstration to potential customers. However, after receiving the order, Shvabe-SpetsAvto will be able to quickly set up production at the required pace and in the required quantities.

The special car Niva Legend 4x4 KUB is based on the chassis of the same name. The base machine retains a number of key components and assemblies, but a major design change and the introduction of new elements are envisaged. In one way or another, the chassis is being finalized, a new van is installed instead of the rear part of the body, armor is mounted, etc. It is curious that the installation of protection has practically no effect on the exterior of the car - it is as similar as possible to the previously presented KUB NN product.

The Kub-NN project provided for the preservation of a standard power plant with a VAZ gasoline engine with a capacity of 87 hp. The old mechanical transmission with all-wheel drive is also used. The design of the chassis does not fundamentally change. With all this, the new van body required to lengthen the chassis and increase the wheelbase.

A three-volume bonneted van body is used, made using some parts of the serial Niva. The driver's cab and the lounge for the wounded are separated by a partition. Both volumes are thermally insulated and air conditioned.

Unlike previous special vehicles, the new Niva Legend 4x4 KUB gets protection. The driver's cab and interior, engine shield, fuel tank and battery are covered with steel armor with protection level Br3 - from 5,45-mm automatic bullets or shrapnel with equivalent energy. All armor parts are installed discreetly, under the body panels. 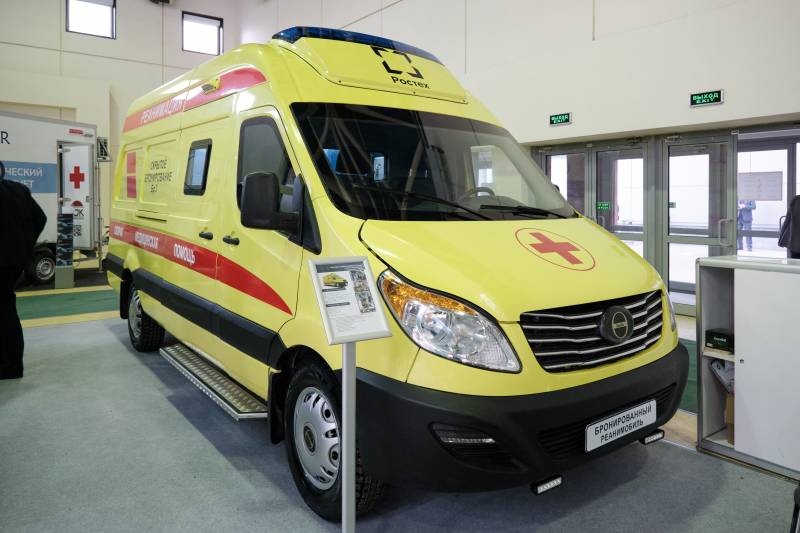 Protected vehicle based on MAZ-365022
The van layout allows you to get the maximum possible volume of the rear cabin to accommodate patients and doctors. The cabin provides for the installation of a stretcher or wheelchair, as well as comfortable chairs. The car transports various equipment and medicines for first aid. The possibility of transporting up to four patients, probably sedentary, is declared. The available space is enough for only one bedridden person with accompaniment.

Access to the salon is provided by a door on the starboard side and a swing door in the stern. It is noted that the Niva Legend chassis has a limited clearance, which reduces the floor height and simplifies landing or loading, incl. in difficult conditions.

According to available data, the total mass of the armored vehicle exceeds 1,6 tons, which is significantly higher than that of the base commercial vehicle. At the same time, the preservation of high running characteristics is declared. The maximum speed on the highway exceeds 100 km / h, the car is able to move off-road and overcome various obstacles. Probably, due to the increase in mass, the medical vehicle is inferior to the base Niva Legend in cross-country ability.

For the front and for the rear

A new line of covert armor medical vehicles, including the LADA Niva Legend 4x4 KUB product, was developed to equip the vehicle fleet of the medical service of the armed forces and other law enforcement agencies. Probably, the manufacturer has already presented this technique to military doctors and is waiting for their decision. What it will be is too early to say. However, it is clear that the new design has both strengths and weaknesses.

The most important feature of the new project is the use of a serial commercial platform. This seriously simplifies production, and also allows obtaining sufficiently high technical characteristics. Also, unification has a positive effect on the operation, maintenance and repair of equipment. In addition, the training of drivers and technical personnel is simplified in a known manner. 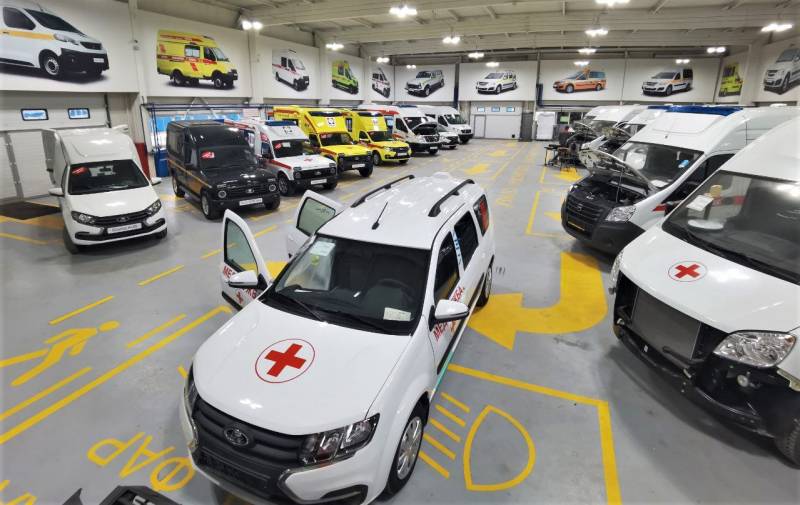 Products "Shvabe"
On a modified serial chassis, it was possible to install a voluminous van with comfortable accommodation for people and the necessary equipment. At the same time, habitable compartments receive protection from widespread small arms weapons and some explosive devices. It is noteworthy that the appearance of the Niva Legend 4x4 KUB does not indicate the presence of protection.

However, you can also find disadvantages. So, "Niva" is constantly criticized for insufficient engine power. In the case of a heavier medical vehicle, these problems can manifest themselves more clearly, especially off-road. The characteristics of the engine also limit the possible load capacity. As a result, relatively thin armor is used, protecting only against machine guns. Installing a more powerful protection without loss in other characteristics is virtually impossible.

It is unlikely that the proposed machine will be able to work effectively at the forefront, which is characterized by bad roads or rough terrain, as well as constant shelling from the enemy. However, LADA Niva Legend 4x4 KUB can be used in the near rear, where the risks of shelling are reduced, but still remain relevant.

It is under such conditions that it will be possible to realize all the advantages of an operational nature, as well as reduce the negative impact of objective limitations and shortcomings. At the forefront, in turn, other vehicles with higher performance characteristics, such as the Lens serial armored car, should work. The presence of several models of equipment with different capabilities will allow you to create a more efficient system of evacuation and assistance, which has an advantageous ratio of different parameters.

Thus, by now, the already considerable catalog of Shvabe-SpetsAvto products has been replenished with several armored medical vehicles. They are able to work in combat zones and carry out the evacuation of the wounded, reducing additional risks. With all this, the new technology is built on existing platforms, which provides well-known advantages.

As far as we know, so far the LADA Niva Legend 4x4 KUB exists only as a prototype for testing and exhibitions. It is very likely that in the near future he will be of interest to potential customers and go into series. As a result, military doctors will have another useful machine that can positively affect the results of their work.