The troops receive new T-72B3: the problems of dynamic protection have somehow begun to be solved 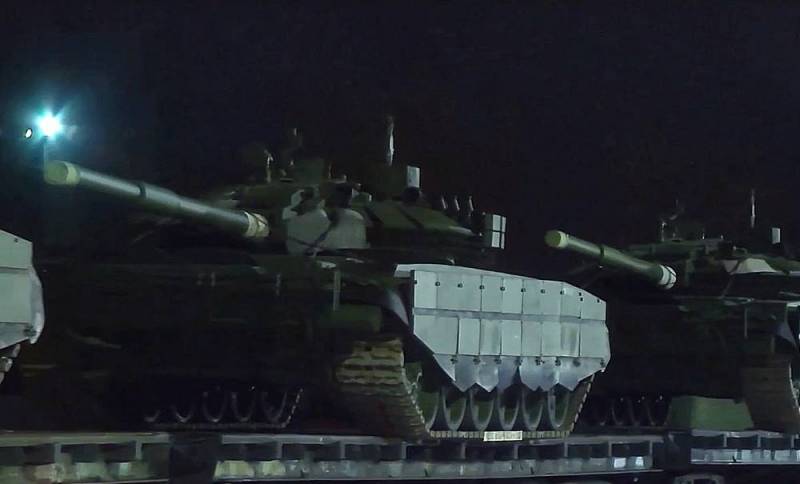 Not so long ago, photos of modernized vehicles loaded onto railway platforms appeared on the net. tanks T-72B3, which are less and less reminiscent of the original version of this machine in 2011. And, as is clear from the title, and from the pictures themselves, too, a characteristic feature of the new "Be-Three" was the total body kit of their hulls and towers with dynamic protection.


It’s better not to even talk about how long the discussions about the far from ideal location of “reactive armor” on tanks last. Let's just say: finally, at least some progress in this matter began to appear. Yes, without the “Relic” that has become a byword, and not without controversial decisions. But already something. However, let's get to the point.

Still, the experience of "Slingshot" and T-90M would be useful

First of all, I would like to note that in this material there is no talk of any discrediting of tank builders. The fact that our manufacturers were able to establish a stable production of the same modernized T-72B3 and T-90M is a big plus, respect and respect. This is important, since NATO does not plan to reduce the volume of arms supplies to Ukraine. Including tanks, which, how we calculated, Europe has enough for 3-4 brigades. So what we need is not even parity, but superiority in quantity and quality. And we can achieve it. Not without cost, of course.

Now on to the case.

More than a month ago, a Vesti report was released on the federal channel from the workshops of Uralvagonzavod, where T-72B3 tanks being upgraded to the new standard got into the frame. They are made, if anything, from the T-72B / B1 - the most armored serial vehicles of the "seventy-two" family.

Upgraded T-72B3. The additional dynamic protection in the area of ​​the machine gun embrasure and the gun mantlet is clearly visible. Source: otvaga2004.mybb.ru
Quickly scattered across thematic forums, the screenshots of this video caused a lot of questions from the public interested in armored vehicles. Chief among them: the forehead of the tank did not receive the coveted dynamic protection "Relic". Here, of course, there is a double-edged sword, since the regular "Contact-5" in many cases, specifically in the NWO zone, is quite enough, and just the less protected projections - sides, feed and, if possible, the roof - require more protection. But the rejection of a more modern "reactive armor" complex, especially when the same T-80BVM is fully equipped with it, looks strange. Still, a more favorable overlap of the forehead of the tower and increased security are also needed by the “seventy-two”, and the “Relic” itself has already been tested on the T-72B2 “Slingshot” - if you wish, it is quite possible to install. 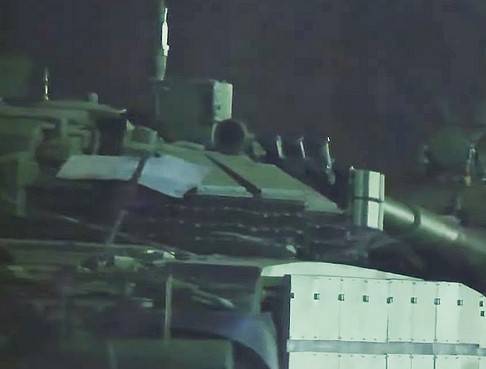 Anti-cumulative mesh screen in the front of the upgraded T-72B3. Source: otvaga2004.mybb.ru
But changes in the set of dynamic protection for the tower still took place. And it's not just about anti-cumulative nets a la T-90M. As you can see, the right "cheekbone" of the tower received a reduced DZ block in the area of ​​​​the embrasure for a machine gun. But this was not the end of the matter.

One of the weakest zones in the frontal projection of the tank is the gun mantlet area. Combined booking is almost completely absent there, and the thickness of the steel mass cannot give any kind of direct confident protection against cumulative weapons. And here the same "Relic" would have looked a little more profitable, but for lack of fish and cancer - a fish, as they say.

To increase the security of this zone, DZ "Contact" blocks were installed to the right and left of the gun (parallel to its axis). Considering that the projectiles in the blocks are both at an angle and horizontally, this "hole" in the turret armor is partially blocked.

Additional dynamic protection in the area of ​​the gun mantlet. Source: otvaga2004.mybb.ru
However, here the experience of installing a "beak" on a gun like the T-90M would be useful. At the very least, dynamic protection in it can be installed more rationally, and it would also be mobile - it would rise and fall along with the gun. 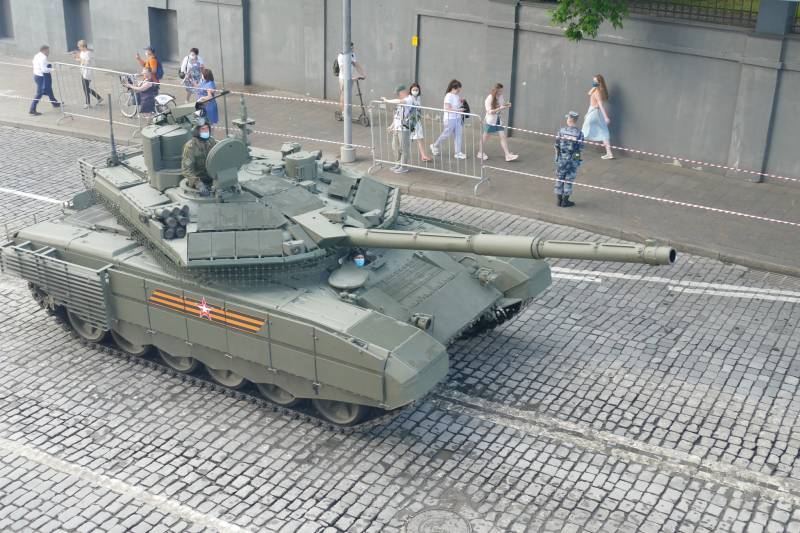 "Beak" in the area of ​​​​the mask of the gun of the T-90M tank. Source: sibnarkomat.livejournal.com
By the way, above the cannon, already on the roof of the tower, a number of Contact blocks were also installed. It's the right thing, but then again, why "Contact"? Something fresher.

Turning to the topic of the protection of the sides and other weakened projections of the updated T-72B3, it is necessary to dwell on dynamic protection in the area of ​​fenders and sloths. In fact, the issue of providing at least some kind of anti-cumulative resistance of this zone has been hanging for a very long time - since the days of the Soviet Union.

In this place, a combat vehicle, even one equipped with reactive armor, is what is called a “passage yard”. Getting into the sloth area in the heading angles of the tank maneuvering, the cumulative projectile (and the sub-caliber, in fact, too) encounters practically no resistance - at most the caterpillar itself and the sloth, and this is at best. And then a completely open side, the thickness of which for a cumulative jet, albeit passing at a certain angle, is not very significant.

Until recently, this problem at the level of mass production was not solved at all, therefore, even in the zone of the special military operation in Ukraine, handicraftsmen are trying to get rid of this flaw on their own, “sculpting”, for example, the same “Contact”. 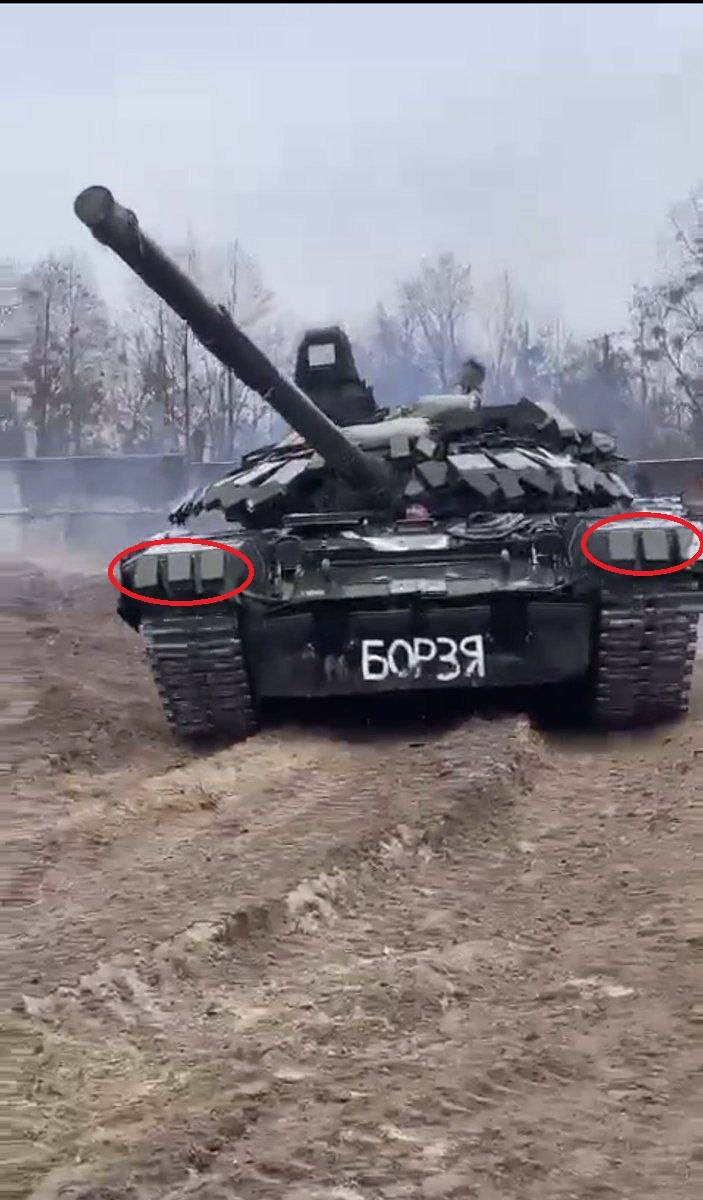 Handicraft modified "seventy-two" with dynamic protection over sloths. Source: topwar.ru
For the first time, standardly installed dynamic protection (in the series, of course) for these weakened zones appeared on the T-90M, and now it has also migrated to the new T-72B3. Well, it remains only to express gratitude to the teams of the Research Institute of Steel, Uralvagonzavod and all those involved who paid attention to this aspect. 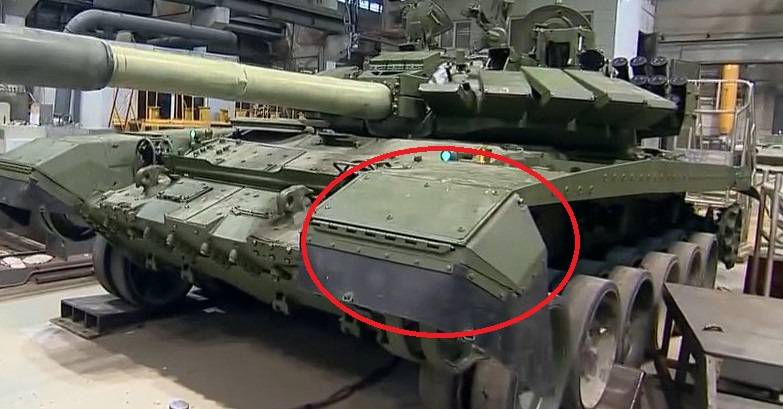 Dynamic protection in the fender and sloth area on the updated T-72B3. Source: otvaga2004.mybb.ru
Well, as for the rest of the sides of the tank hull, then, as we can see, the dynamic protection units are attached almost along the entire length to the very stern. Earlier, we recall, in the area of ​​\u7b\u50bthe engine compartment, the sides were protected exclusively by anti-cumulative lattice screens. At the same time, it must be understood that the main purpose of the gratings is protection against anti-tank grenades of the PG-XNUMX type, which with a probability of about XNUMX% can be neutralized without detonation by these very gratings. In all other cases, the screens work like platoon ones and do not really provide any security.

Overlapping of the board with dynamic protection along its entire length. Source: otvaga2004.mybb.ru
Replacing lattice screens with dynamic protection is the right decision. In heading maneuvering angles, this looks much more useful. It remains to be hoped that, in addition to this, the vehicles along the entire length of the sides will be equipped with dynamic protection in a soft case - the very “bags” or “backpacks” that have already become an indispensable attribute of the T-72B3, T-80BVM and T-90M. These gizmos are designed to counter HEAT munitions when fired into the side at a right (or so) angle and can, according to various estimates, give the equivalent of 600-700 mm from HEAT jets. At the same time, the presence of regular on-board dynamic protection increases these indicators even more.

But there are no changes with the stern of the hull - the lattice screen and the log are still the same.

The stern of the hull is practically unchanged - gratings and a log. Source: warfiles.ru
As for the tower, there are fewer compromises there, at least because they decided to wrap the “head” with dynamic protection around. In the standard version of the T-72B3 model of 2016, the DZ, in addition to the forehead itself, was placed on the sides of the tower. These are the same rectangular steel boxes in which explosive projectiles were installed at some inclination from the vertical to provide protection when fired at a right (or so) angle, similar to a remote sensing weapon in a soft case.

Now these "boxes" cover not only the sides of the tower, but also its aft part. And, I must admit, the idea is useful. This is primarily a safer fire maneuver without exposing weak areas for the enemy. Although even in the case of a turret turned at 12 o'clock and direct shelling at its side or stern, such a remote sensing, for example, can completely protect against monoblock grenades.

The circular arrangement of dynamic protection on the tower of the updated T-72B3. Both standard "boxes" and "Contact" are visible in the area of ​​aerosol grenade launchers. Source: otvaga2004.mybb.ru
You can also notice that the side of the T-72B3 turret at the location of the Tucha aerosol grenade launchers has also received reinforcement. True, no longer "boxes" with dynamic protection, but "Contact" blocks. The decision is explained simply - they did not increase the width of the tower.

In fact, innovations in new batches of T-72B3 are not limited to exclusively dynamic protection. For example, from what is visible from the outside, this is the mechanism for automatically opening the armored shutter of the Sosna-U sight, which until then was fastened exclusively with bolts and, accordingly, was opened manually. Also, the heads of some devices or antennas appeared on the tower, the purpose of which is still not really known.

In general, it is too early to talk about the full scope of modernization.

Dynamic protection, in contrast to the "internal", we see. Yes, "Relic" has not yet registered for "be-three", but let's hope that in the end it will still appear on these tanks.

As for the rest, with regard to protection in the area of ​​​​the gun mantlet, equipping the sides of the hull with DZ and the circular overlap of the tower with it, the steps are correct. Of course, not everything is perfect, but there are some thoughts that these events were done in an accelerated mode, so the ideas need to be insisted, go through all the bureaucratic obstacles and turn into a worthy product.

The only thing left to do is to wait, because the equipment does not show off at exhibitions, but participates in battles, therefore, the natural selection of all its improvements takes place in an accelerated mode.