Shoot as far as possible: the French 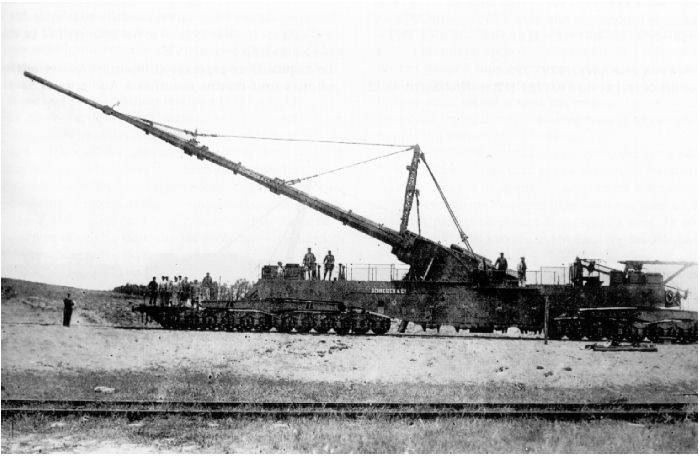 Ultra-long-range gun of the firm "Schneider". It had a bonded 210 mm barrel, one third of which was rifled and the other was smooth. The gun could conduct aimed fire only from a curved railway track, and preferably a v-shaped one, since only in this case a sufficiently significant angle of fire was obtained

“The shot was silent. But the return
fantastic carriages swept underground roar,
like a terrible earthquake. This blow was marked
seismographic stations even in Mexico.
In many cities in neighboring countries
the alarmed wall clock stopped.
Alexander Kazantsev "Flaming Island"
Heavy artillery of the First World War. And it so happened that in March 1918 a Commission was created in France to study guns that could shoot at a very long distance. The reason was more than relevant: on March 23, 1918, German troops began shelling Paris from the Kaiser Wilhelm Pipe ultra-long-range gun. In addition, it turned out that the German 35,5 cm and 38 cm guns that were on the battleships were also significantly superior to the best French naval guns since 1916, and something had to be done about this too.

The result of the work of the commission was an order to Saint-Chamond and Schneider firms for long-range guns, which received the French designation TLP (very long-range guns). Already in June 1918, tests were carried out on 37 mm guns with barrel lengths L/100 and L/160 to evaluate the internal ballistics of very long barrels.

And at the end of 1918, an experimental 60-mm L / 145 cannon fired as many as 80 shots at an initial speed of 1 m / s before its barrel was worn out. As a result, by the time the armistice was concluded in November 170 with the TLP guns, the French had not achieved any special results, although they had no shortage of projects. But they began to engage in them after the truce. For this, five 1918-mm L / 340 Mle 45 barrels were allocated, which were made for the Normandie battleships, which the French did not begin to build with the end of the war.

The Schneider TLP designs used a carriage designed for nine 340mm Mle 1912 railroad guns delivered to the Army in 1919. It weighed 270 tons and used recoil-absorbing wooden mounts, a system similar to that used on many railroad carriers of the time. The obvious problem of the Schneider conveyor was the complete lack of horizontal aiming, so it was possible to shoot only from a curved railway line oriented to the target.

The company's designers decided to reduce the 340-mm caliber to 240-mm, 210-mm and 224-mm calibers, that is, to create a weapon similar to the "Kaiser's Pipe ...". Three different TLP guns were made in great secrecy from 1920 to 1929, and made in secret because the French were concerned about the British reaction to the development of guns that could bombard Channel ports from France. However, the work was already very slow, as defense spending was greatly reduced after the First World War.

The resulting gun had a caliber of 240 mm, although its barrel was from a 340 mm gun. Tests took place in 1924 and were disappointing. The maximum achieved range of the projectile was about 50 m at a barrel elevation angle of 000 °. 37-kilogram shells for the cannon had a single strip of finished rifling, similar to the German "Wilhelm's Pipe".

The projectiles in this and other long-range guns experienced such a strong acceleration when fired that ordinary copper belts could not be used, as they were torn off the projectile when fired. The German solution, copied by Schneider, was to use rifling on the shell of the projectile, which, when loaded, neatly engaged with the rifling of the gun barrel.

Another problem for the TLP project was finding a firing range for such a long range. In the end, they decided to place the guns on Saint-Pierre-Quiberon, a peninsula in southern Brittany, and fire to the west so that the shells fell into the Atlantic Ocean. To monitor the shots, a whole series of observation stations was created on the southern coast of Brittany. An underwater microphone network was also equipped there to record the sound of a projectile hitting the water.

In 1921, a 210-mm gun was tested. The initial speed of the projectile turned out to be equal to 1 m / s, but the maximum achieved firing range turned out to be small due to the fact that the projectiles tumbled in flight. It was found that the 339 mm barrel wears out very quickly, so the gun was returned to the factory to be replaced with a 210 mm caliber. Tests of the 224 mm gun in November 224 made it possible to achieve a firing range of about 1927 m.

Again, this range was obtained during the firing of 1929 and 1930. However, in June 1930, the gun experienced severe overpressure in the breech, which, as it was found on examination, was caused by severe wear of the rifling in this place. After the inspection, the specialists of the Schneider company came to the conclusion that it makes no sense to repair the gun. 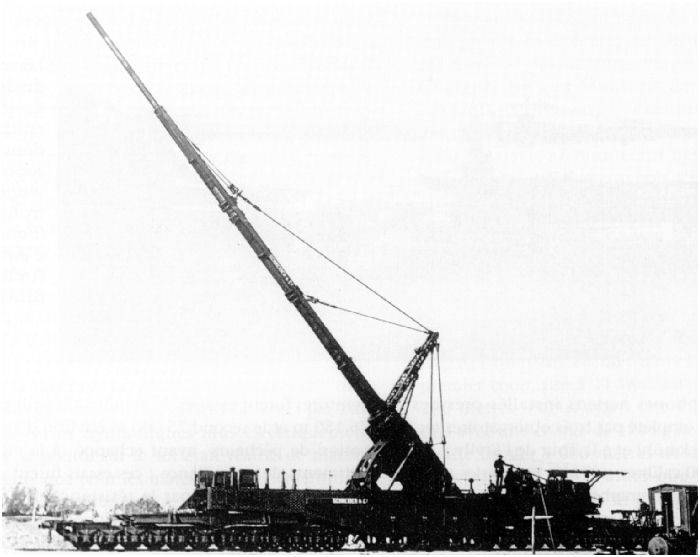 A Schneider gun before firing. It turned out that at an elevation angle of 50º, the projectile flies part of the way in the stratosphere, where air resistance is minimal. This is what allowed the German ultra-long-range guns, and now also the French cannon, to send their shells over 100 km
A gun with an L/150 barrel was a gun with an L/100 barrel plus an L/50 smooth barrel attachment. The carriage was changed so that it became possible to lift the barrel at an angle of 50º. It was possible to charge it with a barrel elevation of 16,5 °.

Interestingly, the smoothbore barrel extension was transported on a separate machine, and before firing they had to be screwed together. The rigidity of the barrel was provided by adjustable cables, again, everything is exactly the same as that of the Germans. The French couldn't come up with anything better.

The first tests were carried out in March 1929, when seven 150 kg shells were fired at ranges from 71 m to 000 m. In November 107, two modified 000 kg projectiles were fired at a distance of 1929 and speed 142 118 m/sec. Further tests in 000 were carried out with 127-kilogram projectiles with two strips of finished rifling at ranges from 800 m to 1 m. After 520 shots, the barrel fell into disrepair, and the gun itself was placed in storage. It was still in storage at the start of World War II, and although it was proposed to convert the gun to 1931mm, nothing was done until the German invasion in 146. 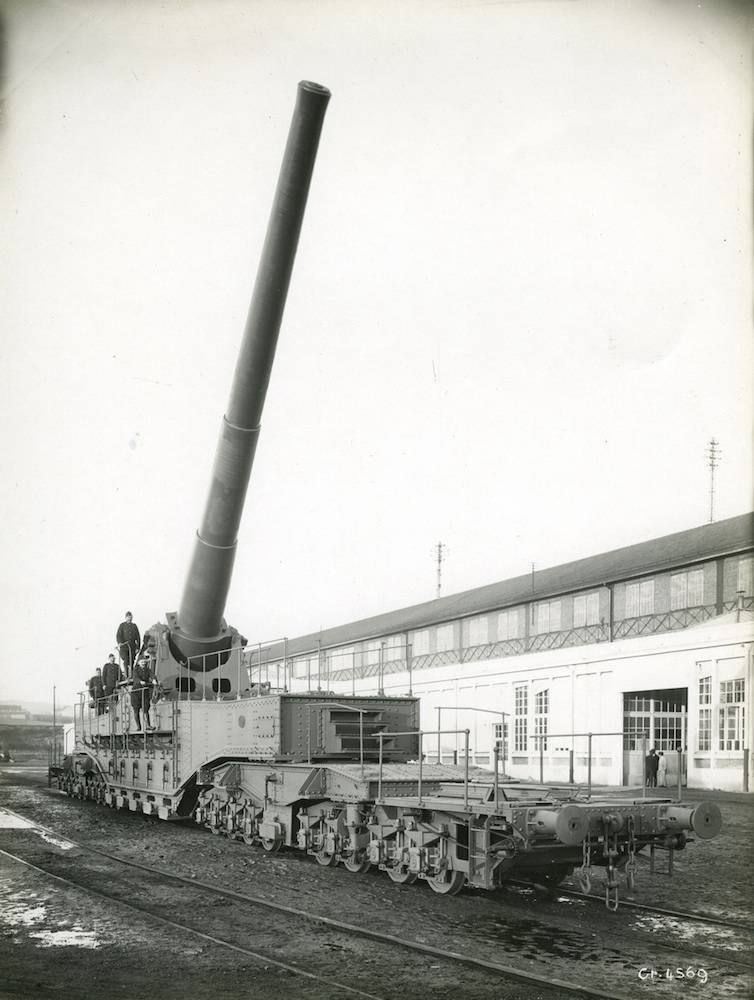 Long-range gun of the company "Saint-Chamond"
The Saint-Chamond approach to the TLP gun was very different from the Schneider approach. Instead of reusing an existing railroad gun carriage, Saint-Chamon engineers designed a new carriage with a central gun platform that could rotate 360° in azimuth. The barrel of the gun retained the usual marine cradle and recoil cylinders, so the preparation for firing, apparently, was limited only by the time of extension of the outriggers, which prevented the carriage from tipping over when firing from the rail track.

The Saint-Chamond project was approved in November 1918, and the only prototype was tested in 1926. The 240 mm L/51 gun reached its maximum firing range of 59 m. But then commercial imperatives intervened. In 000, the Schneider company bought the FAMH (Saint-Chamond) company. The prototype Saint-Chamond TLP gun was sold to Japan in 1924 as a Schneider gun and put into service as the Type 1930 240 mm railway gun.

The Japanese army used this railroad gun to reinforce the coastal defenses of Tokyo Bay. In 1941, she was relocated to the territory of Manchuria to the location of the Kwantung Army, where she remained until 1945. With the beginning of the Soviet offensive in Manchuria, the gun was not in action for long, and soon the retreating Kwantung Army destroyed it.

Transporter "Saint-Chamon". At the base of the platform, retractable beams are clearly visible, under which crates of sleepers should have been folded before firing. It was possible to shoot without them, but then the railway track was subjected to excessively strong impact, and the gun rolled back after the shot for a very long distance
It should be noted that the maximum firing range of the best guns of the French heavy rail artillery (ALVF), which were in service in 1918, did not exceed 37 m for the 000-mm Saint-Chamond guns, while the German guns with a caliber of 340- mm and 380 mm have already reached a range of 355 and 47 m, respectively.