Belarus is also waging its own war 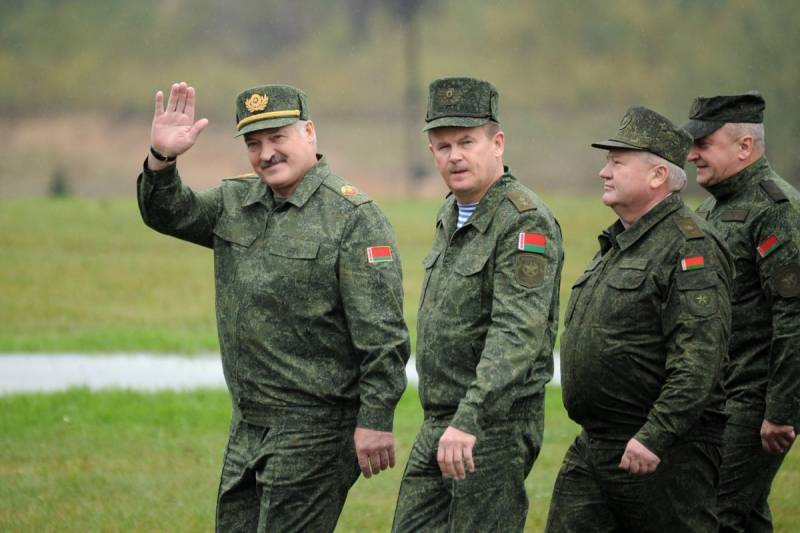 How many tragic and indignant materials appeared in the press after the shelling of Donetsk and Donbas as a whole yesterday. I fully understand the authors of such materials. When civilians are killed, for no reason, just because they live in enemy territory, it's scary. It's infuriating. The heart demands vengeance.


When the descendants of the victors of fascism recognize the SS Galicia division as the liberators of Ukraine from fascism, and their symbols are not fascist, this also infuriates. The brain refuses to understand and accept this fact. How is this even possible? How can one refuse the glory of grandfathers and great-grandfathers? In Ukraine, as it turned out, it is possible.

And do not tell me that the people did not accept it! Accepted, and soon we will see how some connection with a similar name will appear. In which the descendants of those who joyfully marched in 1943 in front of the "fuhrers" of the SS in Lvov will serve. The West, as usual, will come up with some kind of excuse like the absence of fascist ideology in this combination.

It is terrible to see what the Orthodox Christians of Ukraine have become. The very ones who recently reproached us for not participating so zealously in religious celebrations, in church services, religious processions, and so on. It turned out that all this tinsel is nothing more than window dressing.

Now the Orthodox of Ukraine are "crossing"! And they pray for the icons of the saints and the righteous, who accepted death for their faith. They died a terrible death, but did not abandon their God! This is also scary and is not perceived by the brain of a normal person. It also breaks the emotional soul of a person. That doesn't happen. It should not be.

I perfectly see those emotions that go off scale in normal people. They go off scale so much that they turn off the brain. We must start the attack! We must destroy everyone quickly! We must, we must, we must... Somehow other emotions have already been forgotten...

Forgotten were the tears of mothers, wives, children who sent their men to war. Forgotten was the talk about the need for a good preparation of replenishment before being sent to the front line. We have to... No matter what... We are emotional. We demand results here and now. At the same time, after a short time, we forget about it.

But today I want to talk not about emotions. Namely, the "cold head". About what we and our allies can and will do if the need arises, in particular about Belarus. I'm not afraid to say - our only ally for today, really ready for battle.

Having drowned in emotions, we somehow forgot that it is Belarus that is protecting us today in the western direction. It just protects. Masterfully defends. Not giving the NATO countries a reason to start hostilities, but harshly suppressing all provocations, dismissing all accusations and quickly responding to all sanctions.

Belarus should be drawn into the war

Yes, the topic of a possible attack on Belarus has been arising with enviable frequency for several years now. At first, this was part of a plan, which is still being implemented today, to weaken Russian influence in the post-Soviet countries. Belarus was to become the second Ukraine.

We have all seen how the coup attempt was carried out. But President Alexander Lukashenko turned out to be much bolder and firmer than President Yanukovych. He was not afraid to use force to restore order. To restore state power in Belarus.

The West tried to "bite", to play its traditional card about the dictatorship of the president and the absence of democracy, but soon, realizing that the attack was repulsed from this direction, fell silent. Belarusian liberals joined the ranks of Russian and other "fighters" who settled in the West.

The provocation of the Polish and Baltic military in stories with refugees. The harsh response of the Belarusians and their willingness to defend their country sobered the hotheads of Western warriors. They decided to refuse military provocation. All this is history...

But Belarus should be drawn into hostilities, according to the West. This, firstly, should undermine the country's economy and, secondly, will be an addition to the sanctions against Russia, which, although they work, are much less effective than planned. That is why today they so often write about a possible attack by Belarus on Ukraine and, conversely, Ukraine on Belarus.

Theoretically, the idea of ​​opening a "second front" looks really promising. But the practical implementation is clearly lame. Kyiv is well aware that Ukraine simply does not have units that could really break through the Belarusian defense. Fresh and well-trained Belarusians are quite capable of stopping the attackers.

And the 10-strong Russian group will not just stand there. Thus, the second front will be a deadly decision for Kyiv. Resources and personnel, even with the huge help of the West, are simply not enough. Such an attack is possible only according to the scheme predicted in the old joke - we will attack and quickly surrender ...

Personally, I really like the position of the President of Belarus on this issue. On the one hand, and Alexander Lukashenko always emphasizes this, Belarus does not want war and is in favor of peace negotiations. But on the other hand, if the operational situation requires it, Belarus, fulfilling its allied duties, is ready to enter the war on the side of Russia.

At present, there is no such need. This means that the main task of our allies coincides with the interests of the Belarusians themselves. Ensure the security of the borders of the Union State and the integrity of the Belarusian state. Judging by the actions of Minsk, Belarusians understand this. And the words of President Lukashenko about the reserve are not just bravado, but the real result of this work.

Let the “Belarusian balcony” hang over Poland and the Baltic states. But in fact, over the eastern flank of NATO. Alas, we must honestly say that today, as always in the history of this republic, Belarus is a buffer between NATO and Russia. The state that will take the first, most powerful blow!

In this regard, the words of the Minister of Defense of Belarus, Lieutenant-General Viktor Khrenin, which he expressed in an interview with the Belarusian publication SB. Belarus today. Beautifully said, although somewhat unexpected for a military of this level. We must protect our land from war.

“Yes, first of all we rely on ourselves. However, we understand that if help is needed, we have a reliable ally. Therefore, we will continue to take joint measures to prevent military threats to the Union State. At the same time, I want to recall the words of the Commander-in-Chief: "We will fight, fight and die on our land."

Does Minsk need to respond to NATO threats?

So far, there is no question of a direct attack on Belarus. Those statements made by the defense ministers of a number of countries neighboring Belarus are more likely to be designed for domestic consumption. Something from the series "we need to spend more on weapons and the army as a whole." There is nothing new in this. There is not enough money for the military always and everywhere.

Yes, and the position of the United States on this issue is also clearly visible. Why get involved in the war yourself, when the Ukrainians are doing an excellent job with the role of "meat"? That very notorious Article 5 of the Treaty, in the event of a war with an alliance member country, will create many problems for the Americans themselves. It will be necessary to explain their refusal to go to war with Russia.

But this situation can quickly change due to the fault of ... Russia! We are well aware of the attitude of the West to all agreements and treaties. They operate only at the time when the West needs them. As soon as the international situation changes, the West shamelessly withdraws from these treaties unilaterally.

Today, as I wrote above, the US is quite satisfied with the situation in Europe. Ukrainians are cannon fodder, Europeans are a cash cow, Russia is a processing mill. They continue to plunder Ukraine, to eliminate competitors with the hands of Moscow - too. And the fact that Russia has a little more income from the sale of hydrocarbons is nonsense. Those profits go to war anyway. Directly or indirectly, but go.

Of course, if the United States gets a real smell of victory over Russia, the command "face" will be given immediately. A wounded enemy is half an enemy. Although evil, even more willing to kill you, but half. And the pack will attack. This has happened many times in our thousand-year history. And then Belarus will again become the first.

Therefore, Minsk is making great efforts to maintain the high combat capability of its own army. After all, it will take time to deploy the Russian army. And the Belarusian army must win this time with its heroism. But this is a scenario that may never be realized.

A completely different scenario is much more realistic and even already being implemented. This is the destabilization of the internal life of Belarus. It is in the military aspect. They are now trying to bring into the country weapon from the territory of Ukraine. Already several times the KGB reported that they find him in the border area.

Why the Ukrainian special services are doing this is understandable. In one version, it is a weapon necessary for provocations. And in another version, it will be needed at X-hour by saboteurs and detachments of activists who arrive on the territory of Belarus or are already there. And this is not a horror story for the faint of heart. President Lukashenko has repeatedly spoken about such a danger and warned that the KGB would act as harshly as possible in this case.

It is clear that the best thing for the West is to present everything as an internal affair of the Belarusians. In other words, to finish what was planned a few years ago. Again white flags, again crowds of young people on the streets, but already with blood. With skirmishes with the police and specialists - a unified version of the Ukrainian Maidan. So, work for the state security service and the army in Belarus is now a wagon and a small cart.

Everything again rests on our victory

Alas, but everything again depends on our victory. From how the SVO will go. We will win, Belarus will win too. If we lose our country, the same thing will happen to the Belarusians. We are now responsible for two countries, for two peoples. This is the situation in the international arena.

Ukraine has long been fighting against us. I have long been reading a well-thought-out and precise term from one Ukrainian patriot-blogger - “NATO troops”. That is exactly how it is in reality. But today we are not just the Russian army. We are the Union Army. Earlier, before the Donbass became part of Russia, I used this term to mean the union of Russia and the LDNR. Today, the Union Army is the army of Russia and Belarus.