Buggy for special forces from "Argo" 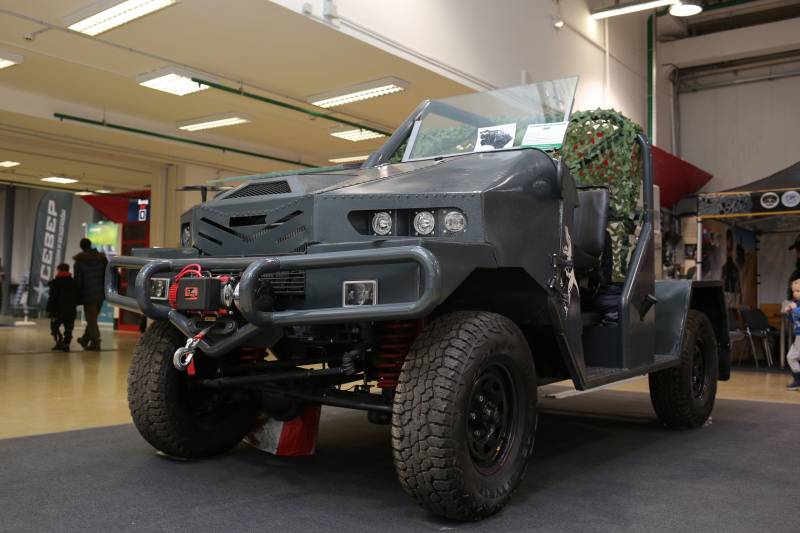 Buggy at the exhibition "All-terrain vehicle-2022"

Some special forces of the army or other power structures need special vehicles, such as buggy cars. In recent years, the domestic industry has developed and brought to production several samples of such equipment, and its creation continues. A new project of this kind was recently announced by Argo. One of its main features was the maximum unification with serial automotive technology.

In early December, Moscow hosted the annual Vezdekhoder exhibition dedicated to automotive and special off-road vehicles. A variety of samples were demonstrated at the event, as well as curious statements were made. In particular, the Argo company spoke about its new vehicle project for special forces.

According to RIA News, Konstantin Bagdasarov, CEO of the company, spoke about the development of a new "mobile tactical platform". This product is a special vehicle capable of transporting people and goods. The platform is made on the basis of one of the serial chassis of the UAZ brand and is equipped with units from an unnamed commercial supplier. The chassis design provides for several different "options".

For the all-terrain vehicle, high performance characteristics are declared. It is capable of taking on board at least 1,5 tons of cargo; in the future, the carrying capacity can be increased to 2,5 tons. High speed and power reserve are demonstrated on the highway. If necessary, the buggy can be transported by helicopter on an external sling, for which appropriate fastenings are provided.

The payload of the vehicle is placed on the rear cargo platform and can be made in the form of interchangeable modules. It is proposed to use different modules, incl. with weapons. The machine is capable of carrying even a 23-mm twin anti-aircraft gun. At the same time, replacing the module is not difficult and takes only a few minutes. 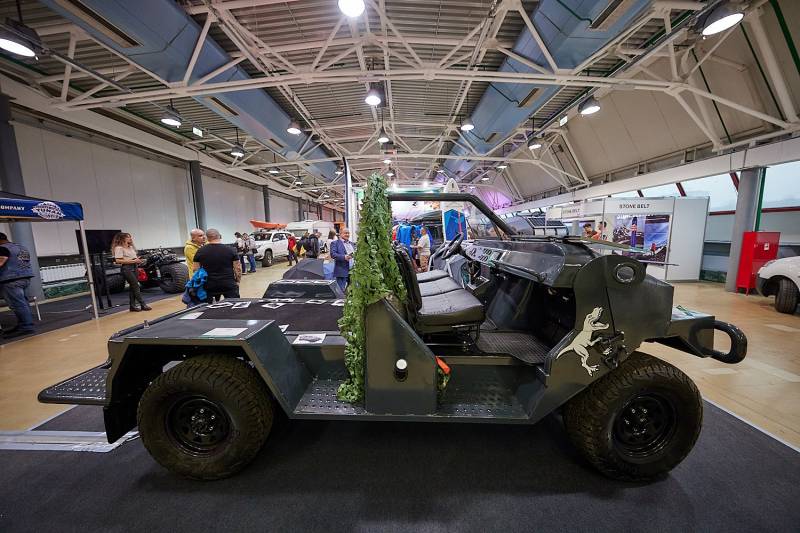 The CEO noted that the Argo company is now capable of building up to 40 new buggies per month. If necessary, it is possible to expand production to increase supplies - in case of obtaining a large contract. However, interest from real customers has not yet been reported.

On a ready basis

The exhibition also showed a finished sample of the new car. It has a fairly simple and utilitarian appearance and design, but generally meets the requirements. In fact, an open wheeled platform is shown with several places for the crew and a large platform for payload or any special equipment. At the same time, in the appearance of the car there are familiar features of the serial UAZ "Hunter".

The buggy can be equipped with internal combustion engines, gearboxes and transfer cases from the product line of one of the commercial suppliers. This simplifies the production and maintenance of equipment. In addition, the availability of a range of units allows the customer to choose the optimal configuration of the power plant. In all cases, the transmission provides drive to all wheels.

The undercarriage uses bridges borrowed from the Hunter. A spring suspension is placed on the front axle, and leaf springs on the rear axle. At the request of the customer, the chassis can be supplemented with air suspension, differential locks and final drives. A centralized wheel inflation system is also proposed.

In the military version, the car gets the original body with an open cab and no doors. In the basic configuration, the platform has only the front row of seats. Due to the lack of a roof, safety arcs are placed above them. The cabin gets a low two-piece windshield. The right half can recline - this allows the passenger to fire from a personal weapons. There are no doors, which makes getting in and out easier. 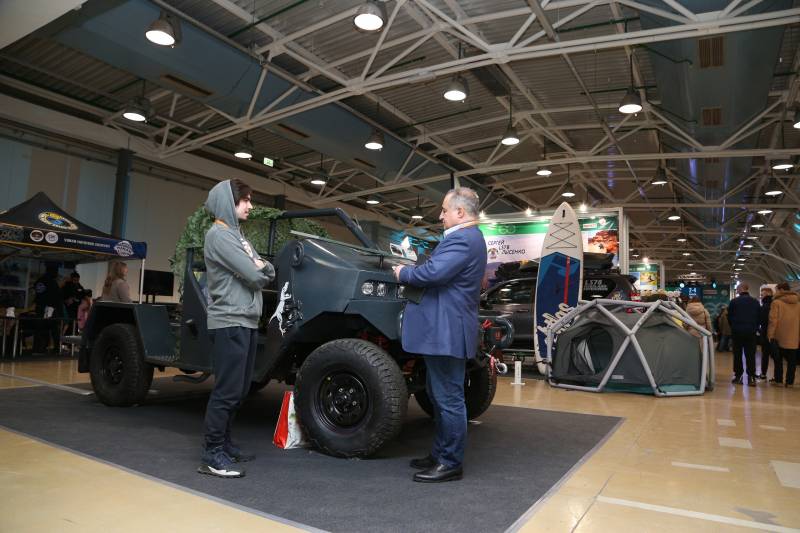 Almost half of the length of the car falls on the stern area for the payload. It is reported about the possibility of installing various modules and tools. The total mass of equipment and cargo can reach 1,5 tons with the possibility of upgrading the design and increasing the carrying capacity by another ton.

However, any payload options have not yet been demonstrated, although the most interesting features have been announced. Probably, customers will be offered a module with passenger seats, various products with attachments for weapons, etc. What modules will eventually be developed and will be able to get on serial equipment is unknown.

On the highway, the buggy can reach speeds of up to 100 km / h. The parameters on the ground are not specified, but it can be expected that in this respect the "tactical platform" is not inferior to UAZ vehicles, from which the running gear is borrowed. Of particular interest is the possibility of transportation by air, originally provided for in the design.

in the hard class

Buggy cars appeared in our army and other law enforcement agencies in the mid-twenties. Such equipment entered the supply of special forces and is mainly used as a light, high-speed and maneuverable transport capable of quickly delivering fighters and the necessary cargo to a given area.

By now, they have gone into the series and ended up in several types of buggy units with different characteristics. First of all, they differ in carrying capacity and the operational and combat capabilities associated with it. At the same time, even the largest vehicles of this class, such as the Chaborz M-6, carry no more than a few hundred kilograms of cargo or 5-6 people. 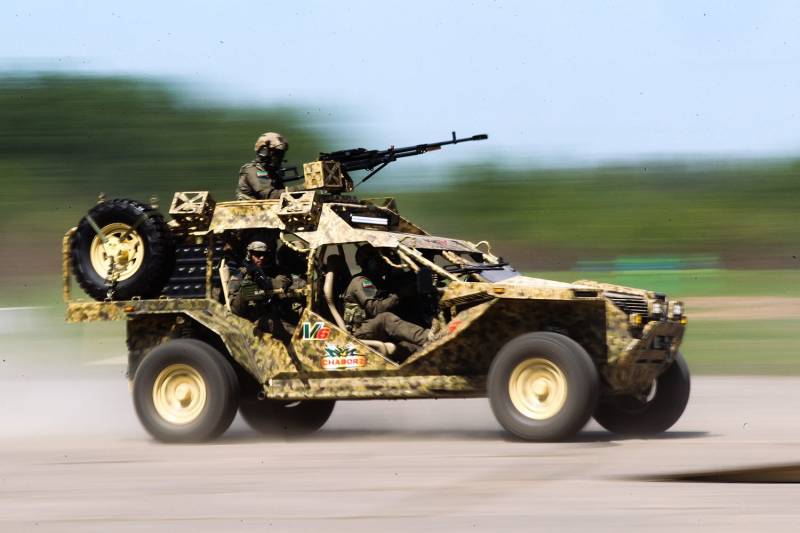 Serial car "Chaborz"
The project of the Argo company proposes the creation of a heavier and lifting platform in the buggy format. Its standard carrying capacity has been increased to 1,5 tons, and there is a possibility of its further increase. Thanks to this, it becomes possible to use equipment of different types with similar running characteristics and different loads in one unit. The advantages of such an approach are obvious.

The increased carrying capacity expands the possible range of payloads. A "heavy" vehicle can carry more fighters or carry some kind of weaponry. If the existing "Chaborzy", etc. can only be equipped with a machine gun, the Argo machine is capable of carrying even small-caliber guns. There is also an opportunity to increase the ammunition load.

The existing buggies of the main types are built on the available units of domestic cars. The new project from Argo uses the same approach. Key components are taken from the production vehicle and/or from a commercial supplier. This gives a favorable ratio of cost, quality and characteristics, and also simplifies the operation of equipment.

As stated, the company-developer already now, at the existing production facilities, can make up to 40 cars of a new type. There are also opportunities to expand production. Such a production potential of the project is largely determined by the use of ready-made units.

In general, the concept of a buggy with increased payload may be of interest to potential customers. If they consider it necessary to expand the existing fleet, then we should expect the appearance of contracts. Shortly thereafter, new vehicles will be able to join existing buggies, increasing the flexibility of the fleet as a whole.

So far, no orders have been received, and the “mobile tactical platform” based on a serial chassis and units remains only an exhibition model. However, even in this status, an experimental car shows the potential of small enterprises in general, and also demonstrates their ability to create new curious samples and work out promising concepts.