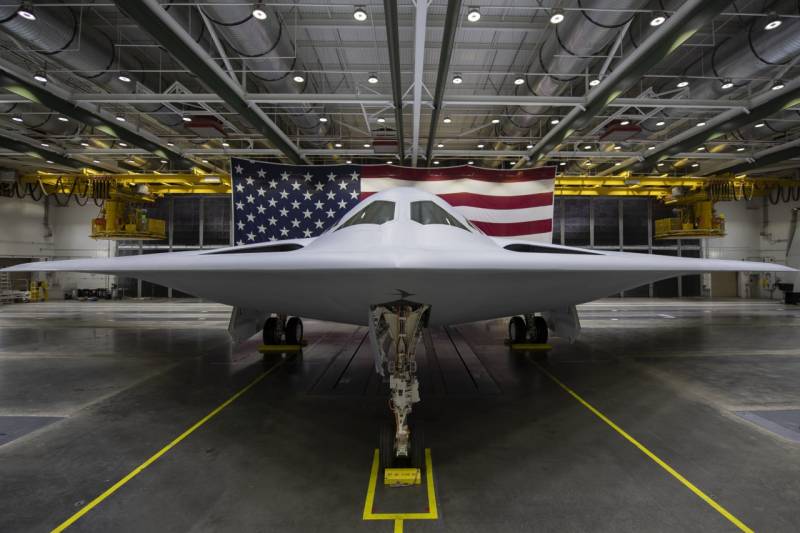 First B-21 on the shop floor

On December 2, the US Air Force and Northrop Grumman Corporation held an official public presentation of the first experienced long-range bomber B-21 Raider. The finished aircraft was taken out of the workshop and demonstrated to the public for the first time. For reasons of secrecy, they did not show it in all its details, but the presentation was also of great interest. For the first time, it became possible to consider a real aircraft, and not its image of an unknown degree of reliability.

From project to presentation

It should be recalled that the development of a promising strategic bomber for the US Air Force has become one of the most complex and lengthy projects of recent times. Preliminary study of this topic started at the beginning of the 2015s, but was suspended. In the tenth, a new program was launched, and in XNUMX, Northrop Grumman Corporation received a contract to develop a full-fledged project and build several prototype aircraft.

By the end of the last decade, the contractor completed the design and began preparations for the construction of prototypes. The assembly of new equipment was entrusted to plant No. 42 (Palmdale, California), which has experience in participating in projects of particular importance. The construction of the first prototype B-21 began in 2019. It took several years to complete.

In early 2022, it was reported that six Raiders were already in various stages of construction. The assembly of the first, which has the working designation T1, was completed in March. After that, the aircraft was transferred to a separate workshop equipped for ground testing, verification and calibration of systems. Such events continued until recently. 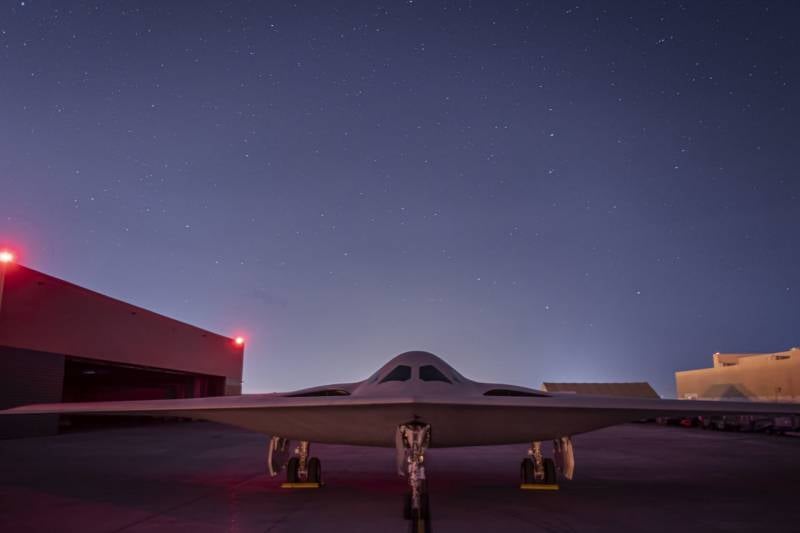 On December 2, at factory No. 42, in a solemn atmosphere and in the presence of Pentagon leaders, the official presentation of the new bomber took place. The plane was rolled out of the workshop and the cover was removed from it. The most daring statements were made about the importance and prospects of the new project, and so on.

It is curious that an experienced bomber was shown from only a few angles. The event was organized in such a way that the aircraft could only be seen from the front corners. There are no other angles in the official photo and video materials either. Apparently, the customer and contractor do not yet consider it possible to show a side projection, tail or upper surface of the aircraft.

However, such a demonstration of the aircraft is of great interest. For the first time, not computer images are shown, but a full-fledged prototype. At the same time, we can expect that in the near future it will be shown from other angles, as well as new information will be revealed that will significantly complement the existing picture.

As has been repeatedly reported earlier, the B-21 project uses ideas and solutions previously implemented by Northrop-Grumman in the B-2A aircraft. Again, the long-range bomber is made according to the "flying wing" scheme with the widespread use of stealth technologies. The dimensions and weight have decreased in comparison with the previous sample. There are other notable differences that point to the development of initial ideas and the application of new developments. 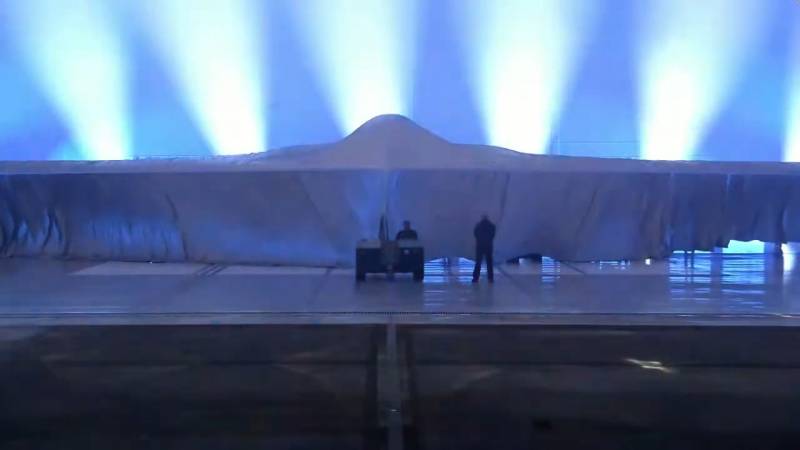 Airplane under cover
First of all, other proportions of the wing and rudimentary fuselage attract attention. Apparently, the wing received a thicker profile, which provided an increase in internal volumes. The upper protruding "fuselage" has a different length and proportions. Unlike the B-2A, on the new B-21, the air intakes were able to fit completely into the plane of the wing, and there are no protruding elements.

The surface of the airframe is made as smooth as possible. Any hatches or removable panels are missing, or well sealed or not visible from the proposed angles. It can be assumed that the aircraft receives all the necessary electronic systems, but their antennas are hidden under radio-transparent panels and fairings.

Officials said that the aircraft's avionics have an open architecture, and this will allow for further upgrades and new functions. Earlier it was reported that even an unmanned modification of the B-21 may appear in the future. Now the possibility of performing both shock and reconnaissance missions is mentioned.

However, the first prototype aircraft remains manned. The double cockpit in the nose of the airframe received specific glazing. Panels of reduced size and complex shape are used. It can be assumed that such a glazing option reduces radar visibility, but at the same time worsens forward-downward and sideways visibility. Perhaps the lack of visibility is compensated by the capabilities of modern instrumentation.

A new chassis has been developed for the B-21. The three-point scheme has been retained, but the main racks received only two wheels each instead of the two-axle bogies of the predecessor. In addition, the doors of the landing gear compartments do not have characteristic broken edges associated with a decrease in visibility. 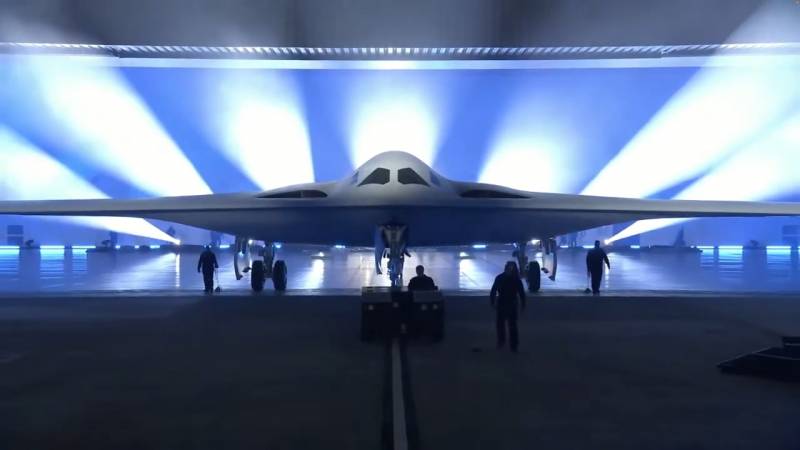 Since March, the first prototype T1 bomber has been undergoing the necessary ground tests. They were briefly interrupted for an official presentation, and now the aircraft is returning to the test station. Various checks are ongoing and may take several more months.

Based on their results, the B-21 will receive permission to enter flight tests. The first flight is scheduled for next year in 2023, but the exact date has not yet been named - and may not yet be determined. At the same time, a crew has already been appointed, which will have to lift the bomber into the air. Test pilot Chris Moss will participate in the flights from the developer company, and Lieutenant Colonel Clifton Bell will represent the customer in the person of the Air Force.

In the future, the following experimental aircraft will join the flight tests. The use of several boards will speed up the necessary checks, as well as work out the possibilities of group use, etc. The full cycle of flight tests of the B-21 should be completed in the middle of the decade.

In parallel with the tests, serial production will be prepared. By the middle of the decade, Northrop Grumman should lay down the first serial bombers, and their delivery to the customer is scheduled for 2026-27. By 2030, the first unit on the new aircraft should reach initial operational readiness. 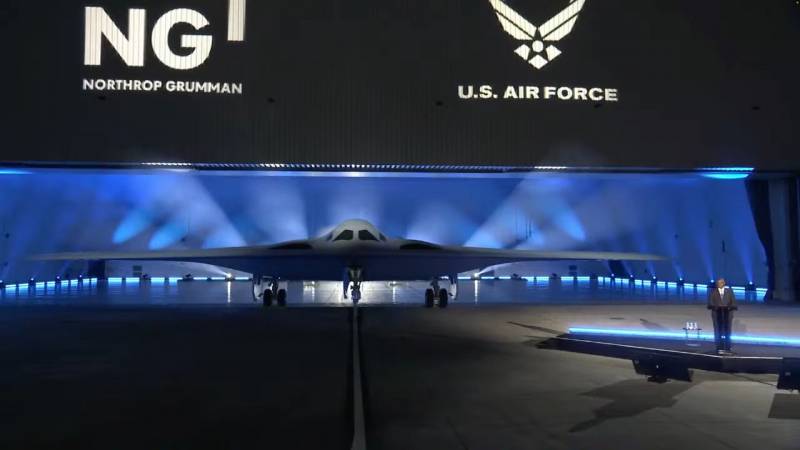 According to current plans, starting in 2025, the Pentagon will annually pay for the construction of six or seven new aircraft. After 2030, the output can be increased to 12-15 units. in year. The required amount of equipment has not yet been determined. The Air Force wants to receive at least a hundred aircraft, and if possible they would like to have twice as many. It is not yet known how many aircraft will eventually be able to find money.

Due to the serial B-21 Raider, they are going to replace the existing B-1B and B-2A aircraft. They will be completely withdrawn from the combat composition of the long-range aviation, and the modern "Raiders" and the newly modernized B-52H will remain in service. How long they will keep such a mixed park is not reported. Perhaps there are simply no plans for such a distant future yet.

Thus, the B-21 Raider bomber project is moving forward. The first prototype has been built and handed over for ground testing, and the assembly of the next few machines continues. In addition, they have already considered it possible to show the first aircraft to the public. The first flight is also being prepared, but its date has not yet been determined. Plans are being made for the distant future, incl. related to the series and re-equipment of combat units of the Air Force.

Apparently, the Pentagon has cause for optimism. The B-21 project will be completed and will allow long-range aviation to be re-equipped. However, several questions remain unanswered at this stage. So, it is not yet known what characteristics and capabilities the new "Raider" will have and how much it will correspond to the original terms of reference. In addition, the final financial indicators of the program and the timing of its implementation have not been determined. As experience shows, in these areas there can be the most serious problems.