Welded tank hatch: fake, bike or something else? 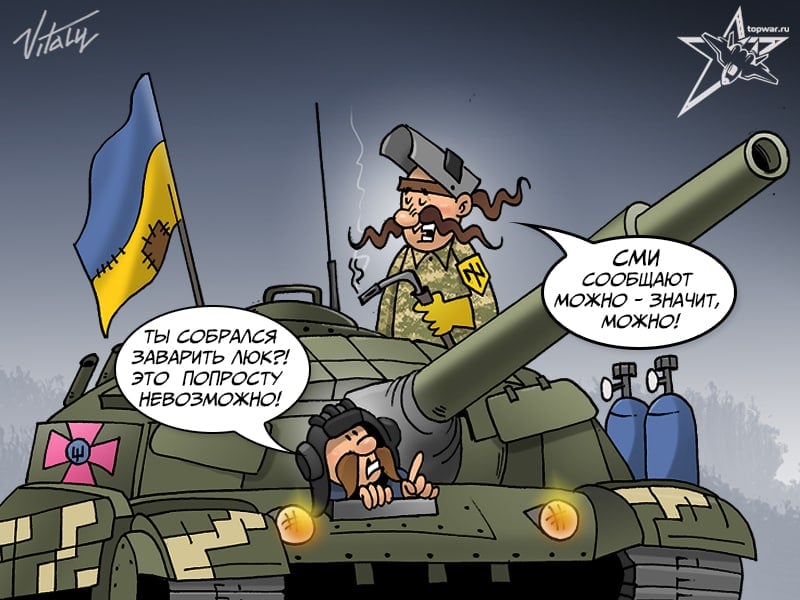 We sat for a long time and thought together, why do we need this? Well, it seems that all Russians should be smart and educated people, why is it that from time to time someone wedges, and such heresy is carried on the air that one involuntarily wants to yell: “Sprinkle the country!”. 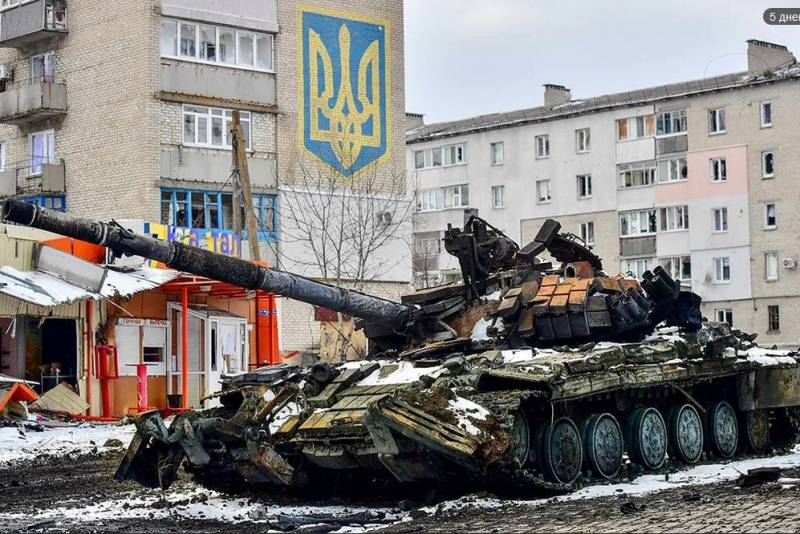 Started the next stage of RIA "News". They were followed by RT, MK, Reedus, KP, AiF and so on. All were noted by the story to their readers, as “scouts told that they constantly find Tanks and other armored vehicles with welded hatches. By the way, we also noted in September, quoting Alexander Khodakovsky from the Vostok battalion.

“According to the battalion commander Khodakovsky, the soldiers got close to the tank and discovered an amazing and terrible picture: all the hatches on the tank were welded. The crew of the combat vehicle was simply walled up, like in a tin can. He was sent to the positions of the Armed Forces of the Russian Federation and the NM of the DPR - certain death, so that the tankers could not even get out and leave the car if the tank was knocked down "
Well, Ukrainians are patient, right? Somehow they were stuffed into the tank, the hatches were closed, they were boiled, and they ... went to fight! Well, or give up so that they are unmurdered.

Funny, of course, if it weren't so sad. 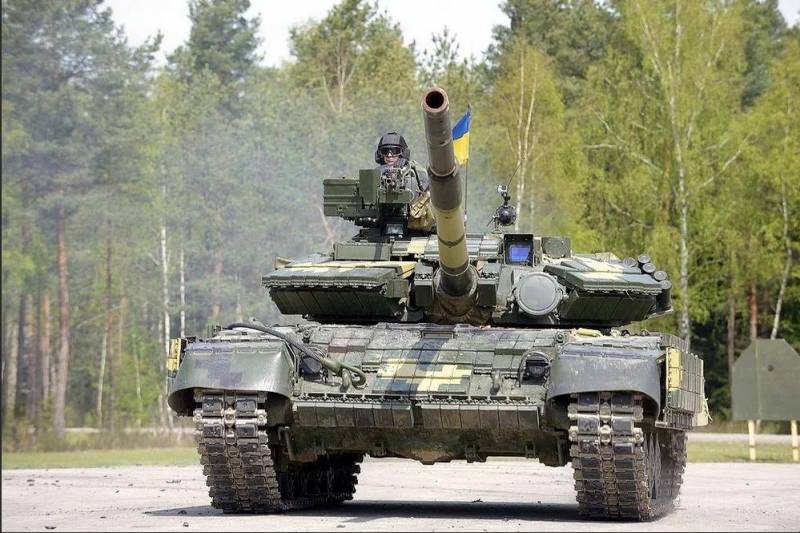 Our tank expert Comrade Lieutenant Colonel Kuznetsov took all this nonsense too seriously. And threw a few thoughts about it.

1. Brewing the hatch as a whole is not as easy as it seems. For this, as it were, an automatic inverter is not enough, after all, armor. And in this regard, simply welding a stud for a remote control is already a difficult task, and if you need to digest a lot of them, then in general it turns out a show for perverts.

And to weld the hatch, even just grab it in several places so that they don’t open it - it will be interesting. In addition, okay, hatches in the towers, but what to do with the "hero's hatch"? Which one is on the bottom? Who and where will brew it? Where can I find such an overpass or a welding maniac who will pull it off from the inside? 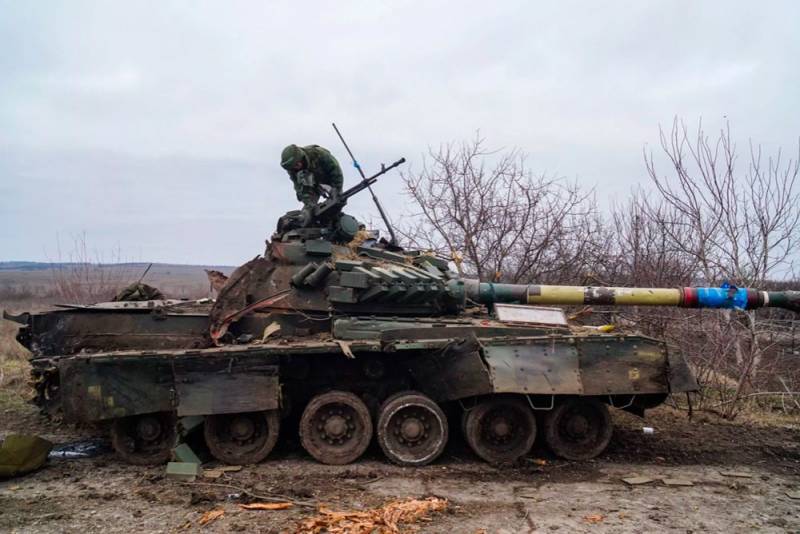 And yes, Alexei believes that even if this happens, the RGD-5 grenade from the tank ammunition will very simply solve the problem of the brewed “hero hatch”. Yes, it will hit the membranes and brains, but the hatch will open outside. The process, of course, is so-so, you need to remove the fragmentation "shirt" of the grenade, insert the UZRGM-2 fuse, which has a long delay, fill up the grenade with everything that is at hand and hide in the corners away. And so you can unlock the "hero's hatch", fortunately, it opens outward.

2. The problem of movement. Even in battle, when it flies over the tank from all sides, the commander's hatch does not close. For two reasons at once. If you seriously think that a tank can be clearly driven with the help of a prism and TKN, then you should not think so. You have to "raise the periscope", that is, stick your head out of the hatch, and then dive back. This is for the commander. Mechanical driver - depending on the model of the tank. The second reason is the desire to survive undermining.

3. Unlock. The tank is, of course, yes, so perfect and almost autonomous, but it still needs to be refueled, maintained and replenished with ammunition. This is in addition to the fact that the crew needs to drink, eat and everything else that rhymes with the word "eat".

A one-time crew - well, this is completely nonsense, a tank is expensive, and turning it into a car for one battle is stupid. But not everyone understands this.

We read how the heroic fighters of the DPR unlocked such a tank with a “Bulgarian” and laughed a lot. Of course, "Bulgarian" - it is in every trench, along with a powerful gas generator. It's easier than ever to pull this off in a modern conflict.

4. Terpily-downs inside the tank. Well, really, it’s interesting to know where such crews come from? They seem to be planted inside the tank at gunpoint, they do not flutter and regularly drive towards the enemy, only to depict something with the gun barrel there. Perfect crew, I must say.

So imagine yourself in the place of such fighters? They take you, put you in a tank, weld up the hatches and order you to blame the enemy and beat him. Here we would, in all seriousness, first take up these miracle welders, since no one canceled machine guns on tanks. And there, at the command of a cannon, you can light it up. And why not, still a suicide bomber, still die in a boiled tank, so why go somewhere? Everything can be done on the spot. 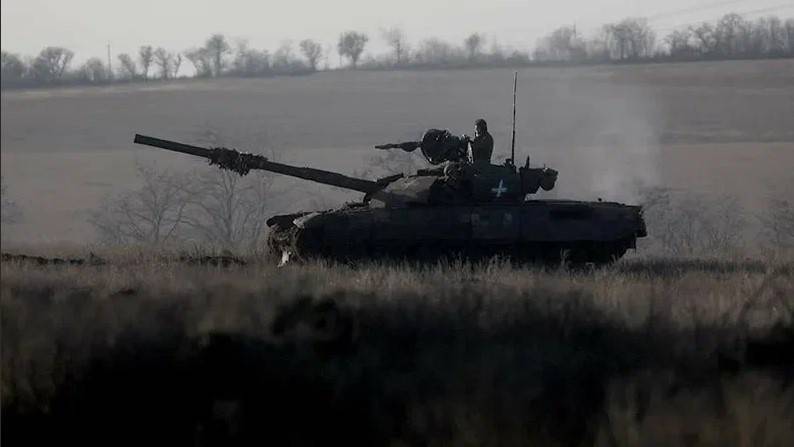 The question arises: in general, what could cause the birth of such tales? It turns out that there may be situations in which the tower hatches are not welded, but blocked. And the crew may have some difficulties with leaving the car. For example, the arrival of a high-explosive fragmentation projectile, when the blast wave simply bends numerous hinge attachments. And the hatch may well turn out to be very well blocked for the crew.

Conversely, the hatch in each tank has a locking device from the inside. It is also spring loaded to make it easier to open.

So yes, the occasion for the birth of a story could have been invented easily and naturally. We even spent some time trying to track down whoever started the welded manhole fake first.

It came out by the will of the 5 TV channel. In its material, the channel gave an interview with a certain veteran of hostilities in the Donbass, a fighter of the LNR militia Gennady Menchenko, who told history, which, according to him, happened in 2014 in Debaltseve.

“I had such a case: a tank was walking - they wanted to shoot it, but it was driving and waving its barrel up and down. Has stopped. I gave the command not to shoot, went up to him with a grenade, looked - and the hatches were sealed, they could not get out. We had to cut the hatch with a grinder, and there were boys 18 years old. They said that they were forcibly, at gunpoint, driven into tanks and sent to fight. It was in Debaltseve in 2014”
Bulgarian to cut the hatch - we will not comment. The fact is that Menchenko also “drew” with a story about “phosphorus mines”.

“The 120th mine flies, burns in the air and gives off a strong smell - like rotten eggs. And when it hits, it explodes, releases gas, and when people swallow this smoke, everything inside them falls apart - the liver, spleen, heart. And people are dying from it."
In general, it is already possible to understand the level of truthfulness of the "expert" and the veteran. Rambo is resting, at least not a single person has yet been able to smell a 120-mm mine flying in the air. burning.

In general, this is how fairy tales are born. Both of Menchenko's stories are tales. Good-natured stories, if they are told in a close circle of friends. But when the same tales suddenly begin to be told by "Russian special forces intelligence officers" - sorry, this is not funny. It is sad.

You begin to understand that there is a madhouse going on with completely incomprehensible tasks. Either the hatches are cut down with a grinder by the militias, or the technicians get immured Ukrainians out of the tank ...

Yes, in the best traditions of the Ukrainian media in 2014-15: the cameras broke, the batteries in the phones ran out and stuff like that. And to show at least one tank from those from which the valiant Russian technicians pulled out the poor Ukrainian suicide bombers, there is no way. Tanks have been fighting somewhere with boiled hatches for a long time, but where is also unknown.

Although it would seem that there is not much video - and RIA Novosti could have made a very impressive report. At least with one T-64 tank that had a hatch welded on. But no, from the point of view of the fighters of the information front, it is enough that the masked fighter told the camera about what he (allegedly) saw.

Actually, the lack of a sane evidence base is one of the main reasons for Russia's defeat in the information war. That is, the world simply does not believe. Perhaps we are not very sad about this, but the world is one thing, and its citizens, who are hung with exceptional noodles on their ears, is another.

Of course, a win is very necessary, especially when there are solid zrada around. And to raise the spirit of the fighters, and the population too. It's really necessary. But here is another question: why take us all for fools, telling fairy tales under the guise of real deeds?

Khodakovsky, who flew in with these hatches, at least said that he was reported about such a thing. Well, you know, verbally, they just took it and told it. And, by the way, Alexander Sergeevich did not raise or discuss this issue anymore. Understood what he said. Why the continuation followed, it is very difficult for us to say.

But in general, it would be worthwhile to understand that smoking tales have no place at all on the pages of the central media and TV channels. At the very least, this is insulting and badly hurts the reputation of both the media themselves in general and the country as a whole. On the same level with the "crucified boy" and other attempts to "lower" the enemy.

Best of all, the enemy is humiliated by defeats in real theaters of war. Although information is also possible, it is better in the aggregate. About the most terrible and effective weapon - this is true.