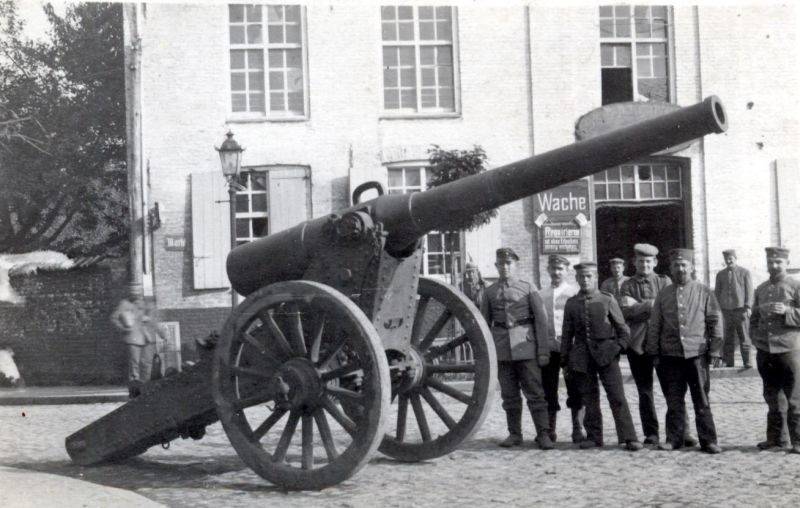 But since we are talking about heavy guns, and above all about those that had a caliber of 155 mm, which is so popular right now, today we will talk about French guns of this caliber. For some reason, no country, except France, had so many of them, and a variety of systems.

At the beginning of the First World War, the French army had high hopes for their famous "75". It was a truly formidable gun, but it soon became apparent that even it could not perform all the tasks required of artillery in trench warfare. In addition, the losses in them exceeded all calculations. For example, in the first 16 months, 2750 guns were lost out of a total of 4800!

This forced the French army to use older or even obsolete guns in a desperate attempt to fill gaps in their calculations and provide troops with much-needed heavy gun fire support. It is for this reason that the 155 mm Mle 1877 cannon remained in service despite its considerable age, as evidenced primarily by its rigid mounting on a Napoleon-style carriage. The absence of a modern recoil braking system meant, among other things, that the gun had to be put back in place after each shot, which significantly reduced its rate of fire. The Mle 1877 could fire a 40 kg projectile to a maximum range of 9,8 km, which was quite acceptable. Well, a Bange-type shutter provided good obturation.

Many barrels were removed from obsolete carriages and installed in a slightly modified version of the Schneider carriage, designed for the 105 mm Mle 1913 TR gun. But since the conversion of Mle 1877 was clearly not fast enough, most of the guns were put into service in the form in which they were originally. As the barrels wore out, they were replaced with new ones, of a simpler design and with an improved shutter. After that, they received the designation 155 mm Mle 1877/1916 and, with a more streamlined projectile, began to have a firing range of about 12,7 km. The guns were taken out of service gradually, as more modern systems were received.

As for the de Bange obturator, it was developed by Charles de Bange in 1872 to solve the problem of gas leakage from the chamber of a cap-loading gun. Note that this design of his was a fairly obvious invention, but for some reason no one except him thought of it. A mushroom-shaped obturator was installed in the shutter, which moved freely in the shutter. Behind him was a donut-shaped cushion of grease-soaked asbestos. When fired, the increase in pressure in the chamber pushed the steel bolt back into the bolt, and it strongly compressed this gasket, which created a gas-tight seal. The de Bange system proved so effective that it is still used today in most cannons using gunpowder charges in caps.

The Mle 155 TR Rimailho 1904mm quick-firing howitzer (TR in the name means "Tir Rapide", or "Rapid Fire" in French, and its second part is the name of the designer, Colonel Rimailho) was supposed to be a very maneuverable large-caliber gun with a high rate of fire , and so it eventually turned out, although the cost of all this was its significant technical complexity. Although the gun itself was a conventional two-wheeled carriage with a short barrel and a hydropneumatic mechanism for dampening the rollback of the barrel. 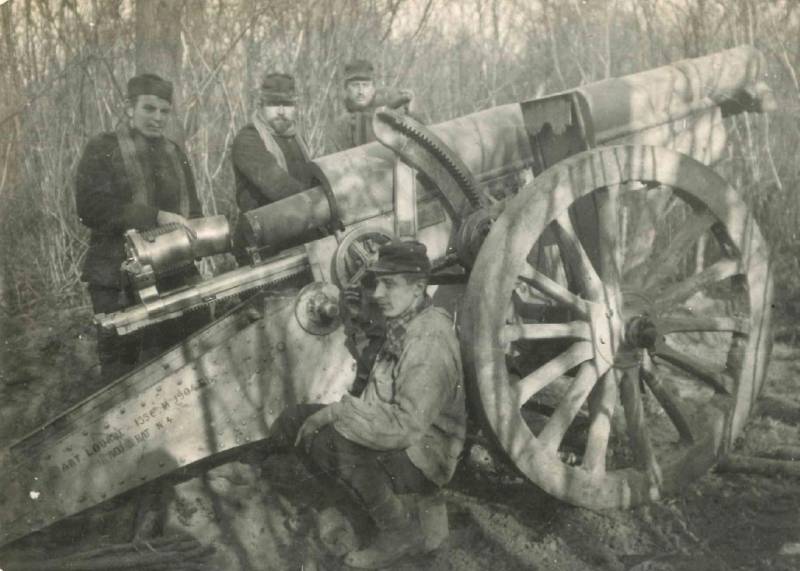 155 mm Mle 1904 Rimailo. The semi-automatic shutter is clearly visible
The gun was semi-automatic, it had automatic opening and semi-automatic closing of the bolt, and, of course, this semi-automatic loading gave the gun a high rate of fire. It was arranged like this: when the barrel rolled back after a shot, the bolt was automatically opened by recoil force, and then held open until the barrel returned to its previous position. Then the trigger lever and the loading tray were pressed, and the bolt rose to the breech of the gun, and the projectile and cartridge were fed into the chamber. Then the shutter was closed and locked, and the gun could fire.

Battery of Rimailo guns firing
A well-trained crew of this weapon could fire 15 grenades weighing 42,9 kg per minute, which by any standard, even today, is impressive. The projectile speed at the muzzle was 320 m/s. Moreover, the Rimailo gun was quite light for its caliber (3,2 tons), and the elevation angle of the barrel was very good: +41°. The only real problem with the M. 1904 gun, besides the complex loading mechanism, was the firing range. The maximum firing range was only about 6000 meters, which was not bad in 1914, as it surpassed all German guns of comparable caliber. But then the firing range of enemy guns began to grow. And it had to be gradually replaced by other, more long-range guns, such as, for example, the 155 mm GPF.

Relying on the versatility of their "75" gun, the French government ignored heavier guns, especially if they were offered by private companies. But it did not prevent them from trading their products with other countries. So, in 1907 the French weapons the manufacturer "Schneider" and the Russian Putilov plant signed an agreement on the licensed production of Schneider guns for the Russian army. The order also included a 152 mm gun with full recoil absorption. In 1910, Schneider redesigned the Russian design into a 150 mm gun, which was also offered to the Spanish army.

Meanwhile, in 1910, the Artillery Technical Committee finally figured out to invite private industry to develop guns together with state arsenals. This decision was made in October 1911.

Shortly before the First World War, the Commission for New Artillery Weapons examined large-caliber howitzers produced for export by FAMH (Saint-Chamond) and Schneider. It was an obvious way to get a new weapon quickly without delays in design and testing. Saint-Chamond offered a 150mm howitzer, which it prototyped for the Mexican army. The Schneider company offered its 152mm howitzer, which it sold to the Russian army.

But it was only after the Battle of Artois in May 1915 that the French high command ordered the rapid acquisition of new howitzers. General Joffre analyzed the artillery support in this battle and concluded that Rimailo's 155 mm howitzer was not suitable for rapid howitzer fire on enemy positions immediately before the attack. The fire had to be compressed in time so that the enemy did not have time to react to determining the point of attack. Therefore, on June 24, 1915, he called for the start of production of new powerful quick-firing howitzers.

Schematic drawing of the howitzer firm "Saint-Chamond". Left side view
Howitzer "Saint-Chamon" used a vertical wedge gate, when opening the breech, the sleeve was automatically ejected. Ammunition was composite - the projectile and cartridge case were loaded as one, but the propellant charge could be changed by removing the projectile from the cartridge case. The cartridge case with the charge plus the projectile was located on the loading tray and inserted into the breech using a sliding pusher. The howitzer had a central hydraulic recoil damper with a pair of cylindrical spring knurlers located on the sides.

Schematic drawing of the howitzer firm "Saint-Chamond". Right side view
The design of the gun shield was interesting, the main role of which was to protect the crew from muzzle flash and shock waves, and not from fragments of enemy shells. The howitzer was transported by a team of 8 or 10 horses as one unit with the barrel pulled back. 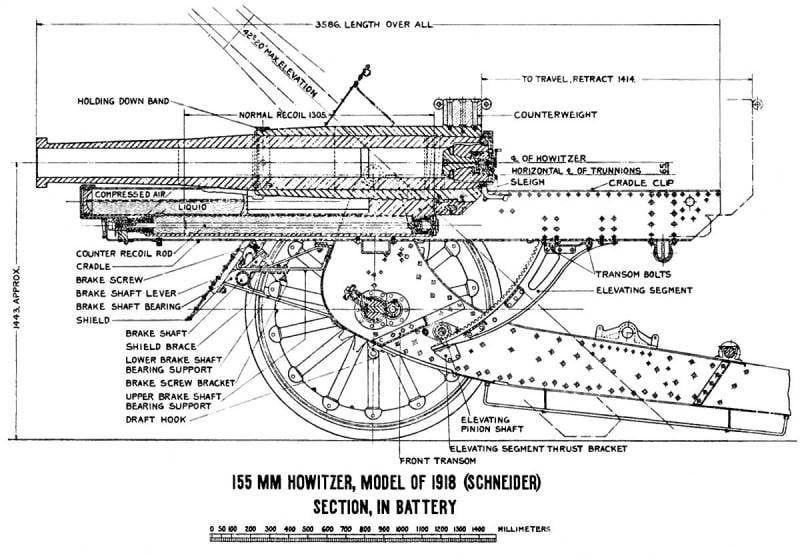 Howitzer "Saint-Chamon" was in service with the French army at the beginning of World War II. The Wehrmacht captured 200 of these howitzers after the fall of France and used them under the designation 15,5 cm sFH 415(f) as coastal defense guns. Finland bought 24 howitzers in 1939, but they arrived too late for the Winter War, although they served in the Continuation War from 1941 to 1945 as the 155 H/15 heavy howitzer. All 24 howitzers survived the Second World War and were in service with the Finnish army until 1962. 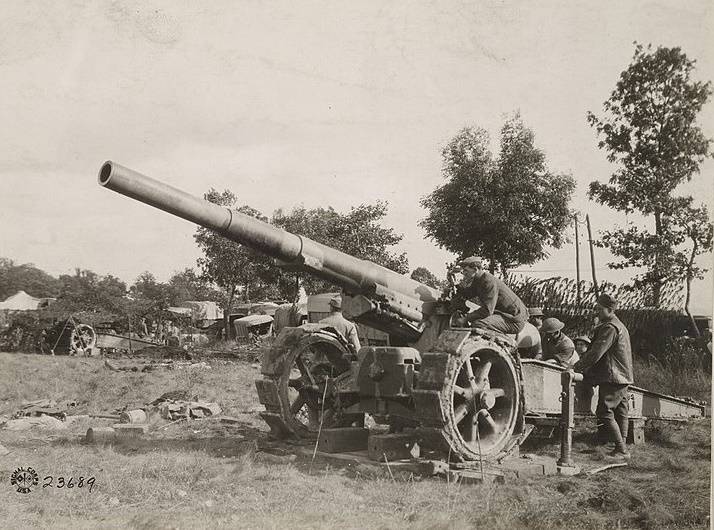 155 mm Canon de 155 GPF gun in combat position
The French in the First World War, one might say, were lucky: they created the FT-17 tank; and in the same way, it was the French who created the best 155-mm cannon - Canon de 155 GPF. It was the brainchild of Lieutenant Colonel of the French artillery L. F. Fillu. Even before the war, he was involved in projects aimed at improving various guns. However, his ideas for a new long-range 155 mm gun were ignored until 1914, since it seemed that there was no need for such a weapon - it was believed that the famous 75 mm Mle 1897 field gun would satisfy all the needs of the French army. 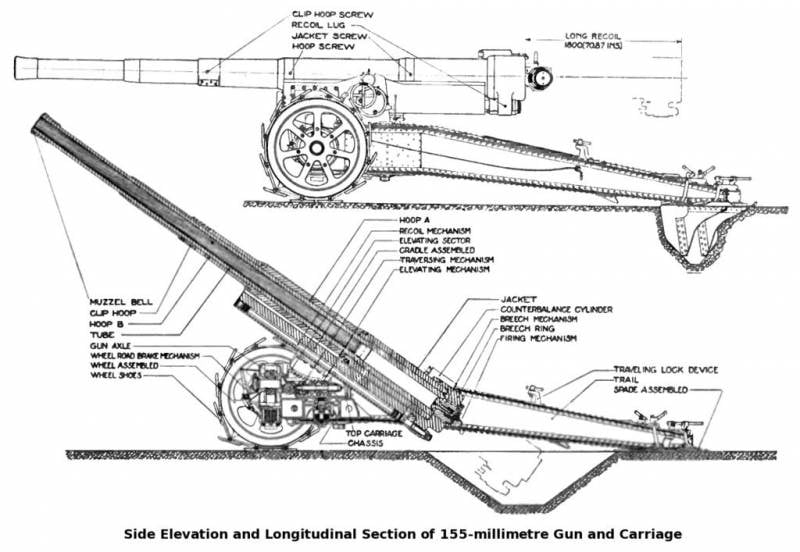 Schematic section of the 155 mm Canon de 155 GPF Fillu gun
The situation changed with the start of the war, however, and by 1916 Fillu was able to re-submit his idea for a new gun. This time the proposal was accepted favorably, as the French army requested a gun with a range of at least 16 m, which could be towed by a car at high speed, and which would have significant horizontal pointing angles, which would provide the gun with a wide effective area .

The new gun, called the Canon de 155 GPF (GPF stands for "Grand Puissance Filloux", "Grand Puissance" can be translated as "Very Powerful" plus the designer's name), used a long, thin barrel mounted on a retractable carriage. It was the first large-caliber gun to use such a gun carriage. In addition, Fillu provided the cannon with a suspension that allowed it to be quickly towed not only on roads, but also over rough terrain. 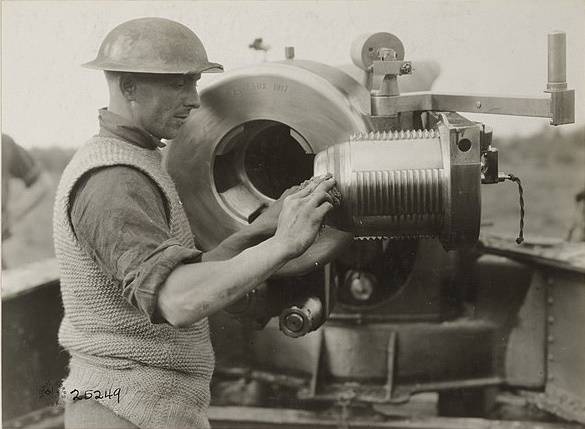 Her piston valve
When installed, the split carriage formed a stable firing platform with a wide angle of rotation (60°) and a maximum elevation of 35°. Piston shutter type "Schneider" was well developed. The gun had a variable barrel recoil length: 1,80 m at 10 °, and at 28 ° and above it was 1,10 m. The huge range allowed one gun to fire an area of ​​​​about 206 square kilometers. In general, the GPF was one of the best artillery models of its time, and for a long time its firing range of 19 m significantly exceeded the initial requirements of 500. 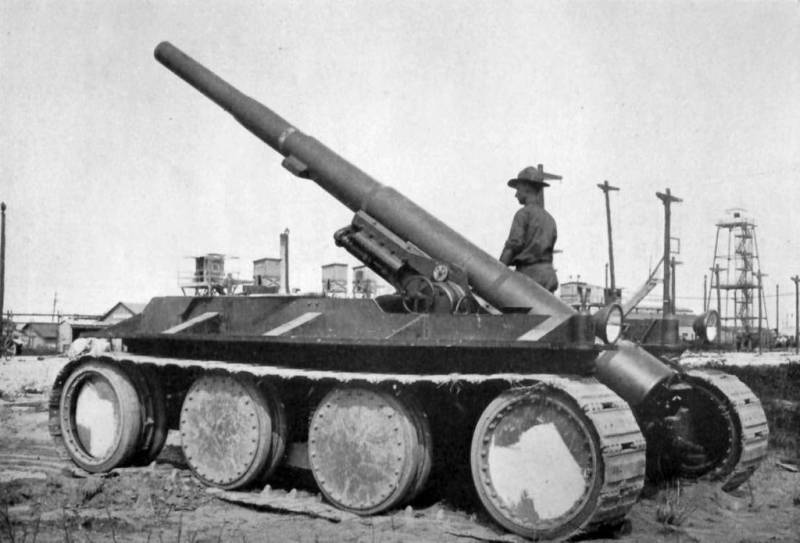 Canon de 155 GPF on chassis tank Christie, 1919
The GPF entered mass production in 1917 and was first used in August of that year in Flanders. When American troops arrived in France, they immediately saw the value of the GPF and placed large orders to equip their own troops with it. Orders were so significant that supplies to the French army were limited, leading to the adoption of the 155 mle 1918 gun. After 1918, the US Army adopted the GPF M1917 and M1918 and began to manufacture its own guns. 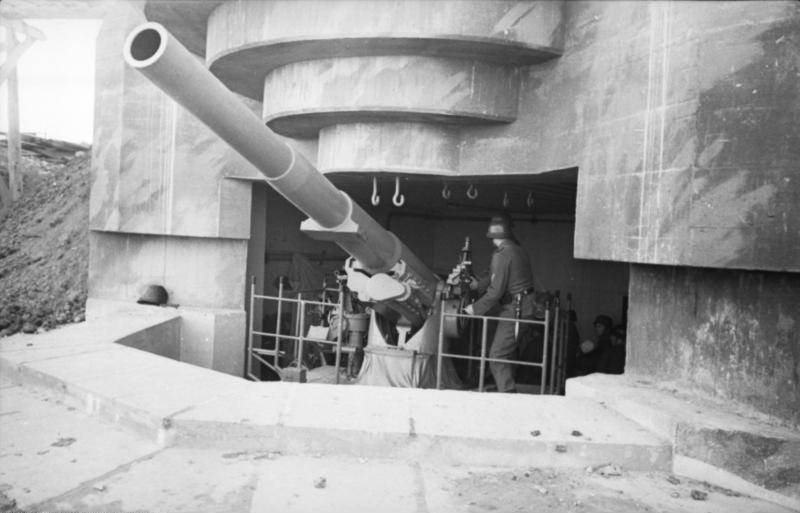 Canon de 155 GPF in the embrasure of a German pillbox on the Atlantic Wall line
When World War II began, the GPF was still one of the best artillery pieces. The French army had about 450 of them. Poland also used this gun. Most of the French GPFs were captured by the Germans, who used them, among other trophies, on the fortifications of the Atlantic Wall. In the United States, the GPF upgrade resulted in the formidable 155mm M1 "Long Tom" cannon, arguably the best heavy gun of World War II. Well, after the war, the French took advantage of their experience in developing the GPF gun and created the 155-mm howitzer Mle 1950, which was used in many countries, including Syria and Israel. 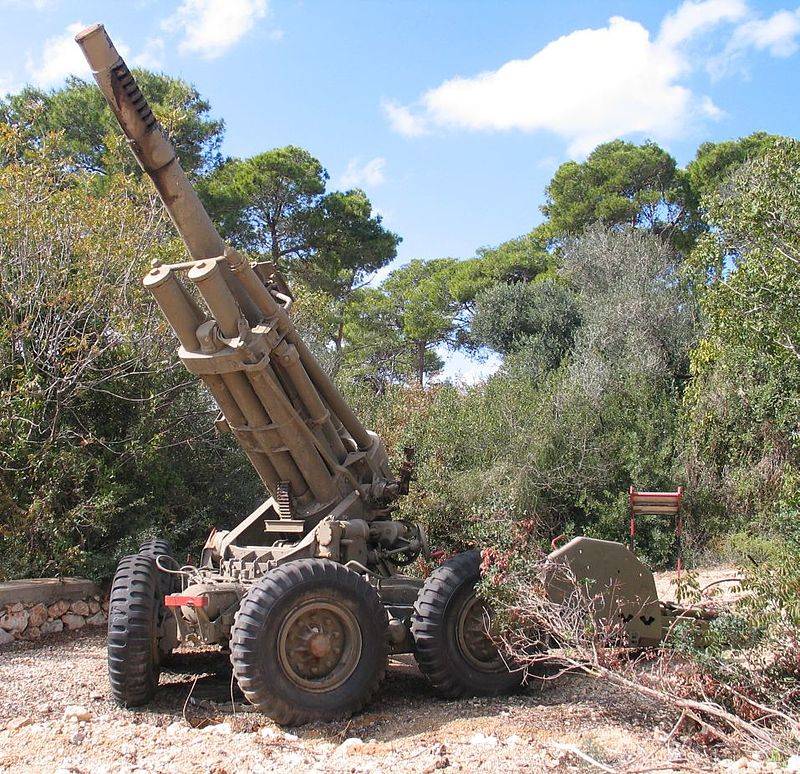