What is happening on “Izhmash.” On the appeal of Mikhail Kalashnikov to Vladimir Putin 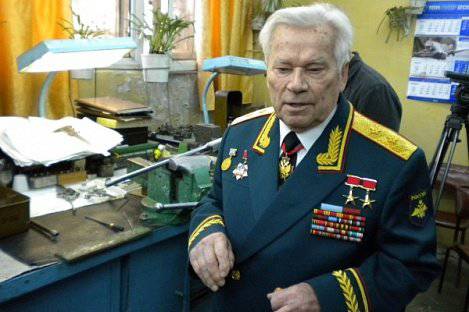 The legendary creator of the AK-47, Mikhail Kalashnikov, and other veterans of the Izhmash plant turned to Vladimir Putin with a request to save the enterprise from inept management actions. Earlier, the media reported about the rally, which was attended by the employees of the plant, dissatisfied with the reduction in wages. How is it that with a colossal increase in defense spending, one of the most important armory production of the country is left overboard? Let's figure it out.


Letter to the president

“At the moment, the production of sports hunting weapons has been completely stopped, and a number of export contracts have been disrupted. A contract for organizing the production of AK automatic machines in one of the countries is close to failure. It is already clear that the not so great state defense order on small arms and aircraft-gun weapons will be failed.

To the limit, the basis of production has been exhausted - the workshop staff The salary of the main workers does not exceed 10 thousand rubles. Many earn even less.

The level of production and volume fell below nowhere. The actions of the administration (interim governor AA Kosov) are often ill-considered and unprofessional in nature and do not take into account the specifics of production.

It is bitter and insulting to see how the Case collapses, which has put and developed more than one generation of engineers and workers. And which was determined primarily by state interests and was accompanied by state support.

On behalf of the veterans who have devoted most of their lives to working at Izhmash, we appeal to you, Vladimir Vladimirovich, to save our factory. Currently, there is still a minimum human potential that has the strength and experience to overcome the crisis. And we, veterans, are able to provide help both in word and deed to the native plant. But in case of failure to take emergency measures, irreversible changes may occur at the enterprise in the near future, leading to its disappearance, as well as the disappearance of such brands as Kalashnikov, Dragunov and Nikonov. Our descendants and true patriots of Russia will not forgive us for this. ”

Probably, everyone who read this message had a wave of indignation in their hearts. It is known that “Izhmash” belongs to the state corporation “Russian Technologies”, and Dmitry Rogozin, Anatoly Serdyukov and Sergey Chemezov personally monitor the implementation of the state defense order. It is also known that the defense expenditures in the country are significantly increased and a natural question arises - is it really impossible to ensure the normal level of earnings of workers at least at key defense enterprises (or better at all)?

So far, the leaders of Izhmash have not commented on the appeal of the veterans to the president. However, the data of the press service of the enterprise indicate a slightly different picture than that described in the complaint to the president. So, since the establishment of NPO Izhmash (beginning of 2011), it was possible not only to pay off debts to employees, but also to raise salaries by 21% (to 14,6 thousand rubles). In 2011, the revenue of Izhmash grew by 40% by expanding markets. The supply to the US market has been increased by 50%. Income from this direction alone was a record for the company 444,2 million rubles. New contracts allowed to increase the load of modern equipment to 70% (at the end of 2010, it was less than 20%). At the end of this year, NPO Izhmash planned to increase revenues 5,5 a thousand times and get 32,3 million rubles of net profit against 6,4 million rubles a loss by the end of last year.

Agree, the data contradict the one described by the veterans. Although the salary in 14 thousand rubles does not inspire us or the employees of Izhmash, but the trends in the Kalashnikov letter do not confirm the statistics of the company.

Problems at Izhmash did not appear today. The arrival of the new team in 2011 was not to the liking of either the employees of the company or the leadership of the republic of Udmurtia. In general, the practice of throwing at defense enterprises of Moscow teams is not new and such a wave has swept, it seems, across all the strategic objects of the industry. The new broom, as we know, sweeps in a new way and, as a rule, no one likes it.

"Why should the Varyag be on Izhmash?" Didn't "Izhmash" for so many years raise its own? Raised. This is an incomprehensible fashion for young people who are able to go to any factory tomorrow, and before that not a single day working in industry to pretend to be a director. How much harm from them, - said the president of Udmurtia. - They sent a new man, he brought with him two dozen, if not more, new people. The salaries were paid for themselves, and people take to the streets with 5-7 thousands. Who won - the plant, the state? Only a handful of people won for whom this is another project, ”said the head of the republic Alexander Volkov a few days ago.

Recall that in October, according to a number of media reports, a spontaneous rally was held at the enterprise. 200 employees of the 103-th workshop, dissatisfied with the received payroll, came to him. At the end of the month, many of them received 5 thousand rubles. History found great resonance in the media and Izhmash was subjected to verification by the State Labor Inspectorate and the prosecutor's office. Violations were identified, but they turned out to be rather insignificant (the labor regulations did not indicate the days of salary issuance, violations in the conduct of record cards for personal protective equipment and personal record cards for washing away and neutralizing means, etc.)

In turn, the leadership of "Izhmash" refuted the fact of the allegedly rally.

“I learned about the rally the day after it allegedly took place,” says Vladimir Labadin, director of the weapons industry of Izhmash. - I had a normal working day, which began with a meeting of leaders. One of the chiefs warned that the staff have questions and need to answer them. After that, we met with representatives of the workshop, all settled and continued to work. Where did the information about the rally come from? No one can understand.

Even the number of participants was not correct. Initially it was reported that rally 200 people. In fact, questions arose from the brigade in 28 people. And this is one production site of their countless. Employees had questions on salary, on organizational issues, production environment. This is a normal daily practice. All discussed, all settled.

From our side, we add that we could not find in the network any documentary evidence of the rally.
The situation with the salary of the staff clarified in the press service of "Izhmash":

“In September, 2012, the workers of one of the sections of the 103 workshop, where problems with product quality and labor productivity were identified, fulfilled the planned task only at 40% and received wages less than usual. To date, there has been a positive trend in the implementation of production tasks in this area. The unit is provided with materials and components for the implementation of planned targets in full.

It turns out that someone is lying - either the leadership of "Izhmash" or Udmurtia.

In the entire history of “Izhmash”, the dissatisfaction of the leadership of the republic with the new managers of the enterprise is clearly traced.

“The steps that the Izhmash management has taken led to such things when people began to receive five to six thousand instead of 15. And, of course, it is very disturbing that what will happen next and with the new enterprise NPO "Izhmash", because the inventory that the plant has accumulated over the past periods of time, successfully sold, according to the state defense order - today we see that all the state defense orders practically disrupted, ”- said in a recent report by the Deputy Chairman of the Government of Udmurtia Ildar Bikbulatov.

It should be noted that there is a widespread opinion among residents of Izhevsk that the head of Udmurtia, A. Volkov, speaking out against the “Varangians” has his own selfish interest in the development of an information attack on Izhmash. According to this popular version, he is trying to “push through” his people, including his son, now occupying the position of the General Director of Udmurttorf OJSC, Andrey Volkov, to the leadership of the growing enterprise.

In this case, the veterans, most likely, used “blindly,” playing on their feelings for their native enterprise, to which they gave their best years of life. It sounds ugly, but the technique is very common in the political struggle.

On the other hand, the “Varangians” themselves could have run into such a reaction from employees and management, playing with economic indicators and forgetting about ordinary people. This situation is also not something new for our defense industry. Particularly hurt the people of the old school that the newly minted managers get significantly higher experienced workers.

Summing up, let's say that so far there is no absolute confidence in the correctness of any of the parties, even despite the unconditional authority of the veterans who signed the letter. In any case, perhaps it was not written in vain.

The attention of the Kremlin to the conflict, we hope, will put an end to it. The conflict clearly does not benefit either the country or the factory workers.

Ctrl Enter
Noticed a mistake Highlight text and press. Ctrl + Enter
We are
List of destroyed the largest and most high-tech enterprisesBusted "Izhmash" will save at the expense of "Izhmeha" and "Hammer"
109 comments
Information
Dear reader, to leave comments on the publication, you must to register.