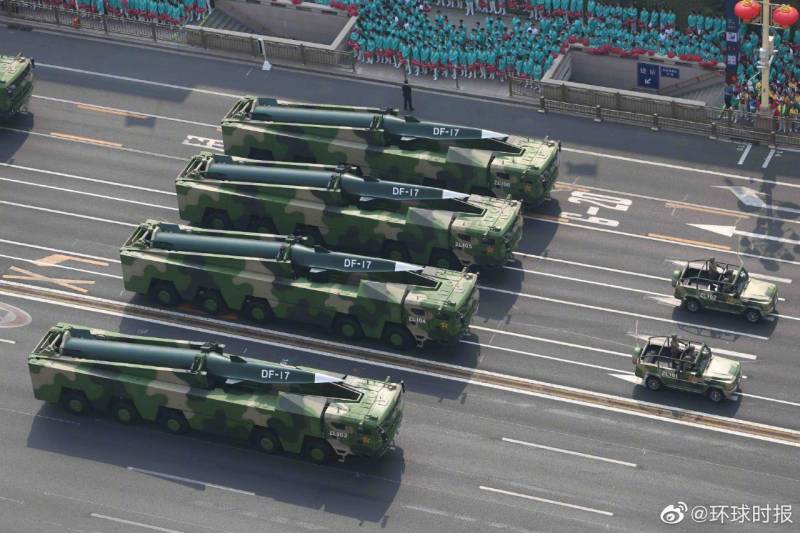 Recently, the Pentagon released a regular report "Military and Security Developments Involving The People's Republic of China", dedicated to the current state and prospects for the development of China's defense potential. A certain place in this report is occupied by Chinese developments in the field of hypersonic technologies, incl. ready-made missile systems that have already been put into service. Such systems naturally attract attention and cause concern.

According to American data

In general, the Pentagon report confirms that by now the Chinese industry has been able to create a full-fledged strategic hypersonic missile system and bring it into service. In addition, work is underway on new systems of this kind that can be brought to operation in the future.

Thus, the current situation is mentioned in the summary of the report, in the chapter "Understanding China's Strategy" and its section "Capabilities for Counter-intervention and Power Projection".

It is reported that in 2020, a missile system consisting of a medium-range missile and a DF-17 hypersonic warhead entered service with the PLA. With the help of such a complex, they are going to strike at targets of a potential enemy in the western part of the Pacific region. Depending on the task, the warhead can carry a special or conventional warhead.

Technique and calculations. Photo Telegram / Vatfor
Based on the available data, the authors of the report are trying to determine the place of hypersonic systems in the PLA weapons system and the impact of such products on its development. So, according to some sources, the new complex with the DF-17 block is gradually replacing obsolete short-range missiles in parts. Such an upgrade of the material part should have a positive effect on the combat capability and overall potential of the strategic missile forces.

The US report mentions China's new hypersonic projects several times. They are created on the basis of accumulated experience and available developments, but at the same time new solutions for Chinese technology are being introduced.

On July 27, 2021, the first launch of the complex using the principle of the so-called. partial orbital bombardment. In this case, the warhead with the help of a launch vehicle is launched into the Earth's orbit, along which it moves to the target area. At a given point, the orbit is deorbited, and the block falls on the intended target.

According to foreign data, during last year's test, the Chinese "partial-orbital" hypersonic unit flew more than 40 thousand km. The flight duration exceeded 100 minutes. At the moment, this is the highest performance achieved by Chinese hypersonic technology. 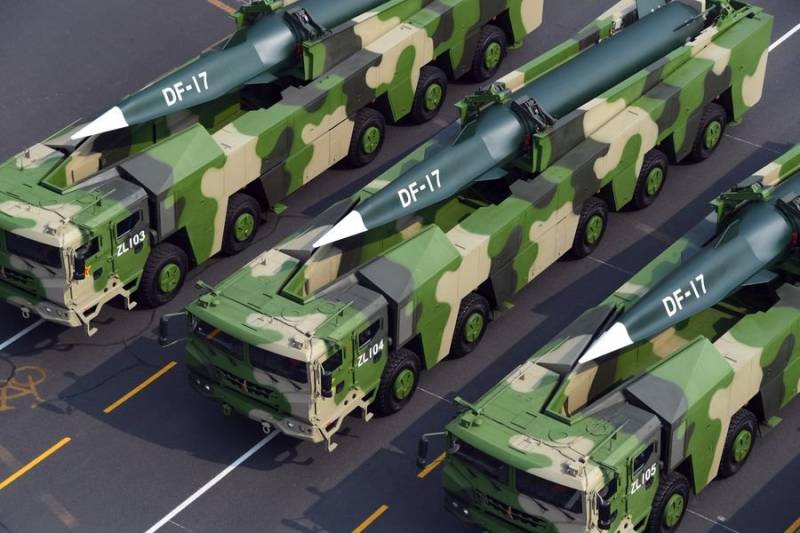 The DF-17 missile has a distinctive appearance. Photo Nevskii-bastion.ru
In parallel, a hypersonic system for a different purpose is being developed and tested. In 2021 and 2022 test launches of a reusable aircraft capable of suborbital flight at hypersonic speeds took place. It is assumed that the goal of such a project is to create a transport system with the highest speed of cargo transfer. An aircraft-type aircraft capable of operating from conventional airfields is being developed.

Curious if odd points are made in the PRC Views on Strategic Stability chapter and its Challenges to China's pursuit of strategic stability section.

The authors of the report believe that Beijing is afraid of the hypersonic weapons of the United States and its allies. American and foreign successes in this area threaten China's relatively few strategic forces on the ground. In addition, with reference to Chinese experts, it is argued that the spread of hypersonic technologies could blur the line between conventional and nuclear conflicts. So, an enemy attack using hypersonic systems can be answered with a full-fledged nuclear strike.

It is noteworthy that the Pentagon report does not indicate which US hypersonic weapons threaten China's defense potential. The reason for this is quite simple: with all the successes at the stage of research and full-scale experiments, the United States does not yet have combat-ready hypersonic missile systems, and their development is facing noticeable difficulties.

From various sources, incl. and from the latest Pentagon report, it is known that China has been developing several types of hypersonic missile technology in recent years, incl. weapons for the army. At the same time, only one such complex, known under the index DF-17, has come into operation to date. However, this complex alone can significantly influence the strategic situation in the region. 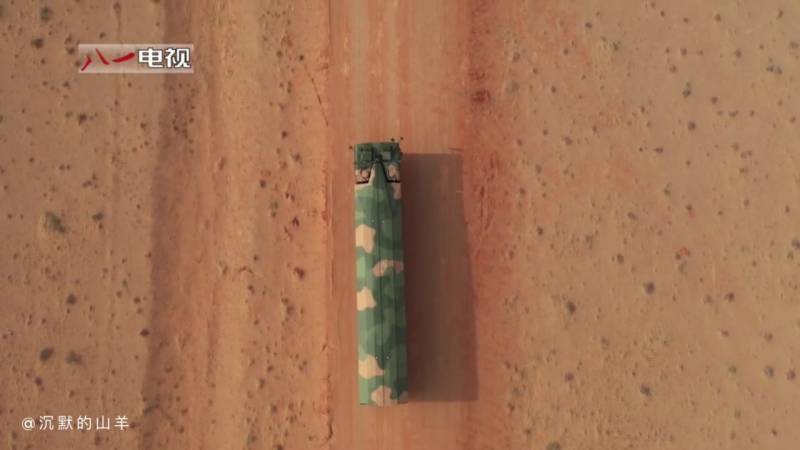 DF-17 on combat patrol. Frame from CCTV report
The DF-17 complex and the DF-ZF hypersonic warhead have been created for it at least since the beginning of the 2019s. In the middle of the decade, tests of individual components, as well as the complex as a whole, started. In XNUMX, the system was adopted by the PLA missile forces and was soon shown at one of the open events.

DF-17 is a mobile ground missile system on a special five-axle chassis. A self-propelled combat vehicle carries an elevating launcher for one missile with special combat equipment. Such a complex can move along roads and terrain, performing patrols and reaching predetermined launch positions.

The installation carries a special ammunition, presumably made using off-the-shelf components. The DF-17 missile includes a single solid propellant stage for initial acceleration and climb to the required altitude, and also carries a warhead known as the DF-ZF or WU-14. The total length of the rocket does not exceed 11-12 m with a launch weight of about 15 tons.

The DF-ZF warhead is a distinctively designed aircraft with a flat bottom, tapered fuselage and vestigial wing. There is no own propulsion system - the flight is carried out due to acceleration by the launch vehicle. The exact flight speed is unknown, but should exceed 5 M. The range is estimated at 2-2,5 thousand km. The block is capable of active maneuvering and has an autopilot with a navigation system. It is possible to install a conventional or nuclear warhead.

The DF-17 complex has all the characteristic advantages of a hypersonic weapons. The warhead on the trajectory is almost impossible to intercept, and its hit inflicts great damage due to the warhead and kinetic energy. In addition, Chinese complexes are made mobile, which improves their operational capabilities. 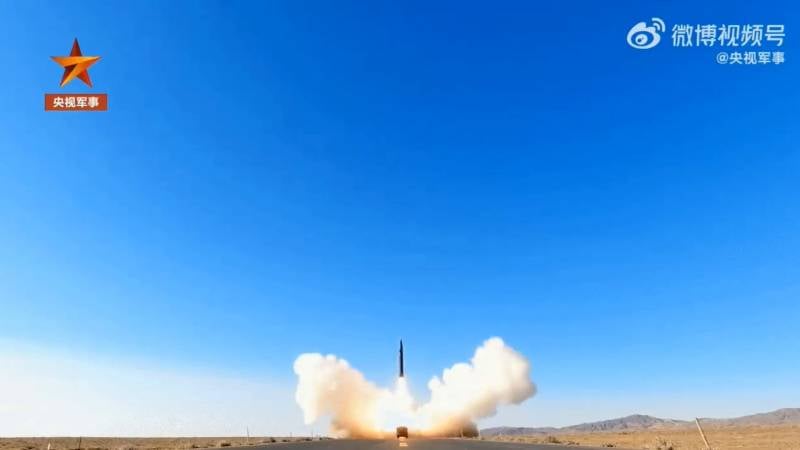 Rocket launch. Frame from CCTV report
Being in China, the DF-17 complexes can control the western Pacific region, including the so-called. island chains. In addition, a potential threat is being created for the facilities of the United States and its allies in the region. As a result, the DF-17 is a convenient strategic deterrent.

The Pentagon rightly believes that the Chinese industry plans to develop existing technologies and create new missile systems. Obviously, the main difference between the next systems of this class will be an increased flight range. In the medium term, the emergence of full-fledged intercontinental complexes is possible.

The very fact of the existence and annual publication of the reports "Military and Security Developments Involving The People's Republic of China" clearly shows that the Pentagon is watching China's military potential. The American side is monitoring various processes, and in recent years, the Chinese hypersonic program has become one of the priority topics.

So far, China has only one hypersonic system in service, and the number of such equipment is probably small. In this regard, the authors of the report are not inclined to consider it as one of the central topics. However, in the future this direction will develop, which will lead to the emergence of new systems and the expansion of their combat capabilities. And it is likely that in the coming years, the authors of the reports will pay more and more attention to such weapons.