November 1, 2012
72
In 2000, when wide aviation The public was shown the new MiG 1.44 MFI fighter (multipurpose front-line fighter), which was an experimental Russian prototype of the 5th generation fighter, many aviation experts noted that the layout of the car is somewhat reminiscent of the serial American F-16 fighter. At that time, only a few aviation specialists representing the older generation noted that this is not entirely true. The new Russian fighter really resembles the F-16, but at the same time, the American fighter repeats the external features of the experienced Mikoyan E-8 fighter, which was born almost 15 years earlier than the F-16. The experimental E-8 fighter was a plane back in the 60s, which was many years ahead of its time.

The experienced E-8 interceptor was developed as a deep modernization of the MiG-21PF serial fighter, but it had so many new design features that it was decided to assign the future MiG-1960 index at the initial design stage. It was originally planned that the new fighter will replace the production of the MiG-23P and will be a massive aircraft. The creation of the new machine was carried out in accordance with the decision of the commission of the military-industrial complex from 21 in May 30 on the development of the MiG-1960 interceptor fighter. This aircraft was a development of the MiG-23PF, equipped with a new C-21 armament system, developed on the basis of the Sapphire-23 radar, the Spektr infrared direction finder, and two K-1 long-range missiles. The new E-23 fighter was intended to destroy air targets in both the front and rear hemispheres at any time of the day in simple and complex weather conditions. 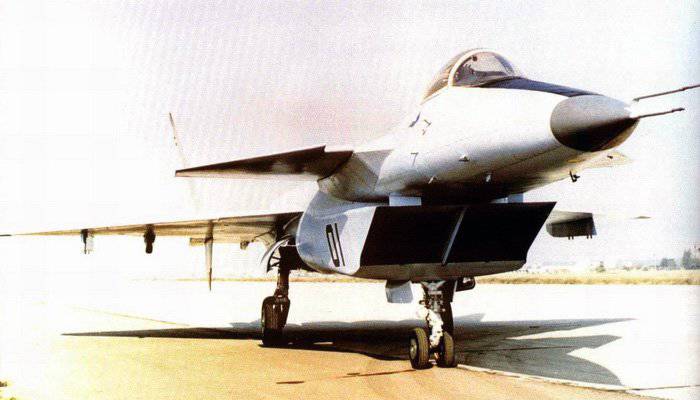 MiG 1.44 MFI
The main problem in upgrading the aircraft was that the diameter of the Sapphire radar antenna in its original version significantly exceeded the diameter of the CD-30T radar antenna, which is why it was impossible to place it in the nose-cone of the serial MiG-21 fighter. This fact led to a redesign not only of the forward fuselage, but of the entire fighter as a whole. From the base model, with the exception of the tail, the wing and the main landing gear (and then not in full), almost nothing has survived. Moreover, the increased take-off weight of the new aircraft required the installation of a more powerful engine than the R-11F-300 engine, the new aircraft needed a propulsion unit with at least XG more than its predecessor 800-1000. In this case, the new engine should have the dimensions of the previous one, in order to calmly take its place.

An interesting fact is that the new engine was created not by the “native” OKB-300 S. K. Tumansky, but by the design bureau at the serial plant headed by N. G. Metskhvarishvili. At the same time, the designers applied the method of small increments of the basic parameters of the aircraft engine basic model: they slightly increased the diameter of the compressor flow and rotational speed, increased the compression ratio, changed the profile of the blades, used new heat-resistant alloys for the manufacture of turbine blades. The new engine was designated P-21F-300 (its simplified name P-21-300 is also quite common). This engine had the same systems as the P-11F-300, including the de-icing system of the inlet part, oxygen feed for the starting igniters (it allowed to increase the height of the launch). However, its weight and dimensions have changed slightly. 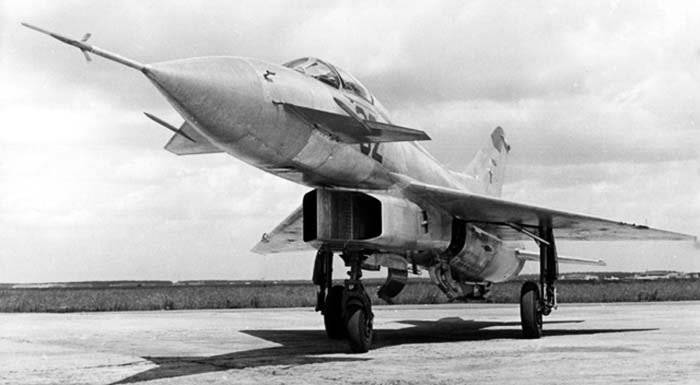 Experimental fighter E-8
The new engine successfully passed the bench tests: all the characteristics required by the project were obtained already on the 3-th copy of the aircraft engine. The creators managed to increase its thrust at maximum operating mode from 3950 to 4700 kgf, and in the afterburner mode from 6175 to 7200 kgf. Due to this, with the take-off weight of the E-8 6800 kg fighter, its thrust-to-weight ratio could exceed one.

Among the main aerodynamic features of the experimental E-8, three of the most significant could be identified. The first is an unusual type of air intake. The second is the ventral ridge that folds during the release of the chassis, which was later used on the MiG-23 serial fighter. The third is the presence of the front horizontal tail (PGO or "destabilizers") with a span of 2,6 meters, while the PGO did not have a control mechanism. At subsonic flight speeds of the fighter, the front horizontal tail was in a free weather vane mode, and at supersonic flight speeds at M> 1,5, it was fixed parallel to the building horizontal of the fighter, which made it possible to shift the focus of the machine forward, compensating for its displacement back when the speed of sound passed. This solution made it possible to increase the lift coefficient by more than 2 times at speeds that corresponded to or exceeded M = 1,5, and 2 times - at speeds equal to M = 2,0. At a speed of Mach 2 at an altitude of 15 km, the maximum permissible overload should have increased from 2,5 to 5,1, which was evidence of an improvement in the maneuverability of the vehicle.

Another novelty of the E-8 fighter was that all the fuel tanks in the fuselage were no longer rubber (supplementary) tanks, as on all existing serial modifications of the MiG-21. New tanks were included in the design of the aircraft and later became widespread on all fighters of the OKB MiG without exception. A total of experimental fighter E-8 could take in their tanks - 5 fuselage compartment tanks, as well as 4 wing tanks - 3200 liters of fuel. In addition, the E-8 fighter system was created to blow the boundary layer from the flaps during landing. 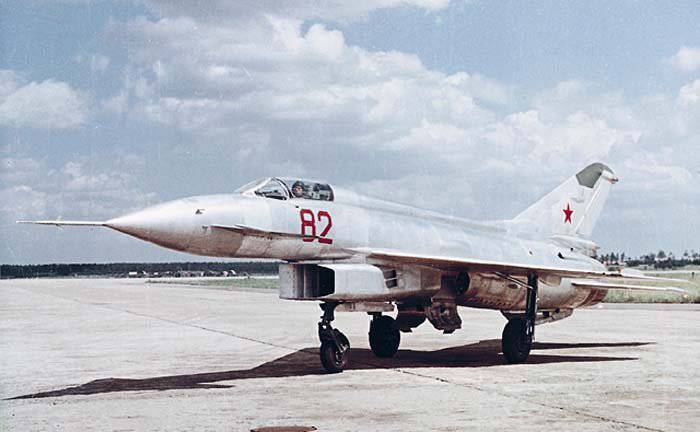 Also on the fighter was installed the rescue system "SC", created in the Design Bureau A. I. Mikoyan. But, while on the first serial fighters of the MiG-21 in the process of ejection, the seat from the cockpit was carried out in such a way that the pilot defended the oncoming airflow with the cockpit lantern, then the E-8 didn’t protect the pilot (he folded to the side and dropped separately) . For this reason, the ejection was limited to speed in 800 km / h.

The main differences of the E-8 fighter from the MiG-21PF:

- New power plant based on the P-21F-300 with an all-mode double nozzle;
- new head and tail fuselage, aircraft fuel tanks (for the first time in OKB practice) were part of the fuselage design;
- the presence of a flat ventral air intake with an adjustable vertical wedge;
- tail and wing with a serial fighter MiG-21PF with modifications to the new fuselage and docking with it;
- visor type flashlight with opening to the side, mounted SK-3 seat, the pilot rescue system is implemented without cockpit protection;
- Front horizontal tail assembly (destabilizer) is installed, horizontal tail assembly is lowered to 150 mm;
- one brake flap below;
- rejectable ventral crest;
- on the pylon under the fuselage 1 PTB with 600 capacity could be installed.

By September 1961, the new E-8 fighter project was completely ready, but the creators of the C-23 complex failed to pass on time either missiles or radars for testing, so the E-8 decided to temporarily install the conventional CS-30TP weapons system, two serial K-13 rockets and Gem infrared reamer. Cannon armament on the experimental fighter was not provided. At the same time, the fighter began to be designated as MiG-21M. In total, two flight copies of the vehicle were assembled: in January X-NUMX of the year E-1962 / 8 was ready, and in May of the same year - E-1 / 8. 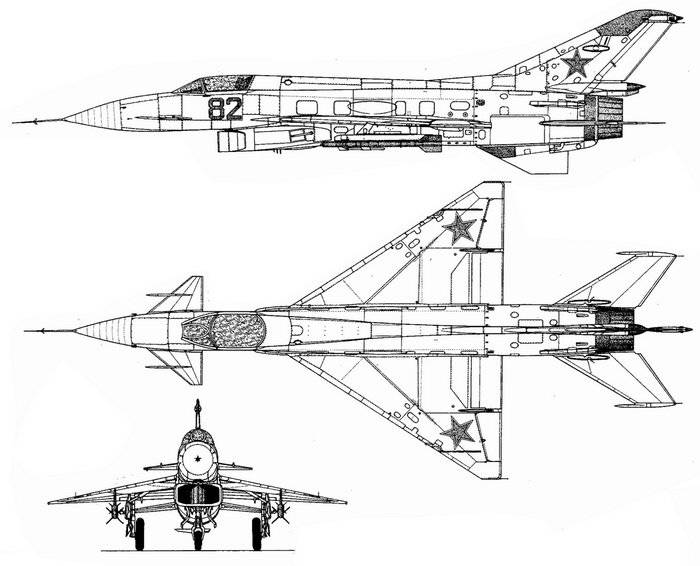 On both prototypes instead of the radar were mounted their weight-and-weight models and KZA. The first flight of the E-8 / 1 fighter took place on 17 on April 1962 of the year, the plane took off in the air G.K. Mosolov, test pilot of the OKB-155. In this and subsequent test flights, in addition to determining the characteristics of controllability and stability of the fighter, the removal of altitude and speed indicators, the CGM mechanism was worked out, the air intake control algorithms were refined, and other tasks were solved. In general, the new machine was encouraging creators. At the same time, all spoiled the unreliability of the new power plant. Almost every flight recorded overheating, surging, etc. At least 6 once the engine of the fighter spontaneously stopped.

11 September 1962 of the year during the 40 flight, the E-8 / 1 fighter crashed and crashed 60 km southeast of LII. The fighter engine collapsed at a height of 10 000 meters at a speed that corresponded to M = 1,7. Inspection of the wreckage of the crashed car showed that the cause of the disaster was the destruction of the 6-th stage of the compressor. A piece of this stage broke through the body of the aircraft engine and damaged the fuel tank and both hydraulic systems, which led to loss of control of the machine and fire. After that, a fragment hit the right aileron, destroying it and launching the plane into a spiral fall. Test pilot Mosolov was able to eject from an inverted fighter at an altitude of about 8 kilometers, damaging his leg and arm. At the time of landing, he was even more traumatized. The pilot was found only 2,5 hours after the accident and was hospitalized in serious condition. The doctors could hardly save the test pilot's life. 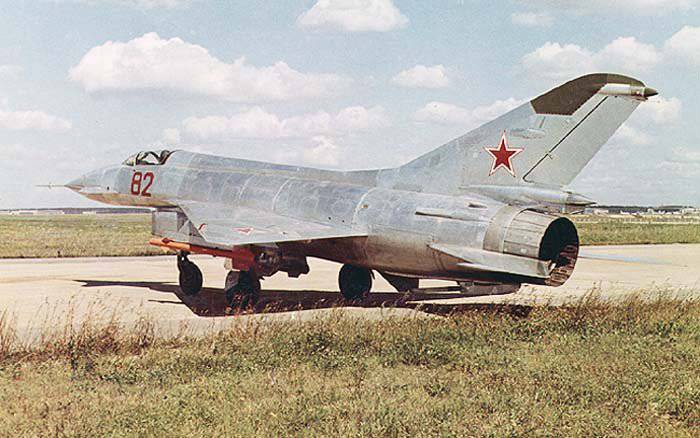 29 July 1962 for the first time flew into the air E-8 / 2, which was piloted by A. V. Fedotov. By September 4 on this fighter 13 test flights were carried out to remove the flight characteristics from the suspension of the K-13 missile models, to work out the power plant, to study the destabilization of the shaking. On the plane, a practical ceiling was reached in 19 650 meters, as well as a maximum speed of 2050 km / h at an altitude of 15 000 meters. However, after the loss of the first instance of the fighter, flights to the E-8 / 2 were discontinued. After some time, due to the lack of reliability of the propulsion system, as well as due to the fact that the mirror of the new Sapphire radar could be significantly reduced and the MiG-21 fighter jet was inserted into the cone, the project was closed. For a long time after that, the E-8 / 2 fighter stood idle at the OKB flight station in Zhukovsky, after which it was used to conduct ground testing of a number of elements of the future MiG-23 fighter.

The new fighter could have been brought to the required level of reliability, but at that point in time the design bureau was already in full swing working on the design of an entirely new fighter MiG-23, which was equipped with a variable sweep wing. At the same time, actually at the very beginning of the 1960-s, the new E-8 fighter could become a maneuverable air combat vehicle, similar to the modern F-16 and MiG-29 fighters.

Performance characteristics of the E-8: