How to parade: technology on the march

18 May 2010
0
9 May 2010 of the year on the Red Square in Moscow, as usual, passed the military. Celebrating the anniversary of the victory of the Soviet Union in the Great Patriotic War, representatives of all military branches took part in the parade. Special attention of the public, of course, was attracted by the equipment, from the well-earned T-34s to the latest rocket complexes.

Honored veterans were the first to appear on the square. Among them were the famous front-cars GAZ-67B and Willys-MB ("Wilis"). By the way, it was according to the Willis’s drawings that the GPW SUVs were assembled on Ford’s conveyors, the name of which became a household name - just a “jeep”.

In addition, the legendary "old men" in the parade involved self-propelled artillery SU-100 and medium Tanks T-34-85. Such self-propelled guns, "tank killers", appeared only at the very end of the war, as a response to the emergence of new German heavy tanks, and were made on the basis of the same T-34-85 (72% of the details of the SU-100 were borrowed from the T-34-85 ) 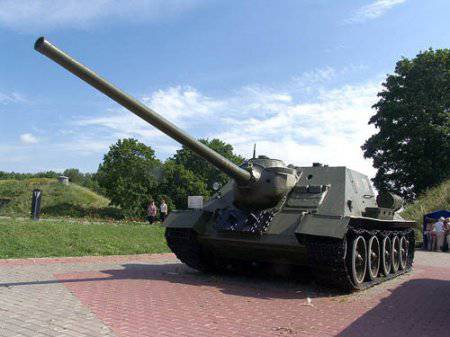 After the war, these rather successful cars were modernized more than once and remained in service for more than a decade. Their impressive barrel and weighted 100-millimeter shells made it possible to effectively deal with the increased armor protection of new tanks. They were among the shortcomings: the number of shots in the ammunition had to be reduced, and the rate of fire decreased. And the trunk exit was so large that it made it difficult to maneuver on rough terrain. Su-100 could easily bump it into the ground.

But the T-34-85 was never officially decommissioned by the Soviet army: it was “retired” only in 1993, although, of course, in reality such tanks began to be replaced with new ones in the middle of the 1950's. This version of the famous medium tank from 1944 was produced and was also created as a response to the appearance on the front of very dangerous enemies, the German Tigers (Panzerkampfwagen VI) and Panthers (Panzerkampfwagen V). The X-NUMX-mm T-76-34 gun didn’t take the powerful armor of these rivals, which forced the designers to move on to the 76-mm caliber gun.

In addition to the new T-34-85 cannon, the upgraded tank had a more spacious turret, which now housed three of the four crew members - including the shooter, who allowed the commander to be freed from this role, who could now fully concentrate on his main duties fight This tower was cast, with enhanced armor; Many experts believe that it was in the T-34-85 modification that these tanks reached the perfect balance of firepower, security and maneuverability.

Next to the Red Square came the modern military equipment of the Russian army. Interestingly, not all of it is made in Russia. For example, Dozor-B light armored personnel carrier is a product of Kharkov Mechanical Engineering Design Bureau from fraternal Ukraine. This 6,3 tonnage reconnaissance and patrol vehicle has already been developed in the 2000s and, of course, taking into account the requirements of modern wars. The body of armor steel and armor glass complements enhanced bottom protection that protects against detonation. The 12,7-mm anti-aircraft machine gun mounted on the roof is controlled remotely and rotates horizontally by all 360 degrees. 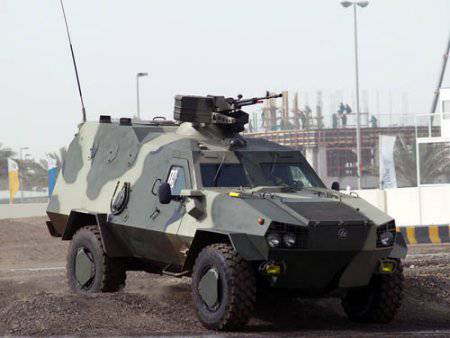 Another modern army vehicle shown at the parade is also almost a novelty developed by the 2005 of the GAZ-2975 Tiger, or, as journalists called it, the Russian Hummer. Indeed, in terms of a number of characteristics, the Tiger is at least not inferior to the American Hammers, even though it costs almost half as much. This SUV is able to climb the slope up to 45 degrees and roll on a slope up to 30 degrees. Regulation of pressure in the tires allows you to move even through impassable dirt. It is interesting that initially the "Tigers" were developed on the order of the military department of the United Arab Emirates, which paid for the design work so that these vehicles would later enter into service with the UAE army. The contract was never signed, but GAZ’s cars, which were ready for production, remained - and, it seems, were enjoyed by the Russian military. 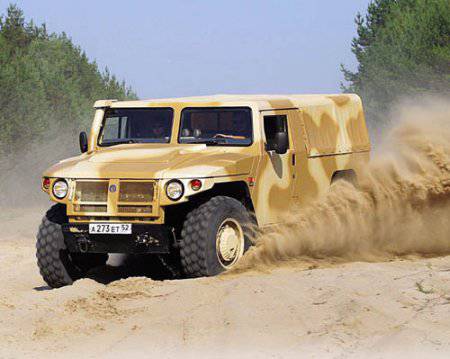 But the UAE bought several hundred samples of the BMP-3, which also participated in this year’s Victory Parade. This battle-proven machine has no class rivals in terms of armament. 30- and 100-mm semi-automatic cannons (capable of firing even anti-tank guided missiles) are installed on it, there are also twin machine guns. 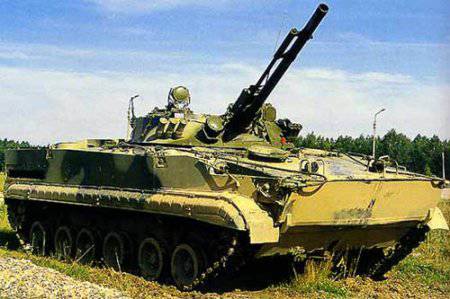 Another repeatedly tested example of modern technology that was shown in the parade is the BTR-80. Although with the 2008, the Russian army began the transition to the new BTR-90, these vehicles from the second half of the 1980's remain the main armored personnel carriers of our armed forces. Their latest versions, with enhanced weapons, may well be called not BTRs, but fully-fledged infantry fighting vehicles, just not with a track, but with a wheelbase. For example, on the BTR-82 instead of the 14,5-mm large-caliber machine gun can be installed and 30-mm rapid-fire gun. 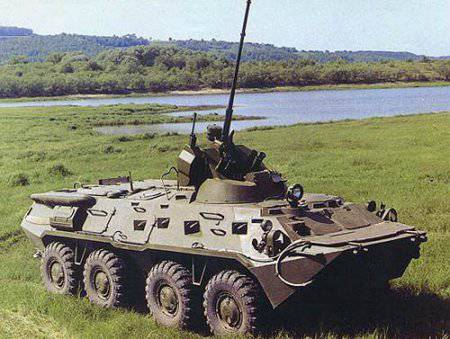 The vehicles that came out to the parade gradually became “heavy”: the T-90A tanks, the modified main battle tank of the Russian army, rolled out. Unfortunately, the transition to this modern machine is somehow very delayed: officially it is in service with 1992, all the various modifications of the T-90 we have a little more than 400 pieces, while those created in the 1970-T-72 - almost 10 thousand. A pity - this tank, in general, is not inferior to the most modern competitors. Its unique advantages include extremely high throughput and reliability, as well as - traditionally - low cost. Today, experts consider this tank transitional to the next, already the fourth, generation of tanks. The corresponding project T-95 is already being developed for a decent amount of time in the Uralvagonzavod design bureau. Earlier, officials repeatedly promised to start producing a “radically new” T-95 in 2010, then they limited themselves to promises to show it at the traditional arms exhibition in Nizhny Tagil. It remains to wait for the exhibition. 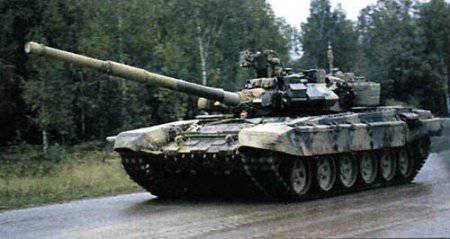 A fundamentally new machine is being created on the basis of the next participant in the parade, the ACS Msta-S. However, this has already been written ("Self-propelled shotgun"). By itself, “Msta-S”, which was put into service in 1989, has not become outdated yet. “C” in its name means “self-propelled” - in contrast to the Msta-B towed howitzer that formed the basis of this ACS. In fact, the “Msta-S” is the same powerful rifled 152 millimeter cannon planted on the undercarriage of the T-80 tank. A pleasant and useful addition to it is the mounted on the turret machine gun 12,7-mm machine gun "The Rock", capable of firing, including at targets flying at a height of up to 1,5 km. 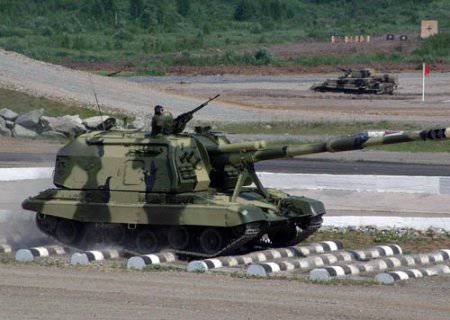 Following the self-propelled guns on Red Square were shown Buk-M 1-2, modernized Buk anti-aircraft missile systems. Of course, the whole complex would hardly be interested in the general public - it includes a number of machines, including a target detection station, a command post, a launcher, repair and maintenance machines, and so on. The parade was attended only by the most spectacular component of the SAM, a self-propelled firing system. And although the Buk-Ms themselves were modernized in the late 1970s, in the second half of the 1990s they were again refined to use new missiles capable of speeds up to Mach 4. Buk-M 1-2 remain a dangerous force capable of hitting tactical ballistic and aviation missiles, land, air and sea targets. 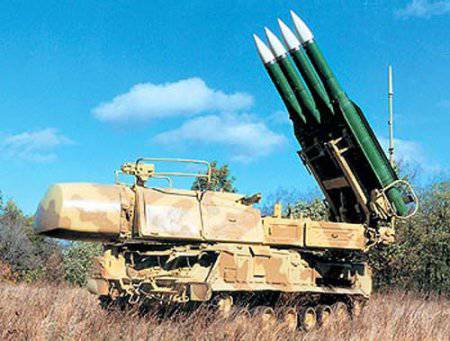 Another participant in the parade is the Pinocchio heavy flamethrower system, a volley of which, according to the military, destroys all life within a radius of 3 km. Outwardly, TOS-1 looks like a tank on which instead of a tower a package of guides containing 30 missiles is installed. Fire can be conducted both singly and with doublets - and you can release the entire "clip" in some 7,5 seconds. However, about this really scary weapons better read in our article "Pinocchio ignites." 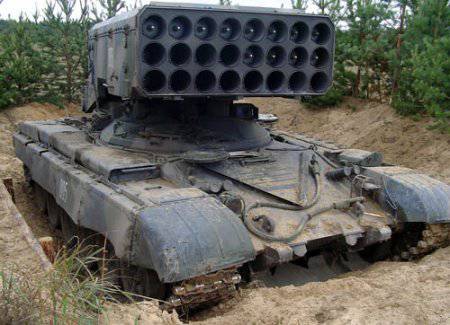 Finally, the direct heirs of the “Katyush” of the times of the war, multiple rocket launchers (MLRS) “Smerch”, the most powerful in the world, swept across the square. It is believed that "Twister" is almost invulnerable to the enemy. Imagine: having received the target designation data, such a machine in 3 minutes is completely manufactured for battle, in 38 seconds it gives a full volley - and in another minute it is removed from the scene. There is no time left for the enemy to respond. If anyone ever remains alive: jet ammunition "work" at a distance of 90 km, covering the area up to 672 thousand square meters. Unfortunately, in the conditions of those wars with which the military and our country and the whole world have to face in recent years, this technique is still not very suitable. A Smerch volley in the locality where the militants sheltered will not leave anything from him, either militants or civilians. 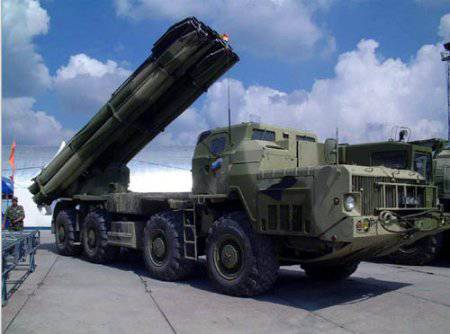 After Smerch, the parade met the C-400 anti-aircraft missile system and the Iskander operational-tactical complexes, another hero of our reviews, about which it is better to read the relevant notes: Triumph and Iskander the Great. Moreover, these are really extremely interesting and effective examples of modern weapons - for illustration it is enough to say that Triumph is capable of simultaneously firing 36 air targets, hitting airplanes, cruise missiles, ballistic missile warheads at a distance of up to 400 km. Impressive? Impressive. 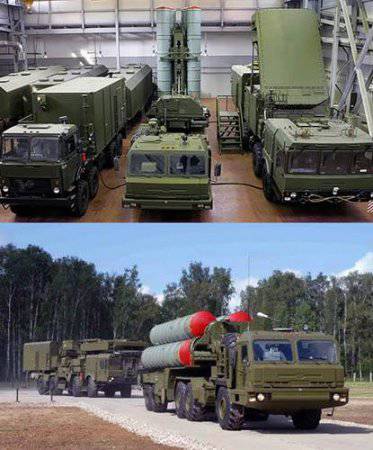 Closed the parade, as expected, the main stars. And the main stars, as expected, were RT-2ПМ2, they are also “mobile strategic missile systems,” they are “Topol-M”. They carry the 15Ж65 solid-fuel three-stage rocket, developed after the collapse of the USSR, a thunderstorm of any heap. With a range of up to 11 thousand km, it delivers an 1,2-ton thermonuclear charge with a power of 550 kilotons of TNT to the target. According to the military, this missile is capable of overcoming any existing missile defense system, as well as any of those that may appear in the short and medium term. It remains to add that this Victory Parade was the first demonstration to the general public of new weapons in the arsenal of our nuclear forces. 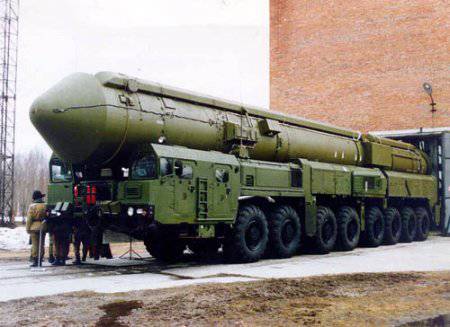 Celebrating the anniversary of the victory of the Soviet Union in the Great Patriotic War, representatives of all military branches took part in the parade. Special attention of the public, of course, was attracted by the equipment, from the well-earned T-34s to the latest rocket complexes.