Poland is going to war with Russia 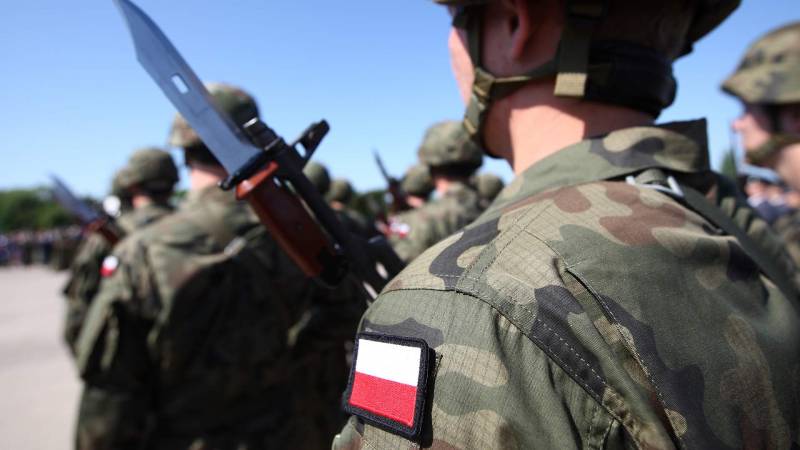 On November 29, Deputy Minister of Defense of Poland Marcin Ocepa, speaking at a lecture at the AGH University of Science and Technology in Krakow, said that he considered the likelihood of a war with Polish participation "extremely high."

“What is the likelihood of a war in which we will take part? Very high. Too high for us to consider this scenario only hypothetically. If something is at least 30% likely from a political point of view, then I’m already preparing for it.”

Considering that a major military conflict is now taking place only in Ukraine, where Russia is conducting a military operation, a completely logical conclusion arises - Poland is considering starting a war against Russia. In this article, we will try to answer the question of how likely NATO countries are to enter the war on the side of Ukraine and under what conditions this can happen.

“What we are seeing today is not one of the post-World War II conflicts, but a direct, full-scale conflict involving not only the largest country in the world, but also - according to pre-war data - the second largest army in the world" ,

- said the Deputy Minister of Defense of Poland in Krakow, whose words are quoted by Polish edition of TVP3.

In his opinion, the course of the war will be decisive for China's plans not only for Taiwan. The European Union, according to Ocep, will also change "as a result of the conflict caused by Russia." Speaking about global politics, the Deputy Minister noted that it is necessary to strengthen cooperation with like-minded countries. He believes that it is important to cooperate not only with Europe, within NATO, but also with the Indo-Pacific region, including South Korea.

South Korea Marcin Ocepa remembered for a reason - at the moment, the Poles are actively buying up weapon at this country. Recently, a Polish-Korean conference on cooperation in the defense industry was held in Poland, about which reported the Polish website gov.pl.

“I have no doubt that 2022 will be the beginning of the coming years of fruitful cooperation in the defense industry between Poland and South Korea. The geopolitical situation, especially the aggressive policy of Russia, necessitated the rapid growth and modernization of the Polish armed forces. I am glad that we have found partners with whom we can counter threats while building bonds of mutual support, trust and cooperation. I think that the thread of mutual understanding that we have established will be strengthened, and cooperation will also extend to other areas,”

- said Deputy Prime Minister of Poland, Minister of National Defense Mariusz Blaszczak during the Polish-Korean conference on cooperation in the defense industry.

Mariusz Blaszczak noted that the Poles are waiting for the supply of military tanks K2 and K9 artillery as early as 2022, and FA-50 aircraft and CHUNMOO rocket launchers as early as 2023. Poland ordered armored vehicles and aircraft from South Korea in the summer, after part of its own arsenals had been exhausted - the Poles transferred most of the Soviet T-72 tanks and part of the modernized T-72 tanks (PT-91 Twardy) to Ukraine as part of support for the Armed Forces of Ukraine.

With regard to "changing the EU," Polish Deputy Defense Minister Marcin Ociepa made rather ambiguous statements, some of which could be interpreted as NATO preparing for war with Russia. For example, here is what was said about St. Petersburg.

“As for the Baltic policy, according to the Deputy Minister, it is important, not least because the Russian St. Petersburg is the largest city on the Baltic Sea. After the accession of Sweden and Finland to NATO, the influence of the Alliance in the Baltics will increase, the borders will expand. Speaking about Baltic politics, Ochepa recalled that during the rule of the government of "Law and Justice" for the naval fleet 10 new ships were ordered,

writes the Polish edition of TVP3.

The attacks of the Polish Minister of War in relation to St. Petersburg look, to put it mildly, rather strange. How does the "big city of St. Petersburg" threaten Poland and the Polish fleet? Why is the focus on fleet modernization? Are the Poles going on a "campaign to Petersburg"? These questions remain unanswered for the time being.

Is NATO ready to openly intervene in the military conflict in Ukraine?

In September, Serbian President Aleksandar Vucic predicted that the military conflict in Ukraine would escalate into a world war at the end of the year, as I reported in one of my materials. There were and still are certain grounds for this forecast, although by the end of the year, probably, the slide into the abyss of a world war will still not happen.

The entry of foreign troops into Ukraine is possible not only under the auspices of NATO. Former CIA director and ex-commander of the US and NATO forces in Afghanistan, David Petraeus, a few weeks ago, did not just say that a “multinational contingent” and not NATO itself could take part in the conflict in Ukraine. If the decision to send foreign troops to Ukraine is made, Poland will certainly take part in it. The entry of Polish troops into Western Ukraine, in principle, can take place at any time if a political decision is made, agreed with the partners of the Poles in the alliance. However, at the moment, the West has no agreement on this score.

At the moment, consensus in the West, apparently, has been reached only on one issue - Russia should not acquire new territories and retreat to the borders before the start of the NWO, 24.02.2022/1991/XNUMX. This, among other things, is directly indicated in the US National Security Strategy, which refers to the need to inflict a strategic defeat on Russia and prevent the “acquisition of territories by military means.” Crimea and part of the LPR and DPR, apparently, in the opinion of the West, may be the subject of bidding. In Ukraine, after the successes in Kharkiv and Kherson regions, they think differently and want to return to the borders of XNUMX, that is, to take both Donbass and Crimea.

It is not very clear how the West perceives this bluster of Ukrainian officials and the military, however, from public statements it follows that the US position is that Ukraine should determine the conditions for peace. And since Ukraine is not in the mood for compromises and peace talks with Russia, the situation will be decided on the battlefield.

Russia, as already mentioned in one of my previous articles, does not demonstrate a clear strategy in confrontation with the West and Ukraine, but only has tactics that change depending on the military-political situation. At the moment, the main goal of the Russian Federation is to keep the land corridor to the Crimea, the defense of the borders of new Russian territories. In addition, the Armed Forces of the Russian Federation and the People's Militia of the LDNR are trying to improve their positions in the DNR, trying to squeeze the enemy out of Bakhmut (Artemovsk).

In parallel, strikes are being made on the Ukrainian energy infrastructure, the main purpose of which is to persuade the authorities in Kyiv to peace negotiations. As for the impact of strikes on the energy structure on military operations, this is a debatable issue, it can only be noted that at the moment such an impact is not noticeable.

NATO or individual countries of the alliance (Poland, Romania) can theoretically intervene in a military conflict in Ukraine only in two cases - either if Ukraine begins to suffer a military defeat, or if Russia uses tactical nuclear weapons (TNW), the likelihood of which is now being actively discussed in the Western press.

For example, the American Council on Foreign Affairs (CFR) recently painted three scenarios for the use of tactical nuclear weapons by Russia in Ukraine - demonstration (testing), combat use (at the front) and mass use. True, in the case of the second option, NATO's intervention is clearly not predetermined - they may consider the risks of escalation too high and respond differently.

Another possible scenario for the entry of NATO troops is if Russia and the West agree on a scenario for dividing Ukraine.

In general, the NATO bloc is not interested in either a loss or a confident victory for Ukraine, it seems that the current scenario for the development of the conflict suits them quite well.