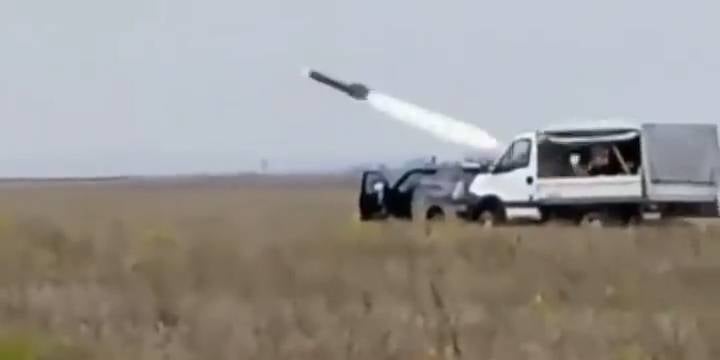 Launch of a Brimstone rocket from a Ukrainian-made launcher. Photo Telegram / BMPD

It became known that the UK began to supply the Kyiv regime with modern Brimstone 2 guided missiles. It is assumed that such weapon, which has enhanced tactical and technical characteristics, will help Ukrainian formations in solving combat missions. However, as practice shows, the effective use of foreign innovations is always in question.

Back in the spring, Great Britain provided the Kyiv regime with the first batches of Brimstone missiles of the basic modification. The transfer of at least hundreds of missiles of this type was reported. For their use, the Ukrainian side has manufactured a number of improvised launchers based on civilian trucks.

Subsequently, rocket launches were repeatedly demonstrated, but their results remained unknown. Apparently, the shooting was carried out "in that direction" with a predictable lack of practical benefit. In addition, our fighters repeatedly found fallen rockets, in which the fuse and self-liquidator did not work.

At the beginning of the twenties of November, reports appeared in the British press about the continued supply of guided weapons to Ukraine. This time, newer Brimstone 2 missiles were included in the next batch of weapons.

A few days later, the British Ministry of Defense confirmed this information. It also published a video of the transport of such weapons. It showed the loading of containers with missiles into a military transport aircraft and its flight to one of the Eastern European airfields used as a transshipment point. 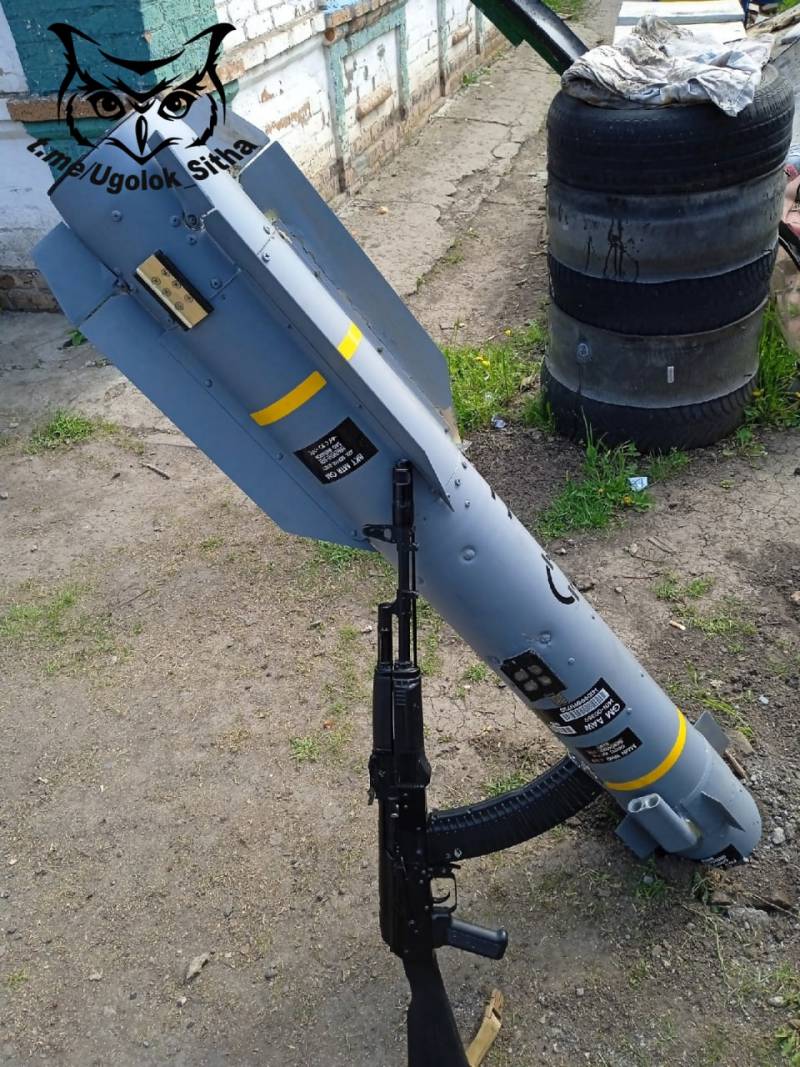 Unexploded rocket. Photo Telegram / "Corner of the Sith"
Details of deliveries are not reported. In this regard, it is not known when the Brimstone-2 began to be sent to Ukraine, how many missiles are planned for transfer, etc. However, the Ministry of Defense and the press did not forget to talk about the technical characteristics and advantages of such a missile, as well as its benefits for Ukrainian formations.

Apparently, a number of new Brimstone 2 missiles have already hit Ukrainian territory. Information on the use of such weapons has not yet been received. However, the current situation forces the Kyiv regime to use all available means as quickly as possible, and therefore British missiles may appear on the front line in the very near future.

The first version of the Brimstone ("Sulfur") guided missile for different platforms has been created in the UK since the eighties. Several companies were involved in the development; the project is now owned by MBDA. For various reasons, the development process was interrupted and faced with delays, and the missile entered service only in 2005. Shortly thereafter, the development of new modifications began.

In 2010, the British Ministry of Defense launched the development of a deep missile upgrade, designated as Brimstone 2 or Selective Precision Effects At Range Capability 2 (SPEAR 2). Its goal was to improve flight performance, create new guidance tools with advanced capabilities, etc. At the same time, it was necessary to maintain the same dimensions and weight, as well as compatibility with existing media. 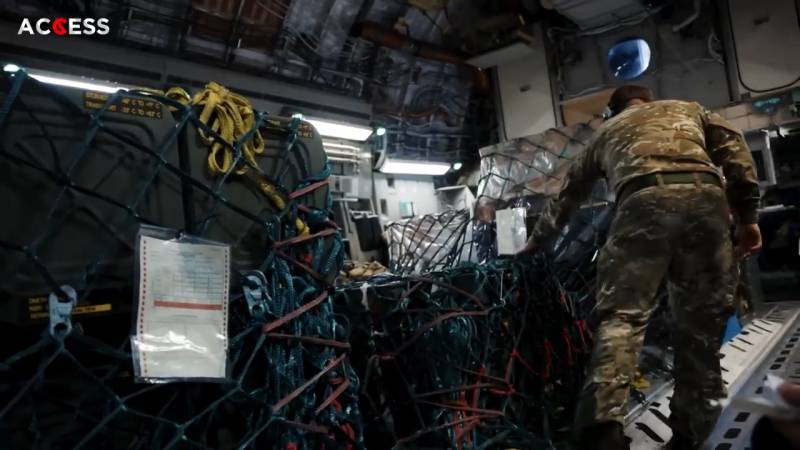 Loading Brimstone 2 missiles for shipment to Ukraine. Photo Telegram / BMPD
In 2013, the Brimstone 2 project reached the testing stage. Missiles were launched from air carriers at various ground targets. After some modifications, the missile system was recommended for adoption. Deliveries of serial products to the armed forces of Great Britain began in 2015-16. The first combat carriers of the new missile were Tornado GR4 aircraft and AH-64E helicopters.

Also in the middle of the decade, MBDA began looking for new customers, but did not succeed in this. No country has so far been willing to buy the upgraded Brimstone, although the first version of the missile is enjoying some popularity in the market. In fact, Ukraine is now becoming the first foreign recipient of the new weapons. Perhaps this delivery is considered as a way to advertise a promising product.

The upgraded Brimstone 2 rocket does not outwardly differ from the base sample. The same cylindrical body 1,8 m long, 180 mm in diameter with a hemispherical head fairing and two sets of planes was used. The starting weight, as before, is 50 kg. At the same time, all the key components, on which the performance characteristics depend, went under the replacement.

Brimstone-2 received a new solid-propellant engine with improved parameters. With its help, the maximum flight range was brought to about 60 km - twice as much as that of the base rocket. However, such performance is achieved only when launched from an aircraft at high speed and an altitude of approx. 6 km. When launched from a helicopter, the range does not exceed 40 km, from ground platforms - even less. 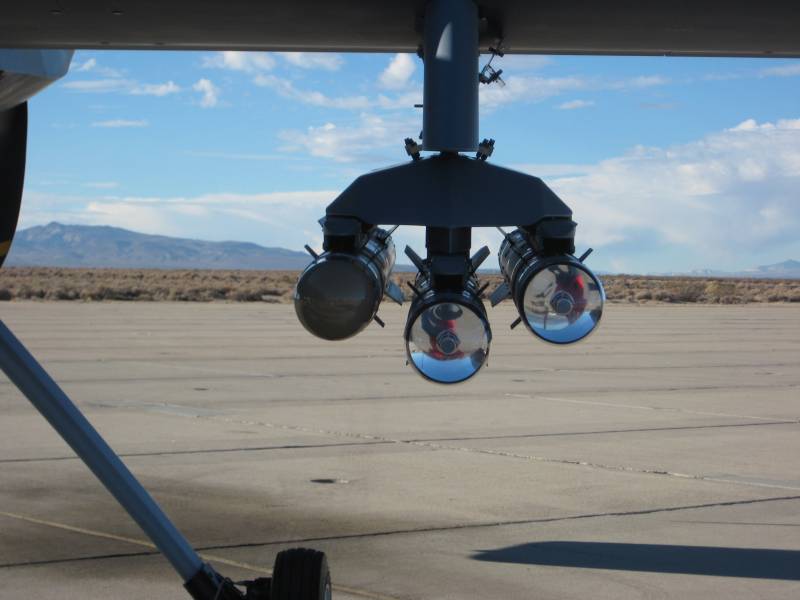 Missiles of various modifications. Photo MBDA
In the course of modernization, the composition of the guidance means has changed. Flight to the target area is carried out using inertial navigation. An advanced active radar homing head and a semi-active laser are responsible for finding the target.

Like its predecessor, the missile carries a tandem HEAT warhead with a total mass of approx. 6,3 kg. The use of a new high-yield explosive resistant to external influences is reported. Penetration is not specified. "Brimstone" of the first version could penetrate 800 mm of armor behind dynamic protection. Probably, the upgraded rocket shows better performance.

In general, the Brimstone 2 missile is a modern and effective weapon with fairly high tactical, technical and combat characteristics. Its advantages are an increased flight range, the presence of several means of guidance and a fairly powerful warhead. All this makes it possible to attack various remote targets with high accuracy, which has been repeatedly demonstrated during tests.

It is easy to see that Ukraine does not have all the necessary means and opportunities for the full use of the full potential of British missiles. Because of this, she will not even be able to get close to the maximum performance and get the desired efficiency. In addition, the results of the use of missiles will be affected by opposition from the enemy in the person of the Russian army.

"Brimstone-2" is distinguished by an increased launch range, but a flight of 60 km is possible only when dropped from a carrier aircraft. Whether Ukraine will be able to adapt the aircraft it has left to use such a load is a big question. At the same time, she has improvised truck-based self-propelled launchers. However, when launched from the ground, the flight range is sharply reduced. 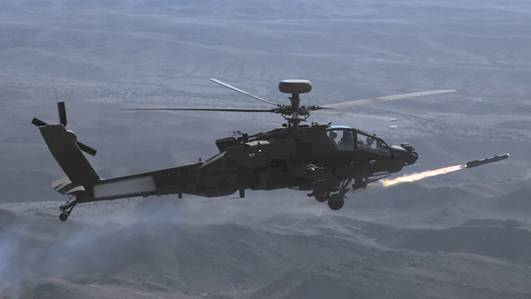 Rocket launch by AH-64E helicopter. Boeing Photos
Due to the long range of the missile, the complex needs separate means of reconnaissance and target designation. In its absence, various limitations and difficulties arise, and attempts to bypass them will not give the desired result. In particular, firing "at random" with the expectation that the missile itself will find a target in a given area, or direct-fire launches at a limited range are, at the very least, a dubious measure.

It should be remembered about the opposition from the Russian army. So, it can knock out the reconnaissance means of the missile system or suppress the missile guidance means. In addition, it is quite possible that modern domestic anti-aircraft systems are able to detect and hit Brimstone in flight.

Due to range limitations, there are also risks for the missile system / launcher. They can be identified and affected, incl. artillery fire. The ground version of the Brimstone 2 does not exceed the range of common large-caliber guns in range, which creates known risks. In fact, the only salvation from a retaliatory strike is the mobility gained from the automobile chassis.

Ukrainian formations are receiving new foreign missile weapons and are probably already mastering it, and are also preparing for real combat use. The Brimstone 2 rocket features increased tabular performance, which gives rise to optimism and enthusiasm. However, the actual situation imposes a number of limitations, and the two versions of Brimstone in practice will not have significant differences and will not be able to show outstanding results.

However, the UK provides the most modern version of the missile. The reasons for this are simple. London has its own interests in Ukraine and is ready to support the Kyiv regime in all available ways, incl. through the supply of modern weapons. In addition, in the case of Brimstone-2, it becomes possible to advertise your weapon. However, one should not expect that such an "advertising campaign" will be effective and will seriously affect sales.