As has been noted more than once in "VO" (And again about the boomerang of sanctions), almost all foreign British territories until the end of October 2022 remained in the Russian Federation outside the list of “unfriendly”, that is, subject to Russian counter-sanctions. Not so long ago, this gap was filled: on October 30, the Russian government added eleven British overseas territories to the "unfriendly" register.

Of course, this happened against the background of the continuing deterioration of Russian-British relations. Therefore, it is not surprising that under pressure from London, the authorities of the same eleven British territories began to impose economic sanctions against the Russian Federation from August-October.

Including, first of all, full or partial freezing of Russian assets; prohibition or restrictions on re-export to and from the Russian Federation; for transactions in Russian rubles; an embargo on investments, including foreign ones, from these territories into the Russian economy. Restrictions began to be introduced even on Russian tourism in these territories.

Recall that most of all British territories abroad are well-known re-export and offshore centers of global rank. According to British sources (2021-2022), at least a third of Russian offshore assets are registered in the same offshore territories in London; at least a third of re-export operations between the Russian Federation and abroad are carried out, again, through these territories. And all this is by no means the first year.

The inclusion in the unfriendly register of the British Chagos Archipelago in the center of the Indian Ocean and the Falkland Islands is an indirect support for the long-standing demands of Argentina and Mauritius for the return of these territories to them. By the way, the British-American military bases on Chagos do not interfere with offshore business in the same archipelago...

It is noteworthy that the British territories that have been preserved since 1959 in the south and southeast of Cyprus are included in the unfriendly list: Akrotiri and Dhekelia (260 sq. km in total). But here there are no offshores at all: the British Air Force, Navy facilities and intelligence facilities account for at least 70% of the total territory of those areas. They are also of strategic importance for British and generally NATO control of the Eastern Mediterranean and the Suez Canal.

To clarify: Cyprus became independent from London in August 1960. But according to Article 3 of the indefinite “Treaty of Guarantees and Independence, the Territorial Integrity of the Island of Cyprus” (1960), the Republic of Cyprus, Greece and Turkey assume “the obligation to respect the integrity of the regions.

After the formation of the Republic of Cyprus, they all remain under the sovereignty of the United Kingdom, and guarantee their use by the United Kingdom. For its Cypriot areas, Britain has made the following commitments:

– do not develop them for non-military purposes;
– not to establish for them the status of a colony and not to manage them as a colony;
- not to create customs posts or other border barriers with the territory of the Republic of Cyprus;
– not to expropriate private property there, except for military purposes and for compensation. 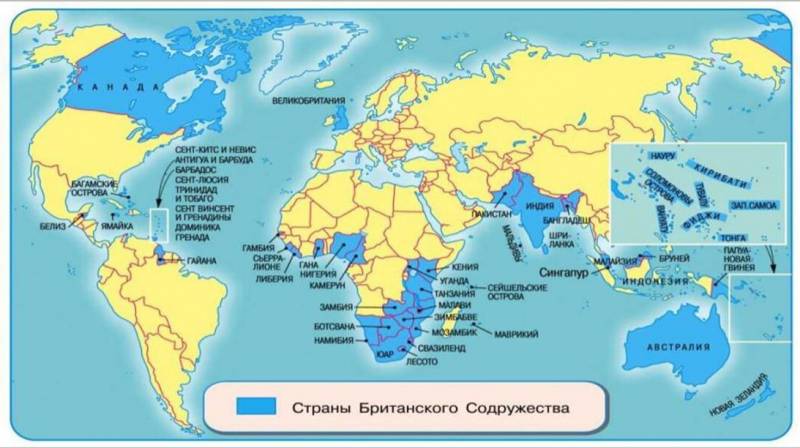 The administration of the British "sovereign territories" is subordinate to the British Ministry of Defense; Elections to the British Parliament are not held here. The same areas have their own legal system based on the British colonial acts in force in Cyprus in the second half of the 1950s. So the colonial status of Akrotiri and Dhekelia is almost respected...

Characteristic in this regard is the fact that Turkey's military invasion of Cyprus in 1974 stopped literally in front of the gates of the British Dhekelia. But the then requests of Athens and Nicosia to London to stop the Turkish invasion with the help of the same British bases remained unanswered. But these bases were used during NATO operations in Yugoslavia, the Libyan Jamahiriya, Iraq, Somalia and Syria.

And in October 2022 and earlier, it was reported that not only the British Air Force, but also American drones, after taking off from Akrotiri, often cruise near Crimea. In a word, the hostility of the British areas in Cyprus towards Russia is all the more obvious ...

Looking from London to the Commonwealth

But, if we consider the situation in a broader context, the inclusion of all the mentioned territories in an unfriendly registry indirectly, if not directly, limits London's plans to play what is called an "independent" role in the world, as few others have. In direct connection with the notorious Brexit.

In any case, the British plans to increase their influence on the financial and economic policy of the Russian Federation in general are failing in connection with the mentioned decision of Russia. Moreover, since the second half of 2022, exchange trading in the British pound has been stopped in the Russian Federation, and since the fall of 2022, exchange transactions with this currency have not been carried out.

However, London, claiming its former positions in the world, is also trying to act through the British, or rather, unambiguously oriented towards the British crown, "Commonwealth of Nations". For example, since July of this year, seemingly "pro-French" Gabon and Togo have become members of the Commonwealth. Where, let us recall, the military bases of France are still preserved - the franc still operates today - the currency that is actually controlled by the French treasury, which has long since switched to the euro.

According to a number of data, ex-French Benin, Madagascar, Mauritania, as well as Sudan and South Sudan are planned to join the same Commonwealth in 2023 (the entire Sudan, we recall, was an Anglo-Egyptian protectorate until 1955 inclusive).

In parallel, London is still implementing the project of Theresa May and Boris Johnson to transform this association into an analogue of the European Union. Accordingly, the UK, Canada, Australia and New Zealand introduced new exemptions for the import of goods and services from other Commonwealth countries in 2022; written off bоthe bulk of the debts of the 35 least developed countries of the Commonwealth to Great Britain and the mentioned dominions.

In other words, London is still determined to take revenge for past mistakes and shortcomings?..