Unmanned boats with the ability to work autonomously

November 1, 2012
15
A few days ago, a prototype of a new military equipment was tested off the coast of the US state of Maryland. The remote-controlled boat entered the training area and launched a Spike anti-tank missile attack. Training rocket launch was considered successful. Behind a couple of lines of text is a big job and no less great prospects. The PEM project (Precision Engagement Module - “High-Precision Battle Module”) was launched with the aim of creating a set of equipment that will allow you to make a full-fledged combat unit out of a light water craft that can cope with a large number of tasks.

Remotely controlled boats and boats have the same great prospects as flying drones. Theoretically, this class of equipment is capable of being accomplished by almost any task that can be set for a combat or transport vehicle. The unmanned ship can carry cargo, including in difficult conditions, without endangering the crew. The same can be said about remote-controlled boats with weapons. In addition, the absence of the need to ensure the work of the crew, such equipment may be smaller and / or carry more ammunition. However, any military equipment with remote control is subject to "attack" by means of electronic warfare. Radio control can be drowned out, which is why an unmanned aircraft or a boat will become useless. In recent years, several projects have been launched, designed to give unmanned boats and boats greater autonomy, at least in terms of entering the mission area. 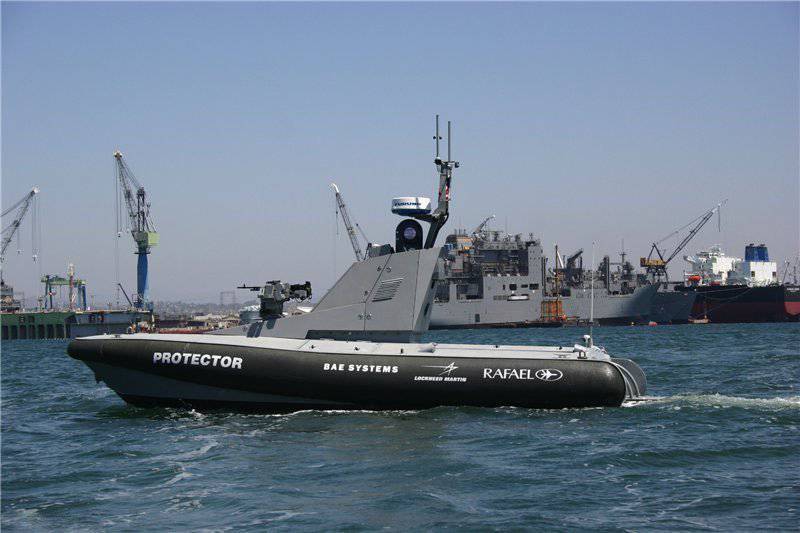 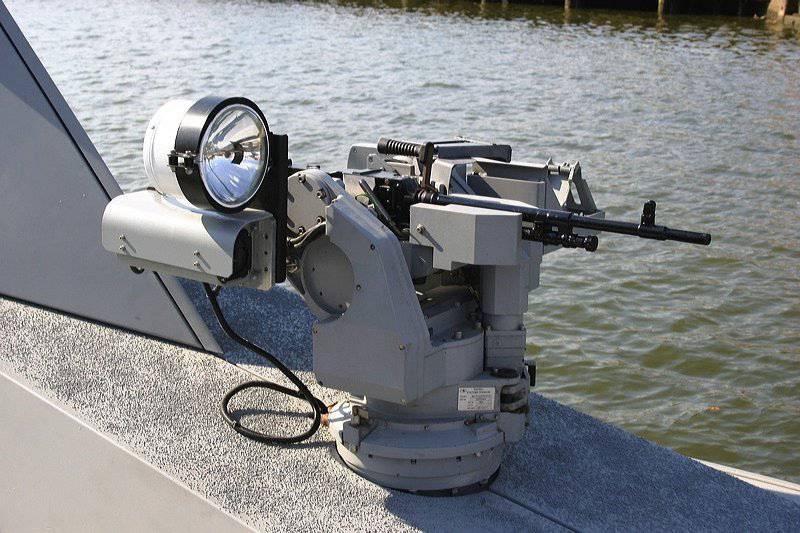 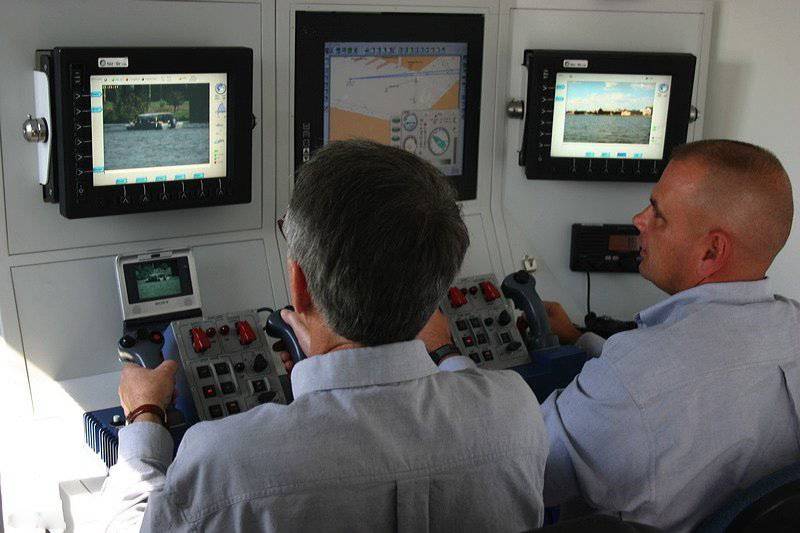 One of the first to deal with this problem Israeli engineers from the company Rafael. In the middle of the two thousand years, they presented an unmanned boat Protector ("Defender"). This development is designed to patrol waters, intelligence and attack relevant targets. A characteristic feature of the on-board electronics "Defender" was the ability to switch control modes. Depending on the tactical situation and the need, the boat can be controlled over the air from a console on a ship or at a ground command post, and is also capable of performing some simple operations in a fully automatic mode. In the latter case, the electronics of the boat, using inertial and satellite navigation, can bring the craft to a given area, for example, where the target is located. Then control is transferred to the console and the operator can attack the target. According to some reports, the Protector, like unmanned aerial vehicles, has the ability to automatically return to the base in case of loss of the control signal. Rumor has it that now Rafael specialists are working on an automatic recognition and attack system for targets. Official data on this issue yet.

Structurally, the Protector boat is a modified rubber boat with a set of equipment installed on it. On a standard-looking boat, a special unit is installed with a superstructure. It is noteworthy that the latter has the characteristic contours characteristic of techniques with low radar visibility. At the top of the superstructure is a small mast with communication antennas, as well as a spherical housing of the optical system. The latter serves to collect visual information and its transfer to the operator. The optical system is installed on a rotating and swinging base, so that the operator can view almost all the surrounding space. Directly in front of the superstructure is the multipurpose stabilized Mini-Typhoon installation, designed for the target equipment chosen depending on the current target. This may be an optional intelligence module or weapon. In the case of the combat mission, the Defender bears a machine gun or a missile complex of suitable dimensions. Thus, the unmanned boat Protector can perform a wide range of different tasks. Some of these boats are in service with the Israeli Navy.

The high potential of the Israeli development quickly became interested in the US military, who soon bought several copies of Protector boats for testing and study. Over the years, American experts from Lockheed Martin and several other companies in the naval industry have carefully studied all the structural elements and made a number of useful conclusions. In addition, using Israeli practices, a PEM project was created, partially similar to Protector. At the same time, the Americans decided to significantly change the concept of using an unmanned boat. Their PEM should have a much greater impact potential, which in the future will significantly expand the range of tasks. It is worth noting that the installation of missile weapons on a boat is somewhat reminiscent of the well-proven idea of ​​a mosquito fleet. In addition to providing serious shock capabilities, the Americans are also going to make their boat as autonomous as possible. For these purposes, a unit for detecting and recognizing targets has been developed for several years. 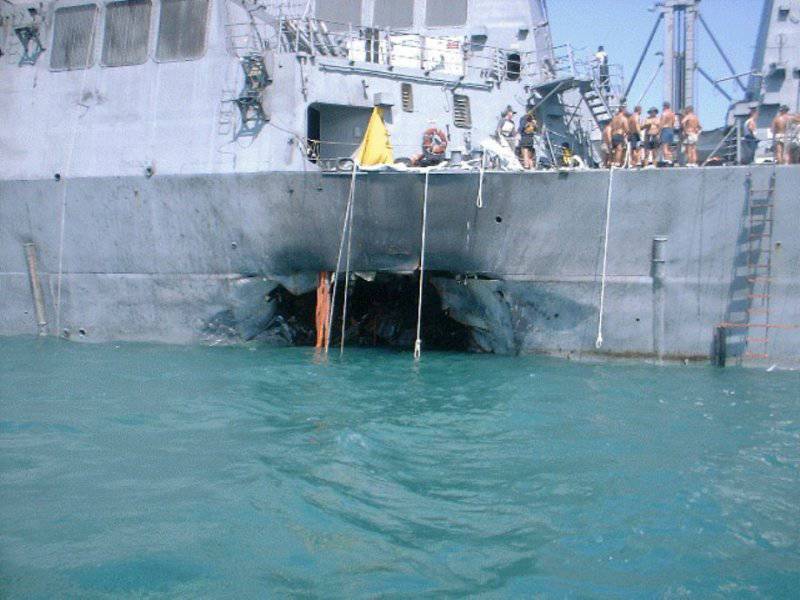 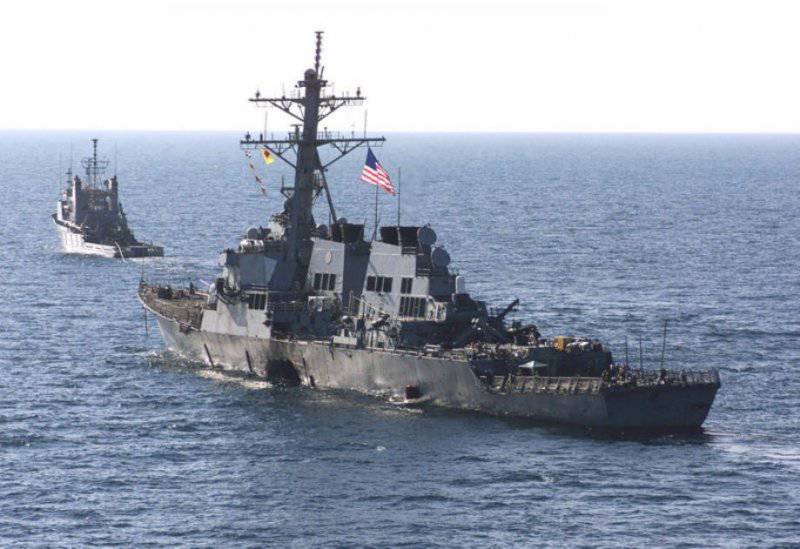 After an attack using a boat with explosives (2000 year, Yemen), the destroyer URO “Cole” lost 17 people killed and 39 wounded. And large ships can be difficult to resist boats.

As a result of the design work, a combat complex should be created, which can automatically not only reach the target area, but also find and attack it. By now, the automatic control system is only partially ready: PEM can independently enter the target area using inertial or satellite navigation, but further execution of the combat mission remains the responsibility of the operator. As a matter of fact, this is exactly how the recent launch of the Spike rocket was made. After the launch of the launch, the operator launched a rocket. The choice of the type of anti-tank missile complex, in the first place, was due to the type of missile guidance. Spike ATGM is aimed at the target using an infrared head and, as a result, does not require additional equipment on board the boat. In the future, PEM can also receive anti-aircraft weapons, for example, FIM-92 Stinger missiles, which have the same targeting system as the Spike ATGM. However, in the case of relatively large anti-aircraft missiles will have to decide the question of the place for their installation.

In addition to the difficulties in creating electronics with full autonomy, there are certain problems with the base for such boats. At present, both the Israeli Protector and the American PEM are made on the basis of light, flat-bottomed, inflatable structures. It is not difficult to guess what is the seaworthiness of these floating UAVs. In fact, they can work only at a short distance from the coast or the base of the ship and are not able to act even with average agitation. The only tolerable way to improve the seaworthiness is to increase the size, but a larger floating craft is not yet appropriate and does not meet the requirements of the military. Thus, in the current state, the American PEM project is purely experimental and in the near future it will not be able to become full-fledged military equipment. As for the Israeli “Defender”, he has served in the naval forces of his country for several years. The characteristics of the territorial waters of Israel allow us not to strive for high characteristics of the course and to pay more attention to the onboard equipment. There is a different approach to the creation of technology, due to the different conditions and wishes of potential customers. With a high degree of probability, we can assume that PEM will ultimately remain just a platform for developing new technologies, which will later be used in other projects.