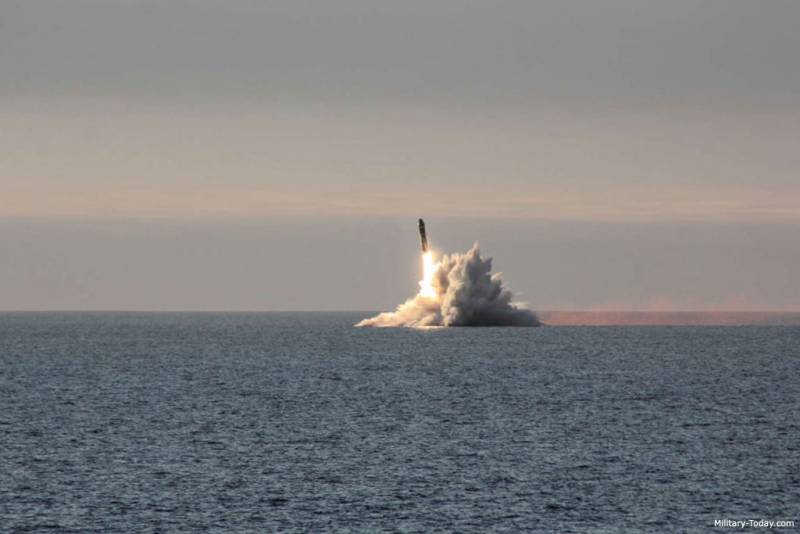 One of the test launches of the Juilang-3 rocket. Photo military-today.com

The combat strength of the naval forces of the People's Liberation Army of China has several strategic submarines of the 094 project. Until recently, their main armament was the Julang-2 intercontinental ballistic missiles. It has now become known that the Navy has re-equipped these ships with the new JL-3 ICBM. It has higher performance and is a more effective means of strategic deterrence.

According to foreign data

On November 18, a press conference was held in Washington with the participation of the commander of the Pacific fleet US Admiral Sam Paparo. The military leader spoke about the current work and challenges, and also revealed new challenges. According to him, another step by China in the development of the naval component of the strategic nuclear forces poses a danger to the United States.

Admiral Paparo said that the Chinese Navy had re-equipped its SSBNs. Now six submarines "Type 094" are modern intercontinental SLBM "Juilang-3". These ships and their weapon, as the admiral noted, created to threaten the United States. The US Navy is keeping a close eye on such a threat.

The results of such surveillance have not yet been disclosed. The commander of the fleet did not specify whether the Chinese submarines went on combat patrols. It is also not reported whether they appeared near the Hawaiian Islands or in other areas of great importance to the United States.

It should be noted that only the American military department has so far reported on the rearmament of Chinese SSBNs. Chinese officials neither confirm nor deny such news. Even if the PLA Navy is carrying out the replacement of weapons, these processes are secret and are not reported. Perhaps this will be discussed in the future.

The construction of the naval component of the strategic nuclear forces of the PLA, capable of keeping the distant objects of a potential enemy at gunpoint, began in the seventies and eighties. By the beginning of the nineties, the first Chinese SSBN, built according to the 092 project, was accepted into the combat structure of the Navy. Later, the development of a new project, known under the index "094", began. It was possible to bring it to a full-fledged serial construction of ships. Right now, work is underway on the next "Type 096", and the construction of such SSBNs is expected. 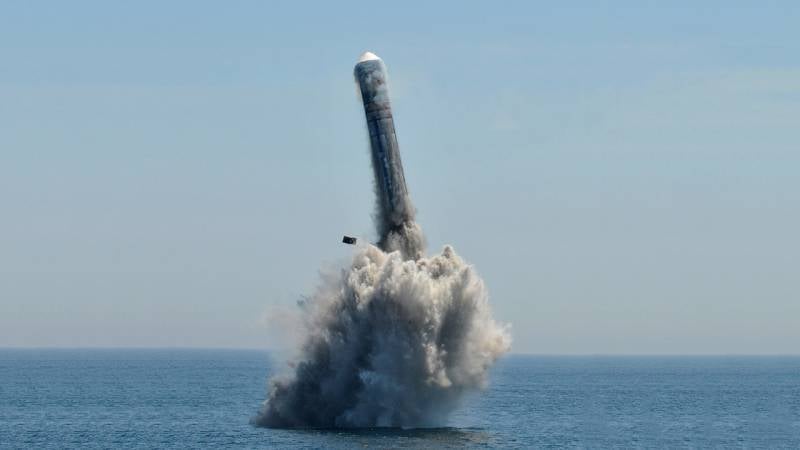 Launch of the JL-2 rocket. Photo defpost.com
According to various sources, the only Type 092 submarine still remains in the Navy. It is equipped with 12 silo launchers for medium-range missiles "Juilang-1" of the basic or upgraded version. The JL-1 SLBM, according to foreign data, had a range of less than 1800 km, and for the improved JL-1A this parameter reached 2500 km.

At the beginning of the 094s, the construction of the lead Type 2007 SSBN began. She was commissioned no later than 094, and she still remains in service. Then, according to the original project "XNUMX", three more ships were built. As reported, the last of them was completed and brought to service only last year.

In the future, the Type 094 project was upgraded, but its details remain unknown. The first submarines of this modification were laid, approximately, in the middle of the tenth years. Not later than 2020-21, two such SSBNs were accepted by the customer. As a result, the total number of submarines reached 6 units.

Like its predecessor, SSBN pr. "094" have 12 silo launchers for SLBMs. Initially, they carried JL-2 missiles with a range, according to various estimates, of at least 7 km. Now it is reported about the rearmament of the promising missiles "Juilang-3". Such products are capable of sending a load of 12 thousand km or more.

It is known about the development and preparation for the construction of the next series of SSBNs under the designation "096". Perhaps the lead ship of this type has already been laid down. It is believed that the new submarines will carry promising JL-3 missiles, but the number of launchers remains unknown. Perhaps, based on the experience of previous projects, a set of 12 shafts is being used again.

According to various foreign sources, the promising intercontinental SLBM "Juilang-3" has been developed since the beginning of the tenth years. The rocket was created in parallel with the project of the boat "096", which in the future was to become its main carrier. However, now it is reported that the JL-3 can also be used with older Type 094 SSBNs. 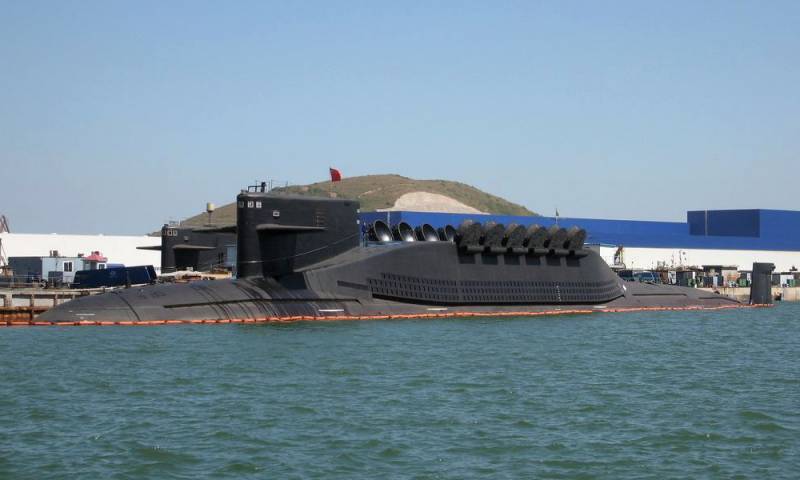 Submarine "Type 094" at the pier, the covers of the launchers are open. Photo US Naval Institute
The first test launch of the JL-3 missile took place on November 24, 2018. Presumably, it used one of the available SSBNs, which had undergone the necessary revision. Subsequently, new launches took place. As follows from the latest news, the tests of the Juilang-3 were successful, as a result of which the product was adopted by the Navy and deployed on combat ships.

According to known data, "Juilang-3" is a three-stage solid-propellant rocket. Due to the use on submarines, the new missile has limited dimensions: the length does not exceed 11-12 m with a diameter of not more than 2 m. The launch weight is estimated at 40-42 tons. The JL-3 is similar in size and weight to the previous JL-2. The estimated range reaches 12 thousand km.

Like other modern SLBMs and land-based missiles, the JL-3 must be equipped with a control system with inertial and satellite navigation. Such means make it possible to obtain a CEP of up to tens of meters at any launch range and when using any type of combat equipment.

It is assumed that the missile is capable of carrying a monoblock or multiple reentry vehicle with individual targeting units. The number of blocks is unknown. The previous JL-2 missile was estimated to carry up to four warheads. Probably, the new JL-3 has no less combat load. The power of combat units is unknown, but should not exceed hundreds of kilotons - for the optimal ratio of size, weight and power. The use of hypersonic gliding warheads is excluded due to the limited dimensions of the missile and launcher.

At present, the PLA Navy has six submarines of the 094 project. According to the American command, they were transferred to modern JL-3 SLBMs. The total ammunition load of such submarine forces is 72 missiles. At the same time, the appearance of the head and serial SSBNs "Type 096" is expected in the near future, each of which will understandably increase the quantitative indicators of the marine component of the strategic nuclear forces.

An estimated range of 12 km makes the Juilang-3 missile an effective tool for strategic deterrence. A Type 094 or Type 096 submarine with such weapons on board, without even moving away from the Chinese coast, is capable of keeping a significant part of the Asia-Pacific region at gunpoint. In particular, it becomes possible to attack targets in the continental United States. 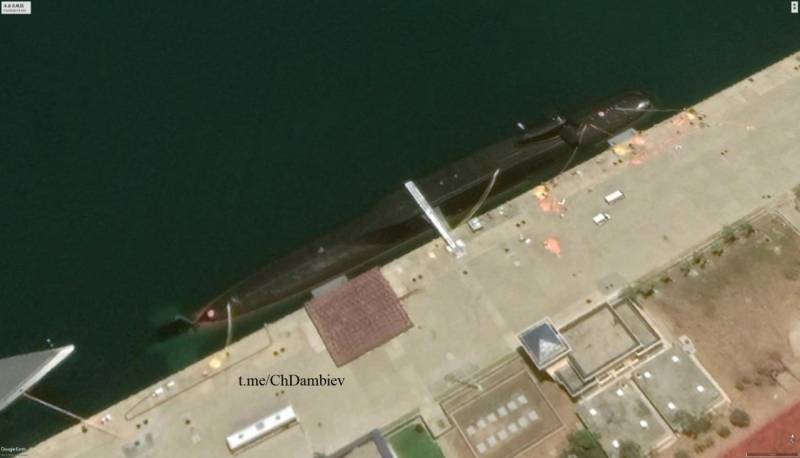 One of the last SSBNs "094" at the base, April 2021. Photo by Telegram / ChDambiev
Obviously, the combat patrol areas of Chinese SSBNs are located not only in the coastal seas, and this expands their area of ​​responsibility. So, when entering the central part of the Pacific Ocean, submarines will be able to control the entire territory of the United States. When on combat duty in other areas of the World Ocean, the zone of responsibility of submarines shifts accordingly - and remains just as large.

Due to the new Juilang-3 missiles, the naval component of the PLA's strategic nuclear forces is becoming a fully strategic weapon. She gets the opportunity to fully threaten a potential enemy with minimal risks to herself, and, if necessary, to effectively solve combat missions.

It is important that the qualitative indicators associated with the transition to a new missile are supplemented by quantitative ones. The Navy already has six or seven strategic submarines in combat formation, and more are expected in the coming years. Even if the fleet begins to write off older ships, the overall performance of the submarine forces will remain at the required level.

Thus, the protracted process of building a full-fledged naval component of China's nuclear forces is producing the required results. The necessary number of modern strategic submarine missile carriers has been built and a promising intercontinental missile has been developed. According to reports from abroad, the new SLBM has already been put into service and is possibly being used on combat duty.

It should be noted that not only intercontinental SLBMs, but also land-based ICBMs, as well as aviation means of destruction. In general, we are talking about the construction of full-fledged multi-component strategic nuclear forces with all the required capabilities. In the course of further development, they will receive full-fledged global capabilities, and it is the marine component that will make a significant contribution to this result.