Transport of the future: over-relief platform for the Russian army 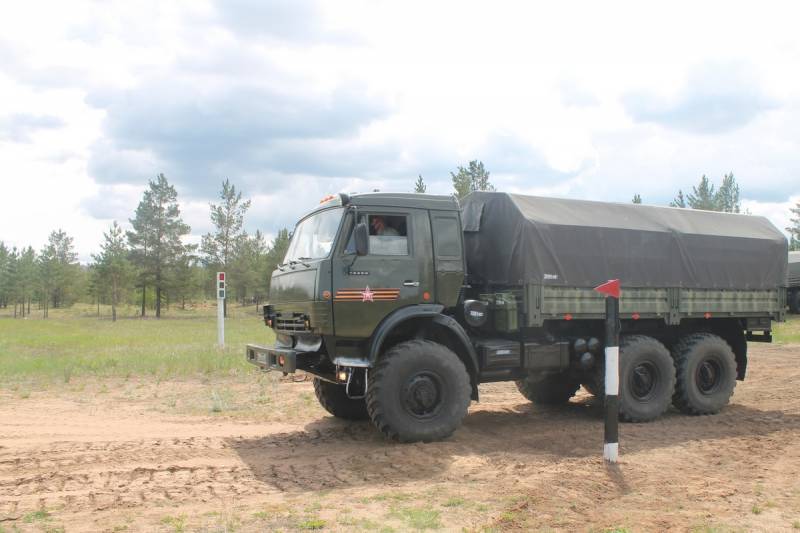 It became known that one of the specialized institutions of the Ministry of Defense began to develop the concept of a fundamentally new vehicle for the army - the so-called. relief platform. As the name implies, a machine of this kind will move above the ground, without contact with the surface. The platform will be characterized by increased mobility and cross-country ability in different areas, which will make it a convenient means of providing army logistics, incl. at the forefront.

The TASS agency reported on the development of new ideas on November 27. Information about these works came from an unnamed source in the military-industrial complex. There have been no official announcements on this yet.

It is reported that the Center for Advanced Weapons at the 46th Central Research Institute of the Ministry of Defense is engaged in a new project. One of the main tasks of this organization is to study and study the prospects for the development of weapons systems, a fleet of vehicles, etc.

A TASS source indicates that the current Special Operation in Ukraine has shown difficulties in the field of logistics. Thus, the speed of movement of people and goods was insufficient. Existing vehicles do not have time to carry out transportation at the required pace. 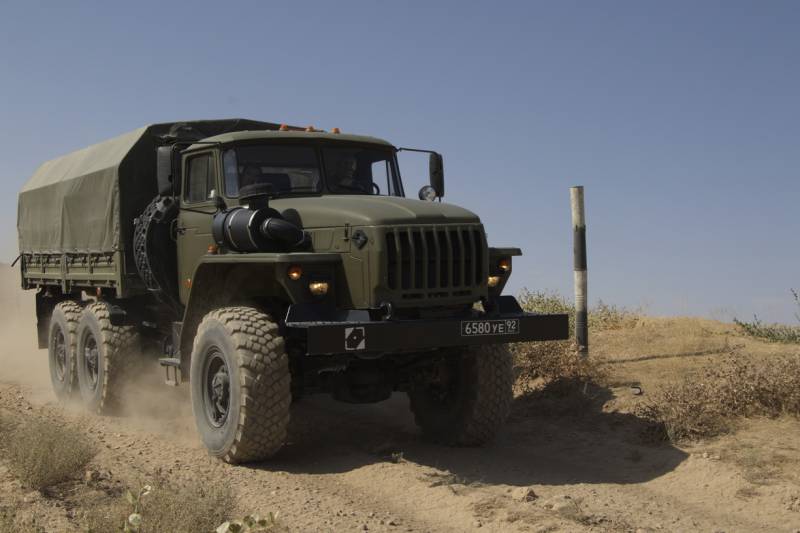 Truck "Ural-4320"
In this regard, the 46th Central Research Institute is working on and developing the concept of the so-called. overrelief transport platform. Such a machine, with the help of appropriate propellers, will be able to rise above the surface of the earth and move around the terrain. How exactly the tasks of lifting and movement will be solved, the source did not tell. Technical features of the new concept are not disclosed.

At the same time, he noted a special approach to operational issues. Despite the separation from the surface, the promising platform is not considered as a full-fledged aviation complex. A system of this kind would be expensive and would also require highly skilled personnel to maintain. The new concept provides for the creation of a simpler transport with reduced requirements. Ease of maintenance and maintainability are laid down at the level of technical requirements.

At the moment, the project is at the stage of developing a general concept, but work will continue. After 2025, it is planned to build and test a prototype. Perhaps by this time the Ministry of Defense or sources in the defense industry will be able to reveal certain features of both the basic concept and the real project based on it.

A TASS source spoke only about the existence of the project and some requirements for a promising platform. How exactly it is planned to solve the set technical tasks is not reported. Nevertheless, it is obvious on the basis of what schemes and architectures it is possible to create a vehicle with the desired capabilities. 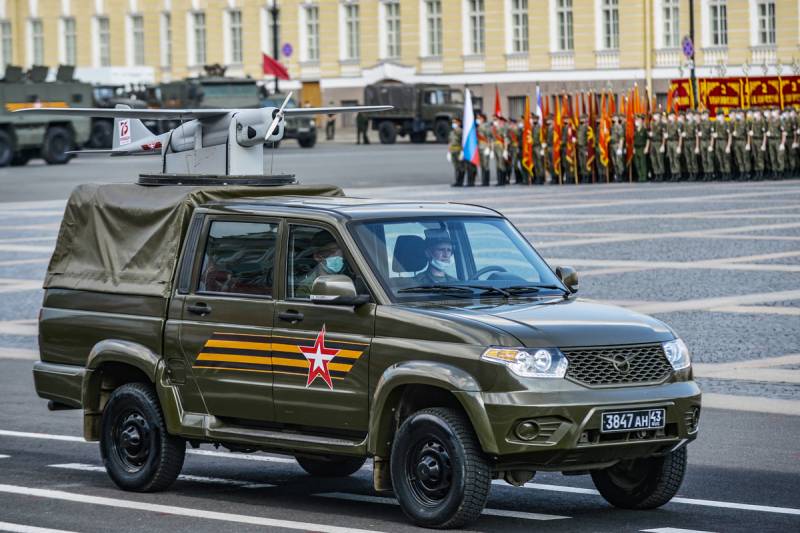 "UAZ Pickup" as a carrier of an unmanned complex
The new project provides for the creation of a land transport moving above the surface of the earth, but without contact with it and without direct support on it. It is on this principle that hovercraft work - a well-known and fairly common class of transport. In general, they are intended for movement over flat surfaces, but they are also capable of overcoming some obstacles.

It is possible to use another scheme. The over-relief platform can be a kind of multicopter - an aircraft with a suitable propulsion system and rotors. At the same time, the specifics of its application makes it possible to drastically limit the flight height, but it is necessary to ensure a high carrying capacity. Samples of such a scheme are already being created and tested abroad, and such a concept seems to have the right to life.

In the context of flights over the surface, ekranoplans should also be remembered. This technique has certain advantages, although it faces objective limitations. Due to the latter, its use in land logistics, incl. military is not possible.

Dimensions, weight, carrying capacity and capacity, as well as running / flight characteristics of the promising platform are unknown. An air cushion or a multi-rotor scheme allows you to create equipment of different dimensions with a wide range of performance characteristics. Obviously, the requirements for a specific model of military equipment will be determined taking into account the needs of the troops, technical capabilities and other factors. 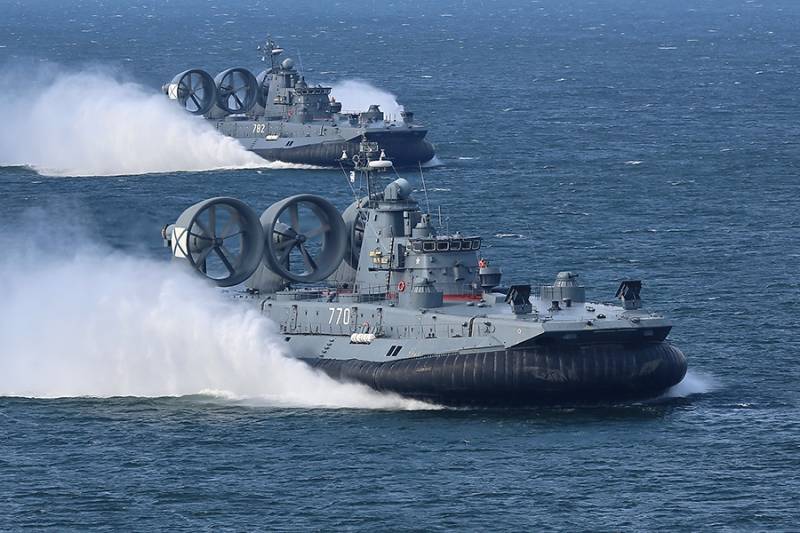 Landing hovercraft project 12322. This principle of movement can also be useful on land
It is possible to create light unmanned platforms for the transportation of small loads weighing no more than kilograms or tens of kilograms. Equipment of this kind will complement other vehicles and in a certain way expand the capabilities of the logistics system. Foreign experiments demonstrate the fundamental possibility of creating and effectively using such UAVs.

Also of interest may be medium-sized chauffeured/piloted vehicles capable of carrying people or comparable cargo. They will complement existing vehicles of various types. The appearance of heavy models replacing high-capacity trucks is unlikely.

Thus, our army plans to develop logistics and does not exclude the use of fundamentally new vehicles. This time it became known that in the future, some kind of over-relief platform may be included in the transportation system. What it will be is not yet known. But the reasons for the interest in such technology are understandable - even at the level of a general idea, it has certain advantages over traditional automotive technology.

The main advantage of the hypothetical overrelief platform is the virtual absence of restrictions on patency. Unlike a car, such transport does not depend on the state of the surface, its bearing capacity and terrain. It is possible to move at the required speed and load with virtually no restrictions, and in addition, the platform does not risk getting stuck on the road. High cross-country ability and mobility are also an additional factor in increasing survivability. 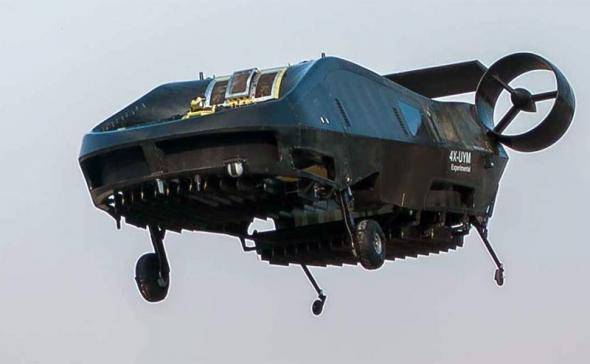 Israeli experimental transport UAV AirMule / Cormorant UAV
Transport of this kind can be used to provide transportation in areas with poor roads, in hard-to-reach areas, on the front line, etc. At the same time, in areas with a good road network, cars can still be used. In addition, vehicles of a traditional design and an over-relief platform should complement each other on the ground and solve common problems in different conditions.

However, with all its advantages, overrelief transport has disadvantages. First of all, this is a general technical complexity that affects production and operation. In addition, there may be additional technical risks associated with novelty. In this regard, hovercraft or multicopters are noticeably inferior to cars.

The army may need a large number of new equipment, which will ensure the performance of tasks in all anticipated conditions. Starting the production of platforms at the required pace will not be easy and not cheap. The task of mastering technology in the troops will also be quite difficult.

However, it is too early to talk about the results of the project. At the moment, it is at the stage of concept development, and the appearance of the first experimental sample is expected no earlier than 2025. The specialists of the 46th Central Research Institute have enough time to carry out all the necessary research and form the optimal appearance of the new vehicle. In addition, during this time, the Ministry of Defense will be able to decide whether it is worth developing such a concept, or whether it should be abandoned for objective reasons.

Regardless of the result of the current stage and further development of events, the concept of an over-relief platform is of some interest and can be useful. In the coming years, the relevant institute will evaluate these ideas, find ways to implement them and determine the required technologies. Even if the project does not progress beyond these stages, the necessary data will be collected and important experience will be gained for further developments.