How much is the union of Korea? 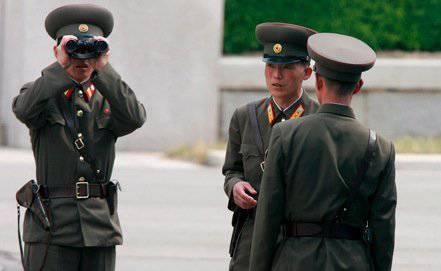 The confrontation of two forces on the territory of the Korean Peninsula this year marks 67 years. The beginning of the division was the defeat of Japan in World War II, as a result of which Soviet influence began to intensify on the Korean Peninsula. As befits the second pole of the geopolitical world, which (pole) in 1945 was the United States of America, Washington decided to also take part in the formation of a new political force in the region. As a result, the northern part of the Korean Peninsula became de-facto pro-Soviet, and a part of the south - pro-American. In 1953, a demarcation line appeared, dividing the peninsula into two states along the 38 parallel. Subsequently, it was in Korea (in addition to divided Germany) that the confrontation between the two ideologies was most clearly manifested. Moreover, if the German confrontation ended with the fall of the Berlin Wall, the confrontation of the two Koreas continues to this day.

Recently, the South Korean media published information that, it turns out, the South Korean authorities have repeatedly offered their colleagues from the DPRK to go for rapprochement. Such proposals were made in the framework of statements on the possible holding of bilateral summits. According to the statements of the former employee of the Presidential Administration of the Republic of Korea, the current President Lee Myung-bak 3 a year ago suggested Kim Jong-il to organize a Korean "mezhdusboychik", on which to try to develop a so-called road map for the rapprochement of states and peoples. The same ex-employee of the administration of the President of South Korea says that Kim Jong Il told Lee Myung-bak his “yes”, but at the same time demanded a “small” financial present in the form of 0,5 billion dollars. This amount was supposed, in the opinion of the DPRK authorities, to create a “favorable atmosphere” for negotiations.

But either the South Korean president suspected Kim Jong-il of trying to lead him to the brink of a corruption scandal, or Lee Myung-bak - the president was stingy at all, but the fact remains - no summit took place. Moreover, another round of political and military tensions between the two states began, the most acute point of which was the incident on Yonpkhedo, an island geographically belonging to South Korea. It was in November 2010. Then the South Korean troops decided to conduct exercises in the Yellow Sea, which is the controversial northern boundary line. North Korea warned its southern "partners" that it was not going to silently look at how the "enemy army" would plow in its territorial waters. In response, the South Koreans said that these waters are South Korean, and therefore Seoul will do whatever it wants in them. As a result, Pyongyang insulted utterly, said that during the exercises, Seoul launched a pair of shells into the territory of the DPRK. After that, the North Korean troops began, no less than a few, the shelling of the Yonpyeongo island, as a result of which two marines of South Korea were killed and several dozen were injured. South Koreans did not remain in debt and replied to Pyongyang with retaliatory shelling. The situation is at a standstill. Recall that for the friendship of the North Koreans asked "only" 500 million dollars. The word “all” was used because, as a result, both countries lost only one third of this sum during the conflict on Yonpkhedo (plus its consequences) ...

At the dead end, she remained even after Kim Jong-un ascended to the presidency in the DPRK. Initially, Seoul (and not only Seoul) thought that the new Kim was much more loyal to capitalist ideals than his father, but Kim the Third quickly dispelled all hopes of the South Korean authorities, stating that if the South will continue to lead “unfriendly policy toward the DPRK’s socialist conquests, then a nuclear strike will be dealt to Seoul. From such statements in South Korea came in a state of shock, from which for a long time could not get out.

However, today South Korean political analysts say that the situation in terms of the rapprochement of the DPRK and the Republic of Korea may get off the ground after the presidential elections in the South. If a more pragmatic leader is at the head of a country, he can take advantage of Kim Jong-un's weaknesses. And many people know about the weaknesses of this politician today. This weakness is associated with material well-being. Obviously, if the South Koreans talk about the summit again, Pyongyang will take advantage of the opportunity to receive financial preferences from them. But in the end, for South Korea to pay those same 500 million dollars is not such a heavy burden. Russia for 10 billion forgives - and nothing ...

But South Koreans, perhaps, would be glad to pay their forfeits to their northern brothers, but they only fear that they will not limit themselves to one-time demands. Well, what else did Seoul want? .. North Korea is a poor bride, but muscular. If the bridegroom (South Korea) does not give expensive gifts, it may even hurt ... It’s possible to call this North Korean blackmail, but blackmail is within the same family. Together with our Slav brothers, we also often butt, but then we understand that it is better to release gas with oil cheaper than to receive next sticks of unfriendly. No, for us, of course, no one from the neighboring states shoots artillery shells and does not threaten with a nuclear strike in words, but in our case there are problems.

It turns out that Seoul is still more likely to attract the North into its arms. Yes - you have to fork out, but you can call it promising financial investments. Of course, it cannot be assumed that the North Koreans will rush towards the southerners for the promises of multimillion-dollar assistance, but it all depends on how to present such assistance ...

If you put aside ambitions and switch to a language that is understandable to each other, you can attract even experienced socialists with experienced capitalists to friendship. And if Germany on mentality, as we found out, cannot be cited as an example, then China is quite possible. We learned how to find a symbiosis from the integration of socialist ideas with market laws. Are the Koreans ready to go for it? - The question is difficult ... However, in the matter of rapprochement between the two Koreas today, there are far more supporters of this process than opponents around the world. Of course, if the next “stronghold of the axis of evil” disappears from the map, then the Pentagon will find it much harder to beat out money to protect the planet from the “North Korean threat”, but from the point of view of economic prospects, even for the US, you can find a sufficient number of advantages.

Speaking of the Korean split, we can say that today the situation resembles a chronic sore, which everyone seems to have gotten used to, but which still spoils the view, starting to itch at the wrong time. Will there be enough strength and imagination to solve more than half a century of problems - it will be clear after the presidential elections in South Korea.