November 1, 2012
100
Modern laws say that if a particular country has a genuine interest in the United States of America, how can it “unexpectedly” lead terrorists of various stripes. In this case, the “terrorist issue” Washington often uses in order to strengthen its military presence in a particular region. If such a law takes place, it becomes clear the reason for the serious activation of the Islamists in Kyrgyzstan. 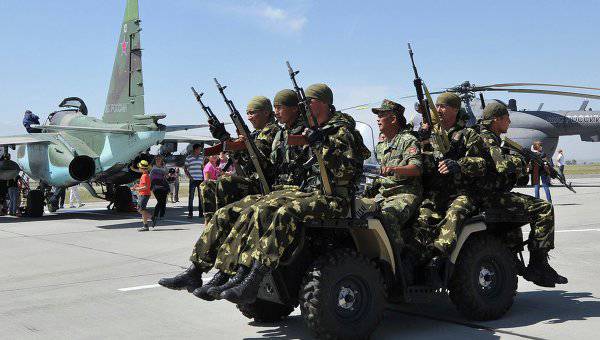 Kyrgyz media reported that in the Chui Oblast and the capital of the republic, anti-terrorist units took part in a whole series of operations whose main purpose was to identify gangs. Operations, it must be admitted, have been crowned with success. According to their results, terrorist acts that were planned on the territory of Kyrgyzstan were prevented.

The press service of the State Committee for National Security of the country reports that in Kyrgyzstan the security forces detained a group of five people. In the apartments in which the detainees lived, the investigators found a whole arsenal weapons: improvised explosive devices, hand grenades, firearms, thousands of bullets. In addition to this, the apartments were littered with extremist literature, which in the last few months literally flooded the cities of Kyrgyzstan, especially Bishkek and Osh.

After the first interrogations, the detainees announced that the arsenal of weapons and explosives was to be used for conducting terrorist attacks against state institutions and law enforcement agencies of the republic. At the same time, after analyzing the printed materials of an extremist nature, it turned out that the overwhelming percentage of this specific literature, calling on Kyrgyz citizens to fight the state and government officials, was most likely made in one of the countries of the Arabian Peninsula. It turns out that the detained terrorists were only pawns in a big game, behind which there are much more impressive forces. This means that in the territory of Kyrgyzstan five detainees are not the only terrorist group that is ready to destabilize the situation. And because the threads of control over the situation from the hands of the security forces can not be released.

But if so, then why the seemingly calming quite recently situation in Kyrgyzstan again began to boil down to an alarming option? After all, if it were not for the concerted actions of the Kyrgyz security officials, a series of terrorist attacks would have been inevitable, which would have led to new unrest in this Central Asian country. But Kyrgyzstan, perhaps, knows better than its neighbors what a series of mass unrest, as a result of which political leaders are shifting, and which lead to a new disorder and political chaos.

On this occasion, the following opinion. The unexpected activation of the terrorist underground in Kyrgyzstan is due to the fact that the current president Atambayev stubbornly declares that in 2014, the last American will have to leave the base in Manas. The Kyrgyz president connects this with the fact that US troops will leave Afghanistan in 2014 year (at least, the current US President Barack Obama speaks about it), and therefore the Manas base, according to the Kyrgyz political leader, the US will no longer need . Well - everything is quite logical. However, Americans are not impressed by such statements by Atambayev. After all, the loss of one of the key outposts in Central Asia is clearly not part of Washington’s plans. And if not included, then the American creatives are ready to offer a new scenario of how to keep their base in Kyrgyzstan intact.

The situation with the terrorist threat is an old and proven move. It is obvious that now in different parts of Kyrgyzstan terrorist activity can be manifested, which is born not without the help of one of the main world “democratizers”. The task of the Washington creatives is to make Alambek Atambaev understand the “whole danger” of the situation. They say, look, Mr. Atambayev, how terrorists and extremists breed in your country, and you still want to say “Goodbye!” To the American base. Is that what the leaders of small republics do ... In this case, you can lose your presidential chair, this happened with previous Kyrgyz leaders against the background of new movements of the democratizing machine.

Obviously, Atambayev himself understands the seriousness of the situation. This situation is now more or less under control, because the United States is occupied with its own political problems. But as soon as the American people make their “choice,” a new series of the film about the main world “protector” will begin, looking to protect from such epic monsters as Al Qaeda, Taliban and others generated by the USA itself. And Kyrgyzstan, in this case, is a target that may well become one of the main ones in the region. Still would! After all, the presence of a powerful American base in this country will allow NATO to monitor the situation of the frontiers of its main geopolitical "partners" - Russia and China at the same time.

By the way, in this regard, the recent inspection by NATO troops looks very noteworthy. aviation CSTO bases in Kyrgyz Kant. Representatives of Canada, the Czech Republic and Estonia arrived at the base. Arrivals reported that they are doing work under the Vienna Agreement on Building Confidence and Security for the OSCE. According to this agreement, processes of mutual control in the military and military-technical sphere should be held between the countries included in the OSCE.

The Estonian, Canadian and Czech military personnel with great zeal began to inspect the CSTO base, identifying its exact personnel and what status the military personnel in Kant (contract soldiers or conscripts) have. They were interested in the types of equipment in use and the percentage of Kyrgyz-made equipment. The “inspectors” decided to find out even if the rest was not dangerous for the Russian soldiers in Kyrgyzstan, because the state of the radiation background on the Kyrgyz lake Issyk-Kul, according to NATO representatives, is a matter of concern. In other words, Lieutenant Colonel Yakovlev (acting base commander) was hinted that the very presence of the Russian military in Kyrgyzstan was unsafe - they say, radiation and so on ...

True, the command of the base of the CSTO, if we speak frankly, could send guests back home, and not conduct heart-to-heart talks with them, for the Vienna agreements concern individual countries that are members of the OSCE, but not military blocs. And the inspection commission was sent by order of the NATO leadership, which in itself does not correspond to the letter of the agreements reached in 1990. Moreover, the objects were not inspected at all of a specific state (Russia), but also of a block - the CSTO ...

Such a move clearly indicates that the West has a genuine interest in Kyrgyzstan, and in the near future it will be more carefully implemented. If so, then it’s time to find counter-arguments so that Kyrgyzstan does not become a territory from which they want to make another springboard for solving their “democratic” narrowly focused interests.

And it seems that such counter-arguments are beginning to manifest to some extent. In particular, according to the MK-Asia publication, the CSTO military base may appear in the Kyrgyz city of Osh. If this information is confirmed, the base can play a serious role in stabilizing the situation in the republic. With the presence of the CSTO military base (CRRF), the desire of external forces to use the southern regions of the country, and Kyrgyzstan as a whole, as a new focus of terrorist activity in the region, will be less apparent. Moreover, official Bishkek in this case can already plainly declare to Washington that it does not need the services of the American army after 2014, because it is in the Collective Security Treaty Organization, and is able to cope with any terrorist threat from both outside and inside. (although internal terrorism without external support in the modern world is difficult to imagine).

The presence of the Osh base will make it possible to establish cooperation with the 201 base of the Russian army located in the territory of Tajikistan, and the 201 base itself will not be a distant enclave. Moreover, the presence of the KSOR base in Osh is an excellent deterrent to the flow of weapons that can flood the river into Central Asia after the possible withdrawal of American troops from Afghanistan.
If a military base in Osh really appears, then the recently written off debt of Kyrgyzstan from Russia will be more than justified. Protection of the southern borders in the current geopolitical situation is a very serious matter.

In general, the big battle for Central Asia is just beginning ...