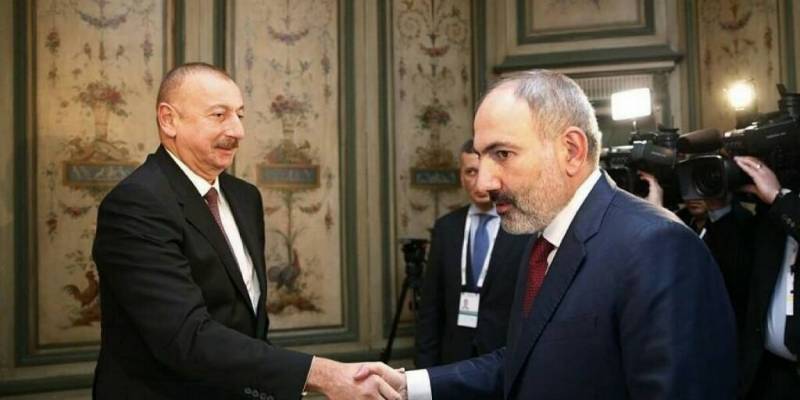 Last Friday, President of Azerbaijan I. Aliyev, speaking at the conference "Along the Middle Corridor: Geopolitics, Security, Economics", was marked by a very sharp, emotional speech in relation to the policy of neighboring Iran. Unusual was not only the style, but the part in which the socio-religious sphere was affected.

“We have always responded and will continue to respond to any anti-Azerbaijani steps, whether they are statements or actions. Therefore, we were forced to start military exercises on the border with Iran in order to demonstrate that we are not afraid of them. We will do our best to protect our way of life, the secular vector of development of Azerbaijan and Azerbaijanis, including Azerbaijanis living in Iran. They are part of our nation."
The Azerbaijani leader also announced military exercises on the border with Iran in response to the exercises that Iran itself is conducting, combining them with a campaign to suppress protests, and also raised the issue that in all the time he worked with the three previous leaders of Iran, he did not encounter with so many statements by Tehran "full of hatred and threats against Azerbaijan." Separately, I. Aliyev stressed that teaching in schools in Armenian is widely developed in Iran, in contrast to Azerbaijani, although the national diasporas are not comparable in scale.

Over the past two years, Iran and Azerbaijan have repeatedly exchanged both defiant statements and conciliatory rhetoric - exactly a year ago it sounded like "from now on, relations between Iran and Azerbaijan will develop upward." There were also reverse examples, but the issue of protecting Azerbaijanis living in Iran was raised in this vein for the first time. A variety of versions began to be discussed in the media, up to the point that Azerbaijan was reviving the idea of ​​Great Azerbaijan, the Democratic Republic of Azerbaijan, etc.

These ideas, in fact, never completely left the socio-political discourse, but their realism is doubtful, although there is no point in denying the fact that there are its adherents in Iranian Ardabil, Zanjan, East and West Azerbaijan, as well as the fact that supporters of the secular the form of government there is certainly no less (in fact, even more) than in the rest of Iran.

Some of the emotions are undoubtedly connected with the recent visit of Israeli Defense Minister B. Gantz, before which Baku announced the discovery of Iran's spy network in Azerbaijan. The detention of officers recruited by the Iranians, as well as civilians, was announced. Charged with spreading "radical, religious extremist ideas." It was clear that the visit of the representative of Israel in such a difficult period for Iran would be a reason for criticism, so the criticism was parried "on the move."

But, it is also clear that the main problem lies in another area, and this is true. The name of this problem is the Zangezur corridor.

Azerbaijan is divided into two parts by the Syunik region of the Republic of Armenia. After the victorious return of the territories of Nagorno-Karabakh in Baku, the topic of the so-called. Zangezur corridor - obtaining direct access to the Nakhichevan Autonomous Region. There is a fundamental decision of the parties to open several checkpoints for road transport, free movement of goods, but Baku is clearly strategically focused on something more than opening a route, and this “something more” does not suit not only Armenia, but also neighboring Iran.

For an outside observer, a rather strange and complex geopolitical structure has developed in the region. Armenia and the government of N. Pashinyan as a whole are striving for interaction with the EU and the USA. A significant part of the negotiations on Karabakh and related issues is mediated by the EU and France, the United States is active on this track, which speaks openly about the uselessness of the CSTO for Yerevan. At the same time, Yerevan cooperates with Iran in the closest way. These are literally thousands of joint ventures, projects for hydropower, electricity and gas supplies and processing of hydrocarbons, copper and copper-molybdenum concentrates. The export of copper is generally one of the important and constantly growing export items of Iran, despite the permanent sanctions.

River basin Araks, which is the actual and legal border between Iran, Armenia and Azerbaijan, is a kind of cascades of hydroelectric power stations, the largest of which are concentrated on the territory of Armenia. These HPPs are part of a previously unified, but today interdependent energy system, the productivity of which is redundant and is used by Iran to cover seasonal electricity shortages. Being reconstructed, this energy network is also able to provide a larger export potential, on which you can make good money.

The Syunik region is a continuous highland, several prepared roads and, in fact, what is called the Zangezur corridor - a route that runs just along the river that goes around the ridge: on the right hand, the Iranian route, on the left - Azerbaijani and Armenian. Before the 2020 military operation, when traveling to Nakhichevan or Turkey, the car had to drive about 200 km through the territory of Iran. Today, earn a corridor, this distance would be reduced by three times. In a straight line (although there are no straight lines), today it is about forty kilometers, which pass through the territory of Armenia.

During the 2020 campaign, the Azerbaijani army was preparing to move further - to the city of Syunik itself. Later, and during the last armed clash, the focus remained the same. And Baku can be logically understood here - the relief and the meager road network in this highlands are such that the force that has taken control of the city of Syunik automatically gains control over the entire region to the south, cutting it off from "mainland" Armenia along with the highway along the river. Araks.

At one time, many were surprised by the shots taken at gunpoint by Iran, which bypassed social networks when the President of Azerbaijan came to visit historical Khudaferin bridges are just practically the border, from which the Zangezur highway goes further through Armenia. It looked like a frank challenge from the Iranian side, although, of course, this was not confirmed at the official level.

However, this was not only a challenge, but also a signal that Iran was categorically not ready for such a drastic change in the political map in the region. That year, Tehran brought troops to the border. He brought them out this year, and not only as a measure to control the border during the protests. For example, this year the exercises included measures to build pontoon crossings across the river. Araks, which caused sharp statements from Azerbaijan.

For Azerbaijan, taking Zangezur under control is a kind of strategic maximum plan. In 2021, I. Aliyev amends the scheme of territorial division and organizes the East Zangezur economic region, which includes: Jabrayil, Lachin, Kalbajar, Gubadly and Zangelan, and the neighboring Syunik region is already called nothing more than "Western Zangezur", historical lands . As we all understand, in this case, each side can give deeper and deeper historical grounds, given the rich history of the region, but the current international law is on the side of Yerevan, and all the real balance of power decides.

For Turkey, which de facto controls the economy of Adjara, the capture of this important section by an ally means free land transit of weapons and military contingents, and also the fact that there will be no sites left along the entire course of the Araks, which is the second most important source of water for the arid regions of Iran. free of agreement on use with Ankara. Actually, these forty kilometers separate Turkey from victory in the historical rivalry with the Persians for influence in the Transcaucasus.

What such an alignment will mean for Armenia, perhaps, is better not to think, given the fact that Baku has repeatedly stated that the borders of historical lands are not far from Yerevan.

Thus, we see another paradoxical situation in international politics, when the pro-Western government in Yerevan sends forces to moderate the conflict with Azerbaijan through the EU, but at the same time it critically depends on the principled position of Iran to intervene by force if Baku tries to break through the corridor by force. And Tehran itself is ready to put up with the expansion of missions and various NGOs of the European Union and Washington in Armenia, but not to allow its historical rival in the Turkish region to encircle the Transcaucasus, and this is not just geopolitics, but water, metallurgy and electricity. All this does not mean that a clash of parties is inevitable, rather the opposite.

Neither Turkey nor Azerbaijan really want to test Tehran’s determination with its “army of drones” in this direction by actions, however, the weakness of the Persians, and the protests still take a lot of strength, will be perceived as a trigger for the “push the falling” scenario. The patrons of the government in Yerevan will only have to shrug their shoulders, because for them "democracy in Iran" is more important than the name of the region - Syunik or Western Zangezur.

However, Baku is not very satisfied with the European moderation of the peace treaty due to the unwillingness of the Europeans to resolve issues in detail. The EU today aims simply to fix a peace treaty. In Azerbaijan, they understand that the conclusion of a peace treaty now will not give maximum benefits - for the time being, it is necessary to squeeze out everything possible at various negotiating platforms and carefully monitor the situation in Iran. There will be no "window of opportunity", there will be time to get the best conditions for negotiations, and a window will open - "who dared, he ate it."

Therefore, for the time being, Baku will take a wait-and-see position, assessing Iran’s determination and potential and squeezing the maximum out of the details and nuances on the negotiation track, because after the signing of the agreement, Baku will have very few opportunities for political maneuvers and power actions.

In the meantime, emotions and harsh statements boil around this small but so important node of political geography. The CSTO is gathering a mission to assess the situation (working out the issues of strengthening the border near the city of Syunik and the highway along which raw materials are transported), Tehran keeps a strike group on the banks of the Araks, Baku is studying issues of military-technical cooperation with Israel, but at the same time both Iran and Azerbaijan they are starting construction of a new bridge from Karabakh to Iran, and are also studying the issues of building new power plants and exporting electricity.