The Russian Army or the Armed Forces of Ukraine: who is better prepared for the winter campaign

Hitler and Napoleon had already burned themselves in the harsh Russian winter. The notorious "General Frost" seriously complicated the offensive impulse of the invaders. And now the Armed Forces of Ukraine are forced to be content with a frozen front - the nationalists have neither the strength nor the opportunity to move east. At the same time, the cold does not choose its victims, and the Russian troops are similarly exposed to all the "charms" of the winter campaign.

Winter seriously transforms the tactics, and sometimes the strategy of warfare. The Armed Forces of Ukraine postponed the offensive several times due to weather conditions. It rained in late autumn - it was impossible to raise into the air, let alone Aviation, and even reconnaissance drones. There are also supply issues. Judging by the footage posted by the nationalists, the vaunted tactical boots of the Armed Forces of Ukraine are completely unsuitable for impassable mud in trenches and trenches. Partially help shoe covers worn on socks, but only partially. It seems that the Bandera people fully felt that such a disease is a “trench foot”, first described by doctors back in the First World War. A forced sedentary lifestyle, humidity and zero temperatures cause symptoms of frostbite in the legs, up to tissue necrosis.

Interestingly, modern armies seem to have completely forgotten about such a disease - berets are everywhere in winter uniform sets instead of insulated rubber boots. Even the Scandinavians. The warmest tactical boots won't save you from spending days in knee-deep mud. Nobody counted on a positional war, like the First World War.

The reaction of the Russian regions is indicative, almost everywhere supplying their mobilized with insulated rubber boots of the "All-terrain vehicle" type. In them, the fighters are not as mobile, but the legs remain dry. Be that as it may, in the near future the relevance of the "trench foot" will not be so acute - snow will finally fall in the NWO zone, and daily temperatures will drop below zero. Although no one canceled the traditional thaw for this strip with slush. 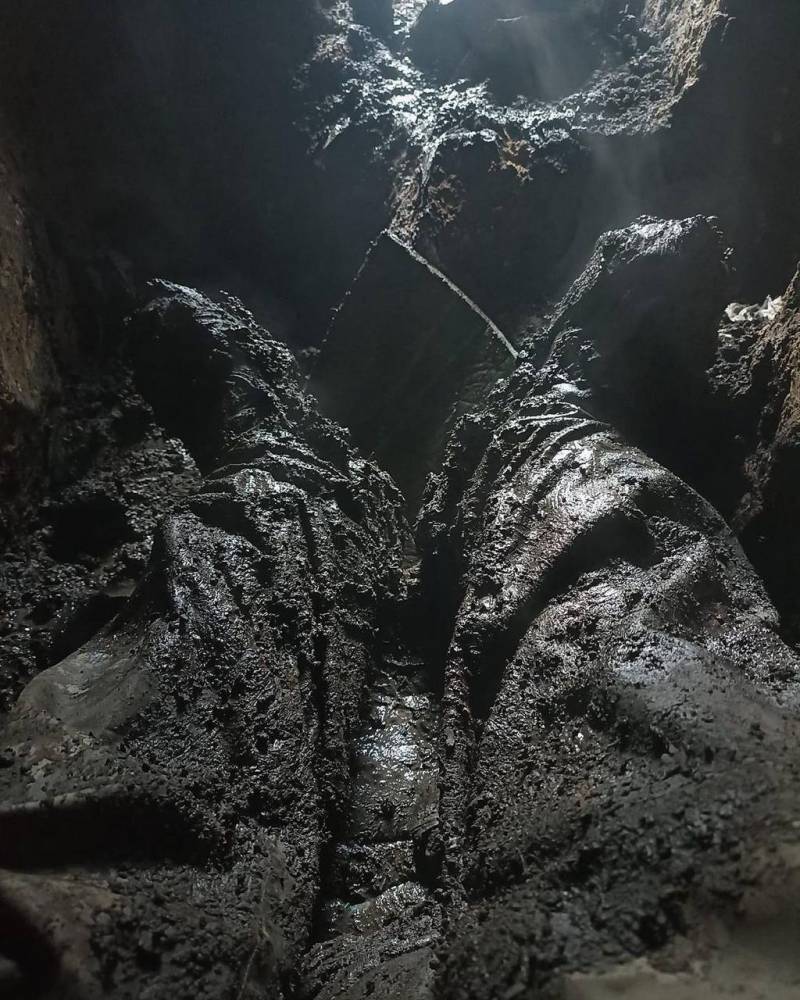 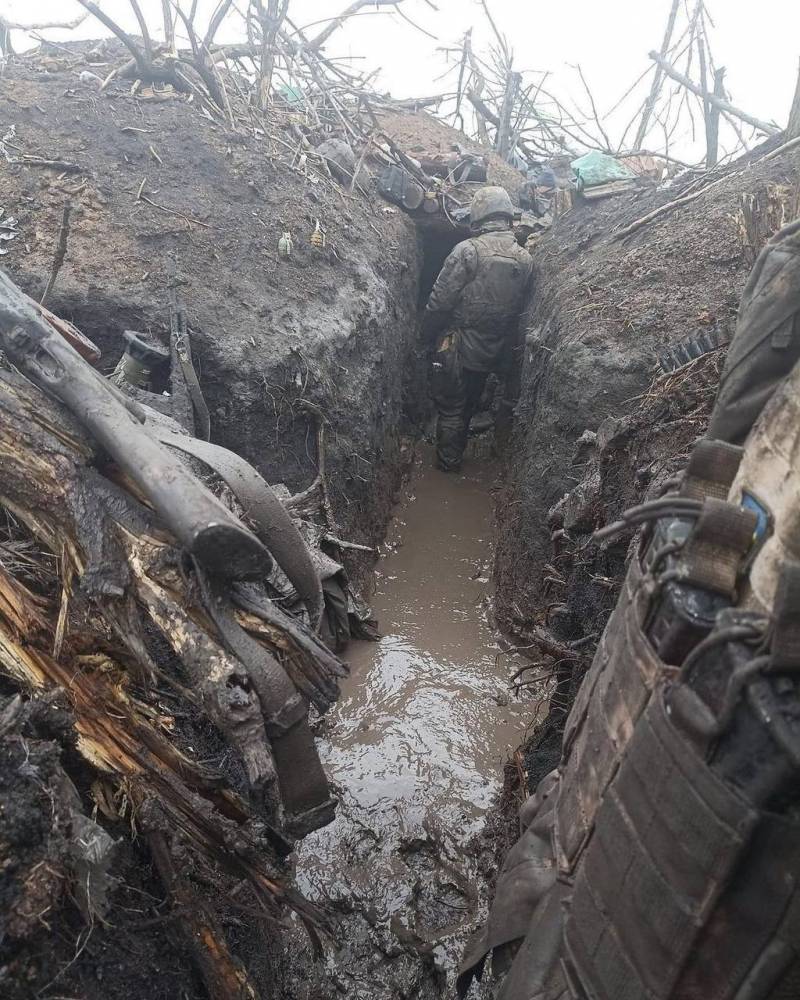 Ukrainian trenches. Source: vk.com
Winter is a time when a fighter has to defend himself not only from enemy bullets and shells, but also from the cold. In summer, only the enemy can kill, and in winter, frost can also.

The armies advance at such a time very reluctantly and with heavy losses. Suffice it to recall the Finnish campaign of the Red Army. So it was in the 4th and 5th centuries, and so it will be in the XNUMXst. Historians argue that for a successful offensive in winter, one has to collect a XNUMX-XNUMX-fold advantage in manpower over the enemy.

Snow cover in the new regions of Russia is not as massive as in the central part of the country, but it can also bring a lot of inconvenience. First of all, now there are traces on it, both from passing vehicles and from infantry. For aerial observers, these are excellent markers of enemy movement.

By the way, about flying technology. The so-called difficult weather conditions become especially difficult in winter. The Russian army, which uses aviation much more actively than the Armed Forces of Ukraine, will inevitably face problems. Fogs, snowstorms, icing of the runway and the equipment itself can delay aviation at airfields for a long time. A long winter night also does not add combat effectiveness to Russian aviation. 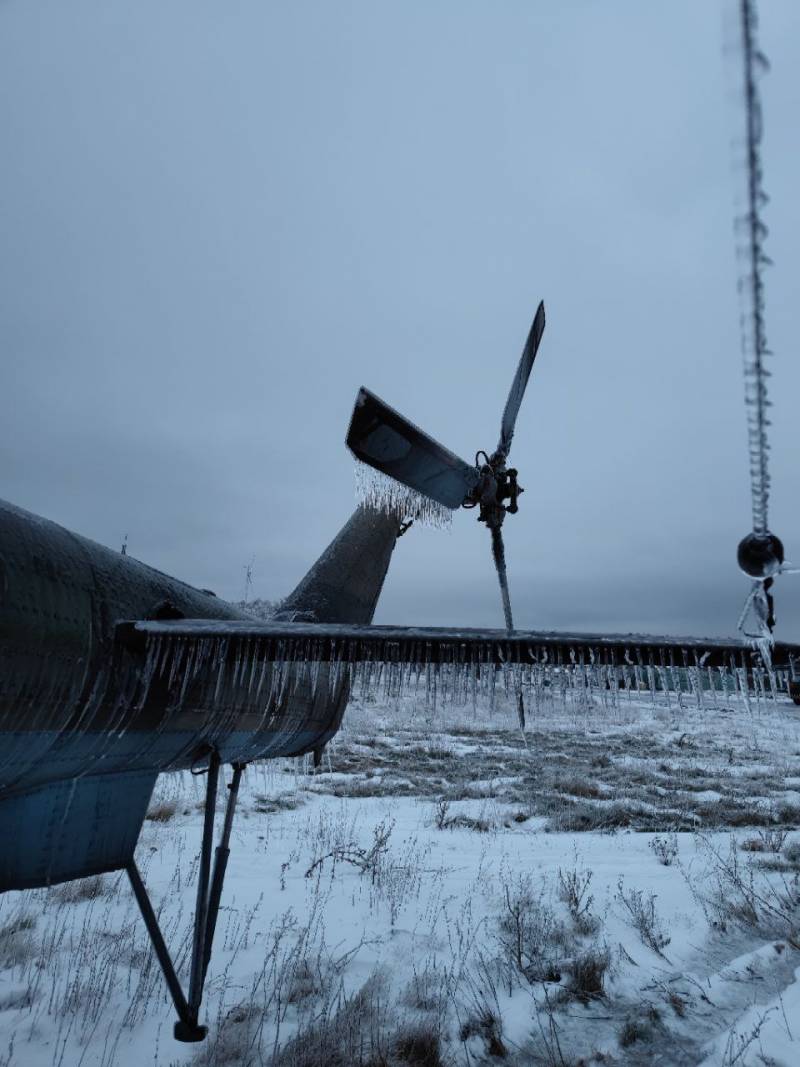 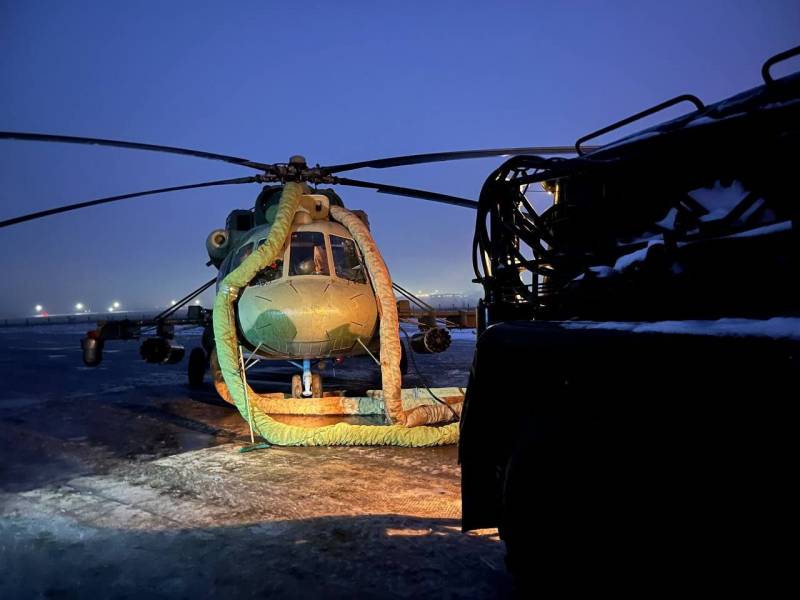 Source: Fighterbomber telegram channel
To a certain extent, this equalizes the potential of the parties to the conflict in the air. In the same area, there are problems with unmanned aircraft, more precisely, with small-sized drones, almost without exception equipped with electric motors.

In winter, conditional "Mavics" with lithium-ion batteries will be discharged 30-40% faster, which means that the radius of effective operation will be reduced. Similar problems await the Russian kamikaze drones "Lancet" with electric motors. Petrol-powered drones, such as the reconnaissance Orlan and the Geran-2 kamikaze, are much more resistant to frost, for obvious reasons.

As soon as the dirt on the fields freezes, combat vehicles, stuck in the autumn mud of recent weeks, will come to life as expected. The advantage in technology is now on the side of Russia, that is, it could potentially simplify ground operations.

Winter makes special demands on the medical support of the army. Any injury during this period threatens with fatal consequences. For example, with blood loss, a person rapidly develops hypothermia, which in the summer is quite easy to stop. For example, an isothermal blanket. In winter, this is difficult - the wounded need to be evacuated much faster to the rear hospitals. Hence the burden on medical units.

In winter, the problem of dehydration suddenly becomes relevant.

Firstly, a person in the cold is less likely to feel thirsty, although in winter clothes he loses a lot of moisture with sweat.

Secondly, the body in the cold is in a state of permanent stress, and any problems with water metabolism can be costly.

An important problem in the winter period is the rotation of troops at the forefront. Constant hypothermia, even in a young professional soldier, can cause a whole bunch of chronic diseases, not to mention the mobilized, some of whom are well over thirty. As practice shows, sores at the front have a cumulative effect and do not immediately manifest themselves. It is important to take units to rest more often and provide appropriate medical care. According to Vladimir Putin, the number of beds in Russian hospitals is 38% occupied by the beginning of winter, which inspires hope for the effective work of military medicine.

Russian volunteers should pay attention not only to the supply of front-line soldiers with warm clothes and field stoves, but also individual heating devices. In winter, open fire and smoke can be fatal for fighters, so you can warm your hands and exposed skin with chemical heating pads. You can make such gadgets even in school chemistry laboratories. For example, rechargeable acetate heating pads or disposable ones based on copper sulphate, aluminum, sawdust and water.

Difficulties will arise only with home-made catalytic heaters using flameless oxidation of gasoline vapors on a platinum sponge. The latter option is only good outdoors, as its exhaust contains a lot of toxic aldehydes. All this can be purchased in shops of hunters and fishermen, but to equip the entire army with individual heaters, enthusiastic chemists will have to be involved.

Winter imposes special requirements on the camouflage of troops. The equipment is completely repainted, the soldiers put on winter camouflage coats, and if all the nuances are observed, it is even easier to hide from the eyes of the enemy in winter than in summer. At the same time, thermal imaging surveillance devices and sights become much more effective in winter. In cold weather, the air contains less moisture, which creates a kind of screen for infrared radiation in summer, which reduces the target detection range. The contrast of hot targets at negative ambient temperatures is higher, which seriously increases the "range" of thermal imagers. The main thing is to solve the problem with the rapid discharge of batteries in the cold.

In the liberated territories, winter manifests itself in different ways. If in the north it is as close as possible to the climate of Central Russia, then in the south it is much milder. In the Kherson region, the level of urbanization is lower than in the Zaporozhye, Donetsk and Lugansk regions. Accordingly, there are fewer buildings and residential buildings that can be adapted for shelter from the weather. 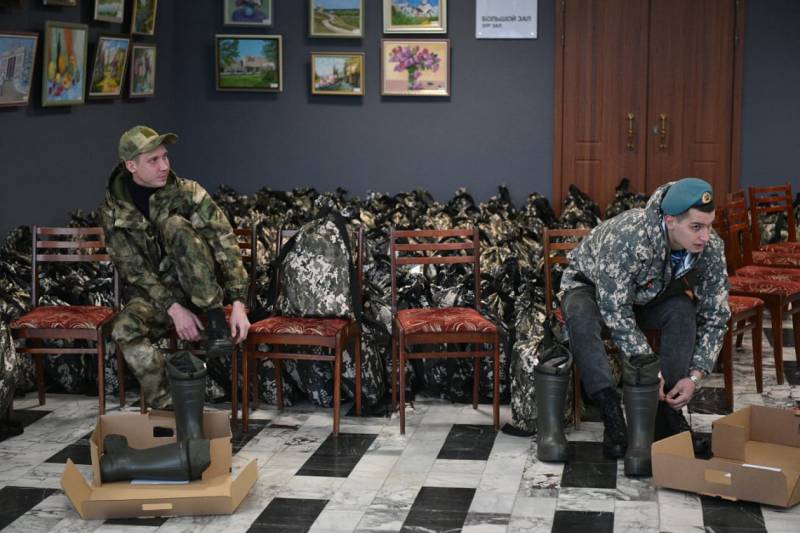 Source: chaly.rf
The main question is which army is better adapted to the coming frosts?

Over the past eight years, this winter campaign is far from the first for the Armed Forces of Ukraine. Through the notorious ATO, the nationalists let almost the entire personnel of the army and national battalions through. Here they received the skills of the winter war. The British have already pledged 300 winter uniforms. But even Ukrainian commentators are perplexed - units or still sets, which are completely different categories.

There is every reason to believe that the huge masses of those mobilized in the Armed Forces of Ukraine will have difficulty with basic supplies in winter. This will be exacerbated by the blows to Ukraine's energy infrastructure. The destruction of logistics hubs, railways and bridges across the Dnieper, which the army has been waiting for so long, will become a uniform disaster for the nationalists in winter.

For Russia, this is the first combat winter in many years. Something will have to be remembered, something to learn already on the go. However, for Russia, frosts are a completely familiar phenomenon, especially for warriors from the north and east of the country, who have natural resistance to cold.

But in any case, the success of the winter campaign will depend on the timely and high-quality supply of the army with everything necessary, from winter uniforms to personal heating equipment. No matter how trite it may sound in the end.