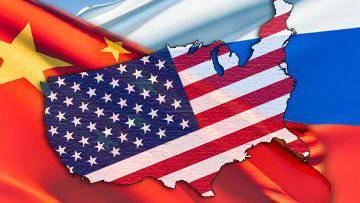 The Guardian Browser Sheymas Milne считаетThat the first news about the end of the so-called New World Order came in 2008 year. “In August,” writes a progressive British journalist, “a US Georgia client was crushed in a brief but bloody war after her army was attacked by Russian troops in the disputed territory of South Ossetia.”

The fighting ended, and George W. Bush warned Russia: they should not, they say, recognize South Ossetia. But Russia recognized.

Here the author of the article sees the first turning point of the geopolitical level. Moreover, the independent decision of Russia was made against the background of the eroded military domination of America (what is being said is clear: Iraq and Afghanistan). “After two decades, during which the United States hung over the world like a colossus,” Milne says, “the years of unchallenged US power were over.”

The second event, which marked the impending change in the world order, dates back to 15 September. On this day, the entire US financial system was shaken: the fourth largest investment bank, Lehman Brothers, went bankrupt. Milne finds that the Western world is facing the deepest, counting from the 1930-s economic crisis.

The world led by the United States, "proclaimed" by George Bush Sr. in 1990, subordinated to Western capitalist standards and almost free from socialism, suddenly cracked. (Fukuyama sat down to write his idealistic book "The End stories“We’ll add from ourselves where it predicted that human history ends in an American-style democracy - because there’s nowhere to go, all countries of the world, one after the other, are democratized).

“But between the attacks on the twin towers and the collapse of Lehman,” writes S. Milne, “this world order collapsed. Two factors were decisive. By the end of the decade of protracted wars, the United States achieved success in discovering limits, rather than the degree of influence of its armed forces. And the neoliberal capitalist model, which reigned for a whole generation, cracked at the seams. ” And just the reaction of the United States to the attacks of 9 / 11 and broke the feeling of invincibility of the first "global empire" in the world.

The journalist writes: "The wildly overvalued response of the Bush administration turned the attacks in New York and Washington into the most successful terrorist attack in history." The Global Behemoth was unable to impose its will on either Iraq or Afghanistan. Both invasions were the undisputed strategic defeat of the United States.

As for the economy, the “model of insatiable capitalism,” implemented by corporations “by increasing inequality and environmental degradation,” has also been discredited. From the collapse of her saved large-scale state intervention.

Following the rise of the People's Republic of China, the fourth global change was born in Latin America. “Throughout the continent,” writes the British journalist, “socialist and social democratic governments have advanced to power, which have aimed at economic and racial injustice, the creation of regional independence and the return of resources from corporate hands. Two decades after we were assured that there could be no alternatives for neoliberal capitalism, Latin Americans were able to create them. ”

Ideology is not created from scratch. Being determines consciousness. All system alternatives, from Soviet to Thatcher-Reagan neoliberalism, have grown out of specific historical circumstances, the author notes. And now, due to the consequences of the neoliberal crisis, the need has arisen to reconstruct the economy into a more democratic, egalitarian and rational channel. It is here that the journalist sees the form for a new viable alternative.

Brad Franklin, a resident of Vancouver, a former political reporter, TV host and federal government employee in Canada, and now a permanent columnist for China.org.cn, prompts to the American ideologues that new form of peaceful and mutually beneficial existence of states, to which Comrade Milne got in his article. (Actually, Milne is right - this form has already been defined historically. It’s another thing that America that has lost weight continues to wear fat man’s clothes ...)

Despite the economic downturn, the journalist writes, the United States can still claim to be the richest and most powerful country in the world. However, the attention of all is now focused on how things will go further - after the world economy recovers. Many Americans believe that everything will go the way it was before: America will again be the world leader, and the new “global hero”, that is, China, will be pushed back somewhere below second place.

But those who can think see a new order in the world. If they drive on the roads "Fords" and "Chevrolet", so the Chinese production. The essence of this, and more precisely, in international cooperation.

If before the classics of geopolitics and the world economy was the attitude of the parties according to the principle “I win, you lose” (which, by the way, was prevalent primarily among Americans), now this “game” is not the best way to move forward, especially if someone one started to confront all other players.

Singaporean analyst Simon Tay, referred to by Franklin, believes that instead of fierce competition between the US and the PRC (as well as other Asian countries), we should move to a partnership. They must allow the interconnection of their economies. He postulates that in this scenario, each of the former superpowers plays the role of a regional leader, but at the same time establishes a new balance in which America treats Asia just as a partner, and not as a competitor who needs to be defeated in the market. Simon Tay argues that, acting together, states can be stronger than they would be, acting separately. In addition, a strategic partnership would lead them to a win-win position in the world.

However, does the superpowers have the political will to accept a new historical version of development? Franklin, who has been a political observer for many years, doubts that the government of America is prepared to admit this. And the “adventures” of the United States in Iraq and Afghanistan, alas, reflect the position of America, according to which other countries should behave in accordance with the “American values”.

As for China, it pays more attention to solving its own internal problems and prefers not to interfere in the affairs of sovereign states.

Therefore, the journalist suggests that the idea of ​​cooperation and partnership would be much more easily accepted in China than in America. However, Franklin notes, “after all, America cannot have much choice in this matter.” Economic and geopolitical relations, when everyone on the planet obeys someone under the number 1, ended, the author writes. Let's hope that a partnership with the unipolar world will replace the journalist, concludes.

From Western Journalism didn't slip away and the factthat while the American authorities are still trying to implement the doctrine of the “global government”, Russian President Vladimir Putin presented a vision of the world that goes against the so-called “new world order”.

The Eurasian project, outlined a year ago in the article by Russian Prime Minister Putin “A New Integration Project for Eurasia: The Future is in Creation” (Izvestia, October 3, 2011), is both a threat to the New World Order and an alternative to it.

The reaction of the Western media to the integration project was unanimously negative. The allergy of the West to Putin’s plan is explicable, but this project of Eurasian integration has grown out of the post-Soviet geopolitical and cultural space and is consonant with current global trends.

The fact is, the journalist believes that most of humanity realizes that the “new world order” is demonic power. After all, this is the path to the establishment of unification and despotism on a planetary scale.

Putin’s hostility toward a “new world order” headed by the United States is the main reason why Russia is considered dangerous for the financial “world masters”. Meanwhile, the author believes that political salvation through global governance is an absurd nightmare ...

SoIf the USA is still perceived worldwide as supporters of the “old” model of the “new world order”, then China and Russia take into account the latest trends in the modern world and strive for partnership, and not hegemony on the scale of the globe. Today, when the crisis is baking the so-called developed countries, the world needs not a stale commodity called “American values”, but a life-saving medicine in the form of mutually beneficial cooperation is needed.