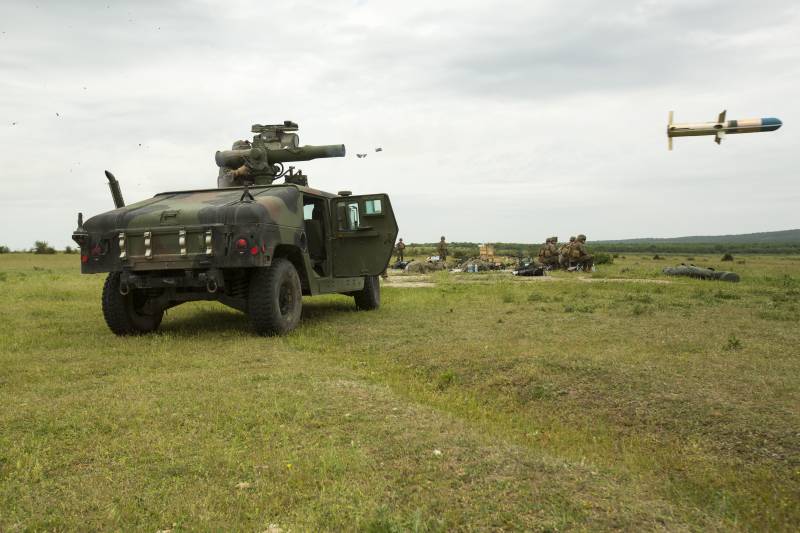 Self-propelled TOW. In Ukraine, these have already appeared. Source: avia.wikisort.org

In mid-August, the US government allocated $775 million to help Ukrainian nationalists. As Pentagon officials write, "to meet Ukraine's critical security and defense needs."

A lot of equipment was fished out of the storerooms of the military department. In particular, an unnamed number of HIMARS missiles, several 105-mm howitzers and 15 Scan Eagle reconnaissance drones.

It is important that the supply package included equipment for overcoming minefields - by the end of the summer, the nationalists were preparing for an offensive near Kharkov. The Pentagon sent 40 MaxxPro armored vehicles with anti-mine rollers and a host of light mine clearance systems, including the M58 MICLIC remote demining system. The Russian troops near Kharkov did not have time to close the dangerous areas with minefields, so the Armed Forces of Ukraine did not have much need for this equipment. What can not be said about other technology.

In the offensive package, you can find anti-tank missiles BGM-71 TOW, new to the Ukrainian theater of operations. Fifty armored Hummers left the Bandera in the same clip. After video and photographic evidence of TOW operations in Ukraine emerged in September, it became clear that the Americans had sent HMMWV M966 mobile launchers. Despite the fact that the majority of the military consider ATGMs to be a defensive advantage weapons, in this case, rocket carts can be used in the offensive. 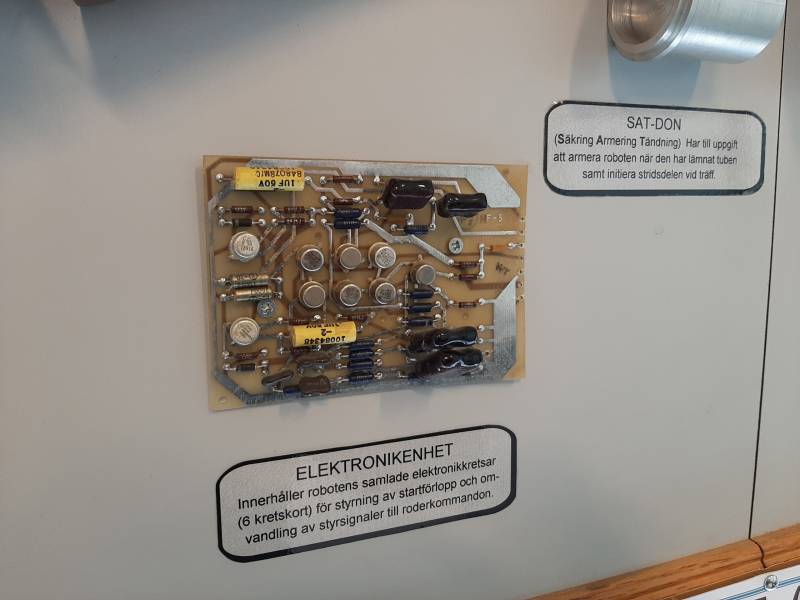 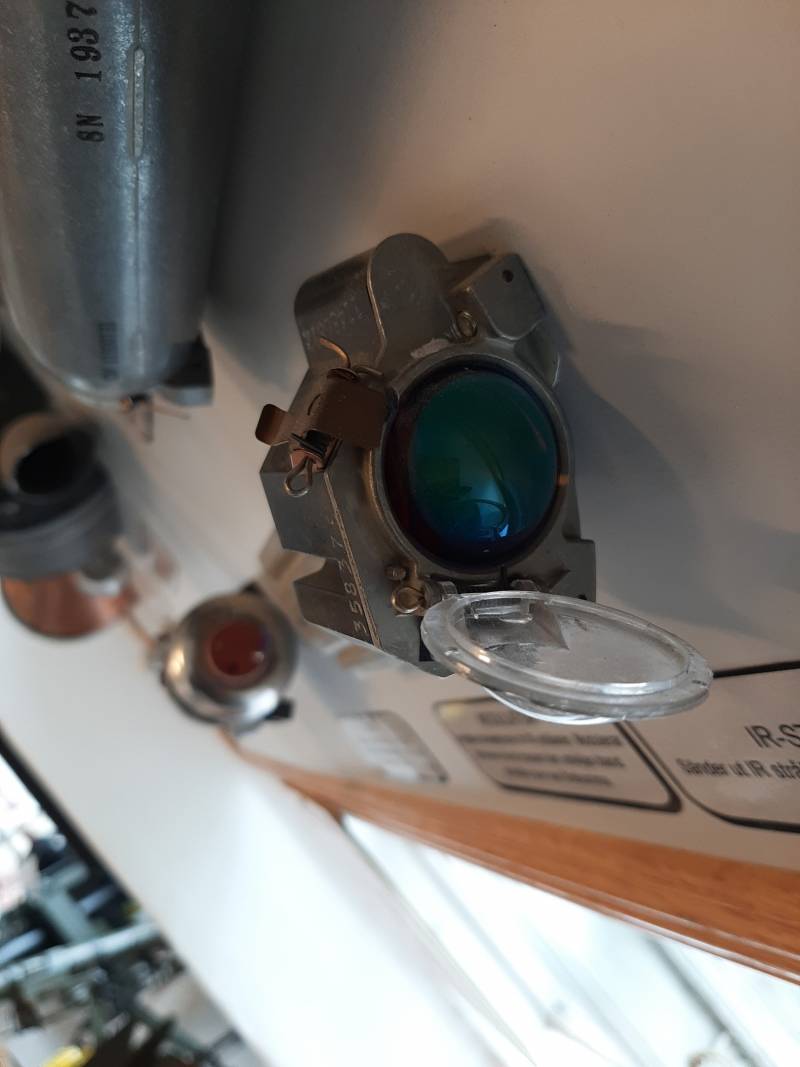 Filling TOW-2A in the Swedish Museum. Source: vk.com
At the same time, to call "Hammers" with anti-tank missile systems modern weapons does not turn the tongue. These 4,6-ton lightly armored vehicles can only work effectively on asphalt and hard ground. It is no coincidence that the latest laudatory videos by nationalists with the M966 in the main video end just at the beginning of the thaw in Ukraine. There is no evidence of the destruction of these vehicles by Russian troops.

Most likely, the vehicles were withdrawn from the line of contact until better times. These times will come no earlier than spring - with other versions of the BGM-71 TOW on the Hummers, it is used only as fixed firing points. A snow cover of several tens of centimeters, which will soon fall in the east of Ukraine, is impassable for armored cars.

The fact of the appearance of heavy anti-tank systems TOW, история development of which goes to the end of the 50s, says a lot. The Ukrainians began to miss the ATGM of their own design "Stugna-P". 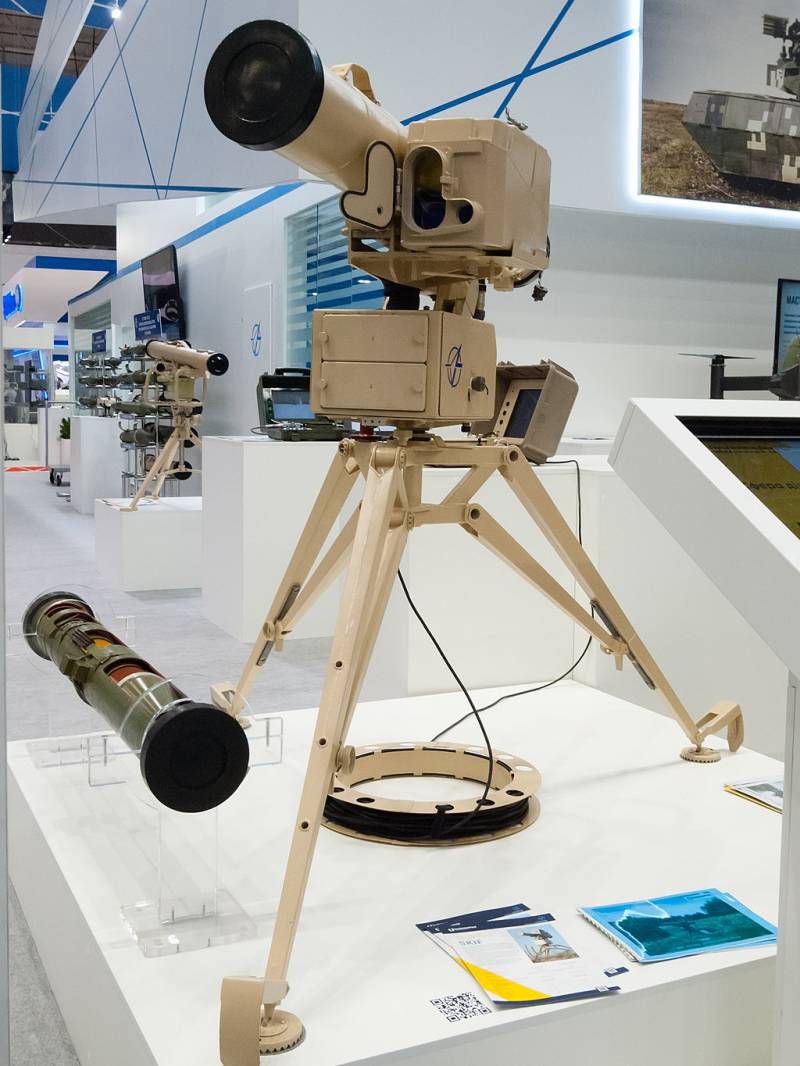 Stocks of "Stugna-P" were depleted (pictured), it's time for TOW. Source: en.wikipedia.org
According to open data, at the beginning of the special operation, the Armed Forces of Ukraine had two hundred installations with seven thousand missiles. If this impressive arsenal had to be supplemented/replaced with obsolete TOWs, then either Russian missile strikes against nationalist rear depots are still effective, or most of the vaunted Ukrainian ATGMs have gone into milk.

Theoretically, the losses could be compensated for by the FGM-148 Javelin, but the cost of each shot is close to 200 thousand dollars, which is excessive even for the wealthy American military. Therefore, instead of third-generation “fire-and-forget” complexes, heavy in every sense BGM-71 TOW, second-generation ATGMs with wire control, are sent to Ukraine. If the Javelin with the sighting system is estimated at almost half a million dollars, then the entire TOW is no more than 90 thousand.

Why is TOW dangerous?

How effective the American TOW is against Russian armor is well illustrated by the famous video of 2017, when Syrian militants attacked the T-90 with an anti-tank missile in the forehead of the tower. Then the tankers were saved by dynamic protection. It turned out to be a wonderful commercial for Russian armor. The T-90 met with a frontal projection a heavy missile, famous for armor penetration from 400-900 mm, depending on the modification.

Only the very first modifications of missile systems were limited to a single cumulative warhead; from the end of the 70s, a retractable probe with a leading funnel appeared on the nose of the missiles. Such tandem TOWs were developed specifically against Soviet, and later Russian, dynamic protection. That is why the importance of the American system on the Ukrainian front should not be underestimated.

At the moment, it is not known which version of the missile appeared at the front, so we proceed from the most pessimistic scenario. According to him, the nationalists ended up with BGM-71E missiles, that is, tandem missiles with a firing range of 3 meters of the 750 model. There is also a possibility that the Americans are getting rid of the early tandem versions of D and C, which were riveted with more than 1987 thousand copies of each.

The Pentagon also has exotic BGM-71Fs, but the currently available video from Ukraine shows classic HEAT warheads. Equipment on the other side of the screen is affected in frontal and frontal projections. The lethal effect of TOW on armored vehicles is quite high - each rocket carries about six kilograms of explosives with it. Nationalists may well use missiles not for their intended purpose, but to destroy manpower, bunkers and other fortifications. Something similar was demonstrated by anti-government groups in Syria. 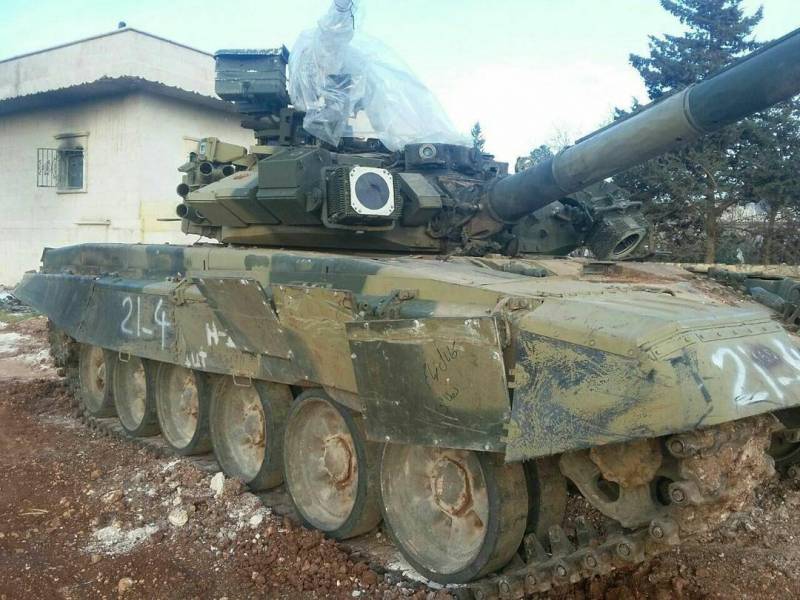 Under certain circumstances, Russian Tanks withstand a TOW hit. The photo shows a Syrian T-90, presumably after a meeting with an American ATGM. Source: vk.com
The most effective TOW, especially on wheels, will work on the southern front in the Kherson region. The flat steppe is ideal for launching missiles at distant targets. However, this also makes the installations easy prey for aviation and artillery.

Among the main advantages of TOW on Hummers is high mobility. Of course, within the capabilities of the base chassis. The stationary version on a tripod weighs almost a hundred kilograms, and it cannot be called mobile. As, however, and "Stugnu-P", which is distinguished by similar weight and size parameters. Bandera's solution to this problem was simple - they took the nearest civilian minibus and transported heavy anti-tank systems along the entire front under the guise of non-combatants.

A Ukrainian missile penetrates more than one meter of homogeneous armor, and the operator is at much less risk than a TOW user. It's all about the Stugnoy control panel placed on a 50-meter cord, which is why Bandera anti-tankers work with the installation at a distance or even from a bunker. ATGMs in this design are more difficult to detect, which means that they are located closer to the line of contact. And yes, the Ukrainian missile is controlled not by wire, like TOW, but by a laser beam.

In general, with all due respect to the American design school, the Ukrainians outperformed the overseas masters here. Just because the Stugna-P is actually the newest ATGM from the Kyiv side, its military history began in 2011. Even the Javelin is much older. 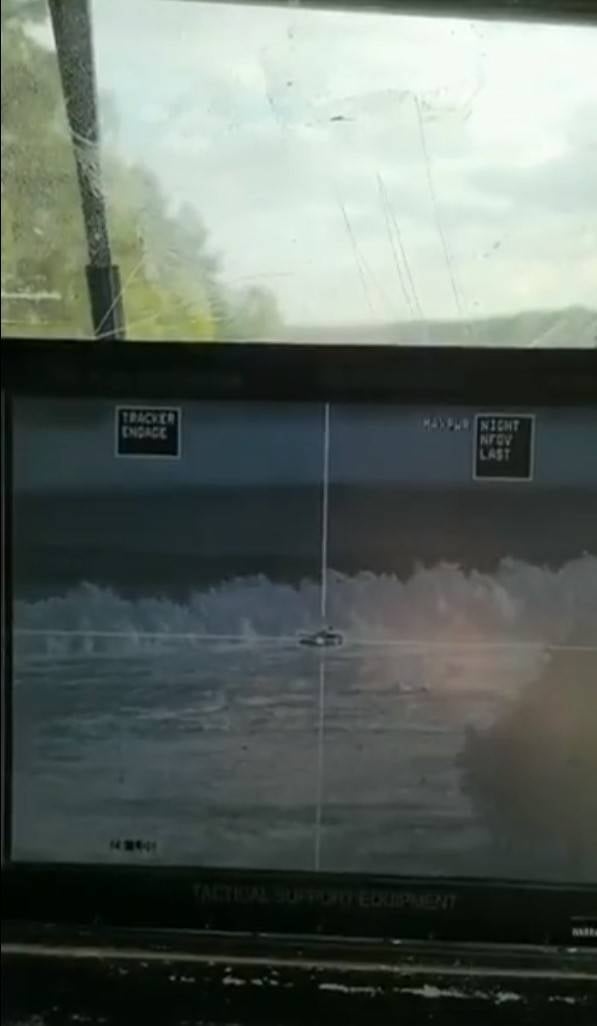 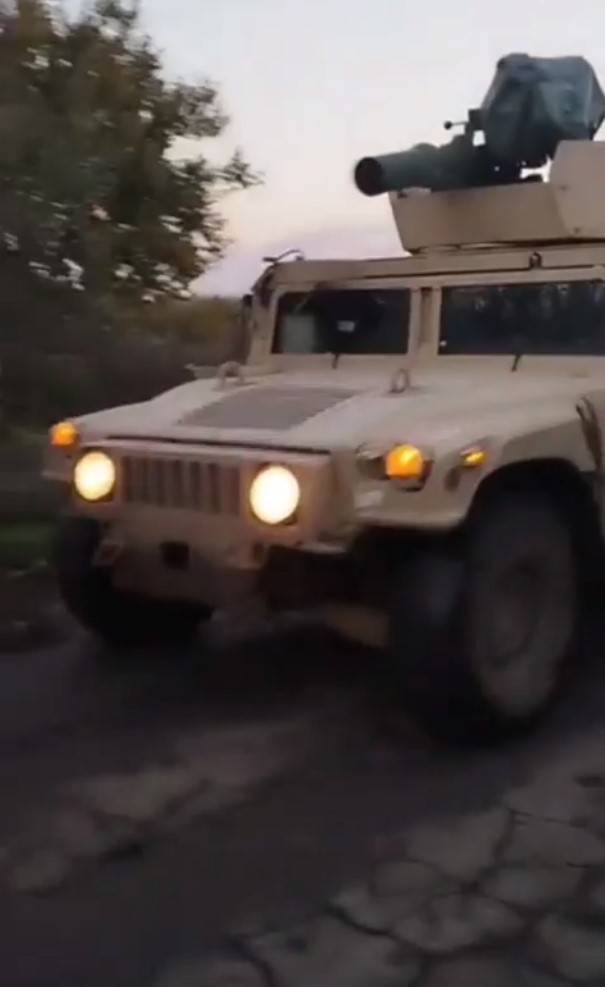 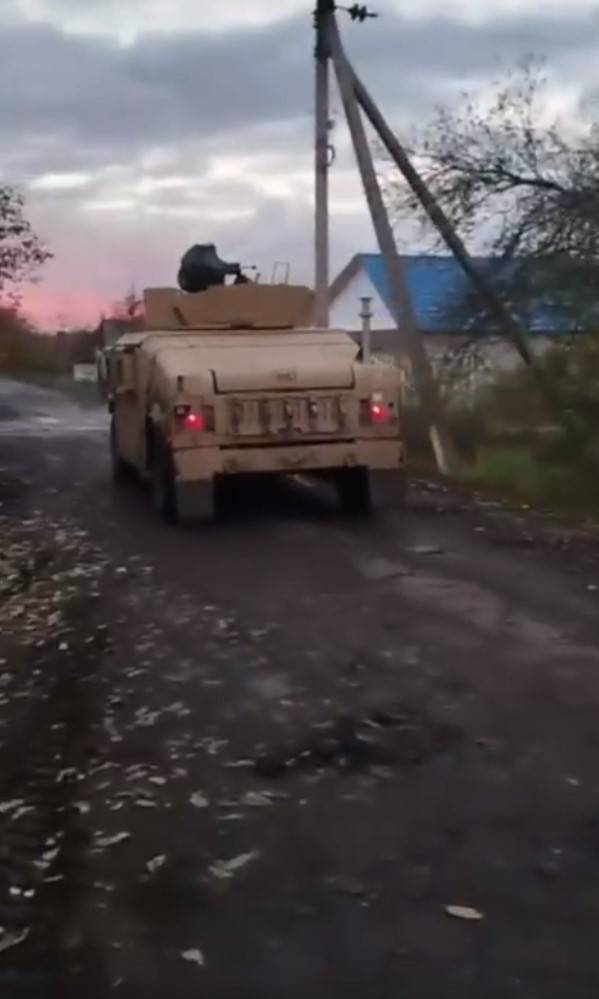 Evidence of the appearance of TOW on the Hummer chassis among the nationalists. Source: Telegram
The wheelbase of the Hammer offers certain conveniences to the calculation, especially since the car is armored from light small arms and shrapnel. But compared with the Russian Kornet-D complexes, the American Lend-Lease loses outright.

The platform of the all-terrain vehicle "Tiger" is distinguished by better cross-country ability and a high rate of fire due to automatic reloading. In addition, the TOW operator has to lean out to the waist on the roof for firing and manual reloading. There is no need to talk about what advantages the BMP-3 tracked platform provides for Kornet-T.

The onset of winter will seriously complicate the work of Ukrainian birders. At least those who chose to fight on Hummers with TOWs on the roof. And the point here is not only in the disgusting cross-country ability and mine resistance of vehicles. And in the snow cover, on which massive SUVs will be visible for several kilometers from the air. And for sighting thermal imaging systems of Russian aviation - even more. Three nationalists with a dismantled TOW will be in these conditions, if not more effective, then at least with a greater chance of survival.